Objective: This study aims to discuss the applied value of hemihepatectomy in combination with vascular resection and reconstruction in hilar cholangiocarcinoma.

Results: Among the 93 cases of hilar cholangiocarcinoma, the 25 cases with Bismuth IIIa, IIIb and IV hilar cholangiocarcinoma were subjected to hemihepatectomy in combination with vascular resection and reconstruction to achieve radical cure. Postoperative survival rates for one, two, three and five years were 52%, 28%, 12% and 8%, respectively.

Conclusion: The combined use of hemihepatectomy and vascular resection and reconstruction could increase the radical resection rate of hilar cholangiocarcinoma.

Hilar bile duct cancer remains one of the most difficult management problems in terms of staging and radical treatment. Surgical resection with complete removal of all cancer is the only chance for cure and long-term survival. Indeed, local or hilar resections, including that of the extrahepatic and supra-pancreatic biliary tract, have been reported to result in a high percentage (76%) of localized regional recurrence even after formal curative resections. Moreover, bile duct resection alone leads to high local recurrence rates and has low five-year survival rate because of the early involvement of the hepatic duct confluences and caudate lobe branches [1,2].

In theory, radical excisional therapy for patients with hilar bile duct cancer often necessitates extensive hepatic resection. Although many surgeons have emphasized the importance of hepatic resections, the percentage of patients who undergo major hepatic resection is still limited, presumably because of fear of the high incidence of liver failure associated with the said treatment.

In recent years, the surgical treatment for hilar cholangiocarcinoma has clearly progressed. As a result, surgical resection and survival rates have been significantly improved. In an innovative study of 59 patients with Bismuth III and IV hilar cholangiocarcinoma who underwent liver resection with curative intent, survival rates at one, three and five years were 82%, 45% and 20%, respectively [3]. In addition, for the last two decades, most centres have already adopted this approach, and the outcomes were better compared with that of the local resection only. Reported curative resection rate was at 70% with a five-year survival rate ranging from 10% to 40% [4-7].

A total of 15 patients were recruited in this study, including 14 males and 11 females, with an average age of 61.5 years (ranging from 45 years to 80 years). The initial clinical manifestations were as follows: painless jaundices (25 cases), skin itching (14 cases), anorexia (11 cases) and argil-like defecate (7 cases). The serum bilirubin level of this group was at 100.6 μmol/L to 546 μmol/L (mean 279 μmol/L), whereas the serum albumin level was at 31.5 g/L to 40 g/L (mean 33.5 g/L). Preoperative colour Doppler ultrasound and MRCP examinations were carried out in this study. On the basis of the results of the MRCP examination and according to the Bismuth classification, 14 cases were classified as Bismuth IIIa (common hepatic duct and right liver tube carcinoma, 56%), 8 cases as Bismuth IIIb (common hepatic duct and left liver tube carcinoma, 32%) and 3 cases as Bismuth IV (left or right liver tube carcinoma involving the liver tube of second level and above, 12%). This study was conducted in accordance with the declaration of Helsinki. This study was conducted with approval from the Ethics Committee of Zhangzhou Hospital Affiliated to Fujian Medical University. Written informed consent was obtained from all participants. 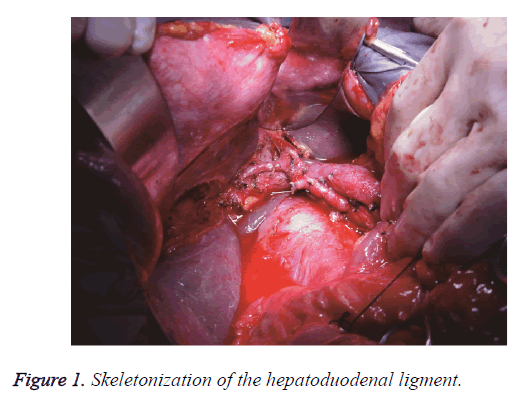 Figure 1. Skeletonization of the hepatoduodenal ligment. 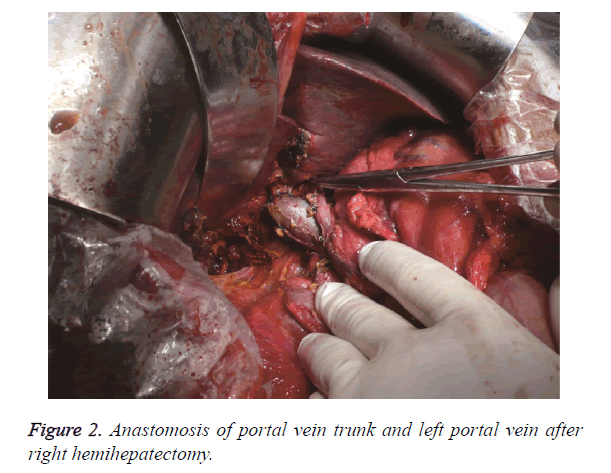 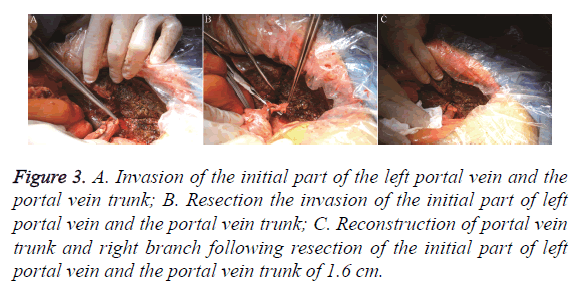 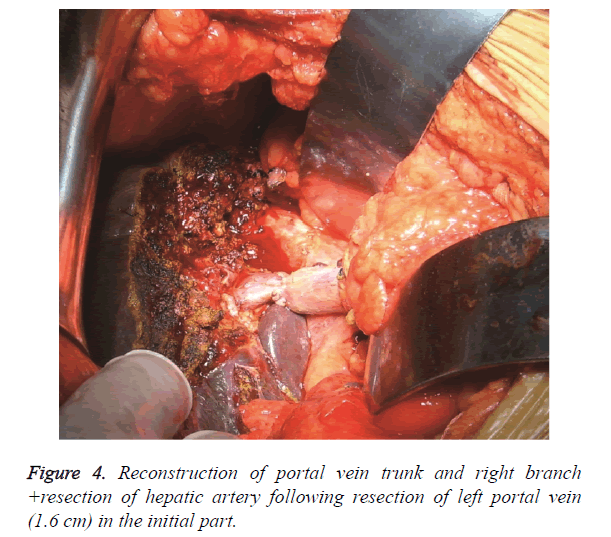 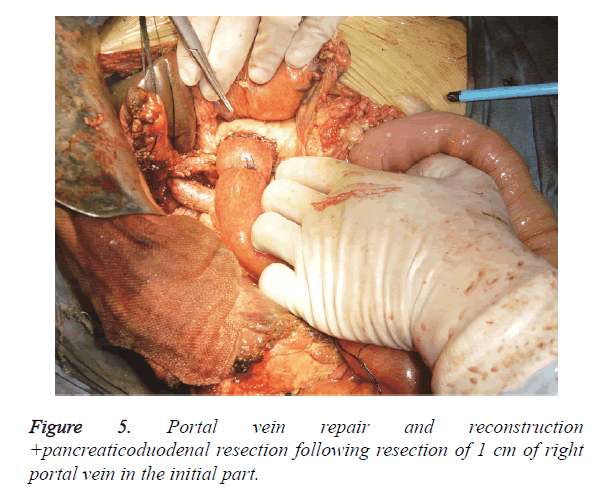 A total of 11 cases had postoperative biliary fistula (44%) and were all self-healed within 5 days to 25 days after operation. A total of 8 cases had subphrenic infection and were cured by drainage. No deaths occurred during hospitalization. Colour Doppler ultrasound examination was routinely conducted for six months after the reconstruction of the portal vein. At the first, second and fourth months, no portal vein stenosis or thrombus was observed. Liver failure was not detected in the patients subjected to hepatic artery resection. In this group, 2 cases received right hemihepatectomy+extrahepatic bile duct resection+pancreaticoduodenal resection+portal vein reconstruction and survived for nine months (Figure 5).

In all cases, the survival rates for one, two, three and five years were 52%, 28%, 12% and 8%, respectively. The average postoperative survival time was 13.5 months (with a range of 8 months to 48 months), and the cause of death was tumour recurrence.

Adenocarcinoma of the hepatic duct at its bifurcation (hilar cholangiocarcinoma) was defined by Klatskin [9]. The surgically resectable rate of hilar cholangiocarcinoma is low because of its difficult early diagnosis, the involvement of important structures at the hepatic hilium where the tumour is found, and the complicated regional anatomy. However, with the changes in cure viewpoint, the advancement of operation techniques and the renewed operation methods and procedures, the surgically resectable rate has been substantially improved since the 1990s, and even went up from 48.5% to 74% in the last decade [10-13]. Currently, surgical operation is still the main method for curing hilar cholangiocarcinoma and is still the only effective method to achieve radical cure.

Most studies reported that the resection methods are decided according to Bismuth classification [14,15]. Hilar cholangiocarcinoma is characterized by invasive growth and diffusion into the interspace of the lymphatic tissue around the bile duct, vessels and nerves. Skeletonization resection is the basic method used to cure hilar cholangiocarcinoma.

In recent years, with the better understanding of its biological characteristics and through the pathological and statistical analysis of large-scale cases, hilar cholangiocarcinoma is shown to be diffused along the intrahepatic bile duct, produced many satellite foci and diffused in the surrounding vessels, nerves and lymph vessels in its early stages before the surrounding connective tissues are involved [16,17]. The invasion scale of the hilar cholangiocarcinoma of hepatic bile duct is more serious than that of the duodenum. Thus, resecting the hilar bile duct tumour will result in a high residual tumour margin rate. In this study, hepatectomy of tumour invasion is recommended for hilar cholangiocarcinoma because this approach can increase the radical cure rate of the resection from 58% to 100% compared with the 38% to 45% of the nonhepatectomy. Resection of a quadrate lobe of the liver or part of the liver can expose the branch of hepatobiliary tube clearer, which makes this method convenient for the resection of the tumour and bile duct. However for the Bismuth IIIa, IIIb and IV types, resecting only a quadrate lobe of the liver or part of the liver is not enough. To achieve pathological radical cure (R0), trisegmentectomy of the affected liver should be conducted [18]. Among the 25 cases, 14 cases were subjected to right hemihepatectomy, whereas 11 cases were subjected to left hemihepatectomy. A total of 19 cases obtained negative resection margin (R0), whereas 4 cases had moderate to severe atypical hyperplasia, in which 2 cases had suspected cancer cells of mainly type IV. Given the invasive growth of the hilar cholangiocarcinoma, the vessels are always involved, such that resecting only the affected half liver will not achieve radical cure. The resection of the involved portal vein or hepatic artery is necessary to complete the resection of hilar cholangiocarcinoma. To increase the radical rate of tumour resection, the vessels should be resected and reconstructed [19]. In this study, intraoperative exploration showed that the portal vein and proper hepatic artery or its left and right branch experienced tumour invasion of varying degrees. Hemihepatectomy and vessel resection+reconstruction were carried out to achieve radical cure. Portal vein resection and reconstruction should be performed in cases with the following conditions [20]; 1) tumour invasion in the main portal vein; 2) invasion in the initial part of the left or right branch of the portal vein; and 3) invasion in the left and right bifurcation of the portal vein. The portal vein with tumour invasion appears as a venous wall that is becoming thick, stiff and hoar. If the invasion scale of the venous wall is below 2 cm, the tumour and part of the venous wall of the portal vein are resected. Subsequently, portal vein repair or reconstruction is performed. If the invasive scale of the venous wall is more than 2 cm, the autologous internal jugular vein or vascular prosthesis is used for portal vein reconstruction following the resection of the vessel. The indications for hepatic artery resection are as follows [20]; 1) Hepatic artery has tumour invasion and is surrounded by tumour; and 2) the tumour invasion scale of hepatic artery is more than 2 cm, the cavity is thinned, the wall is thickened and distal artery pulsatility is weakened. Patients with hepatic artery resection need to keep the portal vein expanded to avoid liver failure. In this group, 12 cases received hepatic artery resection and obtained satisfactory postoperative liver function recovery.

Combined liver, bile and pancreaticoduodenal resection is mainly used in patients with diffused cancer invasion in the bile duct of the pancreas and pancreatic head and belongs to hilar cholangiocarcinoma extended radical operation. This surgical method is feasible, but because of the significant surgical trauma and complicated technology, only few cases were reported [21-23]. Additional cases are needed to evaluate the curative effectiveness of the method. Hilar cholangiocarcinoma extended radical operation is commonly preferred over pancreaticoduodenal hemihepatectomy, hemihepatectomy, or liver transplantation. Some scholars are concerned about the extension of the surgical treatment to hilar cholangiocarcinoma because of the serious complications and high operation death rate of the procedure. Cautious use of this operation method should be done and the surgical complications should be considered to achieve radical cure resection. However, no reports are available on large-scale cases of the extended radical operation of hilar cholangiocarcinoma and on prospective comparison on the risk and effectiveness of the treatment. To improve the effect of the surgical treatment, extending the resection scale seems to be an inevitable trend, and frozen section examination during the operation is necessary. The operation must be carefully performed when the surgical condition, experience and adequate preoperative preparation are lacking.

Hilar cholangiocarcinoma is a type of polymorphism disease, and only a few cases present benign tendency. Along with the improvement of the surgical treatment, the perspective on the cure of this disease becomes optimistic, and the operation method becomes standardized. The surgical treatment can prolong the life span and improve the life quality of the patient. However, we are not certain whether the treatment has a longterm curative effect. If the local recurrence rate of the tumour is high, then the long-term survival rate becomes low. Patients with hilar cholangiocarcinoma who were subjected to radical resection survive longer than those subjected to palliative resection (incomplete resection) [24]. Among the 25 cases, 52% (13/25) survived for one year, 28% (7/25) survived for two years, 12% (3/25) survived for three years and 8% (2/25) survived for five years. We must pay active surgical attitude towards the hilar cholangiocarcinoma. In addition, tumour invasion into the portal vein is not an operative contraindication as long as we carefully perform preoperative evaluation and select the right patients. In cases with Bismuth IIIa, IIIb and IV types of hilar cholangiocarcinoma, we applied hemihepatectomy combined with vessel resection +reconstruction and even radical operation to extend the surgical resection scale and to improve the radical curative effect.