The volatile oil of the coffee husk of Coffee arabica (Rubiaceae) was obtained by GCMS. This oil showed quorum sensing inhibition activity which were investigated for antipathogenic potential against P. aeruginosa (PAO1). The results showed that significant inhibition on the production of virulence P. aeruginosa and Biofilm Formation (BF). Moreover, the treatment with sub-MICs of coffee husk oil significantly inhibited the quorum sensing-mediated BF, extracellular polymeric substances production and swarming motility in these pathogens. Wide-spectrum in vitro inhibition of QS controlled virulence factors such as violacein, elastase, pyocyanin, EPS and biofilm in test pathogens was determined.

Coffee arabica is one of the most popular food commodities in the world [1]. The huge production and consumption of coffee generates large volumes of residues such as coffee husks [2]. Coffee husk is a mucilaginous fibrous substance containing tannins, caffeine, and phenolic compound [3-5]. Also, some studies showed that coffee husks is rich in protein, carbohydrates, organic matter [6,7] and chemical nutrients such as nitrogen and potassium [8], which makes it perfect substrate for the production of benefit products [9]. Commercially coffee husk have been used as fermented tea, food supplements, and animal feed [10]. Furthermore, very recently coffee husks are reported to be the potential source of antimicrobial and antioxidant activities [11]. In the current paper our focus on Coffee husk, an agro- and food industry wastes that can be utilized as valuable and cheap sources of antimicrobial compounds.

The fresh coffee husks of C. arabica were collected from the Kholan (Bin Amer region of AbdulAziz Al-Melahe Farm (Sana'a, Yamane), northern border of Saudi Arabia. The plant material was identified and authenticated by Dr. Mahmoud Abdul Aziz Mahmoud,and a voucher specimen (PDH#437) has been deposited at the herbarium, college of pharmacy, King Saud University, Riyadh.

Air-dried husks (100 g) obtained from C. arabica were subjected to hydrodistallation for 3-4 h using an all glass Clevenger-type apparatus as described by Al-Yousef et al. [11], to obtain essential oil 0.31% v/w. A total of 55 components were analysed in the essential oil and were identified on the basis of GC retention time and comparing with Wiley library 2006 as well as comparison the fragmentation patterns of their mass spectra with those reported in the literatures [11,15,16] and various of the identified components were identified as sesquiterpenes, amides, phenolic, fatty acids, sterols, alkanes furanol, compounds and alcohols [11].

C. violaceum CVO26 (a mini-Tn5 mutant of C. violaceum 31532 that cannot synthesize its own AHL but responds to exogenous C4 and C6 AHLs) and P. aeruginosa PAO1 (C4 and 3-oxo-C12 HSL producer, McLean et al., 2004), bacterial strains were used for the study [17]. Luria-Bertani (LB) medium were used to grow all bacterial strains at 30°C for 24 h. When needed, the medium for C. violaceum CV026 was supplemented with hexanoyl homoserine lactone (C6-HSL; Sigma-Aldrich, St Louis, MO, USA).

Broth macrodilution method was used to determine MIC of the test agents against C. violaceum CVO26 and P. aeruginosa PAO1 [18]. Assessment of anti-virulence and anti-biofilm activity in the above test strains were carried out by sub-MICs.

Production of violacein by Chromobacterium violaceum (CVO26) in presence of sub-MICs of test agents was studied by extracting violacein and quantifying photometrically using method of Blosser and Gray [19], with little modifications by Husain et al. [20,21]. From each flask, 1 ml of culture was taken up and centrifuged for 10 min at 13000 rev/min to precipitate out the insoluble violacein. The supernatant of culture was discarded and 1 ml of DMSO was added to the pellet. In order to completely solubilize violacein, the solution was vigorously vortexed for 30 s and centrifuged for more 10 min at 13000 rev/min to remove the cells. 200 μL of supernatants (violacein-containing) were added to 96-well flat bottomed microplates/ four wells per each solution and the absorbance was read with a microplate reader at 585 nm wavelength. Reduction in the production of pigment in the presence of test agents was measured in terms of (%) inhibition as, ((OD of control-OD of treated)/OD of control) × 100.

Effect of sub-MICs of test agents on virulence factors of PAO1 such as LasB elastase, pyocyanin, swarming motility, extracellular polymeric substances (EPS) extraction and quantification was assessed as described previously [11,20].

The effect of test agents on biofilm formation was determined by using the microtitre plate assay of O’Toole and Kotler, [22]. Briefly, 1% overnight cultures (0.4 OD at 600 nm) of test pathogens were added into 1 ml of fresh LB medium in the presence and the absence of sub-MICs of test agents. Bacteria were allowed to adhere and grow without agitation for 24 h at 30°C. After incubation, microtitre plate was emptied by removing the media along with free-floating planktonic cells and the wells were gently rinsed twice with sterile water. The surface-attached cells (biofilm) were stained with 200 μL of 0.1% crystal violet (CV) (Hi-media, Mumbai, India) solution. After 15 min, CV solution was discarded completely and wells were filled with 200 μL of 95% ethanol to solubilize CV from the stained cells. The biofilm biomass was then quantified by measuring the absorbance at OD 470 nm in a microplate reader (Thermo Scientific Multiskan Ex, India).

Hydro-distillation of C. arabia husks resulted in isolation of essential oil comprised of fifty five components, which were identified by GC-MS, as reported in our previous study and also the isolated oil have shown significant antibacterial and antioxidant activities [11]. As a continuation of our research [11] on the base of biological screening of obtained essential oil, the present study describes the QS and biofilm inhibitory properties (BI) of coffee husks oil against pathogenic bacteria using the reporter Chromobacterium violaceum CVO26. The coffee husks oil inhibited growth against pathogens, 500 μg/ml for CV O26 and 800 μg/ml for PAO1. So, in the current study sub-MIC concentrations (50-600 μg/ml) of coffee husks oil were used for further assays. The purple pigment (Violacein) production in CVO26 is a QS regulated process and its production is organized by CviIR-dependent QS system. In the current study, coffee husks oil inhibited violacein production in wild-type CVO26 strain in concentration dependent action without affecting the population of the bacteria. Maximum significant reduction of 56% (P ≤ 0.05) was recorded at 400 μg/ml while at lower concentrations (50-200 μg/ml) 11-38% decrease in violacein was recorded (Figure 1). This dosedependent manner of coffee peel oil on violacein production is in accordance with the reports on Indian medicinal herbs [23], Capparis spinosa and Cuminum cyminum extracts [24]. 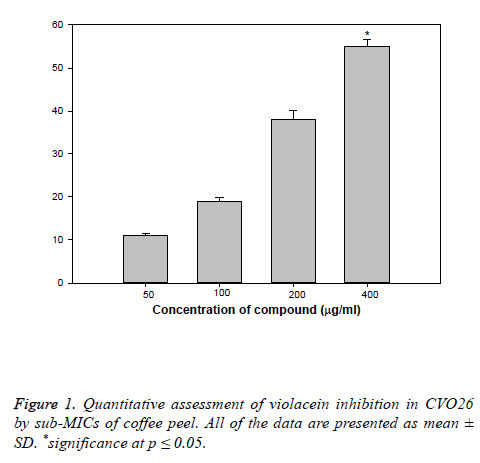 Figure 1: Quantitative assessment of violacein inhibition in CVO26 by sub-MICs of coffee peel. All of the data are presented as mean ± SD. *significance at p ≤ 0.05.

Effect of coffee peel oil on virulence factors of PAO1 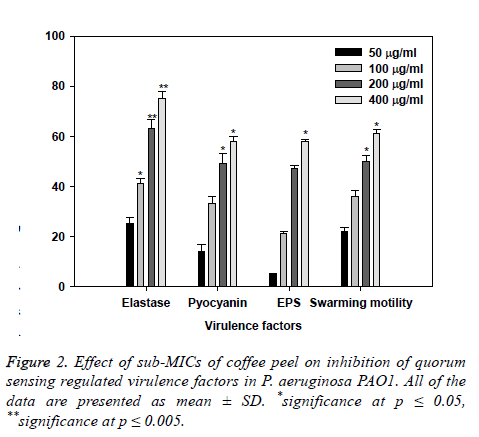 Production of pyocyanin (PP, blue colored) is regulated by QS [27]. Pyocyanin and its precursor phenazine-1-carboxylic acid (PCA) cause neutrophil apoptosis and impairs neutrophilmediated host defense [28]. Coffee peel oil at sub-lethal concentrations exhibited considerable decrease in the PP by PAO1. The maximum significant reduction of 50% and 59% (p ≤ 0.05) in production of pyocyanin was recorded at highest two tested concentrations (200 and 400 μg/ml) followed by 12% and 32% at 50 and 100 μg/ml concentration, respectively (Figure 2). Our results are in agreement with the results of recent reports [29-31] demonstrated that extracts of Tinospora cordifolia (stem) and S. aromaticum (bud) reduced PP significantly.

Swarming motility and exopolysaccharide production by P. aeruginosa plays a pivotal role in the initiation, maturation, and maintenance of the biofilm architecture [32,33].

Biofilm is a drug resistant complex aggregation of microorganisms and is a key factor in the pathogenesis of P. aeruginosa [35]. In a biofilm adherent cells become embedded within a slimy extracellular matrix that is composed of EPS. Biofilms are the cause of severe persistent infection and BF is considered as one of the potential drug targets to combat drugresistant chronic infections [36,37]. The coffee peel oil showed 9, 29, 53, and 65% decrease in the BF ability of PAO1 at 50, 100, 200, and 400 μg/ml of extract concentration, respectively (Figure 3). Our observations find support from previous experimentation on BI in PAO1 by polyphenolic extract of South Florida plants [38], Lagerstroemia speciosa fruit extract [39], Rosa rugosa [40], standardized extract of Sclerocarya birrea [41], Trigonella foenumgraceum seed extract and Mangifera indica leaf extract [42]. 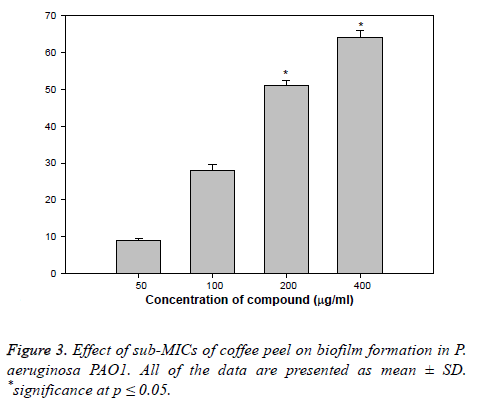 Figure 3: Effect of sub-MICs of coffee peel on biofilm formation in P. aeruginosa PAO1. All of the data are presented as mean ± SD. *significance at p ≤ 0.05.

Coffee peel oil is known for its uses and our study appends an additional note on its QS and BI properties against pathogenic bacteria. The current study demonstrates that coffee peel oil could inhibit the QS initiate virulence factors production in C. violaceum and P. aeruginosa. Moreover, the treatment with sub-MICs of coffee peel oil significantly inhibited the QSmediated BF, EPS production and swarming motility in these pathogens. Wide-spectrum in vitro inhibition of QS controlled virulence factors such as violacein, elastase, pyocyanin, EPS and biofilm in test pathogens was determined. Thus, these results postulated that coffee oil has powerful anti-infective properties and could confirm to be an effective anti-QS and antibiofilm agent against pathogens.

This research project was supported by a grant from the “Research Center of the Center for Female Scientific and Medical Colleges”, Deanship of Scientific Research, King Saud University.