T. crispa is a well known traditional medicinal plant used in India, Indonesia, Philippines and Malaysia. To date, there are numerous studies on this plant emphasizing it’s antioxi-dant, antidiabetic, antimalarial and cosmetic effects. However, limited informations are available regarding T. crispa cytotoxicity potential. The objectives of this study were to de-termine the cytotoxicity potential and antioxidant activity of different T. crispa crude ex-tracts. Viability of cells was measured using the MTT assay on MCF-7, MDA-MB-231, HeLa and 3T3 normal fibroblast cells while antioxidant activity was determined by measur-ing total flavonoid content, total phenolic content and DPPH free radical scavenging activ-ity. Results obtained showed that the cell viability decreased in a dose-dependent manner in all cancer cells for each extract. The lowest IC50 (33.75 ± 4.65 μg/ml) was observed in MCF-7 using the methanol extract. Further more, there were significant differences for total pheno-lic content (p<0.01, df=2, X2=9.836) and flavonoid content (p<0.05, df=0.02, X2= 7.20) be-tween each extract with the methanol extract having the highest activity for both phenolic (255.33 ± 10.79 mg GAE/g sample) and flavonoid content (9.53 ± 0.50 mg QE/ g sample). The DPPH assay showed that the methanol extract had highest scavenging activity in a dose-dependent manner where the IC50 value was 12 μg/ml. T. crispa has a dose-dependent antiproliferative activity against many types of cancer cells where the lowest IC50 was pre-sent in the methanol extract on MCF-7. Further more, methanol crude extract of T. crispa had higher total phenolic and flavonoid content and free radical scavenging activity com-pared to water extract and chloroform extract.

Cancer is characterized by uncontrolled growth of cells that can cause by many factors such as exposure to UV light, certain chemicals [1] and imbalance between oxi-dant and antioxidant [2]. Novel anticancer agent is one of the important treatments to fight against cancer instead of the surgery and radiotherapy [1].

Malaysia is known for its biodiversity with many plants possessing medicinal value [3]. T. crispa is known as ba-tawali or seruntun in Malaysia, bratawali and andawali in Indonesia, makhamukay in Philippines and boraphet in Thailand. It had been used as traditional medicine in rural society to treat fever, cholera, snake bites, rheumatism and fever due to malaria [4]. T. crispa has shown to have an antihyperglycemia effect by augmenting the release of insulin [5]. Its antimalarial activity [3], antibacterial [6], anti-inflammatory [7] and anti-oxidant properties [4] are also recorded. Recent study by Chantong et al. [8] showed that T. crispa has cytotoxic effect on P19 embryonal car-cinoma cells. The cytotoxicity activity of plants might be due to the antioxidant activity or the presence of active compound such as alkaloid. The measurement of different extraction solvents produced valuable information about the antioxidant activity of different type of T. crispa crude extracts. This study was designed to measure the cytotox-icity and antioxidant properties in different type of T. crispa crude extracts

The raw plant materials (stems) were obtained from a village in Chenor, Pahang, cut into small pieces, dried and ground into powder. The powder was soaked in water, methanol or chloroform overnight at room temperature. The water, methanol and chloroform extractions were filtered and the filtrates were evaporated with a rotary evaporator. Then the dried residues were stored at -80°C until used for cytotoxicity testing and antioxidant deter-mination.

MCF-7, MDA-MB-231, HeLa and 3T3 cell lines were cultured in RPMI 1640 supplemented with 10% of FBS, 100 IU/ml of penicillin and 100 μg/ml of streptomycin using 75-cm2 flasks, in humidified incubator with 5% CO2 and 95% air at 37°C. Cells were harvested when it reached 70% confluent and 1 x 105/ml were plated onto a 96-well plate and incubated overnight to allow the cells to attach to the well. The medium was discarded and 100 μl of the working solution, which was diluted with the me-dium to yield the final concentrations of the test solutions ranging from 10 - 100 μg/ml were added into the well and incubated for 72 hours. As a control, cells were cultured in 100 μl of medium, while for positive control cells were cultured in the presence of tamoxifen which the concen-trations were similar to extracts. All treatments were done in replicates of six. Viability of the cells was determined using MTT assay according to manufacturer’s instruc-tions (Roche Diagnostic). The results were recorded as IC50 value which is the concentration of sample that in-hibits 50% of tumour cells growth.

The total phenolic content of T. crispa extract was deter-mined by using Folin-Ciocalteu method [9] where 200 μl of samples (1 mg/ml) were added into the test tube fol-lowed by 1.5 ml of Folin-Ciocalteu’s reagent (diluted 10 times) and allowed to stand at 22oC for 5 minutes in the dark. Then 1.5 ml of NaOH (6% w/v) were added and were incubated for 90 minutes before absorbance were measuring at 725 nm. Total phenolic content was meas-ured as gallic acid equivalents (GAE) in 1 g material.

The DPPH method [11] was followed by adding 100 μl different concentrations of the T. crispa extracts ranging 10 - 100 μg/ml (in triplicate) to 5 μl of DPPH (5 mg/2 ml methanol). DPPH solution was then allowed to stand for 20 min before absorbance was measured at 517 nm. Spec-trophotometric measurements was made using methanol as blank. Antioxidant activity was expressed as IC50 (inhibitory concentration in mg/ml of plant material nec-essary to reduce the absorbance of DPPH by 50%). Vita-min C was used as positive control.

Data were expressed as mean ± standard deviation. Kruskal Wallis test was used to compare mean of each group. Probability levels of less than 0.05 were taken as statistical significance. 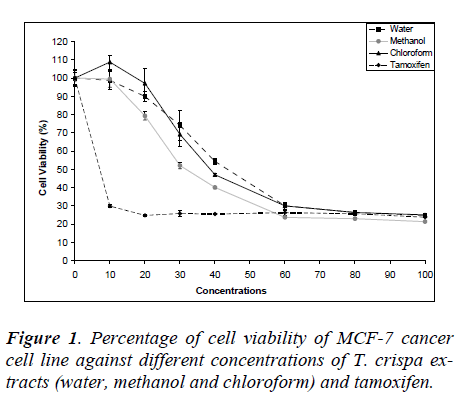 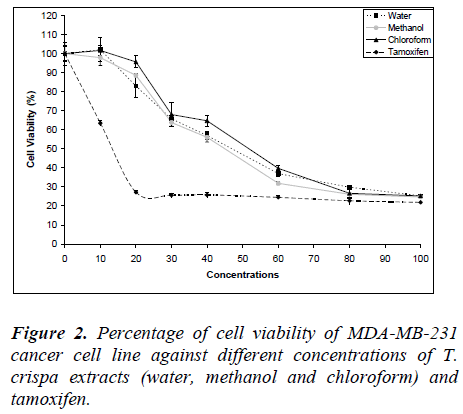 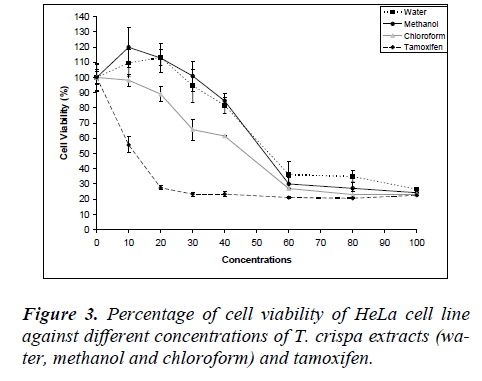 Fig. 4 shows the MDA-MB-231 cell viability on various T. crispa extracts (water, methanol and chloroform) and tamoxifen as control. The cell viability was decreased in dose-dependent manner where the IC50 were 65.50 ± 4.64 μg/ml, 57.50 ± 6.47 μg/ml and 52.58 ± 2.25 μg/ml for water, methanol and chloroform extracts, respectively. The IC50 values for 3T3 normal fibroblast cell were higher compared to all cancer cell line for each extract. 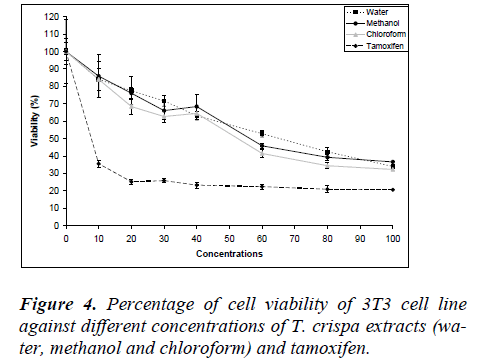 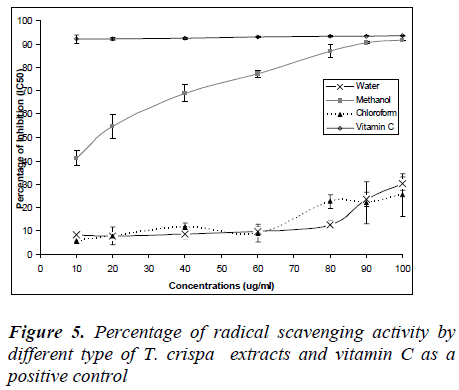 Figure 5: Percentage of radical scavenging activity by different type of T. crispa extracts and vitamin C as a positive control

In this study, the purpose of testing different types of T. crispa extracts was to determine the best extraction method of T. crispa that provides the strongest antiprolif-erative effect against cancer cell lines and antioxidant activity. The antiproliferative activity was measured us-ing MTT assay where it is based on the reduction of a soluble tetrazolium salt by mitochondrial dehydrogenase activity into soluble colored product which could be measured by spectrophotometer. The IC50 values obtained from the viability graph were used as parameter for cyto-toxicity where it refers to 50% of cells inhibited by the plant extract [13].

Different type of extraction methods contributes different active compounds of T. crispa due to polarity of the sol-vent. Regarding in vitro study on anti-malarial activity, chloroform extract of T. crispa provided best result com-pared to methanol extract [3]. Similarly in this study, methanol extract gave the best IC50 value compared to water and chloroform extracts in MCF-7 and MDA-MB-231 but not for HeLa cell. Cisplatin and tamoxifen are well established human anticancer drugs and have been used to treat cancer [14]. In this study, we used tamoxifen as a positive control and each T. crispa extract showed similar pattern of cell viability curve compared to that of tamoxifen.

Each extract showed that cell viability decreased in a dose-dependent manner in all types of cancer cells and normal cell. Most plant extracts show that their effects depend on time and the dose [15]. However, the IC50 ob-tained for 3T3 normal fibroblast cell was relatively higher than that of MCF-7, MDA-MB-231 and HeLa cells. The IC50 of 3T3 appears different from that in some animal cells where T. crispa extracts failed to produce any toxic effects even up to a concentration of 1 g/ml [16]. The IC50 values in this study were also found to be lower than those reported recently in HepG2, Caov-3, MCF-7 and HeLa cancer cells but not normal HUVEC cell using aqueous extracts [17]. Methanol extract of T. crispa againt MDA-MB-231 and MCF-7 had lower IC50 which showed the potential antiproliferative effect. The antipro-liferative effect of T. crispa might be due to its chemical substances especially alkaloids, which are known to have anticancer properties [4].

Flavonoid is plant pigment which has antioxidant activity through scavenging or chelating process and their effects on human nutrition and health are substantial [18]. AlCl3 was used in this measurement because it is specific for total flavonoid which consists of flavanols and flavones compared to the other method for example by using 2,4-dinitrophenlhydrazine which is specific for flavanol only [12]. For total flavonoid content, the value for methanol extract was found to be 3.6 folds compared to water and and 1.8 fold to chloroform extract, respectively. Results showed that methanol extract had higher phenolic and flavonoid contents compared to other study which had reported low association between phenolic and flavonoid content [12].

Our results clearly showed that the solvent used during extraction did affect the total phenolic content, flavonoid and free radical scavenging activity. Methanol extract of
buckwheat showed highest antioxidant activity when se-quentially extracted with hexane, diethyl ether, ethyl ace-tate and acetone [20]. Determination of antioxidant activ-ity using different methods and extraction media lead to different observations. A combination of several tests could give a more consistent judgment of the antioxidant activity [20]

In conclusion, T. crispa has a dose-dependent antiprolif-erative activity against many types of cancer cells where the lowest IC50 is found to be present in the methanol ex-tract on MDA-MB-231 breast cancer cells. Further more, methanol crude extract of T. crispa showed higher total phenolic and flavonoid content and free radical scaveng-ing activity compared to water extract and chloroform extract. Further studies are needed to elucidate the me-chanism of cell death caused by T. crispa extract.