Sophocarpine is an herbal compound obtained from foxtail-based sophora seeds and herbs, and is found to have various clinical applications in Chinese herbal medicine. This study was aimed to determine the anticancer properties of sophocarpine against human prostate cancer cells PC93, TSU-Pr1 and their molecular mechanisms involved in anticancer activity. The cytotoxicity assay indicated that sophocarpine markedly inhibited cell proliferation against prostate cancer cells in a concentration and time-dependent manner. Further, TUNEL and flow cytometry results demonstrated that sophocarpine treatment may trigger apoptosis in a concentration dependent way. In addition, the western blot experiments revealed a significant increase in expression of Bax and p53 and significant reduction in Bcl-2 expression in a concentration dependent manner. In vivo studies determined that sophocarpine hinders tumour progression following subcutaneous injection of cancer cells into nude mice. The results indicated that the anticancer properties of sophocarpine are through the inhibition of cell proliferation and inducing apoptosis mediated through the regulation of apoptosis related protein expressions. Hence, the results may pave for new approach in prostate cancer therapy using sophocarpine.

Prostate cancer is the second most common type of cancer which can cause death among men world-wide [1,2]. At present, the observation and recognition of prostate cancer growth are performed with the help of digital rectal inspection, evaluating prostate-specific antigens and examination of prostate needle biopsies using histopathology [3,4]. Treatment of prostate cancer with the available drugs is not that effective. Hence, the exploration of potential and novel effective drugs to cure prostate cancer is need of the hour [5]. It has been reported that androgen suppression therapy is used for prostate cancer patients in metastatic phase but they always develop progressive ailments [6]. Based on the duration of survival rate of the patient when administered with combination of mitoxantrone and prednisone in metastatic prostate cancer patients with castration resistance [7-9], a mixture of prednisone and docetaxel is considered as classic chemotherapeutic treatment. Unites States Food and Drug Administration (FDA) did not approve this combination of drugs, because the cancer cells start to grow again for patients after the treatment of docetaxel.

Sophocarpine, a tetracyclic matrine-type quinolizidine moeity belongs to the sophorae alkaloid. It can be isolated from foxtail like herbs of sophora and their seeds. The structure of sophocarpine is identical with Kushen alkaloids and is used widely in Chinese traditional medicines. The plants with genus name Sophora can be found from both tropic and temperate regions in the world. Only few of these herbs are used as essential sources in Chinese medicine. Sophocarpine is found to contain various therapeutic, pharmacological and biological properties such as anti-cancer, anti-nociceptive, antiinflammatory, anti-virus and immunoregulating agent [10-14]. Several reports showed that sophocarpine is participated in the maintenance of TLR4 [15], cytokine balance [16] and pathways of NF-κβ [17,18].

The anticancer property of sophocarpine was carried out by administering the patients with positive-enterovirus using sophocarpine of six to eight mg/kg a day for at least three to four hours. This was continued for three to four weeks and then compared with controls without treatment [19,20]. The analysis results indicated that concentration dependent reduction in the virus multiplication in patients treated with sophocarpine. Reports showed that low cost sophocarpine exhibited minor poisonous side-effects and broad distribution in tissues, in vivo [19]. Several studies indicated that sophocarpine has the ability to suppress inflammatory response in cells in vitro, endotoxin inactivation and regulation of inflammation [21-23]. Further, it is an efficient compound to be used as a therapeutic agent for the treatment of myocarditis and anti-hepatitis B caused by virus [20,24]. Also, therapeutic and preventive measures of sophocarpine were also revealed by experiments conducted on non-alcoholic steatohepatitis and the results showed that sophocarpine could reduce the non- alcoholic steatohepatitis [25]. Sophocarpine was utilized in regulating inflammatory functions by hindering the pathways of AMPK and NF-κβ [26,27]. However, no studies were conducted regarding the effectiveness of sophocarpine in prostate cancer to date and hence, we decided to study the anticancer properties of sophocarpine in prostate cancer cell lines.

MTT assay was used to determine the cell viability. Human prostate cell lines PC93, TSU-Pr1 and normal cell line RWPE-1 were cultured at 1000 cells per well in 96-well plates. After the cells were grown for 24 h, various sophocarpine concentrations (0, 1, 2, 5 and 10 mg/ml) were added and incubated overnight. After incubation, 6 mg/ml of MTT reagent was added and kept for 2 h incubation at 37°C. A 96- well microplate reader (Sunrise, Tecan, Switzerland) was used to record the absorbance at a wavelength of 480 nm.

The human prostate cancer cell lines were treated with different concentration of sophocarpine (0, 5 and 10 mg/ml) and incubated for next 72 h. The cells were trypsinized and followed by centrifugation at 1000 x g. Then, PBS was used to wash the pellets thrice. Annexin V-FITC/PI was used to detect the apoptotic cells and this was performed with the help of apoptosis detection kit based on the manufacturer’s instructions (Sigma Aldrich, St. Louis, USA).

This experiment was performed after getting the approval from institutional ethics committee. The in vivo xenografts study was conducted using BALB/c nude mice within 6-8 weeks of about 19-21 g were maintained in a Specific-Pathogen-Free (SPF) environment. Cell lines (PC-93) at a density of 2 × 105 were suspended in PBS (100 μl). The mice were injected subcutaneously into left axilla and after five days, a total of 24 tumoral mice were classified into three groups. One group was kept as control which was treated only with PBS whereas the other two groups were given different dosages of sophocarpine of about 50 and 100 mg/kg. Sophocarpine was given to mice as intraperitoneal injections. The formula A × B2 × π/6 was used to calculate the tumour volume in which A represents the length of longest feature of the tumour and B indicates the tumour’s length perpendicular to that of A. Mice were treated for 8 weeks, sacrificed and then tumour weight was calculated.

In vivo experiments were conducted on tumour affected mouse models using BALB/c mice to demonstrate the cell apoptosis. TUNEL assay kit obtained from Roche diagnostics (Indianapolis, IN, USA) was used to perform this analysis. In this experiment, apoptotic cells were identified by noticing brown nuclei and the total apoptotic cell counts per thousand cells was measured in each group. The microscope used to view each field is IX53 from Olympus Corporation (Tokyo, Japan) at a magnification of x200.

All the obtained data are expressed as mean of ± SD. IBM SPSS Statistics (IBM Technologies, USA) was used to perform the statistical analysis. Analysis of variance was used to make the comparisons between the different sets. Values of P<0.05 was considered to point out a statistically remarkable difference. 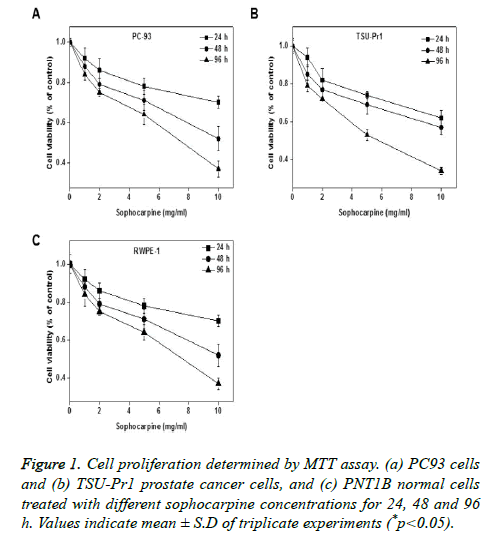 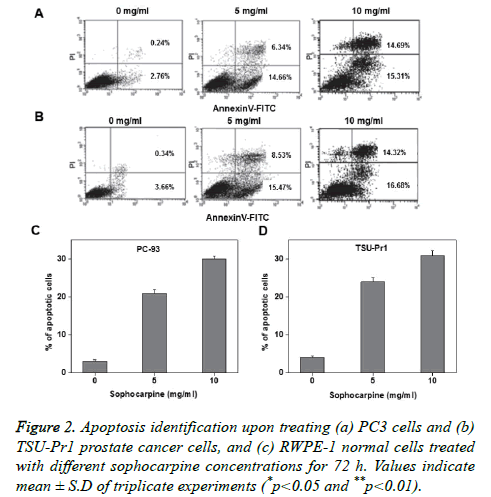 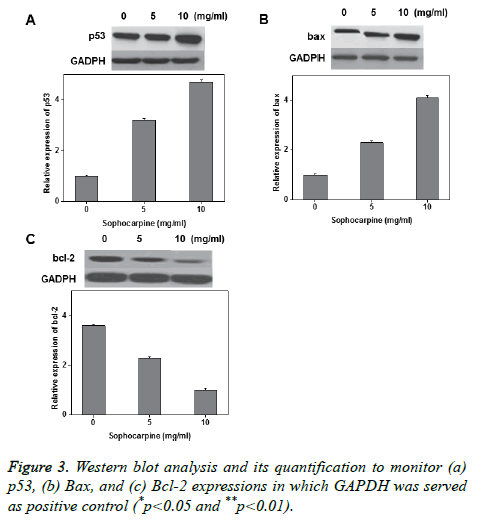 In vivo reduction of cell proliferation

To know the sophocarpine effects on cancer growth in vivo, 3 different sophocarpine dosages were injected intraperitoneally into nude BALB/c mice using PC-93 subcutaneous xenografts. The obtained results showed that upon sophocarpine treatment, the tumour volume and tumour weight of mice markedly reduced in a concentration dependent fashion (Figures 4A and 4B). The concentration dependent increase in the total apoptotic cell counts was measured through TUNEL assay (Figure 4D). These results supports that sophocarpine can influence the reduction of prostate cancer cell development by inducing cell apoptosis, in vivo. 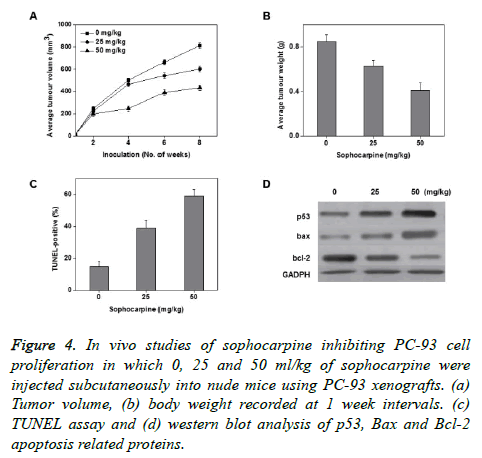 Cell death process, apoptosis is identified by the cellular and molecular processes including cell shrinkage, condensation of chromatids, externalization of phosphatidylserine etc., [33,34]. Cancer formation and progression is associated with uninhibited cell proliferation. Hence, induction of apoptosis furnishes a powerful mechanism for the improvement of anticancer therapies [35,36]. In our current study, treatment of sophocarpine triggered cell apoptosis on prostate cancer in a concentration dependent manner, in vitro. This was further analysed using TUNEL assay and flow cytometry experiments. Apoptosis is associated with different signalling pathways and various molecular markers participating in these signalling pathways have also been determined [37-39]. For instance, in multi-cellular living things, apoptosis and cell cycle maintenance are correlated with p53, concealed by the tumour protein 53 gene [38,39]. During external and internal inducements including infections caused by virus and oxidative stress, p53 can trigger or repress different target genes which are participated in apoptosis including p53, Bax and Bcl-2 [40,41]. Bax participated in a p53 maintenance pathway. p53 assembles in the cytosol and helps to advance Bax expression which helps to permeate mitochondria and assist apoptosis [42,43]. Bcl-2 is involved in avoiding the mitochondrial damage and obstruct the release of cytochrome c from mitochondria [44,45]. The data obtained from the current study revealed that treatment of sophocarpine on prostate cancer cells may end up in an increase in expression of Bax and p53 and reduction of Bcl-2 expression, in a concentration dependent manner. Collectively, the experimental results demonstrated that sophocarpine is a potential drug candidate to regulate the apoptosis related protein expressions in prostate cancer cells PC93, TSU-Pr1 both in vitro and in vivo.

In conclusion, the experimental results obtained revealed that sophocarpine displayed anticancer characteristics in human prostate cancer cells PC93, TSU-Pr1 both in vitro and in vivo. In addition, the observed results proved that anticancer potential of sophocarpine can be correlated to the inhibition of cell proliferation as well as induction of apoptosis. These observations can support a novel access for improvement of prostate cancer, using sophocarpine which is obtained from the genus Sophora.

The present study was supported by the Affiliated Zhong Shan Hospital of Dalian University and all the authors would like to thank them for their assistance to complete our work.