Medicinal plants are as assumed as major source for active constituents which are used for development of drugs. There are about half million plants around the world, and most of their medicinal activities have not explored yet [1]. According to WHO, about 80% of world population relies on plant based conventional medicines especially for their primary health care need [2]. It was a common perception on the basis of tradition, that there is no harm in the uses of natural medicinal plants [3].

The medicinal plant Swertia chirata (Roxb.) Buch-Ham. ex C. B. Clarke belongs to the family gentianaceae. Its folk use names are Chirata, Chareta, and chirayta. It is being used in different remedies as antipyretic and anthelmintic [4] and in arthritis [5]. It is also used for gastrointestinal and urogenital tract disorders [4]. This plant is also being used traditionally for treatment of cancer [6].

The objectives of present study were to prepare crude methanolic extract and its different fractionations obtained from the aerial parts of Swertia chirata and evaluate their phytochemical, antioxidant, antimicrobial, cytotoxic, and antileishmanial potential.

Extract preparation and its fractionation

Swertia chirata plant material was collected from Galyat region of Khyber Pakhtunkhwa, Pakistan and identified by the taxonomist and verified by comparing with available literature and herbarium specimens. The specimen was deposited in the herbarium and given the voucher number “PAC1009”.

The aerial parts of the plant material were shade dried, crushed into fine powder. The powdered plant material (4.3 kg) was macerated in methanol (10 L) for 10 d. Methanolic extract was filtered through muslin cloth and filter paper and dried under reduced pressure for further analysis.

Fractionation of methanolic extract (RA-16) was carried out by using gravity column chromatography. For column packing, slurry of silica gel (400 g) prepared in chloroform was poured into it, chloroform was further added with continuous tapping to develop the column and methanolic extract was applied slowly on the top. The solvent systems of 5% CH3OH/ AHCl3-10%, 15%, and 20% CH3OH/AHCl3 were run and different fractions were collected, labeled as RA-12, RA34, RA-56, RA-78, RA-91, RA-112, RA-13, RA-14, and RA-15.

The procedure used to determine the total phenolic contents, using Folin-Ciocalteu reagent [7]. The absorbance of reaction mixture was recorded at 715 nm. Gallic acid was used as standard and total phenolic contents were express as gallic acid equivalent. In addition, the method utilized for evaluation of total flavonoid contents was aluminium chloride colorimetric method [8]. The absorbance of the reaction mixture was taken at 415 nm. Quercetin was used as a standard and flavonoid contents were expressed as quercetin equivalent. The experiments were repeated in triplicate.

The antioxidant activities of crude methanolic extract and its fractions were determined by using DPPH free radical scavenging assay, as described previously [9]. The absorbance was taken at 517 nm by micro plate reader and scavenging percentage was calculated. The experiment was performed in triplicate. Ascorbic acid was used as a positive control, whereas methanol was used as a negative control.

The antibacterial activity of each fraction was determined by using disc diffusion method [10] using three strains of bacteria. One strain Micrococcus luteus was gram-positive while two strains Bordetella bronchiseptica and Salmonella typhi were gram-negative. The inoculum of each bacterium was spread smoothly on surface of sterilized solidified nutrient agar media present in the petri plate. Then 5 μl of each fraction was loaded on autoclaved filtered paper discs and placed on the respective places in the petri plates. Each plate contained two disc of positive and one disc of negative control. The plates were incubated at 37°C for about 24 h. The zone of inhibition (mm) was measured and assay was performed in duplicate.

The antifungal activity of each plant fraction was evaluated by using disc diffusion method [11]. Three different fungal strains were used, which were Mucor specie, Aspergillus fumigates, and Aspergillus niger. After solidification of sterilized sabouraud dextrose agar media in the petri plate, inoculum of each fungus was swabbed on its surface to produce the lawn. Then 5 μl of each fraction was loaded on filter paper disc and each disc was placed on its respective place in labeled plate. Each plate contains two disc of positive and one disc of negative control. The plates were then incubated at 28°C for 24 h. After incubation, zones of inhibition were measured and experiment was performed in triplicate.

The cytotoxic effects of all fractions were measured by using brine shrimp lethality bioassay [8]. Three concentrations of each fraction (1000 μg/ml, 100 μg/ml, and 10 μg/ml) and three concentrations of standard drug were prepared (10 μg/ml, 1 μg/ml, and 0.1 μg/ml). 96 plate was used for this assay and 250 μl of sea water was added to the well so that the sample was dissolved in the sea water. Then 10 shrimps (Artemisa salina) were transferred to each well. The volume of the wells was raised up to 300 μl to attain desired concentration of each well. The plates were incubated for 24 h at room temperature. Then shrimps were taken from each well and counted the survivors under magnifying glass. The lethal dose of crude fractions against brine shrimps was calculated by using Finny software.

Pre-established Leishmania tropica KWH23 strain was incubated at 24 ± 1°C for 6-7 d in 199 medium containing 10% fetal bovine serum. The in vitro antileishmanial assay was performed according to the protocol previously described previously [12] with a slight modification. Stock solution of each fraction (4,000 ppm) was prepared by dissolving 4 mg in 1000 μL of distilled water. The stock solutions were serially diluted in 96 well plates. Positive and negative control was Amphotericin B and distilled water, respectively. The microtiter plates were incubated at 24°C for 72 h. The experiment was performed in triplicate. After 72 h, about 15 μl of test culture were then transferred to improved neubauer counting chamber and live promastigotes were counted under light microscope. For LC50 calculation, probit regression analysis of SPSS Ver. 21 was used. 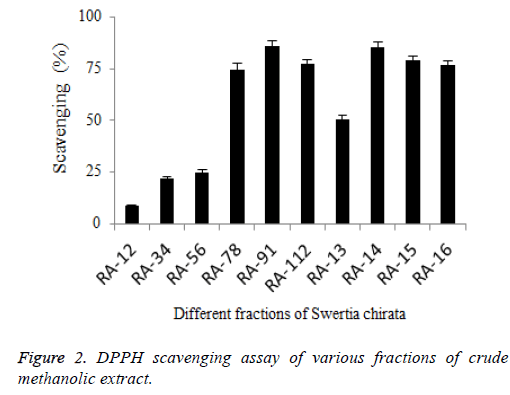 All fractions did not show any activity (Table 1) against Salmonella typhimurium. However, RA-112, RA-13, RA-14, RA-15 and RA-16 were active against Micrococcus luteus. The encouraging activities were shown by all fractions against Bordetella bronchiseptica. These results are contrary to the results in which methanolic extract prepared from bark, fruits and leaves of Ficus microcarpa was used and high antibacterial activity was reported [17].

Table 1. Antibacterial and antifungal activity of crude extract and its fractions.

Five fractions (RA-78, RA-91, RA-112, RA-13, and RA-14) were slight active against Aspergillus niger (Table 1). However, all fractions have shown significantly (P<0.05) results against Mucor species where RA-56 showed highest inhibition followed by RA-91. Comparative fungal growth inhibition cause by all fractions against Aspergillus fumigatus was highest. Fraction RA-14 showed highest growth inhibition in the present antifungal study. Our results are better than those published in another study performed previously [16].

In brine shrimp lethality assay, LD50 value lower than 1000 μg/ml is considered cytotoxic [18]. Three fractions RA-12, RA-34 and RA-78 showed the best cytotoxic results with zero LD50. The other significant results were obtained by the fraction RA-13 with 16.54 μg/ml LD50 and by fraction RA-112 with 17.37 μg/ml LD50 (Table 2). On correlation of our work with brine shrimp lethality of Artemisia dubia extract, our all fractions showed encouraging cytotoxic activities [8].

All fractions were also subjected to antileishmanial activities and found positive against leishmaniasis disease (Figure 3). The best results were shown by fraction RA-78 and RA-112 with 0% survival of Leishmania parasite. The second best results were shown by fractions RA-16 and RA-91 by 12% survival rate. Amphotericin-B used as a standard drug against Leishmania protozoa. The results of current study were quite better than the previous work done by in vitro assessment of anticutaneous leishmaniasis activity of Sudanese plants [19,20]. 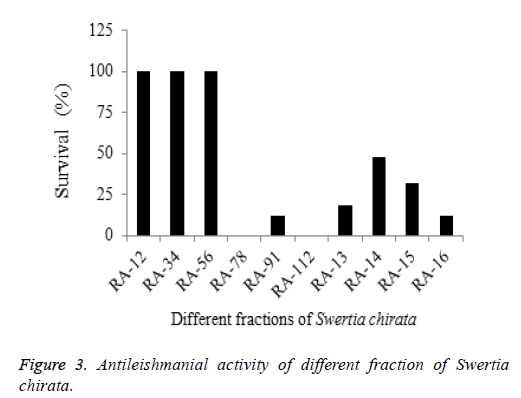 It can be concluded that various fractions of methanolic extract prepared from the aerial parts of Swertia chirata promisingly possess various chemical and biological properties including antioxidant, antimicrobial, brine shrimp cytotoxic, and antileishmanial activities.