We here in report the anti-cancer and kinases inhibitor activities of some substituted indole derivatives 1-10. which were synthesized and evaluated as analgesic and anticonvulsant agents before. Ten compounds were conveniently screened for their in vitro cytoyoxicity against a wide rannge of cell lines; these compounds showed potent activities against ovarian and breast cancer cell lines. The in vivo antiovrian cancer and anti-breast cancer of the most active in vitro compounds were estimated and founded highly potent. In search for the mechanism of action of anticancer activities it was found that these compounds exert their action via Topoisomerase II inhibition and inhibition of BRAF600E.

Indole derivatives are important class of therapeutic agents in medicinal chemistry including privileged scaffolds [1,2], anticancer [3], antioxidant [4], antirheumatoidal and anti-HIV [5,6] and also play a vital role in the immune system [7,8]. On the other hand, indole carbohydrazide had been used as starting materials for the synthesis of a number of indole derivatives containing pyrazoles derivatives and evaluated as potential antitumor activity [9]. Azatoxin "NSC 640737-M; 5.R,11aSlH, 6H,3-one-5,4,11,11a-tetrahydro-5-(3,5-dimethoxy-4- hydroxyphenyl)oxazolo(3',4':l,6)-pyrido[3,4-b]indole" was rationally synthesized from a model for the pharmacophore of drugs with Topoisomerase II inhibition activity [10]. Also a new series of indole, pyrimidine, and benzimidazole heterocyclic derivatives were synthesized as anticancer activities against liver cancer cell line HEPG2 [11]. In addition, some of furyl, thienyl, pyridyl, phenyl at 2- and 4-position of 5H-indeno[1,2-b]pyridine and 2-(1H-imidazol-2-yl) pyridine derivatives were evaluated for Topoisomerase I and II inhibitory activity, cytotoxicity against several human cancer cell lines [12] and BRAF kinase inhibitory activities [13]. In view of these observations and in continuation of our previous work [14-21] in heterocyclic chemistry and their pharmacological activities, herein we reported the anti-ovarian and anti-breast cancers with dual Topoisomerase II / BRAF600E inhibitors activities of some substituted indole derivatives.

The tested compounds 1-10 were illustrated by physical and spectroscopic data which were reported by Abd El-Latif et al. [22].

SKOV-3, MCF-7, HL60, HeLa, HT1080, HepG2 and SK-MEL- 28 cells were supplied by American Type Culture Collection (Rockville, MD). Culture-cells were grown in RPMI-1640; all supplemented with 10% heat inactivated fetal bovine serum (FBS), 1% penicillin-streptomycin and 2 mm L-glutamine. DMEM was also supplemented with 0.01 mg/ml insulin and 1mm sodium pyruvate. Cells were grown up in a 5% CO2 humidified incubator at 37°C and passaged bi-weekly. According to McCauley et al. [23] the cytotoxicity of the tested compounds was measured against cancer cell lines using standard MTT assay, which depends on the reduction of the soluble MTT “3-(4,5-methyl-2-thiazolyl)-2,5-diphenyl-2H-tetrazolium bromide” into a blue-purple formazan product. This reaction results from the mitochondrial reductase activity inside living cells. The results were expressed as the IC50, which induce a 50% inhibition of cell growth of treated cells when compared to the growth of control cells. Each experiment was performed at least 3 times. The standard deviations were less than 10% with confidence interval 95%.

In vivo antiovarian cancer of the tested compounds evaluated following the adopted method [24]. The studies followed the approval of the ethical committee guidelines 50-01-05-08B ((University of South Dakota, USA). Briefly, immunedeficient female mice (Harlan) with 6-8 weeks old and having ~23 gm were s.c. inoculated with an appropriate concentration of logarithmically growing SK-OV-3 cells at the right and left flanks. After development (tumor volume reaches ~50 mm3), three animal groups of 10 animals each were formed. A s.c. implants (Innovative Research of America) loaded with 1 μm/gm of tested compounds, placebo or control were injected with the help of 10-gauge precision trochar. Afterwards, at constant time intervals, both tumor size and animal weight were determined. After 40 days, the animals were sacrificed, measured, excised, and the tumor was fixed in 4% paraformaldehyde, and embedded in paraffin for histologic studies. Tumor volume (in mm3) was determined measuring both diameter and width of the tumor. Statistical variation in the measurements was taken into consideration.

In vivo antibreast cancer of the tested compounds evaluated following the adopted method [25]. Approval protocols and guidelines from the ethical committee were strictly followed. Breifly, female athymic pathogen-free nude mice (4-6 weeks) were used to establish MCF-7 human breast cancer xenografts. The mice were s.c. injected with logarithmically growing MCF-7 cells at an appropriate concentration (total volume 0.2 ml) into the left inguinal area of the mice. Tumor growth and size were measured using a caliper measurement in two perpendicular diameters and the volume of the tumor was determined. Again, tested compounds (dissolved in PEG400:ethanol:saline (57.1: 14.3: 28.6, v/v/v), were i.p. administered at 5 and 10 mg/kg/d, 3 d/wk for 3 weeks. Control animal groups were only injected with the vehicle.

The effects of the tested compounds on Topoisomerase II were evaluated following the adopted method [26]. In brief, purified Topoisomerase II was used to relax the supercoiled pBR-322 DNA under inhibitor (test compounds) effect at assay conditions. Afterwards, electrophoresis was performed to the samples at standard conditions and the DNA was stained with ethidium bromide.

The experimental method which was used in In vitro ELISA-based kinase assay has been adopted from Jie et al. [28]. The standard protocol was followed. The expressed GST MEK-His was bound to the well pre-coated with and the test compounds were added. Accordingly, the mixture was incubated at 37°C for 30 min. to start the kinase reaction, and then the reaction was stopped. Goat anti-rabbit IgG (H+L)-HRP conjugate was added followed by the substrate. The screening performed for the compound inhibition depended on high throughput protocols in 384-well plates.

Some of substituted with indole moiety, such as pyrimidine, pyridine and thiazolopyrimidine derivatives 1-10 (Figure 1) were produced in advance and evaluated as analgesic and anticonvulsant agents [22]. Herein, due to aspects of stereochemical and conformational similarity of tested compounds and some clinical used 5α-reductase inhibitors these compounds were evaluatedfor their 5α- reductase inhibitors activities. 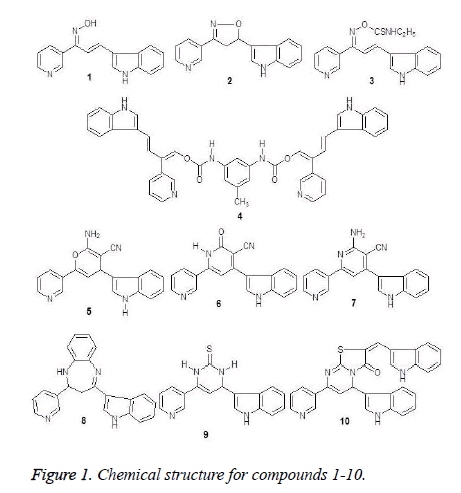 The cytotoxicity of the tested compounds against cancer cell lines in vitro was performed with the MTT assay according to the Mosmann’s method. All the tested compounds showed potent cytotoxic activities in vitro against SKOV-3, MCF-7, HL60, HeLa, HT1080, HepG2 and SK-MEL-28 at micro molar level (Table 1). The potent activities of the tested compounds were against SKOV-3 and MCF-7, followed by HL60, HeLa, HT1080 and HepG2 cells. On the other hand, SK-MEL-28 was the least affected cell line. It can be generally concluded that the cytotoxic effect of all tested compounds was compound-and cell line-dependent. This can be explained due to the increasing in number of indole moieties in the synthesized compounds. Moreover, the dependence cytotoxic effect on the cell lien has been previously reported [30-32]. This can be explained on the differences in cell morphology and membrane structures among difference cell lines.

The in vivo anti-ovarian cancer activities of the tested compounds against SK-OV-3 tumors were estimated and culminated on the tested compounds exerted potent antiovarian activities in the following descending order 10, 9, 8, 7, 6, 4, 3, 2 and 1 (Fig. 2). These compounds strongly reduced the ovarian tumor growth ratio (Vt/Vo) in comparison to the placebo. Considering the most potent compounds (10), the obtained results showed that the implanted compound reduced the tumor growth by about 53% after 5 days of implantation. The reduction percentage of the tumor growth ratio increased gradually with increasing implantation time, and consequently the compound release, where the reduction percentages recorded 70.8, 75.3, 79.4, 84.2, 86.8, 87.9 and 87.5% after 10, 15, 20, 25, 30, 35 and 40 days of implantation, respectively. 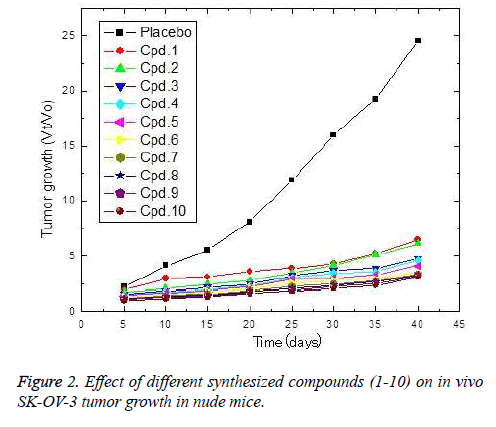 The in vivo anti-breast cancer activities of the tested compounds were estimated and culminated on the tested compounds exerts potent anti-breast carcinoma in the same descending order 10,9,8,7,6,4,3,2 and 1 (Figure 3). Where theses compounds strongly decreases the breast tumor growth Vt/Vo than that of placebo. The obtained results showed that compounds 1-6 started to exert their cytotoxic effect on tumor cells only after 6 days. On the other hands compounds 7-10 showed a reduction in tumor growth after 2 days of implantation. The most active compounds (10) resulted in a 21% reduction in tumor size growth after 2 days of implantation. Furthermore, the reduction percentage increased to reach 38.1, 73.1, 84.3, 80.1, 86.1, 82.8, 79.7, 82.6 and 80.1% after 4, 6, 8, 10, 12, 14, 16, 18 and 20 days of implantation, respectively. 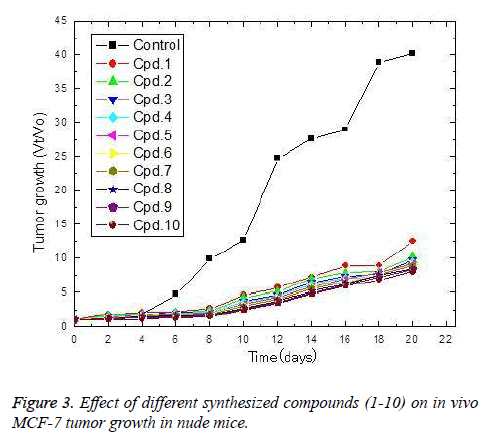 In search for the mechanism of action of the anticancer activities of the tested compounds the author's resorts to many in vitro assays for many targted enzymes and cancer modulation molecules, these experiments revealed on the following two mechanstic pathway.

In search for the mechanism of action of anticancer activities of the tested compounds several proposals had been investigated and studied. Among these, the synthesized compounds were mainly active against Topoisomerase II, and showed significant inhibition for the enzyme activities. All the tested compounds inhibited the enzyme Topoisomerase II in the following descending order 10, 9, 8, 7, 6, 4, 3, 2 and 1 (Table 2). From the data presented, it can be clearly observed that Cpd. 10 inhibited the Topoisomerase II activity, and the IC50 value was 0.33 nm. Moreover, the IC50 values required to inhibit the enzyme activity increased with decreased the number of indole moieties in the synthesized compounds (order 10 to 1) by about 1.3-, 1.7, 1.9, 1.9, 2.0, 2.18, 2.24, 2.3 and 2.4-folds for Cpds. 9, 8, 7, 6, 5, 4, 3, 2 and 1, respectively.

The in vitro kinase assay of the synthesized compounds was investigated against both WTBRAF (BRAF kinase wild type) and V600EBRAF (mutant BRAF kinase) (Table 3). All compounds were highly active inhibitors for V600EBRAF, while showing moderate inhibiting activity against WTBRAF. The descending order of activities was as follow 10, 9, 8, 7, 6, 4, 3, 2 and 1. Again, Cpd. 10 was the most potent and showed IC50 values of 0.0023 and 0.15 nm for V600EBRAF and WTBRAF, respectively. Similarly, the IC50 values obtained for the synthesized compounds increased in the same order of compound activity. The IC50 values obtained for Cp. 1, being the least effective, increased by about 5.8- and 19.3-folds for V600EBRAF and WTBRAF, respectively. Our results are in good agreement with those previously reported by Stones et al. [29]. The authors analyzed and compared the responses of different human melanoma cell lines to different NRAS and BRAF inhibitors and determined the corresponding IC50 values. They found that some of their investigated cell lines with BRAF mutation were sensitive to CI-1040, which is a generally applied as an inhibitor for MEK kinase. Furthermore, they concluded that MEK inhibitors have a potential for their inhibiting effect against some human melanomas.

• Pyrimidine nucleus and diazepene moities play important roles in increasing the activities but the role of pyrimidine is higher than that of diazebene.

• The effects of various moities on the activities were of the following descending order pyrimidine, diazepene, pyridine, pyran and five membered heterocyclic.