#These authors contributed equally to this paper

The synthesis and characterization of four novel pyran derivatives (1-4) were realized by means of IR, 1H NMR, HRMS, and single crystal X-ray crystallography. The anti-osteosarcoma activities of the four compounds were investigated against three human osteoma sarcomatosum cells (HuO9, 143B and MG-63) by MTT assay. It has been found that compounds 3 and 4 exerted much more potent activities against the three cell lines than the other two compounds.

According to the statistics, nearly 7 million lives die from different kinds of cancer every year in the world, the high fatality rate of cancer makes people turn pale at the mention of it [1]. Moreover, the evidence showed that the treatment of metastatic cancer cannot achieve the desired effect only by surgery or radiation, or even combining surgery with radiation. As a result, much more attention has been paid on conventional chemotherapy to cure cancer [2], while this type of treatment could cause severe side effects for it usually fails to differentiate between normal cells and tumor cells. In the last decade, the adoption of molecular targeted therapies plays an important role in blocking the growth of tumor cell by interfering with specific receptors and signaling pathways, which is a new generation of selective cancer drugs that has made treatments more tumor-specific [3,4].

A Brucker Equinox-55 spectrophotometer IR was used to capture IR spectra (400-4000 cm-1). 1H NMR spectra and Mass spectra were captured by using a Varian Inova-400 spectrometer (at 400 MHz) and a micrOTOF-Q II mass spectrometer respectively. A XT-4 micro melting apparatus was made use of measuring the melting points, and the thermometer remained uncorrected.

Synthesis and characterization of compounds 1-4

The synthesis of compounds 1-4 were on the basis of a reported procedure [8]. Refluxing the mixture of mdihydroxybenzene (10 mmol), benzaldehyde (3- methoxybenzaldehyde, 4-bromobenzaldehyde and 3- cyanobenzaldehyde) (10 mmol), malononitrile (10 mmol) and 4-(dimethylamino)pyridine (DMAP) (1 mmol) in ethanol (100 mL) for 2-3 h and then cooling to room temperature. Through filtering the precipitates, they were sequentially washed with ice-cooled water and ethanol and then dried under a vacuum.

According to the evaporation of chloroform solution, suitable single crystals of compound 3 came to hand. The collection of the diffraction data were on a Bruker Smart Apex CCD area detector using a graphite monochromated Mo Kα radiation (λ=0.71073 Å) at room temperature. The structure was solved by using the program SHELXL-97 [9] and Fourier difference techniques, and refined by full-matrix least-squares method on F2. All hydrogen atoms were added academically. The followed Table 1 lists the Crystallographic data for compound 3.

The 3-(4,5-dimethylthiazol-2-yl)-2,5-diphenyltetrazolium bromide (MTT) assay was chosen to use in the anticancer activity of compounds 1-4 and doxorubicin. First 1 × 104 cells per well were seeded in Dulbecco's modified Eagle's medium (DMEM, 100 μL) supplemented with 10% fetal bovine serum in each well of 96-well microculture plates and incubated for 24 h at 37°C in a CO2 incubator. Compounds were deliquated to the planned concentrations in culture medium and added to the wells with respective vehicle control. After 48 h of incubation, MTT (10 μL, 5 mg•mL-1) was replenished each well and the plates continued to be incubated for another 4 h. Then the supernatant from each well was carefully removed, compounds were dissolved in DMSO (100 μL) and absorbance at 570 nm was recorded.

The 1H NMR, IR and MS for the products are in good accordance with the title compounds. In the 1H NMR spectra of compounds 1-4, single peaks at δ 4.619, δ 4.509, δ 5.656 and δ 4.779 ppm characteristic of the CH group respectively. Single crystals of compound 3 were cultured for X-ray diffraction analysis for the purpose of sustaining the configuration of the product.

Presented in Figure 2 is the crystal structure of compound 3. The pyran ring and the benzene ring are virtually vertical and is nearly coplanar with the mean plane of the adjacent phenyl ring. Besides, for the compound, the molecules are gathered to form a three-dimensional structure via π-π stacking together with no intermolecular hydrogen bonding interactions, which has been depicted in Figure 3. 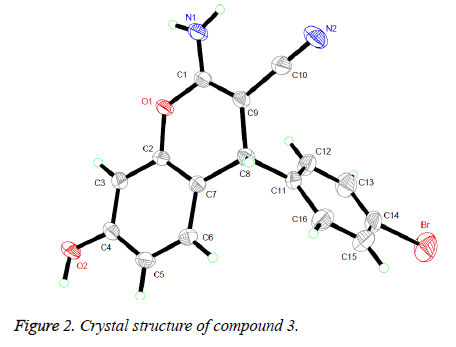 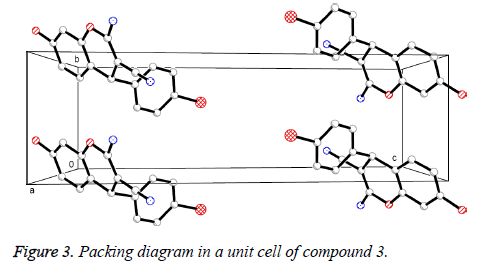 Figure 3. Packing diagram in a unit cell of compound 3.

The evaluation of the four newly synthesized compounds for their in vitro cytotoxic activity against three human osteosarcoma cell lines (HuO9, 143B and MG-63) selected doxorubicin as the reference drug that is based on the method described as reported by Vichai and Kirtikara [10]. The assessment of cytotoxicity was at concentrations of 0, 0.01, 0.1, 10 and 100 μg/mL. The relation between remaining fraction and drug concentration was plotted to obtain survival curves of the three tumor cell lines after accretion of the specified compounds. IC50 is chose as the parameter here for it is in line with the concentration required for 50% inhibition of cell viability. The comparison of IC50 values between the synthesized compounds and the reference drug are listed in Table 2. According to data we obtained, it could be found that among the tested compounds, the compounds 3 and 4 with an IC50 value of 7-10 μM has the most powerful cytotoxic effect against the three human osteosarcoma cell lines than other two compounds. From the antitumor screening results the against three human osteosarcoma cell lines (HuO9, 143B and MG-63), some structure activity relationships can be suggested. The strong electron-withdrawing group (Br, CN) in the phenyl ring in compounds 3 and 4 favors the activity; the strong electron-donating group (OCH3) in the phenyl ring in compound 2 inactive the activity.

Table 2. Results of in vitro cytotoxic activity of the synthesized compounds and doxorubicin on three human osteosarcoma cell lines.

In summary, four new pyran derivatives were synthesized and their cytotoxic activity against the three human osteosarcoma cell lines was then investigated. Among the tested compounds with IC50 value from 7 to 10 μM, the activity of compounds 3 and 4 was the highest. What is more, it could also come to a conclusion from the antitumor screening that the strong electron-withdrawing group in the phenyl ring favors the activity.