1Department of Biology, Faculty of Science, University of Kufa, Iraq

Objectives: Asymptomatic bacteriuria is one of the most important silent diseases frequently infect women in worldwide.

Materials and Methods: A total of 263 culture positive bacterial isolates from 862 urine samples were collected from older women (60-70 years old) admitted to Al-Najaf hospital in Al-Najaf Governorate, Iraq during January 2016 to December 2017. All bacterial isolates were identified according to standard microbiological tests. Antimicrobial susceptibility test was done according to method by Kirby-Bauer.

Conclusions: There were many older women infected with asymptomatic bacteriuria caused by bacteria with high resistant to different antimicrobials; therefore, the antimicrobial sensitivity test must be done periodically.

This is a cross-sectional study carried out in Al-Najaf hospital in laboratory of microbiology in Al-Najaf Governorate, Iraq during January 2016 to December 2017. A total of 862 older women (60-70 years old) were included in this study. All women were not suffering from any signs and symptoms of urinary tract infections, not received any antibiotic treatments for any reason within the last one week and accepted being a part in the study.

Eight hundred and sixty two midstream urine samples were collected from women (two samples from each women for two days) in sterile disposable containers (Hi-media, India), immediately the urine samples were streaked by loop (Himedia, India) onto blood agar (Oxoid, UK) surface and MacConkey agar (Oxoid,UK) surface and incubated under aerobic conditions at 37°C for 24 h. If the single bacterial isolate were in titer ≤ 105 colony forming units were considered as a positive growth. All bacterial isolates were identified according to standard microbiological methods [13,14]. Antimicrobials susceptibility testing was determined by a disc diffusion test method (Kirby-Bauer) [15]. Antimicrobial susceptibility and resistance was determined according to CLSI guidelines (2017) [16] according to strain growth zone diameter. 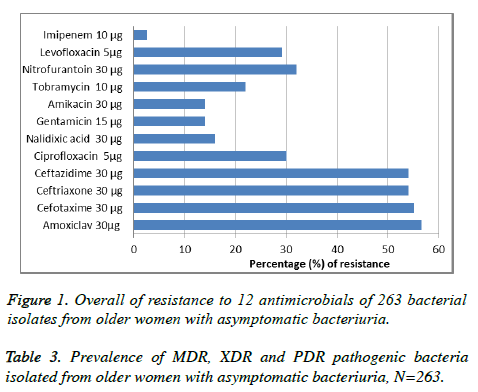 Figure 1: Overall of resistance to 12 antimicrobials of 263 bacterial isolates from older women with asymptomatic bacteriuria.

Data presented as numbers and percentage of bacterial isolates - no. (%).

Data presented as numbers and percentage of bacterial isolates-no (%).

Table 2. Numbers and percentages of pathogenic bacteria isolated from older women with asymptomatic bacteriuria that were sensitive to antimicrobials. N=263.

This is the first study in Iraq (to the best of our knowledge) aimed to investigate the prevalence of older women infected with asymptomatic bacteriuria caused by pathogenic bacteria and antimicrobial susceptibility pattern of these pathogens during two years. According to our data, of the 862 older women, 263 (30.5%) were infected with asymptomatic bacteriuria, this result is similar to the previous reports [17-20]. Mostly, asymptomatic bacteriuria is common in the older women over than 60 years old; many factors may be lead to asymptomatic bacteriuria such as; age related in urologic function, multiple comorbid chronic disease and neurogenic bladder caused by various pathologies [21]. In this study as shown in table 1, of the 263 positive culture, E. coli 109 (41.44%) and K. pneumoniae 85 (32.32%) were the most predominant bacteria were responsible of asymptomatic bacteriuria, while S. saprophyticus was the lowest predominant bacteria 8 (30.06%). These results are in agreement with previous studies [22,23]. Many members of enterobacteriaceae such as E. coli, K. pneumoniae, P. aeruginosa and A. baumannii are able to cause recurrent urinary tract infections lead to asymptomatic bacteriuria [24,25]. Mainly, recurrent urinary tract infections are caused by gram-negative bacteria as well as by gram-positive bacteria such as uropathogenic E. coli, K. pneumoniae, S. saprophyticus and P. aeruginosa [26-28]. These uropathogens have the ability to bind to the bladder epithelium and form biofilms-like intracellular bacterial communities that are responsible for colonization and persistence and protect their members from antibiotics and neutrophils in urinary tract and lead to cause infection [29,30]. In this study, most bacterial isolates were sensitive to Imipenem 10 μg, Amikacin 30 μg, Gentamicin 15 μg and Nalidixic acid 30 μg, respectively as shown in Table 3 and Figure 1. Klebsiella pneumoniae, A. baumannii and P. aeruginosa were the most pathogens resistant to most antimicrobials. Amoxiclav 30 μg, Cefotaxime 30 μg, Ceftriaxone 30 μg and Ceftazidime 30 μg were with low activity against all isolates. These results are in agreement with many previous studies [31-34]. The recurrent urinary tract infection is one of the most serious problems particularly in older individuals who are living in developing countries [35]. The overuse of the same antimicrobials such as 3rd and 4th generation cephalosporins against same bacteria without using of antimicrobial sensitivity test lead to cause asymptomatic bacteriuria and emerging of new bacterial strains with highly resistance to different antimicrobials [36-38]. Our finding in the current study showed that among 263 bacterial isolates, 240 (91.3%) were MDR (bacteria resist three different classes of antimicrobials), E. coli 3 (2.7%), K. pneumoniae 9 (10.5%), A. baumannii 3 (9.3%) and P. aeruginosa 1 (5.5%) were sensitive to only one or two types of antimicrobials (XDR isolates), while K. pneumoniae 5 (5.8%), A. baumannii 1 (3.1%) and P. aeruginosa 1 (5.5%) were resistance to all types of antimicrobial classes (PDR isolates) (Table 3). These results are similar with other studies in different countries [39-41]. Multi-drug resistance gram negative and gram positive bacteria became the most problem numerous pathogens cause serious infections worldwide such as burns and urinary tract infections [42,43]. Recently, extensive and pan- drug resistance bacteria such as K. pneumoniae , A. baumannii and P. aeruginosa were considered are the most problem pathogens resist about 98% of antimicrobials [44]. Many reasons lead to increase the prevalence of MDR, XDR and PDR uropathogenic bacteria include, the incorrect administration of antimicrobials and increase in the production of beat-lactamases enzymes by pathogenic bacteria and lack of good controlling mechanisms in hospitals [45].

In Iraq, asymptomatic bacteriuria is a common neglected disease among older women over than 60 years old. E. coli is the most commonly bacterium were isolated. Klebsiella pneumoniae, A. baumannii and P. aeruginosa are a highly dangerous drug resistant pathogens cause this silent infection. In spite of imipenem 10 μg is expensive, but is still one of the best antimicrobials against different pathogenic bacteria cause asymptomatic bacteriuria.