Streptococcus pneumoniae is an important pathogen, which is mainly the causative agent of pneumonia. The limited treatment and control options mean refers an urgent need for novel effective therapies to treat infected patients. The study has described one approach of controlling and treating this pathogen using Salvadora persica. An extract from different parts of this plant has been used including twigs, fruit, and root. All extracts were shown to clear pneumococci lawns on solid media. However, fruit extract showed a considered reduction in pneumococcal colony forming unit (CFU) in liquid culture. This represents a promising therapeutic strategy against pneumococcal infection in particular by highly invasive strains that have evaded vaccination, or are resistant to existing antibiotics.

Streptococcus pneumoniae is a major cause of pneumonia, sepsis, and meningitis, responsible for over 1.2 million deaths per year. Worldwide, pneumonia is the leading infectious cause of mortality among children and adults, with Streptococcus pneumoniae being the most commonly recovered isolate [1]. In developing countries, respiratory tract infections frequently progress to fatal sepsis and meningitis, particularly in the immunocompromised, young, and elderly [2]. Approximately 50% of deaths occur during the first 48 h of treatment, where antibiotic therapy affects mortality during this period [3-5]. Furthermore, rates of antibiotic resistance are rising with over one third of isolates in the US and parts of Europe showing reduced susceptibility to penicillin [6,7]. As, pneumococcal conjugate vaccines have resulted in a decline in invasive disease caused by pneumococcal serotypes included in the vaccine [8], non-vaccine serotypes have been shown to cause replacement disease. Another antimicrobial agent should be discovered to be used against this bacterium to address these important clinical challenges and provide cross serotype protection against pneumococcal infection. One such source of a new antimicrobial; is a Salvadora persica.

S. persica, locally called miswak is an ancient toothbrush belongs to the Salvadoraceae family. It is scientifically proven to prevent dental decay when it is used for tooth cleaning [9]. Different parts of this plant such as root, twigs, and stem are used in Middle East to obtain dental hygiene. The use of high concentration of S. perscia extract gave similar activity to that obtained by using oral disinfectants and anti-plaque agents, such as triclosan and chlorhexidine gluconate [10,11]. Studies have shown that miswak extract contains antibacterial, antifungal and anti-plasmodial effects [12-14]. The present study has investigated the impact of S. persica root, fruit, and twig extract on the most common causative communityacquired pneumonia, Streptococcus pneumoniae.

Fresh and healthy root, fruit, and twigs of the plant S. persica were collected from local farms in Hali centre, Alqunfudah city, province of Makkah, Saudi Arabia (Figure 1). The collection of the plant component was undertaken in June 2014. 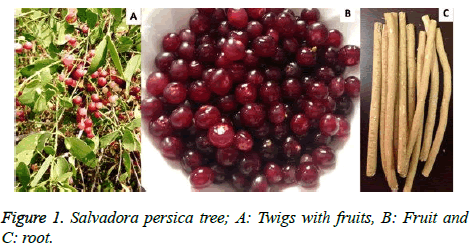 Figure 1: Salvadora persica tree; A: Twigs with fruits, B: Fruit and C: root.

Roots, twigs, and fruit of S. persica were washed several times with water and then were left to dry in air. A 500 g of root and twigs were grinded and homogenized with 250 μl of water. Fruits were directly homogenized without the addition of water. All different aqueous extracts were centrifuged and then filtered with 022 μm pore size filters.

Laboratory strain (D39) of Streptococcus pneumoniae was used in this study. The bacteria strain was provided from laboratory beads collection stocks of Professor Aras Kadioglu, University of Liverpool, United Kingdom.

Blood agar (Oxoid, UK) was prepared according to the manufacturer’s instruction, autoclaved, cooled down, and 5% of horse blood was added. Medium then was dispensed at 20 ml per plate in 12 × 12 cm Petri dishes. Set plates were incubated overnight to ensure sterility before use.

Determination of zone of inhibition method: Antimicrobial activity was undertaken using spot test as described by Armon and Kott [15]. 500 μl of exponential growth of strain D39 was added to 3 ml of 0.4% sloppy agar (3.7 g brain heart infusion (BHI) broth base and 0.4 g of agar). The mixture was then poured on BHI agar base, distributed all over the plate, and left on the bench to set. 10 to 20 μl of extract was spotted on the top of pneumococcal lawns, once lawns were made and the agar set. Spotted plates were left on the bench to dry and then incubated overnight at 37°C using an-aerobic conditions. The plates were observed the next day to monitor the presence of zone of killing, which indicate the antimicrobial activity.

Antimicrobial effect on bacterial growth: Colony-forming units were enumerated using the Miles-Misra assay with some modifications to evaluate the effect of S. persica extract on pneumococcal growth. Triplicate dilutions of 10-1 of each plant extracts were made using BHI-serum broth (20% of foetal calf serum) and were kept for further processes. Tube of 10 ml of brain heart infusion (BHI) broth was inoculated with strain D39 and incubated overnight at 37°C. The following day, they were centrifuged at 1750 Xg for 15 min. The pellets were resuspended in 1 ml of extract/BHI-serum broth, which were prepared earlier. 700 μl from the re-suspended pellets for each serotype was added to 10 ml of BHI-serum broth, which was then incubated at 37°C. The blood agar plate was divided into six sections. Three drops of 20 μl of each culture were spotted over each section. The previous process was assessed on two plates and repeated twice. All plates were incubated in CO2 gas jar at 37°C overnight. The following day, the dilution containing the optimum numbers of colonies (~200 colonies) was counted and calculated the viable count using the following formula;

Determination of zone of inhibition method

A zone of killing on spotted areas has been observed (Figure 2). The zone of bacterial growth inhibition was very clear using all extract indicating that S. persica extracts have a bactericidal effect on S. pneumoniae growth. 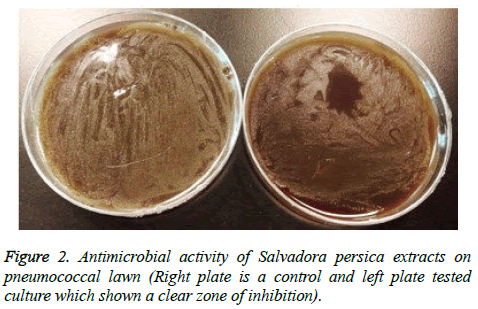 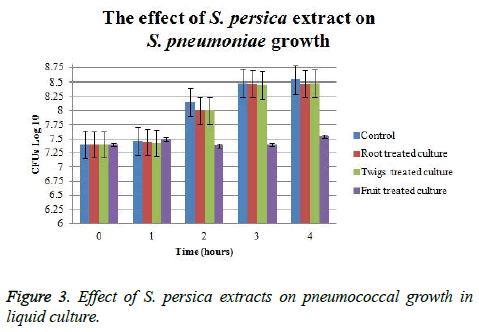 Medicinal plant extracts are being increasingly reported as antimicrobial agents from different parts of the world. The World Health Organization (WHO) has estimated that the extraction or the active constituents of such plant are used as traditional medicine in 80% of the world’s population [16]. Ancient Arabs were familiar to Miswak to clean their teeth and get them white and shiny [15]. The same method of teeth cleaning approach was used in Japan and USA with different type of plants [17]. The efficacy of Miswak on different bacterial growth was extensively studied; including, Staphylococcus aureus [12], Streptococcus fecalis and S.mutans [18], Candida albicans [19], and Candida species [13].

In the present study, the extracts obtained from fruits, twigs, and root of Salvadora persica showed strong activity against S. pneumoniae wild type strains. The current results of this study might justify the ancient use of root and twigs of this plant as tooth brush. Zone of growth inhibition on pneumococcal lawn was observed by using extracts from twigs, fruits, and roots of S. persica that indicated their ability to kill pneumococcal cells. The effect of these extract on pneumococcal growth in liquid culture showed only fruit extract reduced pneumococcal CFUs in about one log difference as compared to controls. However, very small difference in log CFUs difference was obtained by using twigs and root extracts. The difference between the effect of twigs and root extract to clear pneumococci in lawn and broth might refer to the concentration of active material. Diluting the extracts during measuring their effect on pneumococcal in broth cultures might decreases the effect of antimicrobial agents indicating that the concentration of antimicrobial agent in fruit extract was higher than those in twigs and root extract.

The author is very thankful to all the associated personnel in any reference that contributed in/for the purpose of this research. Further, this research holds no conflict of interest and is not funded through any source.