Costus speciosus is a unique Indian ornamental plant species in the genus Costus that has used in traditional medicine where exhibited high importance to multi-purpose pharmacological applications. Essential oil was first obtained from Costus speciosus dried roots, ethanolic extract containing diosgenine was isolated and epoxidized by using m-chloroperbenzoic acid to yield diosgenine epoxide, then analyzed them by using IR, NMR and GC-MS methods. Antimicrobial activities of the essential oil, organic extracts of the dried roots of Costus speciosus were scored on the basis of the change in the general shape of the fungal spores SEM analysis. The results showed that in vitro treatment of fungi by the essential oil led to hyphae disruptions and changes in the fungal spore shapes. The studies on the antimicrobial activity showed high growth inhibition for Microsporum gypseum, M. canis, Candida albicans, Pseudomonas aeruginosa and Staphylococcus aureus when challenged with concentrated oil extract. Methanol and ethanol extracts of the oil exhibited an inhibitory effect on the fungi, yeast and bacteria, while the constituent diosgenin epoxide ingredient in the oil showed higher in vitro growth inhibitory activity than diosgenin against M. gypseum, C. albicans and C. tropicalis.

Plants have been an important source of antibiotics for thousands of years. The World Health Organization (WHO) has estimated that up to 80% of people worldwide still rely mainly on traditional remedies such as herbs for their medicines. Plants are also alternatives to antibiotics and have fewer side effects compared to allopathic medicine [1]. The Zingiberaceae family constitutes a vital group, medicinal and aromatic plants which characterized by the presence of volatile oils and oleoresins of export value [2]. The rhizomes and roots of Costus speciosus are characterized as bitter, astringent, purgative, anthelmintic, antioxidant, antitumor improves digestion and stimulant [2-6]. Juice of the rhizome is used to relive from headache and for cooling [3,7].

On the other hand, dermatophytes cause some of the most important diseases that infect humans and animals, particularly affecting keratinous tissue such as skin, hair and nails. Trichophyton, Microsporum, and Epidermophyton are the three major groups of dermatophytes, and these microorganisms are related to tinea and ringworm infections [8,9]. These microorganisms are characterized by easy transmission between hosts, wide prevalence and presence in large human and animal reservoirs [10]. Examination of 1254 human patients and isolated several samples from their skin, hair and nails and identified various dermatophytes, such as T. rubrum, T. mentegrophytes, M. gypseum and M. canis, all of these dermatophytes are associated with a type of tinea [11]. Most human skin infections are caused by a fungi of the type Microsporum, the study [12] analyzed M. canis from 944 patients who visited an outpatient clinic over a 17-year period (1993-2002) in Korea. In addition, Cutaneous candidiasis is an opportunistic infection and isolated Candida species from 250 diverse clinical sources [13]. The C. albicans (39.64%) was the most frequently isolated species on mucosal surfaces and superficial infections of the skin [14]. Bactria is found that “green nail syndrome” a type of skin lesions caused by P. aeruginosa, and it is highly associated with tinea pedis patients [15]. The macerated interspaces pathogen defined were S. aureus, Brevibacterium epidermidis and Pseudomonas species [16]. Mixed fungal and bacterial infections were seen in deep wounds of diabetic patients and included C. albicans, C. tropicalis, Enterococcus faecalis, S. aureus and P. aeruginosa. Most of these fungi and bacteria were resistant to antibiotics such as itraconazole, amphotericin B, voriconazole and flucytosine [17,18].

Extracted essential oil and diosgenin (Figure 1), a steroidal sapognein from Costus plants has been previously demonstrated for its estrogenic effects and possible pharmaceutical exploitation [19]. The aim of this work is to ascertain the antimicrobial effects of dried fine powder of Indian Costus plant roots. Epoxidation of diosgenin was performed by using m-chloroperbenzoic acid. The extracts, essential oil, diosgenin were tested for their antimicrobial activity. After treatment with essential oil extract, the change in the general shape of the fungal spores was examined by SEM analysis.

The dried roots of Indian Costus were collected from herb store (Jeddah, Saudi Arabia). All the roots were washed with water, dried and ground well. The fine powder obtained was used to extract the essential oil and this oil was tested for its antimicrobial activity [20].

The dried root fine powder (550 g) of Indian Costus was subjected to steam distillation for three hours. About 50 mL of the distillates were collected and extracted with chloroform (3 × 100 mL). The extracts were dried over anhydrous sodium sulphate (Merck, Germany), and the solvent was removed by evaporation. The essential oil yield obtained was around 0.65% and was stored in a refrigerator at 6°C.

The dried powdered roots of Indian Costus (200 g) was extracted successively using cold percolation system of ethanol, methanol, distilled water or chloroform (400 ml for each) for 4 days, using a stirring apparatus [21]. The solutions collected were filtered through Whatman filter paper. The extracts were evaporated to dryness under reduced pressure at 90°C by Rotary vacuum evaporator to obtain the respective extracts and stored under liquid nitrogen.

A solution of m-CPBA (10 mmol, 80%) was added cautiously drop wise over 15 min to a stirred solution 1 (5 mmol) in CHCl3 (25 ml) at 0°C. The mixtures were stirred continuously in an atmospheric nitrogen at room temperature (TLC, peroxide test by KI, 10%), after which it was carefully washed with a saturated aqueous solution of NaHCO3 (3 × 10 ml) followed by distilled water (3 × 10 ml). The organic layers were separated, dried over anhydrous Na2SO4 and evaporated under reduced pressure at room temperature. The crude residue products were purified by column chromatography on silica gel adsorbent. Elution of the column was performed with the solvent mixture of petroleum ether 60-80°C and ether (9:2), which gave the epoxide product 2a,b.

Antimicrobial activities of essential oils and plant extracts of Indian Costus: About 0.5 g of the testing compound was dissolved in 1.25 ml of a solvent (chloroform, ethanol and methanol) and it was cultured in sabaroud dexterous agar media and blood agar media using the agar disc diffusion method. Each media used were inoculated with 1 ml from a suspension of M. gypseum, M. canis and C. albicans for sabaroud dexterous agar and P. aeruginosa and S. aureus for blood agar. The fungi and yeast were incubated at 25°C for 8 days, and 48 hours respectively and then tested at 37°C for 24 hours. After that, the diameter of inhibition zones was measured in millimeters [23,24].

The curative properties of medicinal plants are perhaps due to the presence of various secondary metabolites such as alkaloids, flavonoids, glycosides, phenols, saponins, sterols etc. The extracts of rhizomes have revealed the presence of alkaloids, flavonoids, cardiac glycosides, saponins, sterols and tannins, which may have led to their discovery and development as drugs [25]. The pharmacological action of crude extract is determined by the nature of their constituents [26]. The aqueous extract of Costus speciosus rhizomes showed antimicrobial activity against Staphylococcus aureus. However, the organic phase (e.g. methanolic extract) did not show inhibitory activity against any bacteria [25]. The steroidal sapogenine diosgenine (1) has been successfully isolated from C. specious (Koen) rhizome extract and identified with authentic sample’s by comparison of spectroscopic data.

The epoxidation of diosgenin (1) using m-chloroperbenzoic acid (m-CPBA) at room temperature gave the regioisomeric 5α,6α-epoxyspirostane and 5β,6β-epoxyspirostane (2a,b) (exo and endo forms) in 72% yield (Figure 2). Chemical structures were confirmed through spectral analysis, 1H-NMR, 13C-NMR and MS spectrums which were in a good agreement with [19].

The antimicrobial activities of Indian Costus extracts were tested on fungi, yeast and bacteria. The results (Figure 3) showed high inhibition of M. gypseum, M. canis and C. albicans. The treatment by oil extract showed an inhibitory effect on the fungi with methanol and ethanol extracts. At 1.25 m the inhibition zone was 85 mm of essential oil, (85, 75 and 80 mm) of methanol extract and (85, 79 and 62 mm) of ethanol extract respectively. In addition, M. gypseum growth was more sensitive than M. canis and C. albicans at 1.25 m of all extracts compared to the control sample. The SEM images obtained for the essential oil efficiency on M. gypseum hyphae and spores showed that treatment with the essential oil led to hyphae disruptions and changes in the general shape of the fungal spores (Figures 4 and 5). The same extract concentrations of Costus on pathogenic bacteria showed that the growth of P. aeruginosa was more affected by essential oil than the ethanol and methanol extracts. On the other hand, the inhibition zone measurements were 60 and 50 mm for methanol and essential oil on S. aureus, whereas the Costus methanolic extract was very effective on these bacteria (Figure 6). Indian Costus diosgenin was effective against M. gypseum at 1.25 m. However, it was not as effective against C. tropicalis and C. albicans growth when used in the same extract concentrations. Further, the epoxidation of diosgenin resulted in more activity than the diosgenin extract against the fungus and yeasts (Figures 7 and 8) where, the results for the inhibition zone measurements were 76, 82 and 25 mm compared with the control sample. 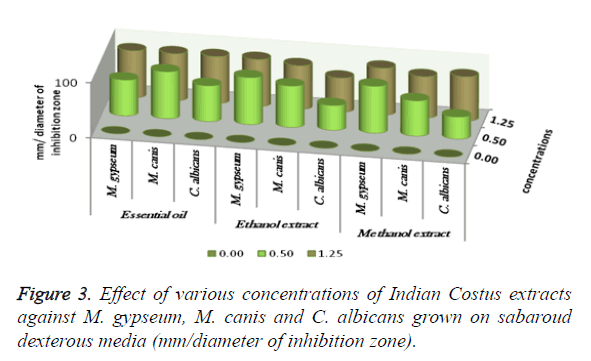 Figure 4. (A, B and C) SEM images of M. gypseum (control) showing the normal growth of spores and hyphae. 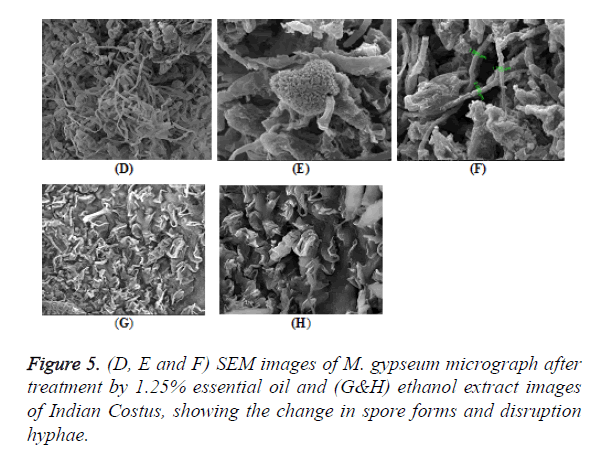 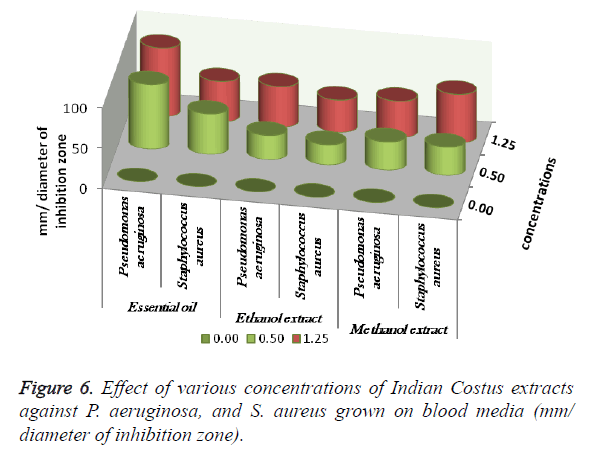 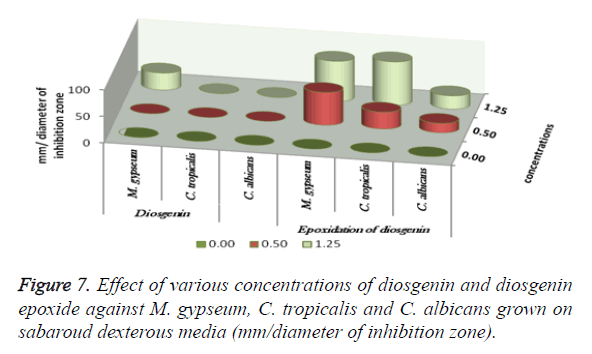 Based on previous reports, the Indian Costus roots have several of medicinal components items that are used in the treatment of several diseases. Saussurea costus is a popular medicinal plant, with sesquiterpene lactones as major phyto constituents and contains other pharmacological compounds such as costunolide, dehydro costus lactone and cynaropicrin which exhibit anti-inflammatory, anti-ulcer, anticancer and hepatoprotective activities in vitro and in vivo models [27]. Reports by [28,29] have shown the antioxidant activity of the medicinal plant Costus speciosus which has been used for diabetic males by treatment of costunolide and eremanthin, those compounds are isolated from this plant by gas chromatography-mass spectrometry (GC-MS) analysis. However, the antibacterial and antifungal activities were very high with by dichloromethane and methanol extracts, which were isolated from species of Alpinia, Costus and Zingiber [30]. The essential oil, methanol and ethanol extracts of Costus roots contain an antimicrobial activity, and methanolic and aqueous extracts of Costus arabicus one of 12 Yemeni herbs that are used as traditional medicine for human cancer cells, have demonstrated an inhibitory effect against gram-positive, three gram-negative bacterial and one fungal stains as well as three resistant Staphylococcus strains [31].

The results obtained from [32,33] revealed the efficiency of the dried roots and aquatic extracts (hot and cold) of Indian Costus used in high concentrations against Aspergillus niger, A. flavus, A. fumigatus and C. albicans. Concentrations of 20%, 25% and 30% were highly effective against the tested fungus, yeast and bacteria, which are respiratory pathogens. Thus, as the previous results indicate the roots of Indian Costus species contain several chemical compounds that are curative for dermatophyte infections. They can be used as an alternative to antibiotics, since they show a double effectiveness insert (antifungal and antibacterial). Thus, this study opens up the possibility of working with therapeutic medical products derived from the roots of Indian Costus.

The antimicrobial activities of Indian Costus extracts were tested on fungi, yeast and bacteria. Fine powder from the dried roots of Indian Costus was used to extract the essential oil. Epoxidation of the extract was performed with mchloroperbenzoic acid with CHCl3 in a nitrogen atmosphere. The extracts and essential oil were tested for their antimicrobial activity. After treatment with essential oil extract, the change in the general shape of the fungal spores was examined by SEM analysis. The results showed that treatment by the essential oil led to hyphae disruptions and changes in the general shape of the fungal spores. The studies on the antimicrobial activity showed high growth inhibition in M. gypseum, M. canis, C. albicans, P. aeruginosa and S. aureus. Further, treatment by oil extract showed greater inhibitory effects on the fungi and yeast than the methanol and ethanol extracts. In addition, the epoxidation of diosgenin resulted in more activity than diosgenin extract against the fungus and yeasts.