Inflammation plays a key role in the pathogenesis of diabetic nephropathy. Infiltration of chemokines, cytokines, and inflammatory cells into the kidney has been reported in both human and animal diabetic models [1,2]. Recently, several clinical trials have been conducted with the aim of controlling inflammation in patients with diabetic nephropathy. Peroxisome proliferator-activated receptor-γ (PPAR-γ) and retinoid X receptor (RXR) are nuclear receptors involved in various cellular processes. PPAR-γ regulates lipid and glucose metabolism and is implicated in pathological conditions including obesity, diabetes, and atherosclerosis [3]. RXR regulates reproduction, cellular differentiation, and hematopoiesis [4]. RXR is critical in the development of the kidneys. A deficiency of retinoic acid results in a reduction in nephron mass [5]. PPAR-γ and RXR agonists are beneficial in various renal diseases. PPAR-γ is involved in the protection of the renal tissues from inflammatory and fibrotic responses [6,7]. Retinoic acid has also shown anti-inflammatory and antiproliferative effects in multiple animal models of glomerular disease [8-10]. PPAR-γ and RXR form heterodimers within the nucleus and activate transcriptional factors [11]. Although their anti-inflammatory and anti-proliferative effects have been known well, their synergistic effect in kidney diseases is not clear. We therefore investigated the anti-inflammatory effect of a combined treatment with PPAR-γ and RXR agonists in rat mesangial cells (RMCs) stimulated by a high glucose (HG) concentration.

RMCs were obtained by culturing glomeruli isolated from the kidneys of male Sprague-Dawley rats by conventional sieving methods as previously described [12]. Briefly, the mesangial cells were cultured in Dulbecco’s modified Eagle’s medium containing 20% fetal bovine serum, 100 U/ml penicillin, 100 μg/ml streptomycin, 44 mmol/L NaHCO3, and 14 mmol/L N-2-hydroxy-ethylpiperazine-N’-2-ethane sulfonic acid, at 37°C in a humidified atmosphere of 95% air and 5% CO2. Subconfluent cells were cultured in 0.1% fetal bovine serum for 24 h before the experiments. The cells were then incubated with 5.6 (control) or 30 mmol/L D-glucose in the presence of rosiglitazone (GlaxoSmithKline, Middlesex, UK) and/or alltrans retinoic acid (ATRA; Sigma-Aldrich, St. Louis, MO, USA). Cells were cultured in triplicates and harvested at 6 and 48 h, for extraction of total RNA and protein. Bioassays for monocyte chemoattractant peptide-1 (MCP-1) protein were performed on supernatants collected from the samples. All experiments were performed using cells between the 6th and 8th passages.

Total RNA was extracted using TRIzol and reverse transcribed using a cDNA synthesis kit (Fermentas, Burlington, Canada) as previously described [13]. Gene expressions were measured by quantitative real-time polymerase chain reaction (qRT-PCR). The RT-PCR was performed by following a standard three-step cycling condition using SYBR Green Master mix. Primers were designed from the respective gene sequences using Primer3 software. The nucleotide sequences of each primer were as follows: MCP-1, sense 5’ ATGCAGTTAATGCCCCACTC 3’ and anti-sense 5’ TTCCTTATTGGGGTCAGCAC 3’; and glyceraldehyde-3- phosphate dehydrogenase (GAPDH), sense 5’ TGCACCACCAACTGCTTAGC 3’ and anti-sense 5’ GGCATGGACTGTGGTCATGAG 3’. The expression levels of all the genes were normalized to that of the housekeeping gene GAPDH.

The secretary MCP-1 protein levels in the supernatants collected from the samples were measured. The concentration of MCP-1 was determined by quantitative sandwich Enzyme- Linked Immunosorbent Assay (ELISA) using a commercial kit (Biosource Inc., Camarillo, CA, USA), according to the manufacturer's instructions. Each assay was performed in duplicate, and color intensity was measured using an ELISA reader at 450 nm. MCP-1 concentration was expressed relative to the total protein concentration in each sample.

We used non-parametric analysis because most of the variables, especially urinary MCP-1, were not normally distributed even after logarithmic transformation. The Mann- Whitney U test was used to compare differences between two groups. Statistical significance was defined as p value<0.05. All statistical analyses were performed using SPSS version 10.0 (SPSS Inc., Chicago, IL, USA). Data have been expressed as mean ± standard error. 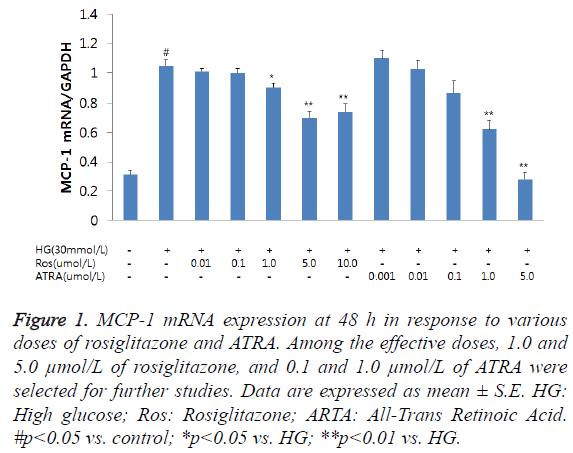 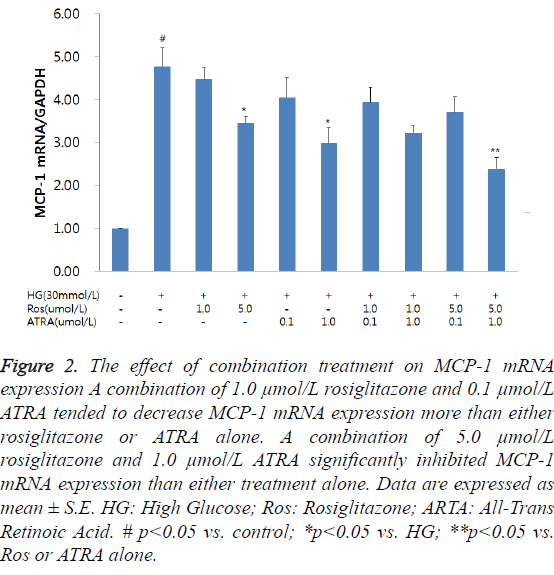 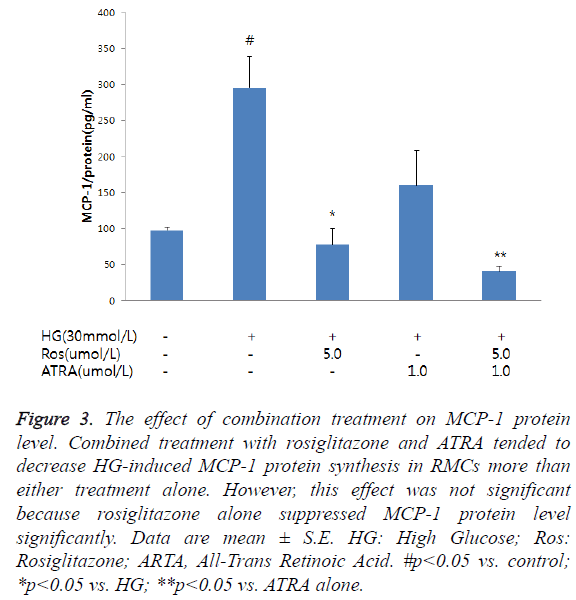 In this study, we have shown that rosiglitazone and ATRA reduced HG-induced MCP-1 synthesis in RMCs. Moreover, co-treatment with rosiglitazone and ATRA suppressed MCP-1 expression more than either treatment alone. These data show the possibility of a synergistic effect on MCP-1 expression due to combined treatment with PPAR-γ and RXR agonists. PPAR- γ agonists have been widely used as insulin sensitizers in diabetic patients. A meta-analysis has demonstrated potential significant benefits of PPAR-γ agonists in diabetic patients [14]. In addition to having an anti-diabetic effect, PPAR-γ agonists are known to have reno-protective effects. Some studies in animal models of diabetic and non-diabetic kidney diseases have shown that PPAR-γ agonists reduce albuminuria and ameliorate renal injury due to their anti-inflammatory and anti-fibrotic effects [6,15-17]. In mesangial cells, PPAR-γ agonists inhibit fibronectin and collagen syntheses, MCP-1 secretion, and cell growth [18]. Our results also showed that rosiglitazone inhibited MCP-1 expression. Retinoic acid also protects against various renal injuries by inhibiting inflammatory and fibrotic changes. Retinoic acid inhibits MCP-1 expression, inducible nitric oxide synthase, fibronectin, and plasminogen activator inhibitor-1 in mesangial cells [10,19-21]. Retinoic acid has also been shown to reduce glomerulosclerosis and renal injury in animal models of kidney disease as well as in type 2 diabetic rats [22-25]. The results from our study on the anti-inflammatory effects of ATRA agree with those in previous reports.

Heterodimers of PPAR-γ and RXR bind to specific PPAR response elements, thereby regulating numerous gene expressions [11]. There are a few evidences that activation of both PPAR and RXR results in synergistic protection against tissue injuries. Activation of PPAR-γ/RXR induces insulin sensitization in diabetic rats [26], inhibits proliferation of stellate cells [27], blunts pro-inflammatory and pro-invasive phenotypes of tumor-associated fibroblasts [28,29], and inhibits inflammatory mediators such as nuclear factor-kappa B and interleukin 6 in breast cancer cells [30]. Even though PPAR and RXR agonists have beneficial effects, they are associated with well-known side effects that limit their application [31,32]. Therefore, combination therapies can be used to obtain therapeutic efficacy with minimal side effects. Our results showed that combined treatment with PPAR-γ and RXR agonists reduced MCP-1 expression more than using either treatment alone.

There are several limitations of combined treatment with PPAR-γ and RXR agonists. Firstly, gene transcriptions can be activated or repressed by co-factors and ligands due to the treatment. Ligands can affect the activities of PPAR-γ/RXR by acting as co-repressors or co-activators [33,34]. Protein flightless-1, which is a modulator of PPAR-γ, interrupts the formation of the PPAR-γ/RXR complex and results in repression of transcriptional activity [35]. Secondly, several PPAR and RXR isoforms are expressed in a nephron segmentspecific manner [36], which can result in different effects according to different combinations of the isoforms [37]. Thirdly, the effects of RXR agonists are affected by the activation of PPAR-γ. This is because RXR agonists impair arterial monocyte recruitment through PPAR-γ activation [38] and PPAR-γ knockout cell lines have shown blunted responses to RXR agonists [39]. Lastly, unexpected side effects can occur from the combined treatment since some authors found that the combined treatment was harmful in type 1 diabetic rats (data not shown). The beneficial and harmful effects of the combined treatment may depend on the selected dose of each agonist.

Suboptimal doses may constitute a new alternative and effective therapy. Escudero et al. [40] reported that, combined treatment with rosuvastatin and bexarotene at suboptimal doses reduced the serious dose-related adverse effects of the two drugs and controlled vascular inflammation effectively. Our results also revealed that the combined treatment showed synergy between the two agonists in controlling MCP-1 expression. Therefore, combined suboptimal doses of PPAR-γ and RXR agonists may produce reno-protective effects; however, further studies are required to clarify the combined effect of the agonists in pathological conditions.

This work was supported by the Korean Society of Nephrology in 2005. We would like to thank GlaxoSmithKline for the generous donation of rosiglitazone for this study.