Ginkgo biloba is a valuable herb that has been used as traditional medicine for thousands of years. Extract of Ginkgo biloba leaves possesses several clinical beneficial effects such as antiinflammatory property. In this study, we investigated the effect of purified polysaccharides from Ginkgo biloba leaf (P-PGBL) on inflammatory reaction induced by lipopolysaccharides (LPS) in RAW264.7 mouse macrophage cells and the potential underlying mechanisms. The results showed that P-PGBL treatment significantly inhibited the LPS-induced protein and mRNA expression of Toll-like receptor 4 (TLR4) in a dose-dependent manner. P-PGBL treatment downregulated the nuclear factor-κB (NF-κB)p65 protein expression in LPS-stimulated RAW264.7 macrophage cells. Meanwhile, the levels of pro-inflammatory cytokines, such as IL-1β and IL-6 were suppressed by P-PGBL. In conclusion, P-PGBL exerts an anti-inflammatory effect by inhibiting TLR4/NF-κB signaling pathway, thereby lowering production of inflammatory cytokines.

Inflammation is a physiological response against invading pathogens and tissue injury. This process involves different cell types, such as macrophages, mast cells, dendritic cells, granulocytes and the innate lymphocytes [1]. It has been reported that the Toll-like receptor 4 (TLR4) signaling pathway plays an important role in the development of inflammation [2]. TLR4 was the first of the human TLRs to be identified, which responds to lipopolysaccharides (LPS) from Gram-negative bacteria. Recognition of lipid A by TLR4 leads to the production of a wide range of immune stimulatory cytokines and chemokines, such as interleukins (ILs), interferon and tumor necrosis factor (TNF)-α [3,4]. Researches indicated that inflammatory responses contribute to various diseases, for example, excessive inflammation can lead to further tissue injury and fibrosis [5,6], and the lack of an inadequately controlled inflammatory response can lead to chronic inflammation, cancer [7], diabetes [8], cardiovascular disease [9] and autoimmune-mediated diseases [10].

Ginkgo biloba is a valuable herb that has been used as “medicine food homology” medicine for thousands of years [11]. In these traditional formulations, Ginkgo biloba leaves provide relief from asthma and cough symptoms, and can alleviate neurological problems due to its neuroprotective effects on the brain [12,13]. Over the past couple of decades, researches concerning its medicinal effects and biological activities have revealed various effects of Ginkgo biloba extract in treating diseases, such as Alzheimer’s [14], cardiovascular diseases [15], cancer [16], stress and memory loss [17]. Polysaccharides of Ginkgo biloba leaves are active components with multiple pharmacological functions, for instance, oxyradical and hydroxyl radical clearance effects, anti-aging properties, antitumor activities, and immunomodulatory effects [18,19]. Rough polysaccharides have been reported to have anti-inflammatory effects [20]. In our previous work, we have purified the rough polysaccharides through gel chromatography, and obtained a water-soluble purified Ginkgo biloba leave polysaccharides (P-PGBL) with uniform molecular weight. Preliminary study showed that the P-PGBL could inhibit inflammation in vivo [21].

In the present study, we investigated the antiinflammatory activity of P-PGBL in LPS-stimulated mouse macrophage RAW264.7 cells by examining changes in levels of pro-inflammatory cytokines. Fur thermore, the expression of Toll-like receptor 4 (TLR4) and downstream molecules of TLR4 pathway were examined to investigate the potential mechanisms involved in the effects of P-PGBL.

RAW264.7 cell line was purchased from the Type Culture Collection of the Chinese Academy of Sciences (Shanghai, China). Dulbecco's Modified Eagle Medium (DMEM) both with and without phenol red, Hanks' balanced salt solution (HBSS), and phosphate buffered saline (PBS) were from Gibco (Carlsbad, USA). Fetal bovine serum (FBS), and LPS from Escherichia coli serotype 0111:B4 were obtained from Sigma (St. Louis, USA). FITC conjugated goat anti-rabbit IgG, rabbit anti TLR4 polyclonal antibody, NF-κB(p65) rabbit polyclonal antibody were purchased from Abcam (Cambrige, England). All other chemicals and reagents were of HPLC grade to be made in China.

Ginkgo biloba leaves were collected from Dandong, Liaoning Province, China. The P-PGBL were extracted and purified from fresh Ginkgo biloba leaves according to our previous methods [21]. The crude powder was fractionalized by gel chromatography on a Sephadex G-75 column (4 cm×80 cm) and collected by an automatic fraction collector (BS-100A, Shanghai Huxi Analysis Instrument Inc., Shanghai, China). Then the fraction with the highest peak on the distribution curve was dialyzed, concentrated, and freeze-dried to obtain P-PGBL. P-PGBL purity was measured by gel chromatography on a Sephadex G-75 column (1.5 cm×95 cm) and HPLC, respectively. All gel chromatography was monitored with the phenol-sulfuric acid method. The molecular weight of P-PGBL was calculated according to the calibration curve obtained by using various standard dextrans. Nucleotides and proteins in P-PGBL were inspected by a UV spectrum assay. Optical rotation was measured with a WZZT1 polarimeter (Shanghai Physical Optics Instrument Inc., Shanghai, China). The polysaccharide component was determined by gas chromatography (GC).

IL-1β and IL-6 concentrations in the cell culture supernatant were detected using the enzyme-linked immunosorbent assay (ELISA) kit (Invitrogen, Carlsbad, CA, USA) according to manufacturer’s instruction, and the results were expressed in pg/ml of protein. All of the analyses were performed in triplicate.

After treatment with LPS (1 μg/ml) in the presence or absence of P-PGBL, RAW264.7 cells were washed with cold PBS. Total proteins of cells were extracted with cell lysis buffer (50 mM Tris–HCl pH 8.0, 120 mM NaCl, 0.5% NP-40, 1 mM PMSF), and 40 μg of protein extract was separated by 10% SDS-PAGE. The extracted protein was transferred to a polyvinylidene difluoride (PVDF) membrane (Bio-Rad), blocked with 5% nonfat milk in TBS-Tween buffer 7 (0.12M Tris–base, 1.5M NaCl, 0.1% Tween-20) for 1h at room temperature and incubated with the appropriate antibody overnight at 4°C. Later this was incubated with horseradish peroxidase conjugated secondary antibody for 30min at room temperature. The bound antibody was detected with peroxidase-conjugated antimouse antibody (1:10,000) followed by chemiluminescence (ECL System) and exposed by autoradiography. The protein bands were quantified by the average ratios of integral optic density following normalization to the GAPDH.

RAW 264.7 cells were plated at 5 × 104 cells/well in 24- well chamber slides (Falcon). For immunostaining, cells were washed twice with cold phosphate-buffered saline, fixed in 4 % paraformaldehyde for 20 min, permeabilized with 0.3 % Triton X-100 for 15 min, and blocked with 10 % normal goat serum for 30 min. Slides were incubated for 1h at 37°C with primary antibody at a 1:100 dilution, washed, and then incubated for 1h with FITC-conjugated IgG (Molecular Probes) at a 1:100 dilution as secondary antibodies. Images were obtained with an Olympus IX71 microscope (Japan).

Statistical analyses were carried out with SPSS 13.0 software (SPSS Inc., IL, USA). Data were analyzed by a oneway ANOVA, followed by Student’s two-tailed t test for comparison between two groups, and data were presented as mean ± SD. P < 0.05 was statistically significant difference.

The effect of P-PGBL on cell viability was evaluated using the Cell Counting Kit-8 assay. As depicted in Fig. 1, following a 24h treatment, P-PGBL at concentrations ranging from 0.5 to 1.5 mg/ml had no effect on RAW264.7 cell viability. Hence these concentrations of PPGBL were considered suitable for further assays. 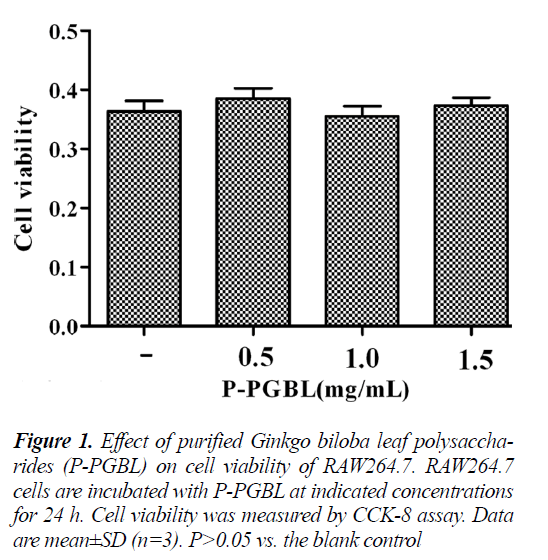 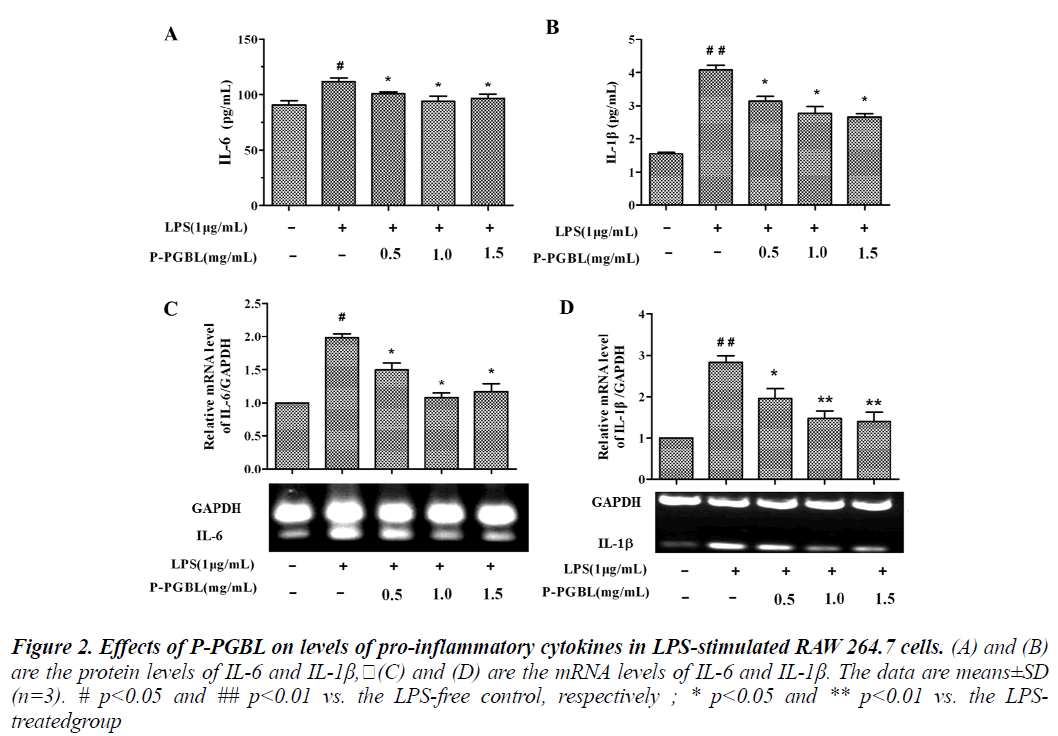 Suppression of LPS-stimulated TLR4 expression by PPGBL in RAW 264.7 cells

The TLR4 signaling plays an important role in the development of inflammation. We further investigated the effects of P-PGBL on TLR4 expression in LPS-stimulated macrophage. Western blot analysis showed that the level of TLR4 protein was decreased by treatment with PPGBL, as compared with the LPS-stimulated group (Fig. 3 and 4A). Moreover, treatment with P-PGBL also downregulated the mRNA level of TLR4 in cells (Fig. 4B). 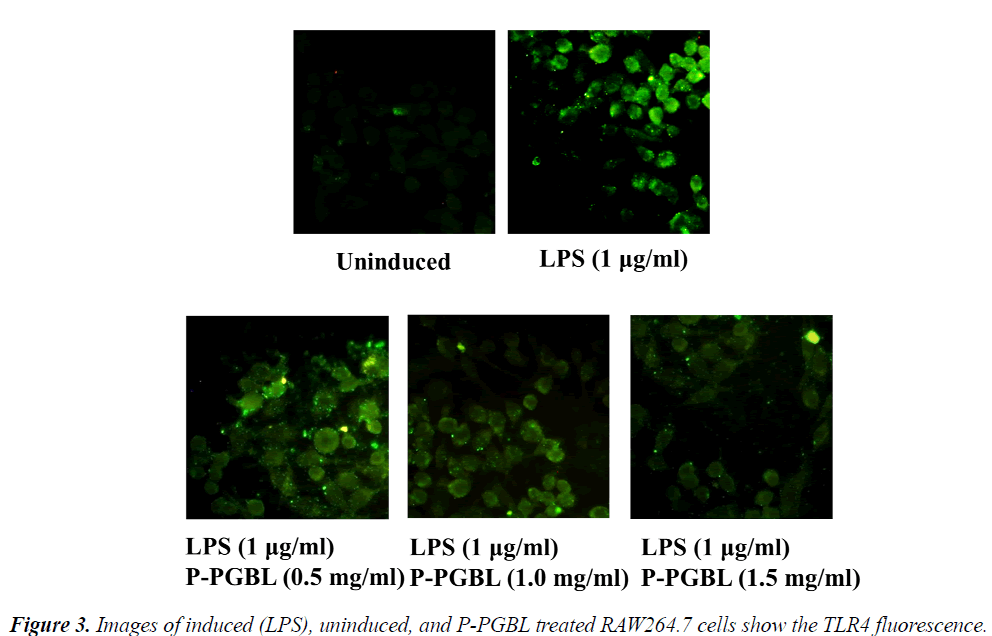 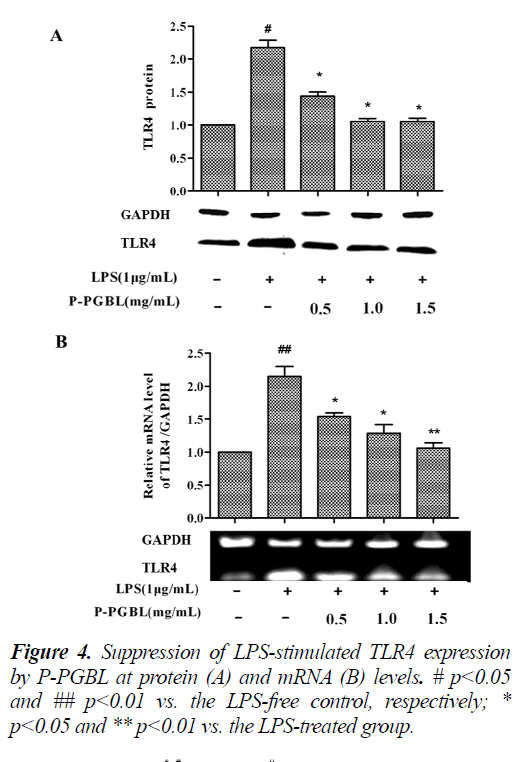 Suppression of LPS-stimulated NF-κB p65 by P-PGBL in RAW 264.7 cells

In order to investigate the effect of P-PGBL on TLR4 signal pathways, we measured the expression of NF-κB in inflammatory cells by western blot and qPCR. As shown in Fig. 5, both the results of western blot analysis and qPCR demonstrated that, the protein and mRNA level of NF-κB induced by LPS in RAW cells decreased significantly (P < 0.05) in a dose dependent manner when treated with P-PGBL. These data together with the above results suggested that P-PGBL might provide protection from LPS-induced inflammation through the suppression of TLR4/NF-κB pathways. 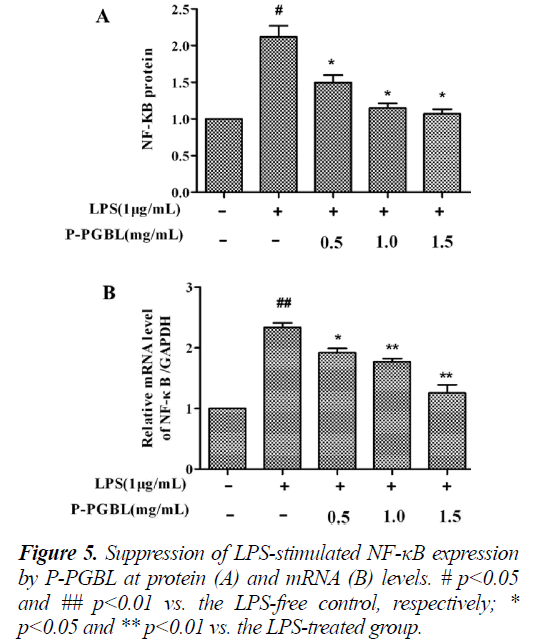 In this study, we investigated the anti-inflammatory activity of P-PGBL in LPS-stimulated mouse macrophage RAW264.7 cells, and examined its effect on the expression of TLR4 and NF-κB, which is a key molecule of TLR4 signaling pathway. We demonstrated that P-PGBL could inhibit LPS-induced production of inflammatory cytokines. Moreover, treatment with P-PGBL reduced the expression of TLR4 and NF-κB in LPS-stimulated macrophages, suggesting that P-PGBL might reduce proinflammatory cytokines through down regulating TLR4 and NF-κB.

NF-κB is considered as a master switch in the regulation of inflammation and immunity. As a transcription factor, NF-κB controls an array of pro-inflammatory genes involved in the inflammatory signaling cascade. Therefore, we speculated that the anti-inflammatory effect of PPGBL in response to LPS-induced inflammation correlated with NF-κB. To our expected, level of NF-κBp65 expression reduced in LPS-stimulated macrophages after treated with P-PGBL. These results demonstrated that PPGBL could inhibit the expression of inflammatory cytokines IL-6 and IL-1β through inhibiting the TLR4/ NF-κB pathway.

P-PGBL has good anti-inflammatory action. One of the underlying mechanisms may be that P-PGBL can inhibit the expression of inflammatory cytokines IL-6 and IL-1β by suppressing the TLR4/NF-κB signal pathways. This study not only provides the experimental evidence for the development of anti-inflammatory natural Ginkgo biloba polysaccharide drugs.

This research was financially supported by the "Twelfth Five-Year" Science and Technology Research Project of The Education Department of Jilin province (no. 2014- 270), and the Natural Science Fund of Changchun Teaching College.