The oral cavity is a space that constantly maintains invasive conditions due to the saliva, and is an environment whose constant humidity makes it an ideal place for bacteria to reside in. Thus, in the human oral cavity, more than 700 kinds of bacteria exist, which affect the oral health and morbidity [1]. Bacterial flora in morbidity form dental plaque in the human oral cavity, which causes bad breath, dental caries, gingivitis, and periodontal disease [2,3].

According to the recent report of WHO on dental disease, 60% of adults worldwide experience dental caries and periodontal disease [4]. They are thus regarded as the two major oral diseases and are caused by the bacteria residing in the oral cavity [5].

Dental caries occurs when the tooth enamel is demineralized as it interacts with the food residues in the oral cavity and with the acids generated by the bacteria in the dental plaque and is a typical irreversible chronic disease that frequently occurs in all ages [6,7]. It is mainly caused by the human oral cavity’s resident oral bacteria called “Streptococcus mutans (S.mutans)” [8]. S. mutans is capable of adhering to the tooth surface and releases glucosyltransferase (GTase) [9]. GTase produces glutinous glucan, whose stickiness makes it easy for S. mutans to adhere to the dental plaque. In addition, as S. mutans’ acid-producing ability is high and as it tolerates acid well, when the pH becomes lower than 5.5, the tooth enamel’s demineralization process is started, and dental caries is developed [10]. As the destroyed tooth structure cannot be recovered, there is a growing demand for antimicrobial substances that can inhibit bacterial growth to prevent dental caries [6,11].

Studies on the inhibition and prevention of dental caries have been continuously carried out of late [9]. Among them, there has been an increasing interest in inhibiting bacterial growth using natural substances, and various studies have been conducted by using them as therapeutic agents for diseases, prevention measures, or dietary supplements [9,12]. It has been reported that the ethanol extracts of medicinal herbs, such as Crataegi Fructus, Coptis japonica Makino, Thujae Orientalis Folium, and Atractylodis Rhizoma, have a strong antimicrobial activity against both Gram (+) and Gram (-) bacteria, and that the extract of Mori Cortex Radicis inhibits the proliferation of L. monocytogenes [13]. Additionally, various medicinal herbs, such as Schizandra cheinensis, Curcumae longae Radix, Jacho, and Sophorae Radix, have been known to exhibit antimicrobial activity [14-16].

Among the medicinal herbs that exhibit antimicrobial activity, Glycyrrhiza uralensis is a perennial herbaceous plant belonging to the soybean family that is used as a medicinal material by drying the roots, and was given its name due to its sweet taste. It also has a strong growth potential and is less damaged by harmful insects, making it easy to cultivate in places with suitable climates and soils. Due to these characteristics, Glycyrrhiza uralensis has been cultivated in China and North Korea for a long time, as part of such countries’ herbal resources [17]. The main ingredient is a large amount of phenolic groups that have bactericidal action. Among them, liquiritigenin and isoliquiritigenin are known to have inhibitory activity against skin flora, including Bacillus subtilis (B. subtilis), Propionibacterium acanes (P. acanes), Escherichia coli (E. coli), and Pseudomonas aeruginosa (P. aeruginosa) and to have antimicrobial activity against the causative bacteria of Listeria food poisoning, L. monocytogenes, but the studies that apply Glycyrrhiza uralensis to oral diseases are not sufficient [18,19].

Therefore, this study aimed to investigate the anti-microbial activity of the natural substance Glycyrrhiza uralensis extract against oral bacteria by applying it to S. mutans, the main causative bacteria of dental caries, for the prevention and treatment of dental caries. Furthermore, this study intended to confirm the usefulness of Glycyrrhiza uralensis extract as an antimicrobial agent against oral bacteria as part of the search for the next-generation antimicrobial materials, and to provide practical basic data for the prevention and treatment of oralrelated infectious diseases by presenting the possibility of its being used as a therapeutic agent for oral diseases.

The strain of S. mutans (KCTC 3065/ATCC 25175) was used for the experiment after subculture in culture broth, which was anaerobically incubated in brain heart infusion (BHI; Sigma, USA) broth at 37°Ϲ for 24 h.

The antimicrobial activity of Glycyrrhiza uralensis extract was measured using the paper disk agar method [20]. Experimental strains were inoculated into the BHI broth and were anaerobically incubated at 37°Ϲ for 24 h. The Glycyrrhiza uralensis extract was diluted to come up with a maximum concentration of 10 mg/ml. The 100 μl diluted extract at each concentration (0 mg/ml (control), 2 mg/ml, 4 mg/ml, 6 mg/ml, 8 mg/ml, and 10 mg/ml) was absorbed in an 8 mm filter paper disk (Advantec Toyo Kaisha, Ltd.), and then the disk was dried. The dried disk was placed on the surface of the test plate media, was adhered, and was anaerobically incubated at 37°Ϲ for 24 h. The clear zone (mm) around the paper disk was measured to examine the antimicrobial activity of the Glycyrrhiza uralensis extract.

Measurement of the colony-forming units (CFUs)

After incubation at 37°Ϲ for 24 h, the absorbance (OD) was measured with a UV spectrophotometer (SHIMADZU UV-1280, Shimadzu Co., Kyoto, Japan) at an absorption wavelength of 660 nm for determining the antimicrobial effect of the Glycyrrhiza uralensis extract.

Determination of the antimicrobial effect using the disk diffusion method 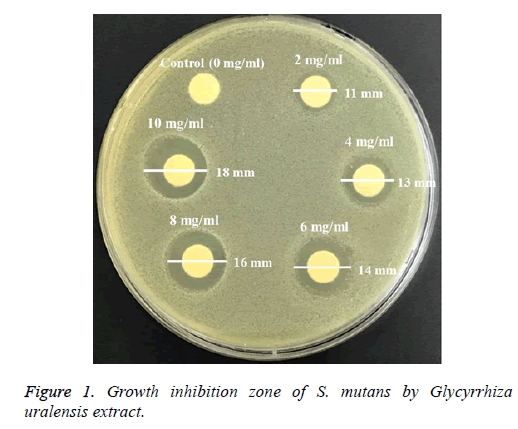 Counting the number of CFU 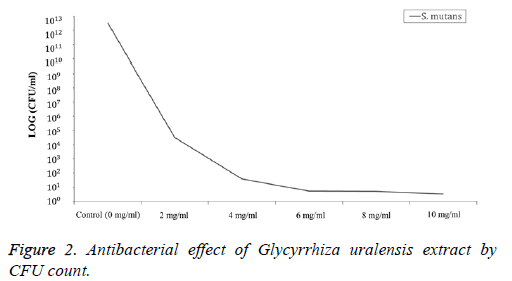 Evaluation of the survival rate 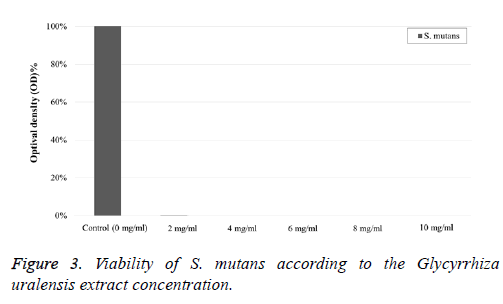 Figure 3: Viability of S. mutans according to the Glycyrrhiza uralensis extract concentration.

With the increased interest in well-being of the consumers in the modern society, not only whole-body health but also oral health is becoming important. Therefore, it is natural for consumers to have a greater interest in and demand for natural ingredients rather than chemical ingredients, which have been reported to be harmful to the body. Therefore, research on and application of natural medicinal plants has been actively carried out in various fields.

Oral health refers to the state of having teeth and oral tissues and structures with which the oral cavity can perform the three functions of mastication, aesthetics, and pronunciation [21]. If one of these functions is abnormal, normal social life will be difficult. Therefore, the importance of preventing oral diseases has been emphasized because oral morbidity causes oral cavity dysfunction.

Dental caries is a disease caused by the oral bacteria that leads to tooth structure destruction and loss. S. mutans, a bacterium that produces acids on the teeth’s enamel surface, forms an insoluble glycoprotein membrane with sugar as a nutrient, and minerals are demineralized over time due to the high acidity of the dental plaque [22]. The inhibition methods for dental caries include the mechanical removal of the dental plaque; the use of non-or low-dental-carries-inducing sweeteners, including dietary life improvement; the use of antimicrobial agents and dental plaque inhibitors; and the development of vaccines against microbes causing dental caries [23].

Since recently, there has been a growing interest in oral therapeutic agents that can be used safely, without the usual side effects of drugs. In particular, research on and development of next-generation antibacterial materials with selective effects on oral bacteria are further demanded. There is also a growing interest in natural substances that can be used for the prevention of dental caries or periodontal diseases, which are associated with dental plaque, and the interest in natural antimicrobials as next-generation antibiotic materials is increasing [24].

Therefore, this study was conducted to investigate the antimicrobial effect of Glycyrrhiza uralensis extract on S. mutans, which causes dental caries, and to develop a natural antimicrobial substance that is effective for the prevention and treatment of dental caries and that has less side effects and tolerance.

Based on the above results, it was confirmed that Glycyrrhiza uralensis extract, among the natural extracts, has a definite antimicrobial effect on S. mutans. It will contribute to oral health promotion as a safe and effective natural antimicrobial agent for anti-dental caries.

The authors report no conflict of interest related to this study and no financial interest in the companies whose materials are included in the article.