We herein report the anti-cancer activities of some synthesized pyridine derivatives substituted with thiazole, pyrazole and triazole moieties. A series of these derivatives 1-12 were synthesized and evaluated as anti-inflammatory, analgesic, anticonvulsant and antiparkinsonian agents before. Twelve compounds were conveniently screened for their in vitro cytoyoxicity against a wide rannge of cell lines and they are also showed potent activities against renal and prostate cancer cell lines. The in vivo antirenal cancer and antiprostate cancer of the most active in vitro compounds was estimated and founded highly potent. In search for the mechanism of action of anticancer activities it was foundeded that these compounds exert its action via histone decarboylase inhibition and inhibition of p53 ubiquitination.

Thieno[2,3-b]pyridine candidates which substituted with pyridine, cyclopentyl, tetrahydroquinoline, pyrimidine, 1,6- naphthiridin, benzofuro[2,3-b]pyridine, imidazo[1,2- c]pyrimidine, triazolo[1,5-a]pyrimidine were synthesized and used a new agents for their in vitro antitumor activities against liver HepG-2 and breast MCF-7 cell lines [1-3]. Many pyridine derivatives were synthesised and foundeded to have cytotoxic activities in vitro against a wide range of cell lines especially renal and prostate types [4]. Imidazopyridine derivatives have potent antitumor activities [5]. In addition, two series of 4,6- diaryl-2-imino-1,2-dihydropyridine-3-carbonitriles and imidazo[2,1-b]pyridine/ pyrimidine chalcones were also synthesized and evaluated for their in vitro capacity to inhibit PDE3A and the growth of the human HT-29 colon adenocarcinoma tumor cell line [6-8]. In view of these observations and in continuation of our previous work [9-16] in biological and pharmacological studies for heterocyclic candidates, we herein reported the anti-cancer activities of some heterocyclic substituted pyridine derivatives.

All the tested compounds 1-12 were confirmed by physical and spectroscopic evidences according to the previously reported procedure [16].

The cytotoxicity of the newly synthesized compounds against cancer cell lines in vitro was performed with the MTT assay according to the previous reported method [17].

In vivo determination of the cytotoxic activities

Effects of compounds tested compounds on prostate cancer in vivo

To investigate the effect of tested compounds on prostate cancer cells in vivo use the adopted methods [18,19].

Xenograft model: The experimental method which was used in xenograft model has been adopted from Liang et al. [21].

The data were expressed as means plus; standard deviation (s.d.). Statistical analysis was performed by Student's t-test (two-tailed). The criterion for statistical significance was taken as P<0.05.

In continuation of our previous work, a series of substituted pyridine, pyrazole, triazole and thiazolotriazole derivatives 1-12 (Figure 1) were synthesized before and screened as anti-inflammatory, analgesic, anticonvulsant and antiparkinsonian agents [16]. Herein, we report the activities of these compounds for evaluation as anticancer agents. 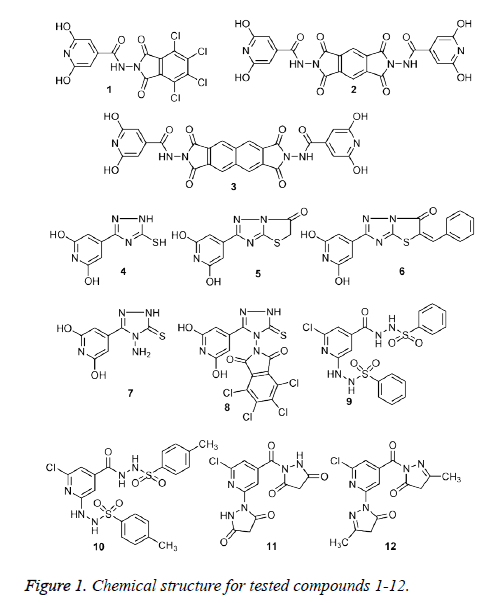 The cytotoxicity of the newly synthesized compounds against cancer cell lines in vitro was performed with the MTT assay according to the previous reported [17].

In this study, from table 3 compounds 1-12 were used to test the effect on renal cancer cell lines. As shown in table 3, treatment with tested compounds reduced cell viability of renal cancer cells (OUR-10) in a time-dependent manner [18].

Table 3: Cytotoxic effect of treatment with tested compounds 1-12 against OUR-10.

We examined whether tested compounds could inhibit the growth of OUR-10 tumors in mice. We selected an injection dose of 7 μM/Kg 3 times per week because this dose effectively inhibited in vivo OUR-10 tumor growth without adverse effects in a preliminary study. About 6 weeks after the start of treatment with compounds 12, 11, 9, 10, 8, 7, 6, 5, 4, 3, 2 and 1, the increase in OUR-10 tumor volume was measured and given in table 4. The in vivo antirenal cancer activities of the tested compounds were estimated and culminated on the tested compounds exerts potent anti prostate carcinoma in the following descending order 12, 11, 9, 10, 8, 7, 6, 5, 4, 3, 2 and 1.

In search for the mechanism of action of the anticancer activities of the tested compounds the author's resorts to many in vitro assays for many targeted enzymes and cancer modulation molecules, these experiments revealed on the following two mechanistic pathways.

In vitro Inhibition of histone deacetylase

Table 6: IC50 of p53 ubiquitination of the newly synthesized compounds 1-12 (in vitro).

All tested compounds inhibited in vivo prostate and renal carcinoma via inhibition of the histone decaroxylase and inhibition of p53 ubiquitination also inhibited the EGFR and VEGFR-2 kinase.

• Fusion of another heterocyclic ring system into the triazole ring greatly reduces the activities.

• Macrocyclic moieties and polychloro ones greatly reduces the activities.

The authors would like to extend their sincere appreciation to the Deanship of Scientific Research at King Saud University for its funding of this research through the Research Group project no. RGP -172.