Antibacterial effect of Hibiscus sabdariffa (Roselle) extract in synergism with voriconazole and fluconazole against fluconazole-resistant Candida albicans isolates: An in vitro study.

According to reports, Candida albicans is believed to be the leading cause of fungal urinary tract infections, otherwise known as Candiduria. Prevention of candiduria using natural products is desirable and should be investigated. The current study reports the antimicrobial effect of H. sabdariffa (Roselle) extract, a common herbal drink, in combination with voriconazole or fluconazole against C. albicans isolates. Six strains of fluconazole-resistant C. albicans isolates were obtained from patients with recurrent candiduria. The interaction of H. sabdariffa with voriconazole and fluconazole was investigated using checkerboard tests. When the extract was used in combination with voriconazole, a high degree of synergism was observed and it proved to be an encouraging agent against fluconazole-resistant C. albicans, in vitro. On the other hand, the extract showed indifferent effect with fluconazole. No antagonistic interaction was however, detected in the tested isolates. Further study is required to determine the mechanism of the synergistic action

During the past years, there has been a worldwide increase in incidences of candidal urinary tract infections (UTIs). C. albicans is reported to be the leading cause of fungal UTIs, also known as Candiduria [1]. The increase in candidal UTIs is, in part, due to the widespread use of broad-spectrum antibiotics and the increasing numbers of immunocompromised patients [2]. Candiduria has raised fears with the international infectious diseases society because of the limited therapeutic choices. The limited success over the previous decade in the prevention and control of fungal UTIs highlights the difficulty of preventing the infection once it has been established [3]. Fungal UTIs may result in serious complications if treated inadequately [4].

Treatment of Candiduria infections is becoming increasingly difficult due to antifungal drug resistance, especially with fluconazole, which is the most commonly used azole for treating candidal UTIs. Monotherapy with other drugs also encounters the same problem [5,6]. Hence, either a combination of current antifungal drugs with natural products or the development of new drugs is critical for the future and present therapy of fungal infections [2].

Here lies the need to search for alternate safe and effective new natural antifungal agents that have limited or no side effects. The current study was undertaken to evaluate the in vitro synergistic action between H. sabdariffa extract alone and in combination with fluconazole and voriconazole against fluconazole-resistant C. albicans isolated from recurrent UTIs.

H. sabdariffa is a popular herbal drink consumed by people around the world and is used in traditional medicine for the treatment of urinary tract infections and hypertension. The brew, usually known as ‘karkade’, is made from the calyces of the H. sabdariffa. A few studies have been carried out to assess the antifungal activities of this plant against some of common human pathogens [7,8]. However, no studies have reported the combination effect of this extract with other antifungal agents.

Air-dried Hibiscus calyces were purchased from the local market. The identity of the calyces was confirmed by comparing the collected specimens with those of a known identity. The extracts were prepared according to a previously described protocol [9]. Using 1L of 80% aqueous methanol (BDH, UK), the phenolics were extracted from 100g of the grinded calyces. The mixture was then sonicated for 20 minutes and then filtered through Whatman no.2 filter paper. The solvents were then evaporated using a rotary evaporator at 40°C under reduced pressure and the extracts were stored in tightly, sealed glass vials and considered to be H. sabdariffa extract, which was then used for the antibacterial assays

Antimicrobial activities of fluconazole, voriconazole and the extract were determined according to the approved CLSI standard reference method [10]. MIC plates were incubated at 35°C for 48hrs. MICs were defined as the lowest concentration of the drug inhibiting cell growth using MIC-0. MIC-0 was defined as the lowest drug combination resulting in optically clear wells. 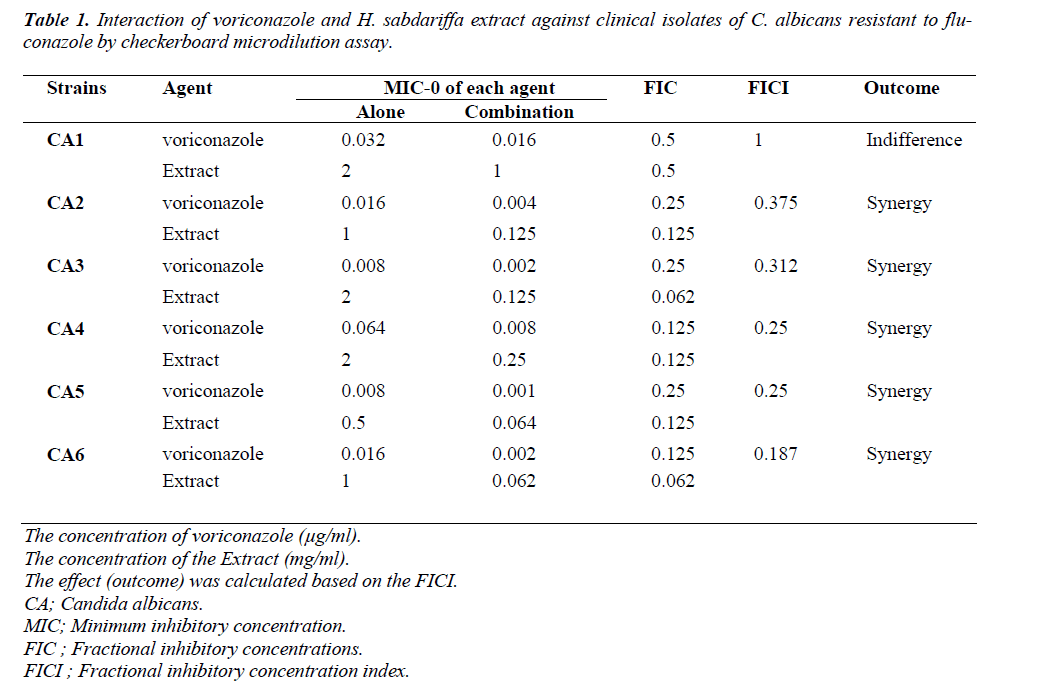 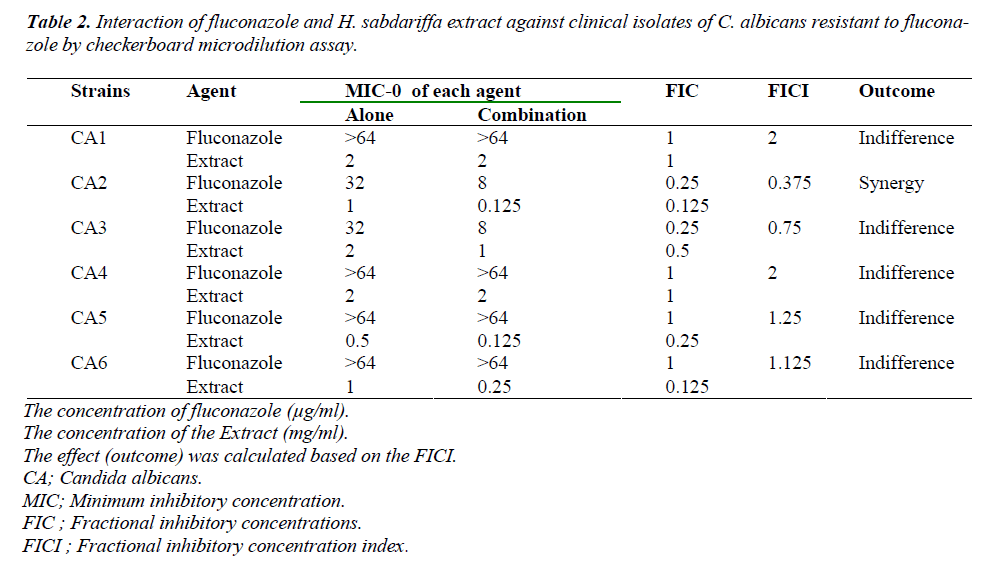 We observed that when the extract was associated with voriconazole at different concentrations, there was a reduction of the voriconazole MICs. Table 2 shows the results of the FICIs for the strains tested. In all of the six strains, there was a strong synergistic effect demonstrated by the FICI calculation

So far only a few studies have been carried out to assess the antimicrobial activities of H. sabdariffa extract against common fungal pathogens [7,12,13].

The high potency of H. sabdariffa against these strains is the basis for its use in traditional medicine for treating and preventing UTIs. The mechanism of this action is not completely understood but it has been proposed that the extract contains phenolic compounds including flavonoids and cyaniding which have been reported to exhibit antimicrobial activities [14-16].

Our findings are encouraging in view of the growing treatment failures and antifungal resistance to Candida and suggest a way of treating resistant Candiduria infections through a drug combination approach using natural plant extract.

The antifungal activities of the H. sabdariffa extract that were observed provide basic evidence for the potential effects of this plant for preventing recurrent candiduria caused by C. albicans in combination with traditional antifungal drugs.

In conclusion, when used in combination with voriconazole, the extract is an encouraging and safe agent against fluconazole-resistant C. albicans in vitro but further studies are required to determine the mechanism of the synergistic action. It also highlights a significant approach of the plants extract as an antifungal agent. Although the antimicrobial effect of H. sabdariffa has been shown in vitro, further studies with a more robust methodology would be needed in order to determine the clinical efficacy of the extract to prevent recurrent UTIs. Future studies with a larger number of strains and resistant isolates are of immense importance. Our studies will continue in order to explain the mechanism of action and effects of extract.

The authors acknowledge the Deanship of Scientific Research of Taibah University for providing funding for this research. We are also grateful to Mr Mohamed Abdulsamad and all the staff in the Department of Medical Microbiology, Ohad Hospital who made a great effort to collect and identify the fungal isolates.