Oral-resident bacteria cause various diseases in the oral cavity, and studies have been conducted to inhibit the activities of many of such bacteria. This study was conducted to investigate the antibacterial effect of the natural extract Forsythiae fructus against the oral-resident bacteria Streptococcus intermedius (S. intermedius) and Streptococcus gordonii (S. gordonii), characterized by antiinflammation and antimicrobial activity. The clearzone confirmation method was used to test the antimicrobial activity, and the number of colony-forming units (CFUs) was checked to measure the bacterial proliferation. For the experiment, 5, 10 and 20 mg/mL of Forsythiae fructus extract were set as the experimental groups, and the group without any treatment was set as the control group. For the results of the antimicrobial activity testing, the size of the clear zone became larger as the concentration increased from 5 to 10 and 20 mg/mL compared to the control group. As for the results of the CFU measurement, many bacteria were observed in the control group while no bacteria appeared in all the experimental groups. Therefore, the present study confirmed the antibacterial effect of Forsythiae fructus extract in the oral cavity, which could be used as basic data for the development of antimicrobial agents using natural extracts against oral-resident bacteria.

The oral cavity has an environment suitable for the proliferation of bacteria, thus always having resident bacterial communities where various bacteria settle. It is also a place where invasion of microorganisms occurs through direct contact with the outside [1]. In the oral cavities of ordinary people, more than 30 species of bacteria are usually isolated, and they appear in various forms depending on the age, health level, dietary level, and hygiene level [2].

The pathological mechanisms that can be caused by oral microorganisms include dental caries, periodontal disease, and missing teeth [3]. These bacterial diseases are developed through the following mechanism. The acid is generated in the process where large amounts of Viridans streptococci and lactobacilli break down the sugars remaining in the oral cavity, and the acid produced is attached to the tooth surface, dissolving or demineralizing the inorganic substance, and eventually destroying the dental tissue [4]. Many studies have attempted to classify Viridans streptococci, and they are known as consisting of four groups: Anginosus (S. nginosus, S. constellatus, S. intermedius), Mitis (S. oralis, S. mitis, S. gordonii, S. sanguinis, S. parasanguis), Salivarius (S. vestibularis, S. salivarius), and Mutans (S. mutans, S. sorbinus) [5]. These bacteria have been reported to be present as resident bacteria in the oral cavity, gastrointestinal tract, and female genital organ, and to cause bacteremia and endocarditis through opportunistic infection [6,7].

Forsythiae fructus is a forsythia fruit of the forsythia plant belonging to Oleaceae, and is known to mainly contain lignans, such as phillyrin (forsythin), phillygenin, (+)-pinoresinol, and (+) pinoresinol-β-d-glycosides [8]. The pharmacological actions of Forsythiae fructus have been known as antiinflammation, antipyretic action, liver function protection, and vasodilation. Previous studies have been conducted on the antimicrobial activity, whitening function, suppression of production of inflammatory mediators, and antioxidant-related antiviral agents of Forsythiae fructus extract [9-11] but the studies on its effects against the causative bacteria of dental caries and periodontal diseases have been limited.

Therefore, this study was conducted to investigate the antimicrobial activity of Forsythiae fructus ethanol extract against the causative bacteria of dental caries and periodontal diseases to identify its efficacy and determine its usability for the development of various oral hygiene products for the prevention of oral diseases [12,13].

S. intermedius (ATCC 9895) and S. gordonii (ATCC 10558) were purchased from Korean Culture Center of Microorganisms (KCCM). Each microorganism was activated at the BHI and was diluted at a 1 × 106 ratio.

To test the antimicrobial activity of Forsythiae fructus extract, 100 μL (1 × 106) each of S. intermedius and S. gordonii was applied on a solid medium, respectively, and after the bacteria were absorbed, 100 μL of each experimental group was dropped onto the paper disc carefully placed on the solid medium. After keeping such paper disc in a 37°C bacterial incubator for 24 hours, the diameter of the clear zone was measured. The average value and standard deviation were obtained after three repeated experiments to measure the diameter of the clear zone, where the bacterial activity was inhibited. Only the average value was recorded, however, because the degree of deviation was insignificant.

To measure the bacterial proliferation, the media for the bacteria (1 × 105) were mixed at a ratio of 9 (BHI):1 (bacteria). Then the resulting mixture was mixed with the extracts prepared at 5, 10 and 20 mg/mL concentrations, and 100 μL of each mixture was inoculated into the solid medium. After keeping the final mixture in a 37°C bacterial incubator for 24 hours, the number of colony forming units (CFUs) was checked.

The results of the antimicrobial activity test of Forsythiae fructus extract against S. gordonii and S. intermedius showed that many bacteria survived in the control group, which had no treatment, but no bacteria were observed overall in the 5, 10 and 20 mg/mL experimental groups (Figures 1-4). 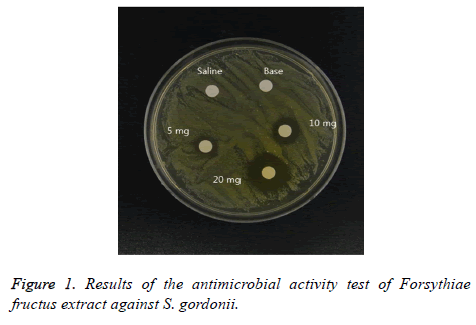 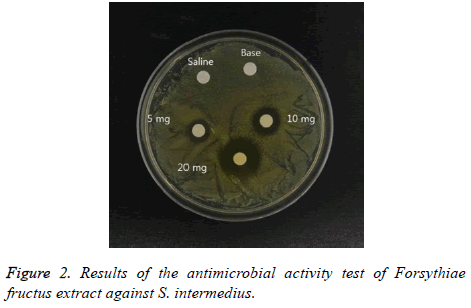 In relation to the antimicrobial activity of a natural product against oral microorganisms, funoran, a substance extracted from algae, has been reported to have an excellent antibacterial effect on dental-caries inducing bacteria [14]. Several natural extracts, such as green tea, propolis, flavonoids, chitosan, Akebia quinata, cinnamon, Ulmus davidiana, and Schisandra chinensis, have been reported to inhibit the development of dental plaque disease [15,16]. In addition, grapefruit seed, cassia seed, and Korean angelica root showed an anti-caries effect [17]. Among the 105 kinds of herbal medicines, Korean Aristolochia fruit, buckler fern, dried clove buds, Hemerocallis fulva, pinellia, Adonis amurensis, and Scrophularia root have been reported to have an excellent growth inhibitory effect against dental-caries-inducing bacteria [18]. There have been few studies, however, on the anti-caries effect of Forsythiae fructus, the natural substance that was used in this study.

Therefore, Forsythiae fructus extract showed a remarkable antibacterial effect against the dental-caries inducing bacteria S. intermedius and S. gordonii, suggesting that it could have an anti-caries effect, preventing or alleviating dental caries.

In this study, Forsythiae fructus ethanol extract, which is known to have antimicrobial, antiviral, and anticancer effects, was proven to be effective through the measurement of the clear zone and colony-forming units (CFUs) to confirm its antimicrobial activity against the oral-resident bacteria Streptococcus intermedius (S. intermedius) and Streptococcus gordonii (S. gordonii). Forsythiae fructus extract revealed the largest clear zone when 20 mg/mL of it was applied to the two aforementioned bacteria, and the death rate of the said bacteria was improved according to the concentration. If these study results lead to the development of an oral product that can prevent and treat dental caries, one of the typical oral diseases, it can be used as an alternative to maintain and promote oral health. The development of complex extracts containing Forsythiae fructus rather than single extracts through continuous research will promote the growth of oral hygiene products.

This study was supported by the Basic Science Research Program through a National Research Foundation of Korea (NRF) grant funded by the Ministry of Science, ICT, and Future Planning (2017R1C1B5074410).