Lichens are the result of beneficial association of both algae and fungi and have various uses in the field of biomedical application. It can able to grow in the different climatic conditions with slow growth. The aim of this study is to evaluate the antibacterial and antioxidant activities of Parmotrema reticulatum obtained from Yercaud hills of southern India. P. reticulatum was extracted with different solvents such as petroleum ether, ethyl acetate, ethanol, methanol, acetone and water based on their polarity. Then, it was subjected to antioxidant assays such as 1,1-diphenyl-2-picrylhydrazyl (DPPH) and ferric reduction activity potential (FRAP). The lichen species exhibited strong antioxidant activity with IC50 of 19 μg/ml of DPPH and a higher absorbance value of 0.643 ± 0.003 for FRAP assay. A better pathogenic control was observed in acetone extracts with a 22 mm zone of inhibition for both Bacillus subtilis and Escherichia coli, 15 mm for Staphylococcus aureus and 14.33 mm for Klebsiella pneumonia. On the contrary, water extracts showed less inhibition activity against human pathogens. The methanolic extracts of P. reticulatum exhibited better activity for antioxidant studies. It may be the presence of bioactive compounds which leads to scavenging the free radicals.

Lichens are formed as a result of a mutualistic association between a mycobiont (fungus) and a photosynthetic partner, photobiont, usually either a green alga (Trebouxia) or cyanobacterium (Nostoc) [1]. The most common fungal association (i.e., 46%) in the lichens is formed by ascomycetes, which is five times of that found in other known fungi [2]. India is rich in lichen diversity, contributing approximately 15% of the 13,500 species recorded so far globally [3]. Lichens and their derivatives had been used in traditional medicines by ancient people and it still holds a considerable interest as an alternative resource in various parts of the world. A large number of secondary metabolites were produced by lichens and their symbionts [4]. Some of the lichen compounds showed antimicrobial activity and also have other biological properties including antioxidant, anticancer, antiviral, anti-inflammatory and anti-proliferative effect [5,6].

The aim of this study was to focus on the usage of lichen-derived compounds in novel drug discovery because of their antioxidant properties. Oxidative stress or free radicals play a major role in developing cancer and also various diseases in human. Free radicals are the unpaired or unfilled electrons produced from normal as well damaged cellular metabolism. Excess amount of free radicals causes different pathological diseases such as cancer, diabetes, inflammation and regenerative disorders in the living system [7]. The best way to treat various diseases is to use of antioxidant compounds. Plant-derived antioxidant compounds are the natural compounds that can be more effective in capturing free radicals and acting as reducing agents [8]. To emphasize the use of lichen-induced antioxidant molecule, which has the capacity of controlling free radicals, is a big advantage for the current medicinal chemistry. Hence, this work was undertaken with the objective of studying the antibacterial and antioxidant properties of Parmotrema reticulatum (Taylor) M. Choisy and its chemical profiling as a lead compound for drug development.

P. reticulatum belongs to Parmeliaceae family, which has the secondary metabolites of atranorin and chloroatranorin in the upper cortex and salazinic and consalazinic acids in the medulla region [9]. They are most commonly found on rocks and also on trees in open habitats.

Collection and identification of lichen samples

The lichen specimens were collected from Shevaroy hills of Eastern Ghats (Tamil Nadu, India) with an altitude of 1400 MSL and a latitude of 11°48′ N and longitude of 78°13′ E. The specimens were identified by assessing the morphology, anatomy and color and also by conducting thin layer chromatography (TLC) [10]. The identified species was separated and maintained at 4°C for further use.

Lichen specimens were shade-dried at room temperature for 3 days. The dried lichen was grounded to powder form and the powder was extracted in a soxhalet apparatus using sequential extraction with different solvents of increasing polarity (Petroleum ether, ethyl acetate, ethanol. Methanol, acetone and water) for about 5 h. Further, the solvent was removed by using rotatory evaporator with controlled temperature (Supervac, India). Then the crude extract powder was obtained which was used for further study [11].

Chromatography analysis of the lichen extracts

Lichen compounds in different solvent extracts were subjected to TLC to identify the active components. The extract powder was spotted onto the TLC plate using a capillary tube. The TLC plate, which contained toluene/1,4-dioxane/acetic acid (180:45:5), was kept in the TLC chamber for 1 h. Then the plate was air-dried and sprayed using 10% sulfuric acid solution. Charring was carried out to visualize the color as well as the separation pattern of compounds present in the extract.

DPPH free radical scavenging activity: The antioxidant activity of different concentrations of lichen extracts and ascorbic acid was tested on the basis of the scavenging effect of the stable 1,1-diphenyl-2-picrylhydrazyl (DPPH) free radical activity [12]. DPPH (0.004%) in methanol was used as the free radical; 2 ml DPPH solution was mixed with 2 ml of different concentrations of methanol extract. The tubes were incubated at room temperature in dark condition for 30 min and the optical density was measured at 517 nm using a UV-Vis spectrophotometer (U-2900; Hitachi, Japan). The absorbance of the control (containing no sample) was also noted. The percentage of scavenging activity was calculated using control.

FRAP assay: Different concentrations of lichen extracts were mixed with 2.5 ml phosphate buffer (200 mM, pH 6.6) and 2.5 ml of 1% potassium ferricyanide [13]. The mixture was placed in a water bath for 20 min at 50°C, cooled rapidly and mixed with 2.5 ml of 10% trichloroacetic acid. Then, the supernatant was added with 0.5 ml of 0.1% ferric chloride. The amount of iron (II)–ferricyanide complex formed was determined by measuring the formation of Perls’ Prussian blue at 700 nm. The higher absorbance of the reaction mixture indicates greater reducing power.

Antibacterial activity: Staphylococcus aureus, Escherichia coli, Bacillus subtilis and Klebsiella pneumonia were procured from National Centre for Industrial Microorganism (Pune, India). The bacteria were aseptically swabbed on sterile Muller–Hinton agar plates. Wells of 0.5 cm diameter were made aseptically in the inoculated plates and petroleum ether, ethyl acetate, ethanol, acetone, methanol and water extract of lichens (standard Chloramphenicol and Ampicillin) were added into the labelled wells. The plates were incubated at 37°C for 24 hr in upright position. The experiment was carried out in triplicate and the zone of inhibition was measured [14].

The total phenolic content of P. reticulatum was estimated by following the method suggested by Slinkard and Slingleton [15]. The extracts were prepared at a concentration of 1 mg/ml and 1 ml Folin-Ciocalteu reagent (1:1) and 3 ml Na2CO3 (2%) were added at an interval of 2 h until it became purple. Color intensity was measured at 760 nm using a UV-Vis spectrophotometer (U 2900; Hitachi) and Gallic acid was used as a standard.

TLC showed the presence of various lichen metabolites with corresponding Rf clauses. Spots 12-17 represented crude fraction of P. reticulatum in different solvents (Figure 1a and 1b). All the crude fractions showed the presence of salazinic acid (orange) with Rf clause 2. Spots 14-16 showed the occurrence of consalazinic acid with Rf clause 1 in minor concentration. In the case of methanol extracts, five compounds were observed with different clauses namely, consalazinic acid, salazinic acid, atranorin (yellow with Rf 7 clause) and two unidentified spots. Similar pattern was also observed in the acetone extracts of P. reticulatum [16]. 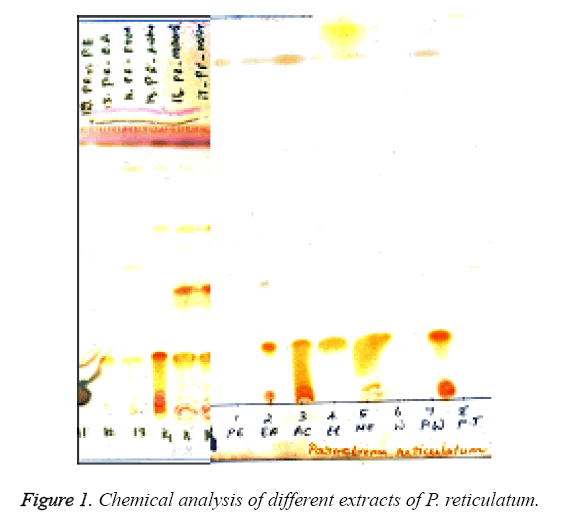 Among all the lichen extracts, acetone extract showed highest antibacterial activity followed by ethanol and methanol extracts (Table 1). The result indicated that methanol extracts revealed highest zone of inhibition of 23 mm and 27.8 mm against B. subtilis and E. coli whereas acetone extracts the zones of inhibition formed were 22 mm for both B. subtilis and E. coli; 15 mm for S. aureus and 14.33 mm for K. pneumonia. On the contrary, water extracts showed less inhibition activity against human pathogens. Other extracts such as petroleum ether, ethanol and methanol extracts of P. reticulatum expressed moderate activity. Acetone extract was found superior to the standard antibiotic ampicillin and inferior to the chloramphenicol extract against the tested microorganism.

DPPH free radical scavenging activity: The DPPH free radical scavenging activity of lichen extracts using different solvents was found to increase while increasing the concentration of extracts (Figure 3). Methanol extracts of P. reticulatum showed highest activity of capturing hydrogen free radicals than the other extracts. The IC50 value was found to be 19 μg/ml, indicating the presence of bioactive molecules. The free radical capturing activity was found to be increased in the order of methanol>petroleum ether>water>acetone>ethanol>ethyl acetate extracts of P. reticulatum. The result revealed that methanol extract has the similar potential as that of ascorbic acid. In contrast, very less antioxidant activity was observed in the extract of ethyl acetate and it was measured as the inhibition of 32.8% at 100 μg/ml (Figure 2). 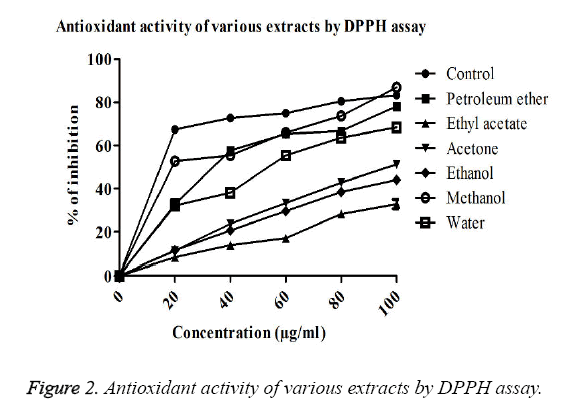 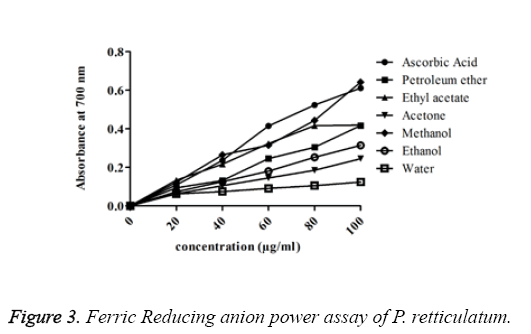 FRAP assay: The chelating ability of different solvent extracts of P. reticulatum on ferric ions was measured and was shown. The absorbance was found to be increasing with an increase in the concentration of various extracts of lichen and the activity was higher in the ethanol extracts among all other extracts. The order of activity was methanol>ethyl acetate>petroleum ether>ethanol>acetone>water. The absorbance value of methanol extract was with a minimum error value of 0.643 ± 0.003 and it was suggested as a higher activity.

Kosanic et al. studied the antioxidant properties of selected lichens from Serbia. The methanol extracts from lichen Umbilicaria polyphylla showed largest DPPH radical scavenging activity (90.08%), for U. crustulosa and Parmeliopsis ambigua it was 79.85% and 73.66% respectively [17]. The lichens species Lecanora muralis and Parmelia saxatilis showed slightly weaker DPPH radical scavenging activities (61.28% and 55.55%). These results coincide with our study results in which methanolic extract of lichen P. reticulatum showed higher scavenging activity when compared with other extracts. For the reducing power assay, the absorbance values varied from 0.066 to 0.089. The methanol lichen extracts decreased in the following order for the reducing power assay: P. ambigua>L. muralis>P. saxatilis>U. polyphylla>U. crustulosa. The reducing power was found to be higher than the previously reported results. The phenolic content of the various extracts of P. reticulatum directly influenced the antioxidant activity of both free radical capturing and reducing power of metals. The result was supported by Abdelaaty (that the phenolic substances are responsible for the reproduction of high antioxidant activity [18]. On the basis of the antioxidant study using DPPH, Zohera et al. reported that the ethyl acetate extract of Celastrus paniculatus showed the highest reducing power followed by methanol and water extracts [19]. The ethanol extracts of Wrightia tomentosa bark showing the highest reducing power of 0.690 absorbance value at 800 μg/ml were reported by Nagarajan et al. [20]. Using FRAP assay, Kekuda et al. concluded that the methanol extract of lichen P. pseudotinctorum showed antioxidant activity in a dose-dependent manner with high absorbance values [21].

Dharmadhikari et al. reported the acetone extracts of lichen P. simplicitor to be effective against S. aureus, Pseudomonas aeruginosa, B. subtilis, B. megaterium, E. coli and Candida albicans [22]. Behera reported that the acetone, methanol and petroleum ether extracts of lichen Usnea ghattensis were effective against B. licheniformis, B. megaterium and S. aureus [23]. According to Kosanic et al. the antibacterial activity was found to be most active in the methanol extract of U. polyphylla with minimum inhibitory concentration (MIC) values ranging from 0.78 to 1.56 mg/ml when compared with the other lichen species [17]. According to the study conducted by Sati et al. the chloroform extracts of P. nilgherrense showed highest activity against all the tested organisms followed by ethanol and methanol extracts [24]. The aqueous extract did not show any inhibitory effect. The results of the antibacterial activity were not in line with the previously reported results claiming acetone extracts to have inhibitory activity against the tested organism in our study. Srivastava et al. reported that U. ghattensis inhibited the growth of both gram-positive bacteria and one gram-negative bacterium [25]. U. ghattensis showed that MIC values varied between 25 and 3.125 μg/ml.

The authors are thankful to Indian Council of Medical Research, New Delhi for supporting the financial assistance. The authors are very grateful to management of K.S. Rangasamy College of Technology, Tiruchengode, India for providing and establishment of the work and also thankful to Dr. D.K. Upreti, NBRI, Lucknow, India for helping the lichen species identification.