Oral diseases have been presented as continuous health problems worldwide [1]. Dental caries and periodontitis are two of the serious oral diseases threatening the oral health of modern people [2]. Therefore, the interest in oral hygiene management has been rising to prevent diseases related to the presence of bacteria in the oral cavity, such as inflammation in the oral region [3].

There is an association between oral diseases and the microorganisms in the oral cavity [4]. Dental caries occurs due to bacteria like Streptococcus mutans or Streptococcus sobrinus, and periodontitis is associated with gram-negative bacilli like Porphyromonas gingivalis, Actinobacillus actinomycetemcomitans, and Fusobacterium nucleatum. These bacteria are frequently found in periodontal lesions, and studies on their association with the onset and progression of periodontal diseases have been reported [5]. When dental hygiene becomes poor, the bacterial growth increases locally, and the balance between the host’s resistance and the microorganisms’ pathogenicity is threatened, leading to a disease. The infection caused by the normal flora in the oral cavity is called “intrinsic infection,” and actinomycosis or candidiasis is the most representative intrinsic infection [6].

Oral candidiasis is a fungal opportunistic infection caused mostly by Candida albicans (C. albicans) among the candida types, and exists without any clinical symptom of mucosal disease in about 60% of healthy adults [7]. Although C. albicans exists in the oral cavity in a non-pathogenic state, it can cause infection due to the many factors that cause immunosuppression of the host, and can cause opportunistic infection when it attaches to the oral epithelial cells or dentures [8]. Antifungal agents for decreasing C. albicans have been developed, and the representative antifungal agents used for treatment are amphotericin B, miconazole, nystatin, and chlorhexidine [9]. Nystatin is the most commonly used for candidiasis, but it is difficult to use due to its bitter taste and nasty flavor [10]. In addition, chlorhexidine (CHX) has a bitter taste and causes a burning sensation in the mucosa; in addition, it has been reported that its effect significantly decreases when organisms exist [11]. CHX has limited usability in patients due to the continuing reports on how it adversely affects the patient’s sense of taste or causes teeth discoloration [12]. Furthermore, although some antibiotics used for treatment are safe when used with the common doses, some have life-threatening side effects [13]. “Antibiosis,” which may exist among microorganisms, means the prevention of growth or the life of another microorganism [14]. Antibiotic use in early childhood is associated with various health problems, including worsening allergic disease, obesity, and inflammatory bowel disease [15].

Considering the foregoing, the interest in traditional plants or natural substances has increased of late for use in the prevention and treatment of oral diseases without any harmful effect on the human body [16]. Lespedeza cuneata is a perennial plant belonging to the legume family that has various names, including bisuri and samyupcho, and is distributed in South Korea, Japan, China, Taiwan, etc. It is a very common plant used for creating a surface cover and for soil fertility improvement in a desolated land, and has been used as an herbal medicine that effectively treats sexual impotence, premature ejaculation, ganacratia, cough, and asthma [17]. Lespedeza cuneata has a bitter and spicy taste and a warm character, does not have toxicity, and can be administered using various methods [18]. Furthermore, it has been reported to have an antioxidant effect, and it is known that the appropriate intake of antioxidants can reduce the risk caused by oxidation [19].

Dried Lespedeza cuneata produced in Sancheong country in South Gyeongsang Province was purchased from Jirisan Cheongjeong Yakcho Ltd. It was then put into 80% ethanol about 5 times its amount and was stored for 24 h at 60°Ϲ. The supernatant was then collected and was filtered using filter paper (filter paper grade no. 2); it was concentrated after separating the ethanol using a rotary vacuum evaporator (N-1300E.V.S EYELA Co., Japan). The Lespedeza cuneata was dried using a freeze dryer (FD5508, Ilshin Lab, Yangjukun, Kyunggi-do, South Korea) and was applied after being dissolved in dimethyl sulfoxide (DMSO, Sigma-Aldrich, St. Louis, Missouri, USA).

A paper disc was placed on top of YM agar medium, and 100 μl Lespedeza cuneata extract was applied at 1.25, 2.5, 5, 10, and 20 mg/ml concentrations, respectively. After culturing for 24 h, a formed growth inhibitory area was identified.

Measurement of the colony-forming units (CFUs)

Measurement of the clear zone 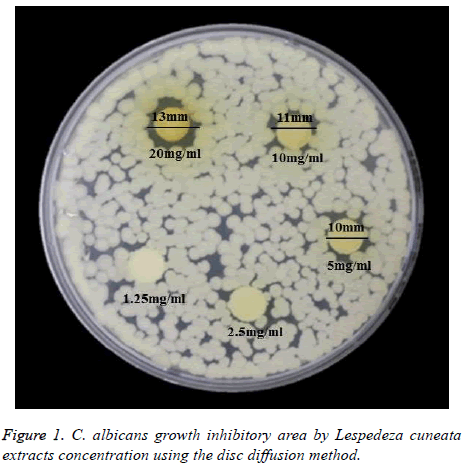 Number of CFUs for antibacterial-effect evaluation

It was confirmed that the antibacterial effect of Lespedeza cuneata extract became stronger as its concentration increased from 1.5 mg/ml to 2.5, 5, 10, and 20 mg/ml (Figure 2). 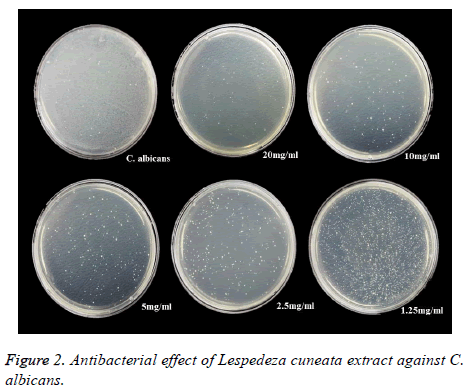 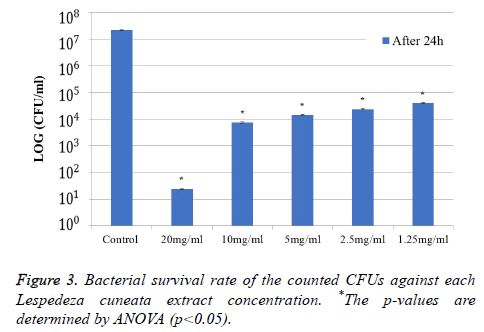 Figure 3: Bacterial survival rate of the counted CFUs against each Lespedeza cuneata extract concentration. *The p-values are determined by ANOVA (p<0.05).

Although antibiotics are generally used to prevent and treat oral diseases, several side effects have been reported. Excessive use of chemical agents can result in unwanted side effects, such as infection from other bacteria, vomiting, or diarrhea [26]. It has been reported that other antimicrobialcontaining chemical agents can show toxicity or cause teeth discoloration and an association between oral cancer and ethanol, which is commonly found in typical mouthwashes, has been reported [27]. When a potent chemical agent is added, however, the pathogens and normal flora in the oral cavity may be eliminated. Therefore, the use of natural extracts has been recommended to inhibit the growth of pathogenic bacteria while maintaining the normal flora in the oral cavity [28].

For the foregoing reasons, studies on natural antifungal substances that can be used to prevent disease or inhibit disease progression have been reported of late [29]. Seong et al. [20] reported that gallnut extract using methanol showed antifungal activity against C. albicans. Shin et al. [21] investigated the antifungal activity of raspberry extract at various concentrations (2, 4, 8, 15, 30, 60, and 120 mg/ml) against C. albicans and reported that bacterial growth inhibition was shown from the 8 mg/ml concentration of the extract. Choi et al. [22] applied Acanthopanax sessiliflorum extract against C. albicans, and the results showed an antibacterial effect at 20 mg/ml while no bacteria were observed at 50 mg/ml.

Therefore, it is suggested that applying Lespedeza cuneata extract to the oral cavity with oral candidiasis can alleviate the problems and side effects of the use of the existing antibiotics, and can be used for the treatment and prevention of oral candidiasis. It is expected that Lespedeza cuneata extract will be used as a natural antibiotic substance and will become the next-generation preferred antibacterial agent.

This research was supported by Basic Science Research Program through a National Research Foundation of Korea (NRF) grant funded by the Ministry of Science, ICT, and Future Planning (2017R1C1B5074410).