Nucleoside reverse transcriptase inhibitors (NRTIs) form important component of anti- retroviral therapy (ART) regimens for HIV/AIDS patients in low income countries. These drugs, especially stavudine can induce potentially life threatening lactic acidosis. It is very important to detect the early symptoms of lactic acidosis so that the life of the patient can be saved by prompt withdrawl of ART coupled with vigorous management of hyperlactatemia. Lactic acidemia directly attributable to NRTIs has been rarely reported in Indian studies. Here we report 6 HIV- positive patients who have been on ART comprising NRTIs and developed lactic acidosis. All these patients were admitted for treatment in Ashwini Sahakari Rugnalaya, a tertiary care hospital in Solapur city of Southern Maharashtra. The lactic acidosis case-fatality rate in resource limited settings can be as high as 60 percent. We also experienced the similar pattern as only two out of six patients survived. As the treatment options for lactic acidosis are limited we recommend that use of stavudine and other NRTIs to be restricted as far as possible and that the patients on long- term therapy with stavudine/ other NRTIs, who complain of nonspecific symptoms such as loss of appetite, fatigue, nausea, weight loss must be tested for venous lactate levels so as to detect symptomatic hyperlactatemia at an early stage which can be life saving for the patient. Further, stavudine and other NRTIs that can cause potentially life threatening lactic acidemia need to be phased out as costs allow.

Lactic acidosis (hyperlactatemia) is a potential adverse effect of the nucleoside reverse transcriptase inhibitors (NRTIs) in HIV/AIDS patients [1,2]. Several studies, when taken together, have shown detection of asymptomatic or mildly symptomatic lactic acidemia in 8-21 percent of patients receiving at least 1 NRTI [3]. Lactic acidemia with significant symptoms occurs with an estimated incidence of 1.5-2.5 percent among patients taking NRTIs [4]. Among the NRTIs, stavudine appears to cause lactic acidemia more frequently than didanosine or zidovudine. It is noteworthy that lactic acidemia directly attributable to NRTIs has been rarely reported in Indian studies. Here we report 6 HIV- positive patients who have been on ART comprising NRTIs and developed lactic acidosis. All were admitted for treatment in Ashwini Sahakari Rugnalaya, a tertiary care hospital in Solapur city of Southern Maharashtra in last one year.

Six confirmed HIV-positive patients were on antiretroviral therapy (ART), for which they were attached either to the Govt. ART centre or to the private clinics. Average duration of ART was 32 months (range 6- 65 months), four patients were on stavudine-based regimen and one each was on regimens comprising zidovidine and didanosine (Table 1). In the patients receiving stavudine, the dose of the drug was 30 mg irrespective of weight. Mean age of the patients was 40 years (range 34 - 46), three patients were male and three were female. Majority of these patients were admitted with symptoms of generalized weakness, fatigue and decreased appetite. Breathlessness on exertion was present in five out of six patients. Two patients also had nausea, vomiting, and abdominal pain. Initially these patients were admitted in emergency department of the hospital and later shifted to the intensive care unit (ICU).

Table 1: ART regimens of the patients

We collected all demographic details, anti-retroviral drug history from the patients. All routine investigations including special tests according to symptoms were done. Arterial blood gas analysis was done and venous lactate was measured after all necessary precautions by enzymemediated oxidation reaction method. Lactic acidosis is defined as serum lactate levels above the upper limit of normal (5 mmol/L) along with evidence of acidosis (bicarbonate level <20 mmol/L or pH <7.35) with other causes such as sepsis, renal failure, diabetic ketoacidosis and dehydration ruled out. In our cases, clinical diagnosis of drug- induced lactic acidosis was made on the basis of clinical symptoms suggestive of hyperlactatemia and investigations such as uncuffed venous lactate levels, serum bicarbonate levels and blood pH confirmed the clinical diagnosis. There was no evidence of metabolic acidosis. The information pertaining to patients’ venous lactate levels, respective blood pH and serum bicarbonate levels on admission is presented in Table 2. 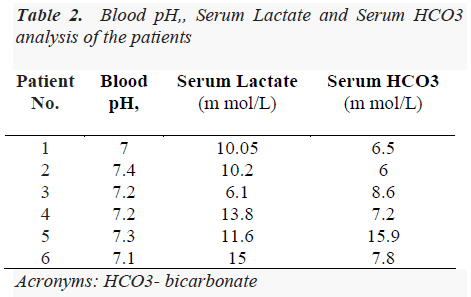 ART was discontinued in all the patients. Despite all supportive measures, only 2 patients could survive, 3 died, while one patient took discharge against medical advice.

The proposed mechanism for the development of antiretroviral therapy- related hyperlactatemia in HIV/AIDS patients centers around medication-induced inhibition of mitochondrial DNA polymerase-γ, leading to depletion of mtDNA and diminished capacity of the oxidative phosphorylation system [5]. Investigators have identified multiple risk factors associated with the development of lactic acidemia: use of either stavudine, didanosine, or zidovudine, use of stavudine plus didanosine, treatment duration with NRTIs for longer than 6 months, female gender, pregnancy, decreased creatinine clearance (less than 70 mL/min), evidence of lipoatrophy, obesity and high baseline body mass index (BMI) [6,7].

The onset of lactic acidemia typically begins months, or even years after starting an anti-retroviral regimen that includes one or more NRTIs. Two of our patients on stavudine- based regimen noted the onset of symptoms 6 months after starting anti- retroviral therapy, while the average for all the patients was 32 months. The most common symptoms include nausea, vomiting, abdominal pain, weight loss, fatigue, myalgias and features of hepatic dysfunction, including tender hepatomegaly, peripheral edema, ascites, and encephalopathy. Later symptoms may include dyspnoea and cardiac arrhythmias. Patients may also have signs or symptoms of other mitochondrial toxicities, such as peripheral neuropathy and lipoatrophy. In all of our patients; weight loss, fatigue and loss of appetite were the common presenting symptoms and advanced symptoms of lactic acidosis such as breathlessness were seen in five patients. Interestingly none of our patients had signs of lipodystrophy or peripheral neuropathy. There was no gender difference and stavudine, the most commonly used drug among all NRTIs was part of ART in 4 out of six patients. Didanosine and zidovudine were other NRTIs prescribed to one patient each. Incidence of lactic acidosis with zidovudine is very rare and usually reported with high dose monotherapy. The lactic acidosis case-fatality rate in resource limited settings can be as high as 60 percent [8]. We also experienced the similar pattern as only two out of six patients survived.

Despite being highly effective and its lower cost, use of stavudine-based regimens has been eliminated from developed countries owing to the poor side effects profile and such regimens are no longer recommended by the World Health Organization for initial treatment of HIV-1 infection [9]. However, it continues to remain an important component of standard ART regimens in many resource- limited countries, owing to low cost [10,11]. Recent estimates suggest that 60 percent of individuals receiving anti-retroviral therapy have stavudine as part of their first-line regimens in low and middle income countries [12].

We recommend that use of stavudine be avoided as far as possible. Patients on long-term therapy with stavudine who complain of nonspecific symptoms such as loss of appetite, fatigue, nausea, weight loss must tested for levels of venous lactate so as to detect symptomatic hyperlactatemia at an early stage so that potentially fatal complication such as lactic acidosis could be prevented by prompt withdrawl of the drug and timely management.

Stavudine/other NRTIs- based treatment regimens for HIV/AIDS patients in low-income countries are associated with significant long-term toxicities including life threatening lactic acidosis. Close clinical monitoring for life threatening toxicity with timely stavudine substitution is recommended. There is a need for phasing out of stavudine , as cost allows.

We express our gratitude to the directors and staff of the Ashwini Sahakari Rugnalaya Solapur for their support. We also thank the Pathology Department for providing all necessary investigations including serum lactate. We also express our special thanks to all the physicians who rendered valuable help while treating these patients.