Neuronal tracer enzyme of wheat germ agglutinin conjugated horseradish peroxidase (WGA-HRP) was employed to elucidate the detailed morphology of anterograde synaptic transport. After injection of WGA-HRP into the vagus nerve, sensory terminals in the nucleus of solitary tract (NST) were observed at the electron microscopic level using the tetramethyl benzidine and diaminobenzidine methods. In neuropil of the NST, electron-dense HRP-reaction product (HRP-RP) showed various types of lysosomallike structures. The RP characterized by containing membranous substance crossed synapses forming a mass without membrane surrounding the RP. Additionally, phenomena of anterograde synaptic transport of the RP and exocytosis of synaptic vesicles never occurred simultaneously. These findings raised the possibility of inducing synaptic transport of WGA-HRP at the stage of no neurotransmitter release, i.e. no activation of neuron. Therefore, further experiments were performed after co-injection of Rab3A-siRNA with WGA-HRP into the vagus nerve. This co-injection frequently resulted in not only suppression of vesicle trafficking to active zones and docking to pre-synaptic membranes but also abnormal aggregation of synaptic vesicles at terminals. Furthermore, synaptic transport of WGA-HRP, including secretion, followed by endocytosis of post-synaptic neurons was better seen in the experiments.

Recent genetic analysis of neuronal protein function has demonstrated that Rabs, GTP-binding proteins, are generally involved in regulating membrane traffic and function in neurotransmitter release. Particularly, Rab3A is associated with presynaptic vesicles regulating vesicle targeting to active zones [8-10]. Therefore, Rab3A related proteins are considered useful for investigating the influence on synaptic transport of WGA-HRP. In this study, Rab3A-siRNA inhibiting neurotransmitter release was injected into the vagus nerve with WGA-HRP. This co-injection makes it possible to demonstrate the direct influence of Rab3A-siRNA in vivo.

The present experiments were performed on 24 male Wistar rats (SLC, Hamamatsu, Japan), weighing 180-236 g. Animals were housed in separate cages and maintained under standard laboratory conditions (23 plus/minus 1 °C, 12-h light: 12-h dark cycle, food and water ad libitum). Experimental procedures were conducted in accordance with National Institute of Health (NIH) for Care and Use of Laboratory Animals. The Kagawa University Animal Care and Use Committee approved the procedures, and all efforts were made to minimize the number of animals used and their suffering.

Animals were anesthetized with intra-peritoneal injection of chloral hydrate (490 mg/kg) for all surgical procedures. 0.4- 2.0 μl of a solution of 4% WGA-HRP (Vector Laboratries, Inc) on 14 rats or working solution of 1 nM Rab3A-siRNA containing four per cent WGA-HRP on eight rats were injected into the vagus nerve on the right side or both sides using a 10-μl Hamilton microsyringe under the operation microscope. Rab3A-siRNA stock solutions (3.0nM) were diluted by double distilled RNAase free water and stored in aliquots at minus 80 °C. Working solution (1.0nM siRNA/5μl) was mixed with each aliquots (1:4 v/v) and four per cent WGA-HRP. Rab3A selective siRNA mixture (3 target-specific siRNA for Rho/Rab subfamily, santa cruz, sc-36343) did not show any sign of behavioral toxicity. After a survival period of 24, 48, 72 h in the case of injection of WGA-HRP or 12, 24, 48 h in the case of co-injection, the animals were sacrificed by perfusion through the ascending aorta with 0.1M phosphate buffer (pH 7.4) followed by a fixative of one per cent paraformaldehyde and 1.25-2.5% glutaraldehyde in 0.1M phosphate buffer.

The brain stem was removed from the skull and cut transversely into 200 μm-thick sections using a vibratome (Leica VT 1000S, Germany). The blocks containing the nucleus of solitary tract (NST) and dorsal motor nucleus of vagus nerve (DMV) were processed for demonstration of HRP-RP according to the TMB method [11] or heavy metal-intensified DAB method [12].

In the case of injection of WGA-HRP into the vagus nerve, NST was confirmed easily by HRP-labeled fibers in the nucleus and labeled neurons in the DMV at 200 μm- and one μm-thick sections. Anterograde labeling was more dense in NST, with ipsilateral predominance, on the case of a survival period of 48 hours. HRP-RP was identified more clearly as electron-dense materials when lead citrate staining was omitted. Experiments using TMB method resulted in the RP showing lysosomal- or club-like structures without any membranes surrounding the RP in the axons and terminals.

The terminals were characterized by containing one or more products (Figures 1A-D) and clusters of the RP around synaptic contacts (Figure 1E). The RP was frequently observed from pre- to post-synaptic sites in continuity in the terminals participating in axosomatic (Figure 1B) and axodendritic synapses (Figures 1C-E). There were no remarkable changes of synaptic vesicles and membranes when the RP crossed the synapses. Furthermore, phenomena of exocytosis of synaptic vesicles and anterograde synaptic transport of the RP never occurred simultaneously (Figure 1A). 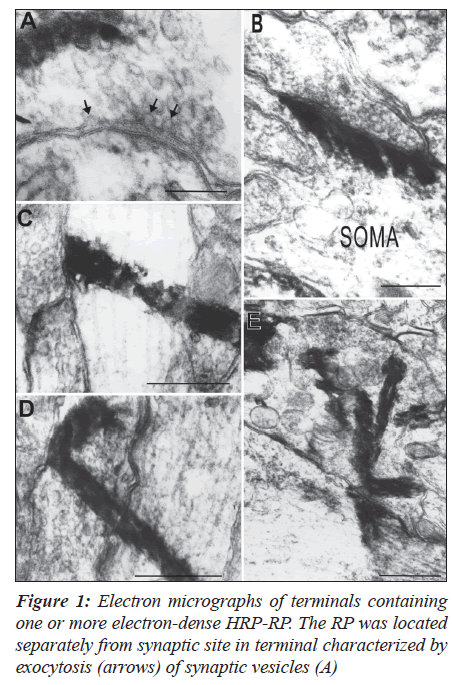 Figure 1: Electron micrographs of terminals containing one or more electron-dense HRP-RP. The RP was located separately from synaptic site in terminal characterized by exocytosis (arrows) of synaptic vesicles (A)

Experiments using DAB method represented a different configuration of RP which might result from the use of a different pH or chromogen. This method apparently provided a more detailed morphology for anterograde transport of WGA-HRP at synapses. The RP showed membrane-bound lysosomes or lysosomal-like structures in axons (Figure 2A) and terminals (Figures 2B, C). Interestingly, the RP frequently contained membranous substance and formed a large mass consisting of two to five of the RP without vacuoles at terminals. Contacts between RP and the presynaptic membranes suppressed the membrane surrounding the RP. 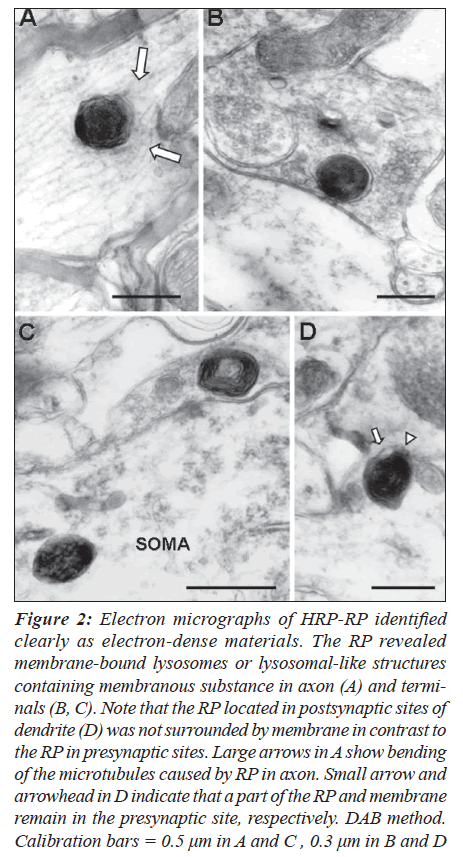 Figure 2: Electron micrographs of HRP-RP identified clearly as electron-dense materials. The RP revealed membrane-bound lysosomes or lysosomal-like structures containing membranous substance in axon (A) and terminals (B, C). Note that the RP located in postsynaptic sites of dendrite (D) was not surrounded by membrane in contrast to the RP in presynaptic sites. Large arrows in A show bending of the microtubules caused by RP in axon. Small arrow and arrowhead in D indicate that a part of the RP and membrane remain in the presynaptic site, respectively. DAB method. Calibration bars = 0.5 μm in A and C , 0.3 μm in B and D

Furthermore, it was likely that indentation structure at synapses is formed to pass through the synapses (Figure 3A). Round or irregular shaped RP was observed to form synaptic transport (Figures 3B-D). Exocytosis of synaptic vesicles never occurred when the RP made contacts with However, the RP was frequently observed from pre- to postsynaptic sites in continuity in the terminals participating in axosomatic (B) and axodendritic synapses (C-E) without any changes of synaptic membranes and vesicles. TMB method: Calibration bar is equal to 0.2 μm in A and B, 0.5 μm in C and D, one μm in E. 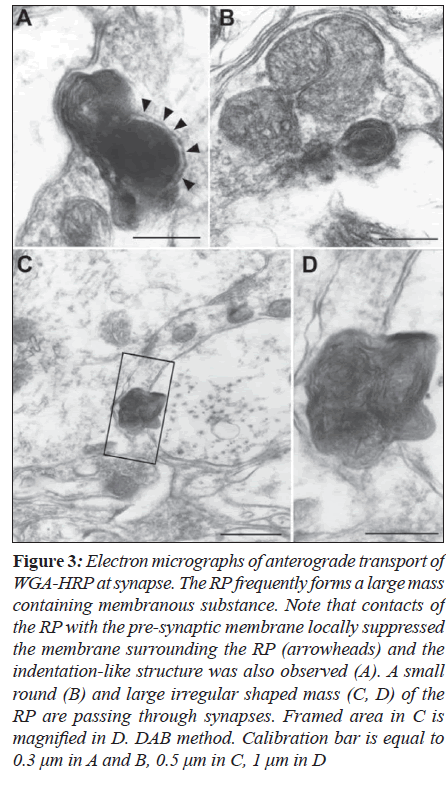 Figure 3: Electron micrographs of anterograde transport of WGA-HRP at synapse. The RP frequently forms a large mass containing membranous substance. Note that contacts of the RP with the pre-synaptic membrane locally suppressed the membrane surrounding the RP (arrowheads) and the indentation-like structure was also observed (A). A small round (B) and large irregular shaped mass (C, D) of the RP are passing through synapses. Framed area in C is magnified in D. DAB method. Calibration bar is equal to 0.3 μm in A and B, 0.5 μm in C, 1 μm in D

Presynaptic membranes or crossed synapses (Figures 3A and B). The RP transported to postsynaptic neurons was not surrounded by membrane (Figure 2D). 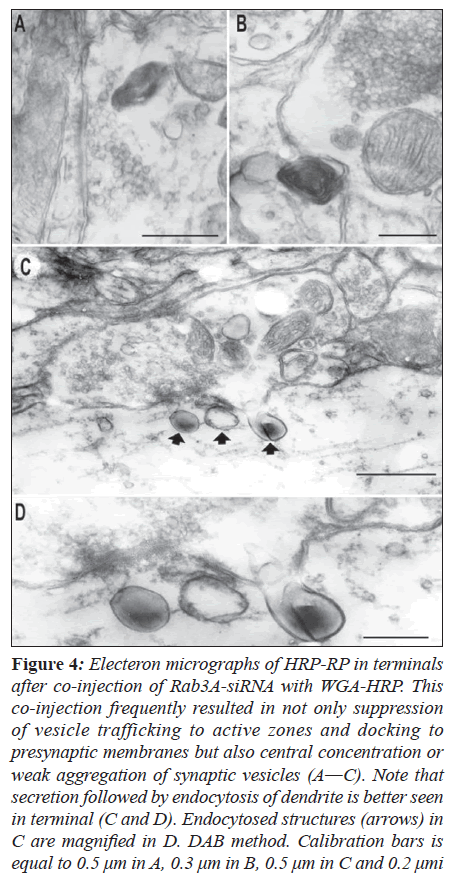 Figure 4: Electeron micrographs of HRP-RP in terminals after co-injection of Rab3A-siRNA with WGA-HRP. This co-injection frequently resulted in not only suppression of vesicle trafficking to active zones and docking to presynaptic membranes but also central concentration or weak aggregation of synaptic vesicles (A―C). Note that secretion followed by endocytosis of dendrite is better seen in terminal (C and D). Endocytosed structures (arrows) in C are magnified in D. DAB method. Calibration bars is equal to 0.5 μm in A, 0.3 μm in B, 0.5 μm in C and 0.2 μmi

This co-injection also resulted in secretion of terminals followed by adsorptive endocytosis of postsynaptic dendrites.

The RP in secretion was characterized by electron-dense homogeneous substance in contrast to that containing membranous substance (Figures 4C and D). In control rats, sections reacted with TMB and DAB showed no similar structure of RP at terminals in the neuropil of the NST to that described above.

WGA-HRP has been employed for ultra-structural investigation of anterograde synaptic transport. Particularly, further observation in the present study was made to demonstrate the direct influence of Rab3A-siRNA at terminals in vivo. Experiments using TMB method resulted in elongated RP passing through synapses which was also identified in our previous study in the central nervous system [13]. Although the RP located from pre- to post-synaptic sites in continuity,might be induced by leakage of WGA-HRP, there is no possibility of leakage because of any normal synaptic membrane structure and membrane bound RP demonstrated using DAB method. However, the possibility cannot be excluded that the elongated structure is TMB crystal growth across membranes.

The membranous substance in the RP seems to be formed by endocytosis of lysosome for WGA-HRP which has an association with Golgi apparatus[14] and similar to autophagic-like structure which shows degeneration of cytoplasmic components [15,16]. Although this structure , often containing vacuoles, has been reported in the previous study using WGA-HRP method, there is no description about synaptic transport [17]. In the present study it is not concluded that the membranous substance is completely in accordance with autophagy. However, the membranous substance possibly including lipids might play some important role in passing through synapses.

With respect to lectin, immunoblot analysis demonstrated that the 62-kDa lectin (WGA)-HRP conjugate (WGA: 22- kDa, HRP: 40-kDa) binds to specific carbohydrate moieties attached to glycoproteins and glycolipids expressed on surface plasma membranes [18]. WGA has been used as an effective tracer in neuronal systems among a number of lectins because of common expression of WGA receptors on surface plasma membranes of most neurons [19]. These findings suggest that synaptic transport of WGA-HRP is highly dependent upon lectin activity. Recent studies also have indicated a relationship between lectin activity and proteins of the annexin family. In particular, annexin IV binding to glycosaminoglycants in the presence of calcium ions is identified to be a lectin [20]. Annexin V also has same lectin activity and is suggested to play certain roles in the central nervous system as a neurotrophic factor [21].

The relationship between synaptic transport of RP and vesicular transport raised the possibility that synaptic transport of WGA-HRP is induced at the stage of no neurotransmitter release, i.e. no activation of neuron. In this point, Rab3A-siRNA injection into the vagus nerve is useful for investigating the phenomena. The present experiments revealed not only a loss of docked synaptic vesicles adjacent to the postsynaptic density but also abnormal aggregation of synaptic vesicles. These findings are well consistent with those reported in previous Rab3A knock-out mice [10,17,22,23]. Furthermore, in the present study, synaptic transport of WGA-HRP including secretion followed by endocytosis of dendrites was better seen after administration of Rab3A-siRNA. In secretion, the RP showed homogeneous structure which seemed to have no association with lysosome in contrast to membranous substance. Although more detailed molecular analysis for the relationship between the synaptic membranes and protein endocytosed by lysosome should be studied in further experiments, co-injection of Rab3A-siRNA with WGA-HRP apparently makes it possible to demonstrate the direct influence of Rab3A-siRNA in HRP-labeled terminals in vivo. Indeed more studies are required to establish more details about the structures. In the previous study investigating synaptic transport of WGA-HRP in the olfactory bulb after intranasal administration, Broadwell and Balin[7] suggested that the RP is exocytosed from axon terminals for adsorptive endocytosis and possibly fluidphase endocytosis by postsynaptic neurons. The present findings of secretion are considered to be in agreement with their proposal.

The authors greatly appreciate a critical review of an earlier version of this manuscript by Dr. Thierry D. Jacquin and Prof. Norihiko Maeda, and acknowledge the skillful technical assistance of Mr. Wakashi Nagata and Mrs. Mizue Fukutomi. This investigation was partly supported by the grant for science research from the Japanese Ministry of Education (No. 18591292).