This report is a rare case of a lumbar interbody fusion cage dislocation in the procedure of Minimal Invasive Transforaminal Lumbar Interbody Fusion surgery (MI-TLIF) for spondylolisthesis of segment L5/S1. A 65-year-old lady underwent MI-TLIF surgery, and the interbody fusion cage was dislocated forward into retroperitoneal space. The cage was extraction with lateral approach and replaced by larger size of internal fixation devices. The patient felt pain, numbness, and unable to lift limbs after surgery, these symptoms were gradually relieved 3 months later. Spondylolisthesis of L5/S1 segment, incomplete reduction, bilateral implantation of bullet-shaped cages was all risk factors for dislocation of fusion cage. The cage which falls into retroperitoneal cavity and extraction by lateral approach could cause injury to lumbosacral trunk. Deciding extraction or not in a second stage after examination and evaluation may be a good idea.

Minimally Invasive Transforaminal Lumbar Interbody Fusion (MI-TLIF) is a popular surgical procedure for treatment of degenerative lumbar diseases, which has the advantages of minimal invasive, less traction on paraspinal muscles and dura, and little influence on spinal stabilization [1]. The surgery can relax dura and nerve root, and is suitable for lumbar disc herniation, stenosis, spondylolisthesis and other lumbar degenerative diseases. With the application of lumbar interbody fusion cage, which restores intervertebral height, lumbar lordosis and promotes bone healing rates, meanwhile the complications especially cage dislocation were gradually increased. Kimura reported that the rate of cage retropulsion after posterior lumbar interbody fusion is about 3% [2]. We present a case of cage dislocated anterior into retroperitoneal cavity, and measures were taken to remove it. In the literature there were rarely similar cases, but surgical treatment to remove it immediately had not been reported.

A 65 y old lady was admitted to hospital by the clinic. She complained of low back pain for 2 y and lower extremities pain for 3 months, especially severe on the left foot. Accompanied by claudication, and crutches were needed when walking for long distance. No bladder or rectum symptoms were presented. There was no obvious effect after underwent acupuncture, physiotherapy and rehabilitation for 1 month. The examination showed that lumbar muscles were spastic and tense, pain existed during tapping, and there was paresthesia on both dorsal feet. Motor power in the lower extremities was graded as 5/5 bilaterally according to the MRC (Medical Research Council) scale. Straight leg raise testing for the right was positive, femoral nerve traction test was negative on sides, bilateral patellar and Achilles tendon reflexes were normal. Her past medical history included coronary heart disease but not severe, half a year ago after a period of intermittent oral aspirin, she did not insist on taking. She didn’t smoke or drink, and no other bad habits. The Bone Mineral Density (BMD) of hip joint by dual energy X Ray Absorptiometry (DXA) was -1.6 which showed osteopenia. Plain radiographs (Figure 1A) and CT images (Figure 1D) showed L5-S1 grade I degenerative spondylolisthesis with instability and mild lumbar scoliosis, sagittal CT could clearly showed spondylolysis of pedicle. Magnetic resonance images (Figures 1B and 1C) showed lumbar canal stenosis and L5-S1 disc degeneration, dural sac and nerve roots were compressed bilaterally. Coronary artery CT image showed coronary stenosis for 20%, there was no obvious contraindication to the operation. The indication of MI-TILF surgery was degenerative lumbar disease, mainly for mild to moderate disease, and was rarely used for spondylolisthesis. We attempted to treat spondylolysis with MI-TLIF, pedicle screws were used to reposition slipping vertebrae and fusion cage restored intervertebral height. Surgery was made after preparation. Assisted by microscope and channel, transforaminal decompression was made through lumbar paravertebral approach (Figure 2A). After bilateral pedicle screw fixation and reduction of intervertebral space, bullet-shaped PEEK cages were implanted. The cage on left side felled into retroperitoneal cavity when hammering (Figures 2B), intraoperative electrophysiological monitoring showed no abnormalities during this procedure. After patients was positioned lateral decubitus, an oblique incision was made between iliac and abdomen. But this time, we didn’t use electrophysiological monitoring. In the process of blunt dissection from iliac surface to sacrum, nerve roots, lumbar plexus and vasculars were carefully protected. The cage was found between impaired anterior longitudinal ligament and retroperitoneum. Auto bone granules and large-sized cage were implanted into L5/S1 intervertebral space (Figure 3A and 3B). Then took prone position again and compressed pedicle screws. 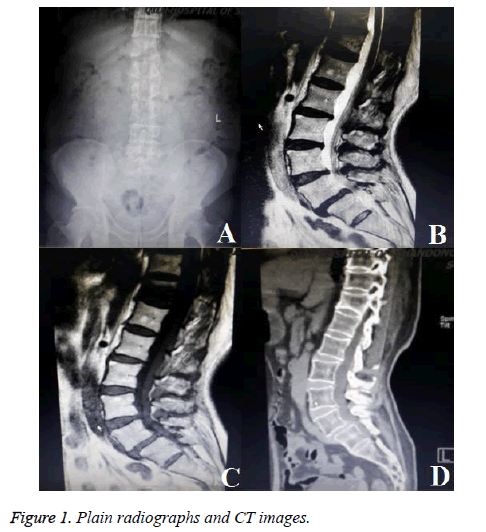 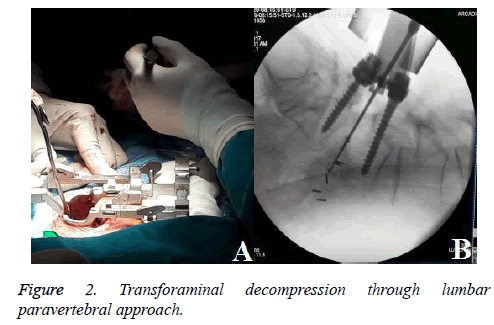 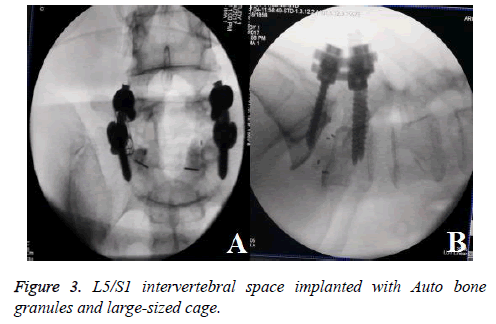 After surgery the patient felt discomfort on left thigh, which couldn’t be lifted up, muscle strength of hip joint decreased to M3. There were hypoesthetic areas on left thigh. The right lower limb didn’t have neurologic impairment. The X-ray showed the position of cage and screws were good. Electromyography revealed left femoral nerve injury. The patient was confined to bed for one month after surgery. Fortunately, she was able to walk without assistant finally, strength of left leg returned to normal, hypoesthetic areas disappeared, and this was the thing three months later.

MI-TLIF is a minimally invasive surgery for degenerative lumbar disease, which retains the posterior ligament complex, reduces surgical trauma and shortens operation time. But if details such as operative techniques, indications, cage selection and preoperative imaging analysis did not been noticed, complication of cage dislocation may occurred. Although the incidence is low, it could lead to nerve impairment that seriously affecting the clinical outcome. The incidence of cage migration with MI-TLIF was presented to be a range of 0.3-6%, reported by Bakhsheshian [3].

The reports of cage migration anterior were rare, most were posterior migration [4]. There was another condition, cage falling into the vertebral body because of osteoporosis, which was reported by Corniola [5]. According to the literature, cage migration was associated with degenerative scoliosis, bulletshaped cages, osteoporosis, shape of endplate, height of disc, undersized cage; loosen of screws [6]. These are risk factors for ordinary cases of lumbar interbody fusion.

We need to consider some special factors involved in this case. The MI-TLIF operation is performed laterally between musculi multifidus and longissimus, without interfering with central structures. On the other hand, it is 1-2 cm away from the midline, the cages were inserted into vertebral space eccentrically, so that intervertebral compressive stress can’t maintain the position of cages.

We prefer two cages implantation to maintain spinal balance and increase fusion rate. When combined with lumbar scoliosis, the height of intervertebral space between spinous processes is unequal, bilaterally simultaneous compression may not be achieved satisfactorily, rate of fusion loosening may increase [7].

L5/S1 spondylolisthesis is another problem. This segment has anatomical specificity. Vertebral body of L5 is usually trapezoid, upper end plate of S1 is inclined, the inclination of the pelvis is an adverse factor. The area of intervertebral fusion is small, if reduction is not good enough, cage could easily break through anterior longitudinal ligament when inserted into intervertebral space.

It is controversial whether the cage will be removed when it is displaced anterior. Ceylan considered that early retroperitoneal explorative surgery is not required unless intra-abdominal organ and vascular injury develop [8]. Hyeong concluded additional surgery via an anterior approach may be effectively performed for removal of the displaced cage and re-insertion [9]. After deliberation, we decided to remove the displaced cage during the operation. Unfortunately, nerve function of left lower extremity decreased significantly after operation, after 3 months of rehabilitation, it gradually returned to normal.

Motor nerve was injured serious, sensory nerve was not obvious, it was considered to be anterior ramus of femoral nerve. Cage might cause pelvic nerve plexus damage after stepping into the retroperitoneum, but could not explain the obvious problem of motor nerve injury. According to clinical manifestation and electromyography, it was likely that femoral nerve was injured by distraction or separation during the lateral exposure, but not irreversible damage, and ultimately the patient's neurological function restored.

It is questionable whether cage must be removed immediately after transposition [10]. Structures of retroperitoneal are complex and full of blood vessels and nerves, which has been widely studied [11]. It is possible to cause damage of important structures, especially in the condition of variation and deformity. Observation of patient's clinical symptoms and assessment of imaging may be a better choice before deciding whether to remove the displaced cage.

Patients with spondylolisthesis of L5/S1 segment treated with MI-TLIF, the cage should be carefully chosen. Bilateral implantation of the bullet-shaped cages may cause dislocation. The lateral approach may remove fusion cage from retroperitoneal space, but there is a risk of injury to anterior ramus of spinal nerve.