Methods: It was performed by retrospectively analyzing 42 eyes of 42 patients with acute PACG. The patients were divided into two groups by the time length from symptom onset to hospital visit: 21 eyes of 21 patients in Group A were treated within 24 h, whereas 21 eyes of 21 patients in Group B were treated after 24 h. The acute PACG eye of each patient firstly received local as well as systemic medications to lower intraocular pressure (IOP), and subsequently combined ACP and LPI treatment, resulting from IOP levels of 35 mmHg or more for 2 h after medication.

Results: The IOPs of acute PACG eyes in Group A were significantly lower than those in Group B, and IOPs decreased substantially after the treatment in both Groups A and B. These differences were statistically significant (both P<0.05). Eighteen patients in Group A (85.7%) presented with anterior chamber angle above 180° after treatment, significantly higher compared with 7 (33.3%) in Group B (P<0.05). Three eyes (14.3%) treated with glaucoma surgery (trabeculectomy or glaucoma cataract combined with intraocular implementation) in Group A, and 14 (66.7%) in Group B.

Angle closure refers to a diverse group of anatomical disruptions of the anterior segment, which probably lead to mechanical blockage of the trabecular meshwork by the peripheral iris, thereby resulting in increased IOP with subsequent optic disc and visual field changes which were used to diagnose as angle-closure glaucoma.

Acute primary angle-closure glaucoma (PACG) is an ocular emergency, and once being diagnosed, drugs to decrease intraocular pressure (IOP) are firstly administrated. In PACG patients, excessively high IOP leads to ischemic injury to the affected eyes. The patchy anterior sub-capsular opacity represents infarction of the sub-capsular lens fibers. Besides high IOPs, steep corneal curvature, swallow anterior chamber and short axial length are relevant ocular factors. After IOPs were stabilized, laser or surgical therapies are further considered according to causes and ocular conditions. However, patients of high IOPs who are drug uncontrollable are commonly observed.

In this study, 42 eyes of 42 patients diagnosed with acute PACG were recruited in this investigation. All participants suffered from uncontrollable high IOPs after 2-hour drug treatment. Subsequent combined therapies of ACP and LPI were performed. Postoperative IOPs and the best-correct visual acuity were statistically assessed between different groups before and after corresponding therapy.

A retrospective analysis has been conducted on 42 patients from Chao Yang Hospital Affiliated to Capital Medical University from January 2011 until October 2016. In total, 42 eyes of 42 patients, consisting of 19 males and 23 females, and aged from 48 to 80 years old, with an average of 63.5 years old, were recruited in this study. Written informed consent was obtained from each patient and his/her relatives before all the treatment and procedures. Patients were divided into two groups by the time length from symptom onset to hospital visit: Group A of 21 eyes of 21 patients, whose symptom onset were within 24 h; and Group B of 21 eyes of 21 patients, who had the onset of PACG for over 24 h. Demographic data were matched between two groups.

a) be in conformity with the clinical symptoms of acute onset of PACG; b) the first onset of acute PACG; c) symptom onset within 48 h (8 h-2 d); d) no contra-indicators for the treatments and procedures adopted in this study.

All the patients had received local as well as systemic medications to reduce IOP, including 2% pilocarpine for pupil constriction, Betagan and Brinzolamide eye drops, oral administration of Methazolamide tablets, as well as Isosorbitol oral solution or intravenous rapid infusion of mannitol. The patients showed no sign of remission 2 h after these treatments. Symptoms were observed including mixed congestion, epithelium anteriu corneae edema to different extents, extreme low limbal anterior chamber depth, pupil dilation, slow or no react to light, and IOP levels of 35 mmHg or more. ACP and LPI treatments were conducted under topical anesthesia, with follow-up observation of IOP, vision and limbal anterior chamber depth changes. After the IOP levels were stabilized, additional treatments were adopted including local medications to lower IOP, trabeculectomy, and glaucoma cataract combined with intraocular implementation or phacoemulsification combined with intraocular lens implantation.

A sterile 25-gauge needle (Becton Dickinson Medical Pte.Ltd) was inserted into the anterior chamber from 1.5mm interior to corneal limbus in the intranasal or infratemporal quadrant, to avoid injuring iris and lens. Give slight pressure onto posterior margin of the puncture during needle withdrawal to relive aqueous humor from the anterior chamber till the cornea was transparent. Take IOP level to determine if it was under 25 mmHg. If not, repeat the above procedures to drain aqueous humor. After ACP, levofloxacin eye drops was administered immediately.

For LPI, patients were given 2% pilocarpine nitrate eye drops twice in every 10 minutes, to contract pupil and flatten iris. Oxybuprocaine hydrochloride eye drops were used as topical anesthetic. Penetration site should be peripheral area in supertemporal or supernasal quadrant, and the best target was a crypt of iris. The Nd: YAG laser was used at an initial setting of 6 mJ, and then increased up to 13 mJ until the iris was fully performed, and an iridotomy of more than 0.3 mm2 was completed. The key was to achieve perforation by using the minimal level of energy. Full-thickness perforation was confirmed when aqueous came forward from the posterior chamber to the anterior chamber with dispersion of pigment. For post laser regimen, tobramycin and dexamethasone eye ointment (Tobradex®) was applied 4 times a day. Local and systemic medications were required to lower IOP, and IOP level and anterior chamber changes were under close monitoring. After IOP was stabilized, according to vision acuity, angle closure and degree of lens opacity, perform local treatment of IOP-lowering medication, trabeculectomy, and glaucoma cataract combined with intraocular implementation, or phacoemulsification combined with intraocular lens implantation, respectively.

No significant difference was observed in IOP before treatment between Group A and B (P>0.05). At 1 d after being treated with combined ACP and LPI, IOPs in Group A was statistically lower than those in Group B (P<0.05). The IOPs were significantly reduced after treatment compared with those before treatment in both Groups A and B (both P<0.05) (Table 1).

Table 1. The IOP of the patients before and 1st - day after treatment (mmHg)

Table 2. The best-corrected vision acuity before and 1st - day after treatment (Number of eyes).

Compared with those before treatment, the acute PACG eyes revealed relief or regression of corneal edema and increase in anterior chamber depth after treatment, as illustrated in Figure 1. 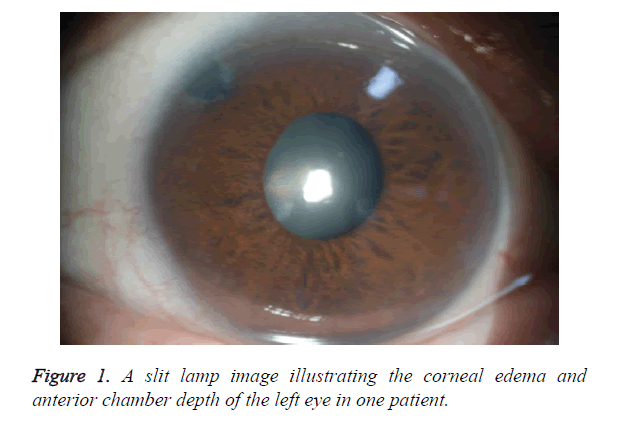 Figure 1. A slit lamp image illustrating the corneal edema and anterior chamber depth of the left eye in one patient.

No acute PACG eyes in Group A or Group B were observed with complications, including hyphema, intraocular infection, injuries to crystalline lens or cornea.

Acute PACG is a common ocular emergency among Asian populations [1]. It is imperative to conduct effective therapies to rapidly decrease IOP and open anterior chamber angle in order to avoid permanent goniosynechia and rescue visual acuity. It has been demonstrated from previous studies that IOP levels maintaining at 50 mmHg or more for 72 h could lead to irreversible damages to the optic nerve [2]. IOPs of acute PACG eyes remain high after local and systemic medication therapies. Effective interventions include rapidly lowering IOP, opening anterior chamber angle and maintaining visual acuity. In this study, 33.3% of acute PACG eyes in Group B had anterior chamber angle above 180° after 24 h treatment, and 66.7% of the eyes were performed glaucoma surgery. In Group A, only 14.3% received glaucoma surgery after treated within 24 h. Therefore, we demonstrated that the possibility of goniosynechia or even angle closure would increase extensively as the lasting status of high IOP, which also brings difficulty to subsequent treatment.

ACP can promptly lower IOP and prevent secondary injury of optic nerve and trabecular meshwork. Lam et al. [3] found that ACP could immediately relieve the symptoms of acute PACG eyes. The IOPs were reduced from 66.69 ± 9.1 mmHg to 15.1 ± 3.5 mmHg without postoperative complications. ACP is technically easy to conduct, effective and exclusive of severe complications. Therefore, it is a temporarily safe and effective treatment for patients with medically uncontrollable high IOP. ACP contributes to the elimination of corneal edema and the reduction of IOP. Pilocarpine is capable of narrowing the pupil and increasing iris tension, applicable to Asian patients with iridoncosis to receive subsequent LPI therapy. Previous studies demonstrated that ACP probably yields intraocular infection and hemorrhage, crystalline damage and malignant glaucoma [4,5]. We did not find above-mentioned complications in this study. It is fundamental to apply antibiotic eye drops before therapy. Following successful anterior chamber puncture, a slight pressure should be applied onto the posterior margin of the puncture to prevent choroid hemorrhage due to rapid IOP reduction.

Evidences from Sihota et al. [6] showed that ACP led to instant IOP decrease. Instead of fundamentally eliminating pupillary block, ACP could merely temporarily control IOP and relieve symptoms with a potential risk of recurrence. LPI should be performed immediately to eliminate pressure difference between anterior and posterior chambers and stabilize IOP [7,8]. LPI also relieve damage to intraocular structures, eliminate adhesive angle closure and avoid further peripheral anterior synechia, which prevent the occurrence of malignant glaucoma. In this study, combined ACP and LPI have proven to be effective with stable and controllable IOPs.

Patients suffered from the first attack of acute PACG and further received combined treatment of ACP and LPI. Both the anterior chamber angle and IOP stabilization were considerably improved in eyes receiving early treatment compared to those failed to. Consequently, early treatment was crucial for patients with acute attack of PACG by effectively stabilizing IOP and preventing further damage to ocular tissue and visual acuity. It avoided glaucoma filtering surgery. Glaucoma filtering surgery may cause intraoperative and postoperative complications including severe intraocular tissue injury [9]. In this study, that among the, a majority (18/21, 85.7%) of acute PACG eyes receiving early ACP combined with LPI had controlled IOP with 1-2 types of IOP-lowering eye drops or phacoemulsification combined with intraocular lens implantation [10,11].

To conclude, early and timely interventions are of significance to acute PACG patients. For those with uncontrollable IOP after local and systemic medications, ACP combined with LPI is highly recommended. As a consequence, a majority of patients can achieve stabilized IOP and satisfied visual acuity, while avoiding glaucoma filtering surgery