A 2750 g female infant presented with multiple striking 1-6 mm purpuric, non-blanching macules Blueberry-Muffin rashes. After symptomatic treatment, the whole body skin rash were scabby, liver and spleen were also moderately enlargement. The diagnosis was confirmed by skin biopsy. The parents were reluctant to use hormone therapy, and discharged against medical advises 21 days after admission.

Langerhan cell tissue hyperplasia (langerhans cell histiocytosis, LCH) caused by the hyperplasia of langerhans cell is rare and the incidence is 1-2/1000, 000 [1]. The clinical manifestations are diversification involving skin, bone, lymph nodes, liver, spleen, lung, gastrointestinal tract, oral cavity and even the central nervous system. The classification of histiocytic disorders has been revised into three different classes by the Writing Group of the Histiocyte Society: Langerhans cell histiocytosis (LCH) (Class I), histiocytosis belonging to the mononuclear phagocyte system, or non-LCH (Class II), and malignant clonal proliferations (Class III) [2]. LCH can damage various tissues by the accumulation of a clonal population of cells with a Langerhans (LH) cell phenotype [3].

Figure 1: Multiple purpuric papules and crusts with a maximum size of 6 mm (a) 1,2 on admission (b) before discharge.

The skin biopsy disclosed that some mononuclear cell infiltrated the epidermis and the dermis courseware, and immunohistochemical study suggested CD1 and S100 positive (Figure 3). Gene mutated BRAF was found no 15 extra child point mutations (v600E) by gene mutation analysis. The patient brought computed tomography (CT) image of chest and abdomen which showed the nodules distributed in the lung, the density of the whole body bone is uneven with multiple small low density shadow. The left humerus exhibited low density shadow on MRI of bone. 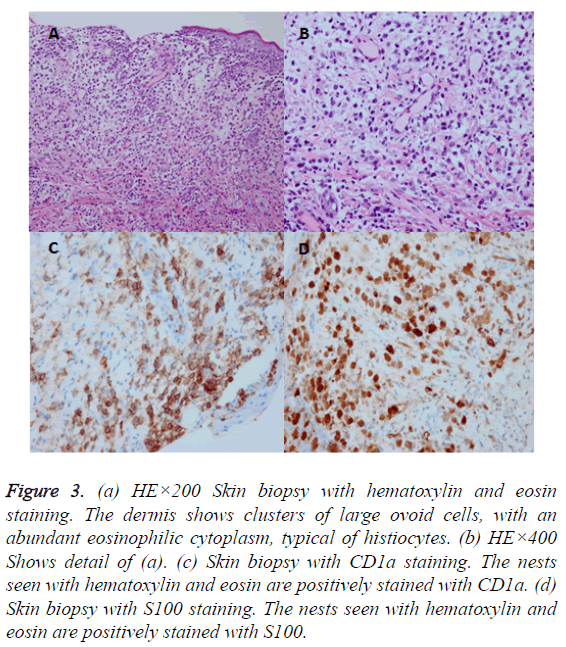 The bone density of bilateral humerus, proximal ulnar radial, bilateral tibial backbone, femur, pelvic were uneven as well as the top of the skull and the occipital bone (Figure 4). After symptomatic treatment, the whole body skin rash were scabby, liver and spleen were also moderately enlargement. The diagnosis was confirmed by skin biopsy. The parents were reluctant to use hormone therapy, and discharged against medical advises 21 days after admission. In the last telephone follow-up, the rash scabby was fade without new rash appearing, dyspnea, jaundice, bleeding and repeated infection. The child has been advised to be followed clinically with bone, liver and spleen surveys for at least two years. And pediatrician should be called if rash appears again. More attentions should be payed by parents to persistent swelling or bruising in the injured areas.

Figure 4: Bone MRI and Chest CT. (a) The density of the top of the skull and the occipital bone are uneven. (b) The bone density of bilateral humerus, proximal ulnar radial, bilateral tibial backbone, femur, pelvic are uneven. (c) The nodules distributed in the lung.

Newborn skin rash, benign or malignant, is a very common problem. This female newborn baby was born with rash which may occur through infection and non-infection. Infection causes include herpes simplex virus, chicken pox, cytomegalovirus, B group hemolytic Streptococcus, Staphylococcus aureus, Listeria monocytogenes, Pseudomonas and Candida albicans. On the other hand, non-infection causes cover toxicity erythema, epidermolysis bullosa, congenital leukemia and relatively rare LCH. The major cause is usually infection, so we screened all types of infectious etiologies and perfected powerful anti-infection treatment before excluded it. Because of the resistance Ro-52 antibody was positive (++) in our case, we must rule out the Neonatal Lupus Erythematosus. Although other laboratory testing and the cardiac image were normal, it was finally ruled out by skin biopsy.

From 1985 to 2002, 894 children under 15 years with LCH were registered at German Childhood Cancer Registry. Sixteen of these patients (1.8%), 7 male and 9 female, were diagnosed within the first 28 days of life (15 of those were enrolled into LCH clinical trials and are therefore part of the neonatal cohort described below). The incidence of LCH in infants diagnosed under 1 year is calculated 25 per million infants (calculation based on 339 cases diagnosed in Germany between 1998 and 2002) [4]. 16 neonatal cases account for less than 5% of these cases. The diagnosis of LCH in all patients was established by histopathological examination of biopsy specimens according to the criteria of the Histiocyte Society [5,6]. Histopathologic examination should be performed to confirm the diagnosis, and typically reveals clusters of large ovoid cells with an abundant eosinophilic cytoplasm and a grooved indented nucleus in the upper dermis, sometimes with the sign of epidermotropism. Tumor cells contain Birbeck granules visible on electron microscopy, which can now also be identified by immunocytochemical and enzyme histochemical techniques, using CD1a and S100 as identifying markers [7,8].

Hashimoto et al. described a congenital self-healing reticulohistiocytosis (Hashimoto-Pritzker disease) with cutaneous lesions, mostly in the neonate stage [9]. In contrast to the isolated cutaneous LCH, only a couple of case reports concerning spontaneous resolution of MS-LCH have been reported [10,11]. In the review report, complete resolution of MS-LCH without systemic therapy was observed in 3/36 (8%) patients (2 untreated and 1 treated with topical steroids), all without risk organs at diagnosis. It is widely accepted that MSLCH presented in the younger is associated with poor prognosis [12,13]. Patient’s age has been implemented as a prognostic factor for stratifying LCH [12]. It seems, however, a close association between young age and disseminated disease [14-21].

Many different treatment regimens have been attempted for MS-LCH. Vinblastine and etoposide, both with activity against diverse disorders of the monocyte-macrophage system, appear to be the most effective. The results of this trial showed that both drugs, given with an initial high dose of methylprednisolone, are equally effective, but patients who show no response within 6 weeks may require different therapy. Recurrent disease affects more than 50% of patients who achieve remission, and LCH thus remains to be an orphan disease that warrants better treatment options. Conceivably, modern biologicals, such as (humanized) antibodies directly against CD1a, may be an interesting option to pursue.

Overall, in evaluating these patients, it is important to consider a differential diagnosis of a newborn presenting with skin lesions or mimicking extramedullary hematopoiesis. The differential diagnosis may include intrauterine toxoplasmosis, other infections (syphilis, varicella-zoster, parvovirus B19, rubella, cytomegalovirus, and herpes), leukemia cutis, neuroblastoma, LCH, various forms of hemolytic anemia, infantile hemangiomatosis, and other vascular anomalies. Diagnosis of LCH can be made according to histopathologic examination of a skin biopsy specimen. Hematoxylin and eosin stain typically demonstrates a dermal proliferation of mononuclear cells with reniform nuclei often associated with epidermotropism. Positive staining of these cells with CD1a and S100 confirms the presence of Langerhans cells.

Our case emphasizes the importance of recognizing the cutaneous manifestations for LCH, as well as the prevalence of multiorgan disease in this population. In such cases, close monitoring for disease progression is mandatory. At diagnosis, neonates with MS-LCH have less favorable prognosis compared with patients who are not in the neonatal period. Adapted treatment is mandatory for all neonates with MSLCH. In our case, although the patient may show poor prognosis, she has not developed serious complications by now, and she will continue to be followed.

The present study was supported by funds from the Natural Science Foundation of China (grant nos. 81401239 and 81401233). And thanks to Dr. Qin Yao for guidance and help in the diagnosis, treatment and follow-up process of our case.

The authors have no conflicts of interest relevant to this article.