1College of Information Science and Technology, University of Nebraska at Omaha, NE, USA

Seafarers live in a special circumstance that is unstable and isolated during a sea voyage. It is important to understand seafarers’ unique lifestyle in the tough living conditions to maintain their physical health status [1,2]. Previous studies addressed that physical activity in an unstable living environment reinforced different characteristics of physical activities due to the ship’s motion in waves [3,4]. For example, walking on a ship at sea required significantly higher muscular efforts than the walking on a stable floor [5]. Unstable ship movement also triggered physical inactivity that was highly prevalent in seafarers [6-8]. It is important to have reliable physical activity assessments to gain a better understanding of seafarers’ physical activity patterns from their distinctive living and working environment.

Wearable inertial sensor-based approaches are frequently used physical activities in daily life [9]. Wearable sensor-based physical activity studies have been well investigated in various populations on land [10-12]. However, these studies may not be directly applicable for seafarers. This because wearable approaches for mariners needs to consider additional uncommon conditions such as dynamic ship’s motion and limited accommodation area. Due to the seafarer’s prevalent sedentary behavior, accurate classification between sitting and standing is more important than other daily activities. The two sedentary activities (i.e. sitting and standing) can be easily misclassified because upper trunk motion characteristics of both activities are fundamentally similar to each other. In this study, we assume that the Sit-To-Stand transition (STS) is a useful indicator for recognizing the transitions between sedentary behaviors (i.e. sitting-to-stand or stand-to-sit). Since the STS event duration is much shorter than that of other major physical activities, we apply an anomaly event detection algorithm to handle the imbalanced training data.

Nineteen subjects (n=19) participated in the experiment. All participants were apprentic es on the training ship of the Mokpo National Maritime University in Korea. Before commencing the experiment, participants provided self-reported characteristics. Detailed information of participants is shown in Table 1.

The accelerometer sensor was placed in the chest pocket of the uniform of participants to avoid interrupt of their ordinary physical activity patterns. In this study, the Shimmer 3 sensor was used that is a low power wireless sensor platform to collect 3-dimensional acceleration [13]. The sampling frequency of the wearable sensor was set at 100 Hz. All subjects conducted about 20 min of structured activities including lying, sitting, STS, standing, and walking. The detailed activity description is in Table 2.

Table 2. Activities undertaken in the experiment.

Where ax is the lateral direction acceleration and g is the gravity. Then, the roll angle is calculated using the following equation:

Where ay is the antero-posterior direction acceleration and g is the gravity.

Where ax, ay and az are the lateral-, vertical-, and anterior direction accelerations, respectively. The mean of VM (mVM) and the standard deviation of VM (sdVM) were computed to measure dynamic movements of the upper trunk.

The four upper trunk motion features (i.e., roll, pitch, mVM, and sdVM) were applied to develop the seafarers’ physical activity classification models. To consider their unstable living condition, two models (i.e. with and without the STS detection) were developed. As shown in Figure 1, the 3D-acceleration showed the characteristics of each physical activity. Lying and walking activities showed apparently different patterns, whereas sitting and standing activities generated similar patterns each other. The misclassification of sitting and standing activities has been typical issues in sedentary behavior assessment using the wearable sensors (i.e., actigraph) [10-12]. 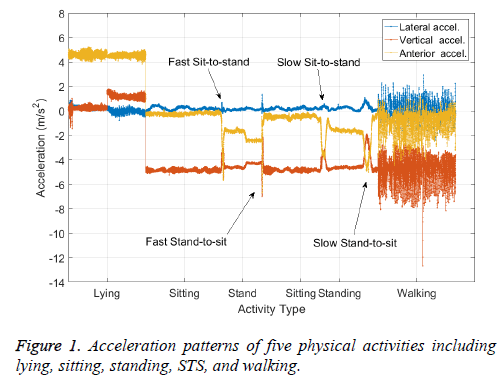 In the second model, the STS event detection was chosen as an indicator of the transition of the sedentary behaviors regardless of the directions of the STS. The second classification model classified four main physical activities (i.e. lying, sitting, standing, and walking) and the STS events (i.e., STS and non- STS) in parallel. The STS event detection was used to improve the classification accuracy of the sedentary activities. As shown in the Table 2, the total STS event duration was less than 10 of 900 s (i.e. roughly 1% of total duration) on average. The imbalanced training data of the STS event was a key while training STS events. The Euclidean distances-based outlier clustering algorithm [16,17] was applied for the classification of the STS events from the dominant non-STS events. For the supervised anomaly event detection, non-STS activities were trained first and applied to classify STS events [18]. The five activities (i.e. including lying, sitting, standing, STS, and walking) were re-labeled either STS or non-STS so that STS could be considered as the anomaly events compared to all other non-STS labels. The outcomes of this process were used to modify uncertain sedentary activities. The strategy of the sedentary activity modification algorithm is summarized below:

Step 1) Training criteria of four physical activities by the decision tree model, and then go to Step 2

Step 2) Training only STS event criteria by labeling activity either STS or non-STS, then go to Step 3

Step 5) Keeping a dominant activity and change a label as an unknown until the next STS, then Step 6

Step 6) Updating all unknown activity with the dominant static activity so far, then go to Step 3

The efficacy of using the STS detection was evaluated by comparing the two models. Both models accurately classified lying and walking activities. The Non-STS model significantly misclassified the standing activity. 35.8% of standing activity was misclassified as sitting since the acceleration patterns of both sitting and standing were not clearly distinguished. The STS-based model substantially improved the classification accuracy of two static activities by taking the majority prediction vote in the case of unclear static activity labels. The prediction accuracy of sitting and standing of the STS-based model were 97.3 % and 94.7 %, respectively (Table 4).

We developed two classification models to compare the efficacy of the STS detection in the improvement of seafarer physical activity classification in the unstable living environment. The non-STS model is likely to misclassify between the two sedentary activities; sitting and standing. Grouping the number of sedentary activities by using the STS event greatly improved the classification accuracy on sitting and standing activities. The anomaly event detection approach to training the imbalanced data accurately recognized the different tempos (i.e. fast STS and slow STS) and the directions (i.e. sitting-to-stand or stand-to-sit) of the STS events. The results of the experimental study clearly supported that it was feasible to accurately monitor the mariner’s prevalent physical inactivity during a sea voyage.

Although the outcomes of the proposed model were promising, the results were limited to a given scenario. The STS-based unknown data enhancing process is desired to consider as representative physical activity pattern recognition models in a real-world setting. Also, the STS direction recognition such as sitting-to-stand and stand-to-sit needs to be investigated further to improve the proposed models.