Purpose: to report annular choroidal detachment one year after Argus-II retinal prosthesis implantation. Patient: A 63-year-old male patient who had a history of Argus-II retinal implantation surgery in his left eye a year ago, referred to the clinic complaining of two weeks left eye irritation, redness, and mild pain. Result: On physical examination, the intraocular pressure (IOP) was 5 mmHg (hypotonia) and his visual acuity with the system on had no change compared to the previous examination. Rubeotic vessels were seen on iris especially around the papillary margin. On B-scan sonography annular choroidal detachment was seen, so the patient underwent 23 gauge vitrectomy and silicon oil was injected.Conclusion: This is the first report on annular spontaneous choroidal detachment after Argus-II retinal prosthesis.

The implantation of Argus-II retinal microarray electrode chip in cases with advanced to end-stage retinitis pigmenta (RP) has become a new frontier in vitreoretinal surgery. Yet, novel approaches are expectedly subject to a set of surgical challenges. Post-operatively, patients with Argus-II retinal implants are given steroid and topical antibiotics and advised to refer for typical follow-up visits to have any possible adverse events well-monitored [1-3]. Though we have had trivial to no challenges and intra and post-operative complications in 3 out of 4 patients with advanced retinitis pigmentosa (RP) who underwent Argus-II retinal implantation, one case developed annular choroidal detachment almost a year after surgery. This concise case report depicts the challenges faced in the above condition.

A 63 year-old male patient referred to our clinic complaining of two weeks left eye irritation, redness, and mild pain. He had a history of Argus-II retinal implantation surgery in his left eye a year before the presentation (certificate approval number: 11195211152). He has been a case of end-stage RP (Figures 1 and 2). 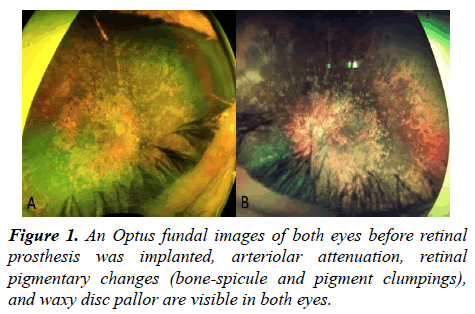 Figure 1: An Optus fundal images of both eyes before retinal prosthesis was implanted, arteriolar attenuation, retinal pigmentary changes (bone-spicule and pigment clumpings), and waxy disc pallor are visible in both eyes. 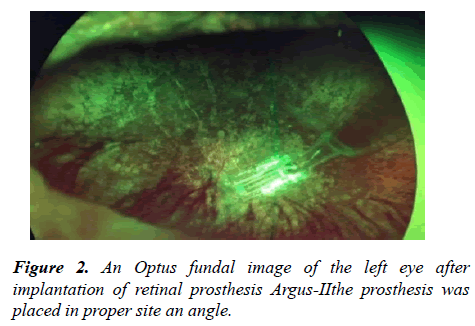 Figure 2: An Optus fundal image of the left eye after implantation of retinal prosthesis Argus-IIthe prosthesis was placed in proper site an angle.

Before surgery, his visual acuity was no light perception (NLP) in both eyes and after prosthesis implantation, in the last rehabilitation session, his visual acuity in the left eye was increased to good hand motion perception. Of note, he obtained a grating visual acuity better than 2.9 LogMAR when the Argus-II system was on. Over the last visual rehabilitation session, all his retinal prosthesis’ electrodes (i.e. 60 out of 60) were active with acceptable impedances and thresholds.

Having faced with the new complaint, the patient was precisely examined. On physical examination, the intraocular pressure (IOP) was 5 mmHg (hypotonia) and his visual acuity with the system on had no change compared to the previous examination. The globe was formed and no evidence of laceration or instrument extrusion was noted. The anterior chamber was formed, however, rubeotic vessels were seen on iris especially around the papillary margin. The intraocular lens (IOL) was properly in place. Since the vitreous cavity was full of hemorrhage, retina and prosthesis examination was not feasible (Figure 3). Upon a technical check of the Argus-II functionality, all 60 electrodes were found to be functional with mildly increased thresholds as compared to the previous examination. B-scan sonography was requested revealing annular choroidal detachment (CD) which stopped posteriorly in the margin of a retinal prosthesis. Also, some areas on CD were suspected for concurrent retinal detachment. 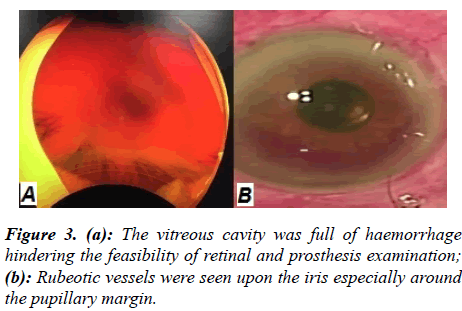 Figure 3: (a): The vitreous cavity was full of haemorrhage hindering the feasibility of retinal and prosthesis examination; (b): Rubeotic vessels were seen upon the iris especially around the pupillary margin.

The condition was described to the patient. He was debriefed about the urgent need for surgical intervention. The patient underwent 23-gauge three-port deep vitrectomy on the same day. Upon surgery, initially, three ports were placed then the vitreous cavity was cleaned (with no observable RD) and barrier laser therapy was done over the whole retina posteriorly to the margin of a retinal prosthesis having avoided any damage to the micro-array electrode ship then the air-fluid exchange was done and Finally, the vitreous cavity was filled with silicon oil (5700) and intravitreal bevacizumab (1.25 mg) was injected. One day postoperatively, the anterior chamber was formed while a droplet of silicon oil was observed in the anterior chamber. The IOL was properly in place, the retinal prosthesis was perfectly visible and CD was decreased. Topical and systemic steroids, as well as topical antibiotics, were prescribed and tapered-off over a month.

One month after the operation, the IOP was 13 mmHg.His visual acuity remained stable and the silicon droplet was observed in the anterior chamber. The rubeotic vessels regressed and 180 degrees temporal peripheral anterior synechia (PAS) was observed. Also, the retinal prosthesis was easily visible. Though the CD was decreased, it failed to fully disappear (Figure 4). 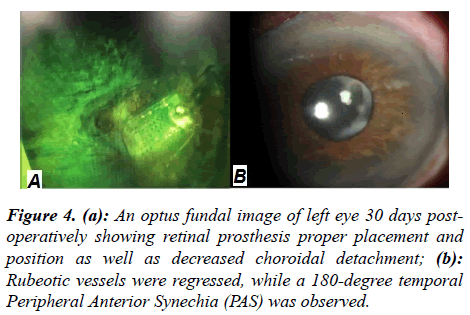 This is, to the best of our knowledge, the first report on annular spontaneous choroidal detachment after Argus-II retinal prosthesis implantation. The Argus-II retinal prosthesis (Second Sight Medical Products, Sylmar, CA, USA) is an epiretinal prosthesis approved for implantation in the patients with advanced retinitis pigmentosa [4-6]. Five-year longitudinal results of the Argus-II trials have revealed the long-term safety of the implanted device in patients with RP. A review of 30 eyes undergoing Argus-II implantation reported no related significant adverse effect in 60% of patients (18/30) [6]. Meanwhile, conjunctival erosion, hypotony, conjunctival dehiscence, presumed endophthalmitis, need for re-tacking and rhegmatogenous retinal detachment have been reported in some studies [6]. An important point in the case reported here was the history of sildenafil use for erectile dysfunction before complication. In a review of literature, there are some cases of choroidal congestion and intraocular hemorrhage following the use of phosphodiesterase inhibitors such as sildenafil and tadalafil. This has been correlated with the vasodilatory effect of such drugs on ocular vessels [7-10]. Likewise, there has been a report on tadalafil-induced subretinal and choroidal haemorrhage in a patient with unsuspected choroidal melanoma [11]. In our case, there was neither a history of trauma before complication nor any evidence favoring melanoma in ocular sonography. Our patient is stable at this time and we plan to pursue a close follow-up on his condition.

Authors declared no conflict of interest subjected to this work and no funding support received in preparation of the present report. The present case report portrays annular spontaneous choroidal detachment after Argus-II retinal prosthesis in a case of advanced retinitis pigmentosa.