Angiogenic factors in the pathogenesis and pathophysiology of preeclampsia: A Mini review

Preeclampsia (PE) the de novo occurrence of hypertension and proteinuria after the 20th week of gestation is a major cause of maternal and fetal morbidity worldwide. While the etiology of PE is still unclear, clinical phenotypes have been associated with high circulating levels of anti-angiogenic proteins such as soluble Fms-like tyrosine kinase 1 (sFlt1) and soluble endoglin (sEng). Furthermore PE is associated with low serum free placental growth factor (PIGF) and free vascular endothelial growth factor (VEGF). Since alterations in levels of these factors precede the onset of clinical disease, have these factors may be useful to screen or identify patients at risk for PE. Women with a history of PE have an increased risk of hypertension, and cardiovascular and renal disease Therefore, this raises the possibility of measuring circulating angiogenic proteins in the blood and the urine as a diagnostic and screening tool for PE. The availability of a test to predict PE would be a powerful tool in preventing PE-induced mortality, especially in developing nations, where high-risk specialists are limited. This review will summarize our current understanding of the role of circulating angiogenic proteins in the pathogenesis and clinical diagnosis/prediction of PE.

Preeclampsia (PE) is a pregnancy induced hypertensive disorder that by usually affects 3% - 5% of first pregnancy and is a leading cause of maternal and fetal mortality. As many as 8,370,000 cases of PE per year are seen [1]. This disorder characterized by the development of a maternal syndrome that includes, proteinuria, haemolysis, liver abnormalities, thrombocytopenia (HELLP Syndrome), seizures (eclampsia) coagulations abnormalities, edema, and vascular abnormalities [2,3]. The underlying mechanism that places women with a history of PE at risk for hypertension and CVD remains speculative. In addition the etiology of PE remains largely unknown but it is known to be related to endothelial dysfunction. However, investigations on this disorder offer potential treatment [4].

The genetic cause of PE is still unclear, and genes contributing linked to PE have yet to be elucidated. However, studies have reported an association between PE and polymorphisms of genes that control hypertension, coagulations or oxidative stress metabolism, such as rennin, angiotensinogen, endothelial nitric oxide synthase (eNOS), Factor V LEIDEN, methyltetrahydrofolate or lipoprotein lipase [8-12]. A number of these factors are also associated with recurrent fetal loss [13,14] and emphasizes the contribution of PE to fetal loss. Thrombophilic mutations of the two vital thrombophilia markers, factor V Leiden (FVL) and prothrombin G20210A as a genetic factor may contribute to PE which tends to progress into recurrent pregnancy loss among the Asian population [15]. Most PE cases are seldom categorized as hereditary disease. However first degree relative of a women with PE are often at risk of this hypertensive disorder depending on the severity of the disease [16].

PE is categorized a disorder of the first pregnancy. However, investigations showed that multiparous women frequently lost their protective factors from encountering PE if their pregnancy is with a new partner and said to be at risk similar to that of primiparous women [17]. The risk of PE decreases as the women is continuously exposed to specific antigens from the same partner. Although the potential risk of PE on multiparity is reduced, interpregnancy interval may lead to increased risk of encountering this disease [18]. Pre-existing maternal factors such as previous history of preeclampsia, multiple pregnancy, and nulliparity were found to increase the risk of PE.

Insulin resistance, obesity and thrombophilia are the other factors that influence PE [19-21]. Protein-calorie under nutrition [22] is another important risk factor which has been discovered in developing countries, and calcium supplementation does not promote/initiate the increased risk of preeclampsia [23]. Multifestal gestations and hydatidiform moles are also associated with increased preeclampsia risk [24].

Pathogenesis and Pathophysiology of PE

Vascularization is an important process which involves vasculogenesis (formation of new blood vessel) and angiogenesis (formation of growth blood vessel) for a proper formation and complete development of placenta [25]. Defects in placental perfusion is an initial event in PE leads to vascular endothelial dysfunction by the mechanisms that remain unclear [26]. It has been suggested that release of factors from the placenta in response to ischemia results in dysfunction of the endothelium of maternal circulation [27]. Studies using serum from preeclamptic women have shown that cultured endothelial cells respond with an increased expression and release of growth factors and fibronectin, induction of oxygen radicals, as well as an inhibition of prostacyclin production [28,29].

Normal placental development involves extravillous cytotrophoblastic invasion of the uterine spiral arteries of the deciduas and myometrium. The invasive fetal cells replace the endothelial layer of uterine vessels, transforming them from small resistant vessels to flaccid high caliber capacitance vessels (Fig.1). In PE, the increase in uterine blood flow needed to sustain the fetus through pregnancy is insufficient. Cytotrophoblast invasion of the arteries is limited to the superficial deciduas and the myometrial segments remain narrow [30]. Fisher et al shown that in normal placental development, invasive cytotrophoblasts downregulate the expression of adhesion molecules characteristics of their epithelial cell origin and adopt endothelial cell-surface adhesion phenotype, a process dubbed pseudovasculogenesis [31] or vascular mimicry. In PE, cytotrophoblast do not undergo this switching of cellsurface intergrins and adhesion molecules, and they fail to adequately invade the myometrial spiral arteries. 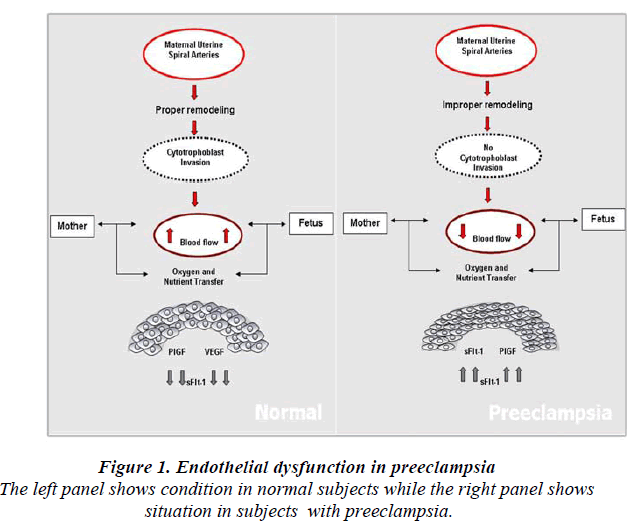 Endothelial dysfunction, a central component of the pathophysiology of PE, is known to contribute in the pathogenesis of hypertension and cardiovascular diseases. Hypertension associated with PE develops during pregnancy and remits after delivery, implicating the placenta as the central cause of the disease. Intact endothelial cells have antiadhesive and anticoagulant properties, regulate vascular permeability and modulate the effect of vasoconstrictor agonist on the vessel wall [32]. Several lines of evidence support the hypothesis that dysfunction of the vascular endothelium is important in the pathogenesis of PE [33]. The vascular response to vascontrictors, the tendency for coagulation [34], permeability of capillaries [35] and the plasma concentration of fibronectin and endothelin is greatly enhanced in preeclamptic women [36,37]. Although some studies have reported no significant changes in circulating levels of endothelin during pregnancy-induced hypertension, a role for endothelin as a paracrine or autocrine agent in PE remains worthy of consideration.

Hypertension and proteinurea the hallmarks of PE, occur due to excess circulating anti-angiogenic peptides produced by the placenta, which is the soluble fms-like tyrosine kinase 1 (sFlt-1, also referred to as sVEGFR-1) (antiangiogenic factors) [25]. In context to pro-angiogenic proteins such as vascular endothelial growth factor (VEGF) and placental growth factor (PIGF), the presence of sFlt-1 has been shown to cause hypertension, proteinurea and glomerular endotheliosis in rats [37]. Studies have shown that patient diagnosed with PE had an elevated level of sFlt-1 in maternal serum or plasma compared to the pro-angiogenic factors [25].

It acts as a VEGF and PIGF antagonist [39] by preventing the interaction of the pro-angiogenic factors with the endothelial receptors on the cell surface and induces endothelial dysfunction which subsequently leads to PE (Fig.2). Elevated levels of circulating angiogenic proteins/ factors in the maternal serum or plasma in pregnancy would discriminate normal pregnancy from PE. Levels of sFlt-1 remain stable during gestational age of 16-20 weeks and increase steadily during the 24-28 weeks of gestation period until term [40]. In PE, the levels of sFlt-1 are found to be highly increased as compared to PIGF levels [25]. These data suggest that, sFlt-1 to PIGF ratio could be a predictive marker for the early onset of PE rather than measuring sFlt-1 or PIGF levels alone [41]. 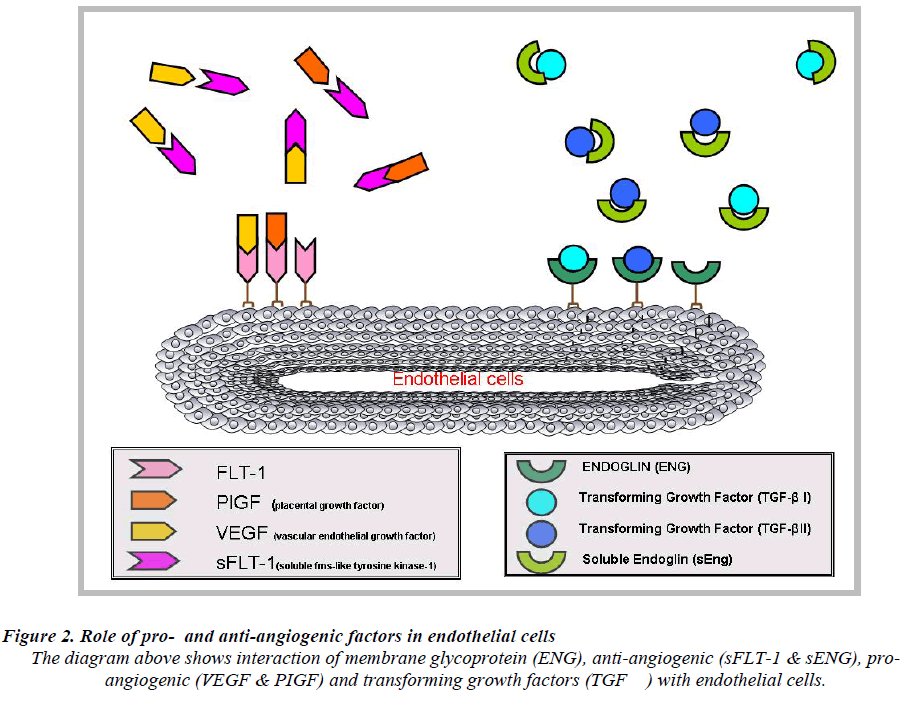 Figure 2: Role of pro- and anti-angiogenic factors in endothelial cells

Endoglin (ENG) also known as CD105 [42], was earlier discovered by a monoclonal antibody (44G4) raised against a pre-B lymphobalstic HOON cell line [43]. ENG encodes for type 1 integral membrane glycoprotein [44] and mutations in ENG cause an autosomal-dominant disorder disease known as hereditary haemorrhagic telangiectasia type 1 (HHT1), this disorder is characterized by arteriovenous malformations and focal loss of capillaries [45]. ENG functions as an receptor for several transforming growth factor super family members [46]. ENG act as a protein modulator of TGF-β signaling by interaction with TGF-β1 and TGF-β2 [47]. It is identified as an accessory receptor for TGF-β as it plays a versatile role in tumor angiogenesis [45,48]. In PE [42], focus on ENG is due to the fact that ENG has a major contribution to vasculogenesis and disease [49].

As an auxiliary receptor, [54] it act as signaling response modulator protein of multiple members of the TGF-β family [55] and involved in TGF-β independent signaling [56]. Futhermore, a soluble form of endoglin (sEng) has been found, most likely generated by proteolytic shedding, which antagonizes the membrane bound form [42]. Taken together, multiple layers of complexity exist by which the function of endoglin is regulated.

Placental endoglin(ENG), a member of TGF-β family is found overexpressed in PE and circulates as soluble endoglin (sEng) in maternal sera/plasma [39,57]. Circulatory levels are dependent on the severity of PE whereby concentration of sEng is much higher as in PE compared to normal cases [25,42].sEng an anti-angiogenic factor, acts as a TGF-β antagonist where it adheres to the TGF- β1 and TGF-β3 receptor and blocks these molecules from binding to the endothelial cell surface, [58] and consequently suppresses the pro-angiogenic and vasodilatory effects of TGF-β1 / TGF-β3 leading to endothelial dysfunction [46].

Soluble endoglin (sEng) acts as an antagonist to TGF-β families by preventing endothelial capillary tube formation and promotes vascular permeability [42]. Overexpression of sEng by adenoviral vector in rats is associated with milder proteinuria and hypertension as compared to overexpression of sFlt-1 alone [25]. Co-expression of sEng and sFlt-1 in rats results in the development of severe proteinuria, hypertension, intrauterine growth restriction, lower platelet counts and elevated LDH similar to that in the HELP syndrome [42].These data suggest that sEng and sFlt-1 both causes endothelial dysfunction by different mechanism but may act in concert to produce to the clinical syndrome of PE [25].

Altered levels of circulating angiogenic factors, especially sFlt1, sEng, and PlGF, have been reported to precede the onset of preeclampsia. Excessive levels of circulating anti-endothelial factors produced by the abnormal placenta cause generalized endothelial dysfunction prominent in the maternal syndrome, but the origins of abnormal placentation and its specific role in preeclampsia are still not well understood. Prospective studies to characterize the role of circulating proteins with mediators of endothelial dysfunction, such as sFlt-1, should help shed light on the pathologic mechanisms of the maternal syndrome.

Authors are grateful to Ministry of Science, Technology and Innovation (MOSTI), Malaysia for supporting this work.