Patients and Methods: A total of 30 juvenile rats were selected to establish bilateral tibia fracture model and then randomly divided into Angelica group and the control. The rats in Angelica group were fixed with plaster and received Angelica lavage every day. X-ray was used to observe tibia fracture. Bone Morphogenetic Protein 2 (BMP-2) expression at the fracture was tested by in situ hybridization. BMSCs were separated upon density gradient method and divided into Angelica group and the control group. Cell proliferation was evaluated by MTT assay. Supernatant VEGF protein concentration was detected by ELSIA assay.

Though child fracture is not common, it can cause fracture healing delay. It is the main cause of disability and death that seriously affects the quality of life [1,2]. Therefore, its prevention and treatment draw more and more attention. There are serious limitations of current therapy in clinical application, and the long-term prognosis is still not very satisfied [3]. In recent years, child fracture treatment upon stem cells became the hotspot in medicine and biology [4]. Bone Marrow Stem Cells (BMSCs) became the focus of attention in basic research and clinical treatment because of its easily acquisition and large amount. BMSCs are featured as active differentiation and proliferation, and form osteoblasts in the fracture site. However, the time needed of their differentiation into osteoblasts seriously affected the timely healing of child fracture [5]. How to accelerate BMSCs differentiation into osteoblast is an urgent problem need to be solved. Following the development of traditional Chinese medicine research, more and more results showed that traditional Chinese medicine has great potential in the treatment of child fracture. Modern pharmacology study found that some traditional Chinese medicines can regulate related cytokines, including interleukins, Tumor Necrosis Factor (TNF), Colony Stimulating Factors (CSFs), induce B cells to produce antibodies, enhance Vascular Endothelial Growth Factor (VEGF) expression, increase the number of the blood vessel cells regeneration factor, and promote angiogenesis [6,7]. Therefore, it is necessary to investigate the role of traditional Chinese medicine in child fracture.

Angelica is an umbrelliferae plant containing a large amount of amino acids and microelements. Modern pharmacology study showed that Angelica was effective in anti-oxidation and improving immune function. Recent research demonstrated that the main effective components of Angelica can promote BMSCs proliferation and vascular endothelial growth factor production [8-10]. This study intends to discuss the effect of Angelica in facilitating juvenile rat fracture healing and bone marrow stem cells proliferation, aiming to provide theoretical basis for the application of Angelica in child fracture treatment.

Angelica decoction was prepared by traditional method. The Angelica at 1 g/ml was filtered, regulated at pH=7.0~7.4, and stored in 4°C.

DMEM medium was from Gibco. FBS was from Hyclone. MTT and trypsin were got from Sigma. VEGF ELISA kit was from Shanghai Zhuokang biological technology co., LTD. VEGF primary antibody was from Santa Cruz.

The rats were purchased from Shandong University West China Center of Medical Sciences. The rats were anesthetized by 3% pentobarbital sodium intraperitoneal injection at 30 mg/kg. The posterior limb was disinfected by iodine and incised on the dorsal of middle tibia for 2 cm. Then the skin and subcutaneous tissue were separated to expose the tibia. Tibia fracture was made by rongeur avoid of damaging blood vessels and nerves. Penicillin was intramuscular injected at 400,000 IU/d for three days after surgery to prevent infection. The rats in Angelica group received 5 ml Angelica decoction (1 g/ml) lavage every day, whereas the rats in control received normal saline lavage.

Rats were used for all experiments, and all procedures were approved by the Animal Ethics Committee of Jining No.1 People’s Hospital.

A total of 10 juvenile rats were killed to extract posterior limbs. The marrow cavity of thighbone and tibia was opened and flushed by DMEM medium containing 10% FBS. The bone marrow suspension was added to the 10 ml centrifuge tube containing bandicoot percoll with density at 1.094. BMSCs were separated by density gradient method and cultured in complete medium at 37°C and 5% CO2. After 48 h, the medium was changed every other day. BMSCs in control were maintained in medium containing 15% FBS. The cells in Angelica group were treated by Angelica at 1.0 mg/L, 2.0 mg/L, and 5.0 mg/L, respectively.

The cells in logarithmic phase were digested and seeded in 96- well plate at 5 × 103 cells/well. The cells were treated by 100 μl Angelica at different concentrations for 72 h. Next, the plate was added with MTT at 5 mg/ml for 4 h. After treated by 150 μl DMSO, the plate was measured on microplate reader.

The statistical analysis was performed on SPSS 17.0 software. Each experiment was repeated for three times. Measurement data was depicted as ͞x ± s, while enumeration data was compared by chi-square test. Multivariate analysis was applied using binary Logistic regression analysis. P<0.05 was considered as statistical significance.

The rats in each group can walk using anterior limb after anesthetic awareness. They showed free activities and normal feeding and drinking in cage on the 1st day after surgery. No rats exhibited wound swelling or weeping.

Figure 1: X-ray comparison between angelica group and control on the 4th week after surgery. 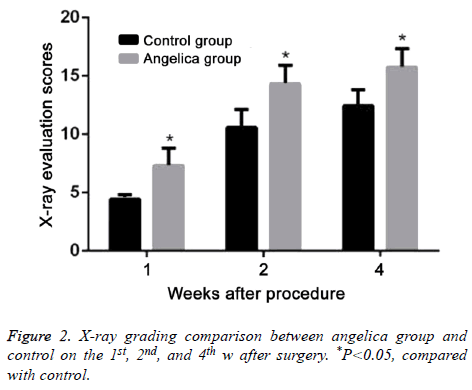 Figure 2: X-ray grading comparison between angelica group and control on the 1st, 2nd, and 4th w after surgery. *P<0.05, compared with control.

Fibrous callus appeared and BMP-2 mRNA elevated in Angelica group at the first week, while BMP-2 mRNA also expressed in the mature chondrocytes of external callus. No callus and significant positive staining in fibroblasts were found in control. BMP-2 mRNA was found largely expressed in osteoblasts, bone cells, cartilage matrix, and mesenchymal cells from Angelica group, whereas it was weakly positively expressed in chondrocytes and osteoblasts from control at the second week after modeling. At the fourth week after operation, the positive cell number and range markedly declined, and the trabecular bone arranged densely. The positive staining of BMP-2 in Angelica group at the 1st and 2nd weeks was obviously stronger than that in control (Figure 3, Table 1). 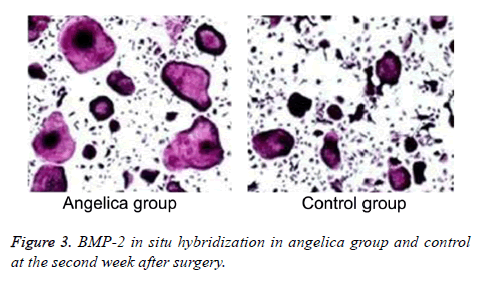 Figure 3: BMP-2 in situ hybridization in angelica group and control at the second week after surgery. 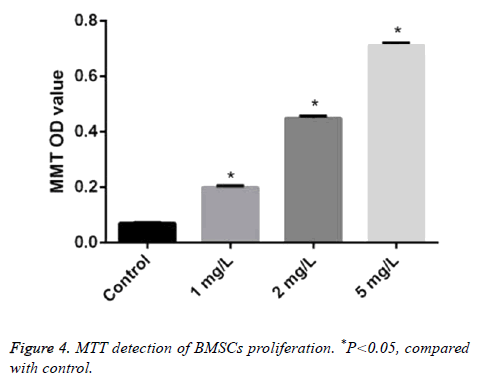 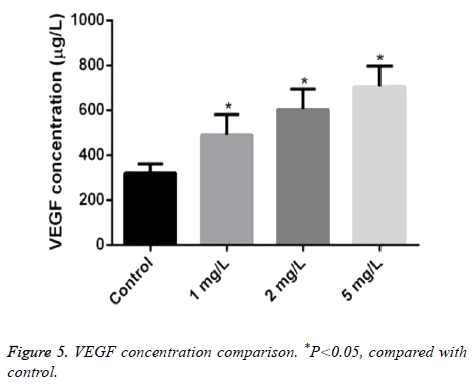 Child fractures is not common, however, its occurrence will cause fracture healing delay. As the main cause of disability and death in child fracture, fracture healing delay seriously affected the quality of life and long-term prognosis. At present, there is still lack of ideal treatment for child fracture. Angelica, as a Chinese medicine, is an important drug for tonifying Qi, blood replenishment, and blood activation. It often cooperates with other drugs in the treatment of lingering pathogen due to deficient vital qi and double deficient. Modern pharmacology study showed that Angelica has the effect of enhancing immunity, improving microcirculation, inhibiting platelet activity, and reducing the inflammatory response of vascular endothelium cells [8-10]. Traditional Chinese medicine theory considered that "bone cannot connect without live blood". Thus, promoting qi to activate blood is an important aspect for fracture treatment. It was revealed that the drug replenish the blood can obviously increase the number and diameter of capillary near the fracture site and improve microcirculation to promote fracture healing.

BMP is a type of growth factor with a variety of functions. BMP-2 is composed of two peptides, including the 147 amino acids. One of the main biological activities of BMP-2 is to regulate embryonic development and induce osteogenesis [11]. In addition, BMP-2 can affect the fracture repair ability [12]. Since the most important biological activity of BMP-2 is to induce osteogenesis [13], it can induce undifferentiated mesenchymal stem cells to differentiate into chondrocytes, further forming cartilage, and eventually mineralizing to bone tissue. Finally, it can induce osteogenesis through entochondrostosis [14,15].

Our results showed that the rats received Angelica lavage had callus formation at the first week after operation. At the second week, the fracture was completely filled by callus. At the fourth week, the fracture exhibited cortical bone reconstruction and the medullary cavity recanalization. In addition, in situ hybridization demonstrated that BMP-2 mRNA expression in Angelica group was obviously higher than that of control, suggesting that Angelica can obviously elevate BMP-2 expression in the fracture site of the juvenile rats. Xu et al. reported that Angelica significantly increased BMP-2 mRNA expression in BMSCs with dose and time dependence. Moreover, such effect was accomplished through Transforming Growth Factor-β (TGF-β) [16].

VEGF molecule is a dimer made up of two identical polypeptides through disulfide bond. There are seven members in the family and all have the ability to induce endothelial cell proliferation. VEGF plays an important role in the process of fracture healing. It was found that VEGF highly expressed in the mesenchymal stem cells at fracture site and participated in the repair of osteoblasts and chondrocytes. Moreover, VEGF can stimulate endothelial cell differentiation and proliferation together with bFGF, thus accelerating cartilage calcification and bone reconstruction [20-22]. Street et al. found in animal model that local application of VEGF in rat femur fracture can promote the fracture healing and bone formation [23]. Peng et al. also revealed that exogenous VEGF can accelerate fracture healing and bone formation [24]. Muschler et al. confirmed in the animal experiments that VEGF can activate BMSCs to proliferation and differentiation to the desired direction, which is beneficial to fracture healing [25]. Gao et al. discovered that Angelica decoction used on New Zealand white rabbit with bilateral upper radius fractures can obviously increase the content of VEGF in serum and fracture site. This effect is associated with Angelica stimulates callus tissue secreting BMP [26].

This study presented that compared with control, BMSCs proliferation elevated in Angelica group with dose dependence. Furthermore, VEGF concentration in supernatant from Angelica group significantly upregulated with dose dependence. It suggested that Angelica could promote BMSCs proliferation and VEGF expression, which may be a mechanism of Angelica promoting juvenile rat fracture healing.