Objective: This study was to investigate the relationship between recurrent oral ulcer and cow's milk allergy.

Recurrent oral ulcer induced by food allergy was a kind of oral mucosal disease with unknown etiological factors and accounted for about 20% in the global morbidity, especially the patients less than 20 years accounted for the majority [1,2]. It was worth noting that according to a lot of literatures, there was a certain correlation between the occurrence of recurrent oral ulcer and quite a few food allergens. However, there were still studies with negative attitude [3]. Many factors such as the then living environment, food habits and work pressure perhaps jointly determined the situation that at that time, there was not much correlation between the condition of patients with recurrent oral ulcer and food allergy. However, so far, the research on recurrent oral ulcer induced by food allergy had increasingly attracted medical experts and scholars [4,5] and one simple reason was perhaps: patients could voluntarily get rid of the diet therapy in the treatment [6].

At present, the conventional method to treat current oral ulcer was mainly the local drug therapy in China. More applications were oral ulcer film with quite a few traditional Chinese medicine or western medicine components and conventional drug therapeutic schedules such as vitamins, trace elements, and levomisole and so on [7-9]. The above-mentioned therapeutic schedules suited symptoms in most cases and failed to make a treatment targeted for clear etiological factors. In addition, the schedules only aimed to ease severe pain due to skin and mucosa ulceration rather than solved essential problems. Therefore, it was very crucial to find out and confirm the real pathological factors of recurrent oral ulcer. Detailed and in-depth research could be made from quite a few aspects such as psychological factors, food allergen, vitamin deficiency, infectious substances and trauma [10-12].

Among them, MiAU accounts for 80% of the total incidence, mainly showing local sensitivity, discomfort and some tenderness or burning sensation before aphtha. Most patients have such symptoms. Ulceration generally covers the area of 2~4 mm2, and is with neat edge, blush of about 1 mm in width, soft base, concave shape in the middle, is covered with grayish yellow or light yellow and white fibrinous pseudomembrane, and brings increasing pain. There are about 1~5 ulcers each time. And ulceration easily occurs in the mucous membrane of non-keratin areas such as lips and cheek. MjAU, also called recurrent necrotizing mucosal inflammation, is similar to MiAU in incidence. But its ulceration covers bigger and deeper area and has 10~30 mm in diameters, reaching lower mucous membrane and even muscular layer. The tissues around the ulceration are swollen and slightly raised. Most of ulcers are neat and are with scars or defects after healing. HU is characterized by small ulcers, with the diameter of only 1~2 mm. However, there are dozens or more ulcers. They can be distributed in any parts of mucous membrane and integrate with the adjacent ulcers into a large ulcer. In addition, the peripheral mucous membrane is congestive, which is relative rare. The incidence is less than 20%.

The research collects 128 patients with recurrent oral ulcer that saw a doctor in our hospital from 2010 to 2015. All the patients joined this study with informed consents. The occurrence rate were calculated according to the detailed data of medical history and comprehensive laboratory test results including serum specificity IgE of food allergy, food IgG test and oral food challenge test, and were described in detail, the patients’ basic information and pathogenetic characteristics from several aspects such as the pathogenetic stage, type, starting time, ulceration healing time and food allergen.

Patients included in the research first should meet the diagnostic criteria of recurrent oral ulcer including definition and clinical manifestations and then meet the following conditions: medical history >2 years, incidence >more than 3 times within a year, no drug treatment within the latest 2 weeks, no systemic diseases.

Analysis of diagnosis and treatment

The paper analyzes the data about inspection and medical history from the perspective of food allergy. Among them, the paper comprehensively analyzes serum specificity IgE, oral food challenge test results, allergic history, and treatment history and other aspects in order to further find out the relationship between food allergy and recurrent oral ulcer, and make treatment based on elimination diet method in the field of food allergy accompanied by simple antihistamine drug treatment to successfully treat symptoms and root causes. Therefore, the paper suggests that all patients with recurrent oral ulcer induced by food allergy should make a two-week elimination diet schedule in allusion to their respective tested food allergens. 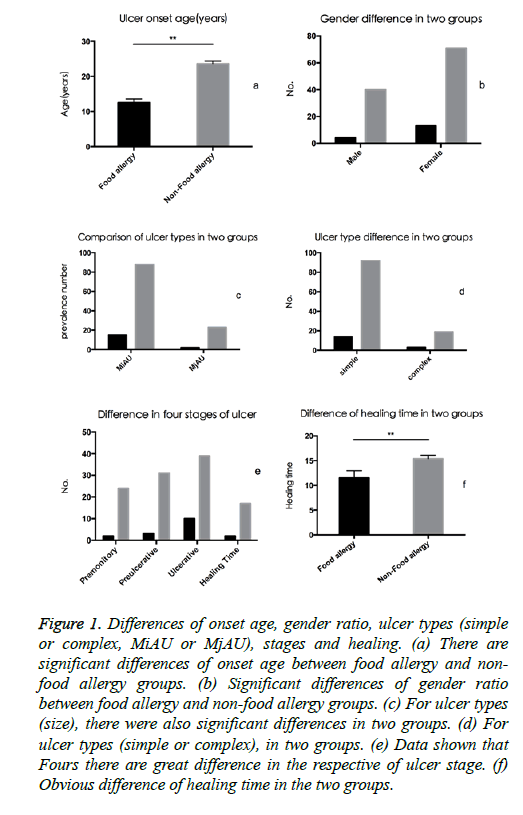 An 18 year old man saw a doctor in our allergic reaction department. The patient had found that his tongue and lips were often with oral ulcer about 2 years ago. At first, he felt discomfort due to the situation that his tongue seemed pricked by a needle and led to burning sensation; after 2 days, his condition deteriorated. He had quite a few small ulcers (with the diameter of 1~2 mm) in his mouth. The most serious situation was what seen in the picture before treatment: part of tissues had become necrotic and black in the tip of the tongue.

The patient received the Behcet syndrome treatment and took tripterygium glycosides for nearly 2 weeks, but his clinical symptoms failed to be improved. According to the collected data about medical history, the patient often ate a large number of dairy products including milk, cheese, and yogurt and others. This provided a clue for us. He perhaps became allergic to milk; after all, he ate a large number of milk and related dairy products for a long time. Therefore, we tried to screen common allergens including milk and related dairy products for the patient and found that his serum-milk specificity IgE and IgG slightly rose. At the same time, his specificity IgE of rice, wheat, egg, shrimp, and crab and others showed negative. In addition, he received 15 ml milk oral challenge test and felt that the tongue was painful. His lips became pale and congestive points gradually occurred in the tip of the tongue. Considering that the patient had obviously showed food allergic reaction and would suffer severe allergic shock if he ate more milk, we determined to give up the further test after he ate milk of 15 m. The results of blood routine examination including alanine aminotransferase level (49 mmol/L), total carbon dioxide content (28 mmol/L), triglyceride (1.75 mmol/L), serum apolipoprotein (1.85 g/L), lipoprotein (a) (0.30 g/L), and glycosylated serum protein (11.3%) were normal. We suggested that after seeing a doctor in our allergic reaction department, the patients should refuse to eat milk and related dairy products for 14 days, took ebastine for 7 days (10 mg/piece, 1 piece/day). Ebastine was mainly used to avoid the situation that the patient perhaps suffered other allergic reactions in the process of avoiding milk after eating milk for a long time. The follow-up period was 6 months. During the period, the patient did not suffer recurrent oral ulcer once again. The response comparison between pre-therapy and posttherapy, the patients suffered obviously different oral ulcer symptoms, as shown in Figure 2. 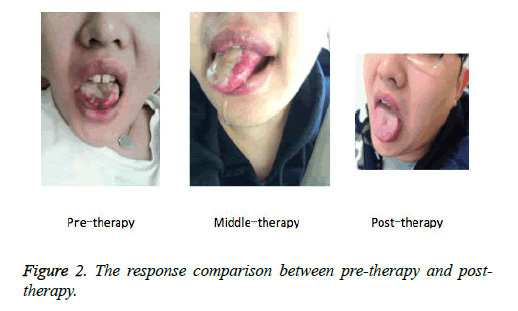 Figure 2: The response comparison between pre-therapy and posttherapy.

Oral ulcer is the most common in oral mucosal diseases. Common cold, indigestion, mental tension, and depression and others occur occasionally. Oral ulcer easily occurs in lips, cheek, and lingual margin and others and any parts of mucous membrane, but it rarely occurs in attached gingiva and hard palate with completely keratinization. It mainly attacked the 10~20-year-old groups and generally could self-heal within 10 days. But if it often occurred or rises here and subsides there, it was called recurrent oral ulcer [18].

The reduction in the cell number of CD4 (+) CD25 (+) Foxp3 (+) Treg at the molecular level and peripheral blood would increase the prevalence rate of recurrent oral ulcer. In addition, indolamine 2, 3-dioxygenase mRNA played an important role in protecting patients with recurrent oral ulcer [19]. What’s more, as ulcer developed, TNF-αand IL-2 level rose and IL-10 level trended to be normal. There were many different allergies in milk. And casein, β-milk protein and α-milk protein were the most common allergens. In most cases, milk allergy was caused by the above 3 allergens [20,21], possible CMA mechanism has been shown in Figure 3. More mechanism or an unclear antibody or a factor needs to be investigated in detail. 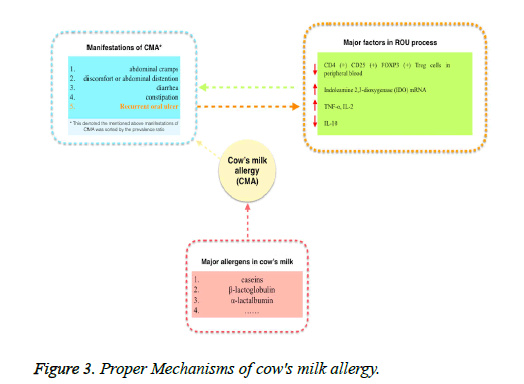