Objective: Impaired insulin resistance, insulin secretion and dysregulation of lipid and protein metabolism followed by environmental and genetic factors cause to Type 2 Diabetes Mellitus (T2DM) which is a complex polygenic disorder. Several studies have been reported that ATP Binding Cassette Transporter A1 (ABCA1) gene polymorphisms in known as one of the genetic risk factor for T2DM. This study was conducted to determine the frequency of ABCA1 gene by rs2230808 (R1587K) polymorphism in Malaysian subjects.

Methods: The genotype for ABCA1 gene polymorphism was determined based on high resolution melting-PCR among 164 T2DM and 165 control subjects.

Conclusion: The R1587K polymorphism of ABCA1 gene cannot be considered as a genetic risk factor for T2DM among Malaysian subjects.

Prediabetes known as a middle state of hyperglycaemia with glycaemic parameters. Today different organizations have been describing the prediabetes with different criteria’s that is not shown as a uniform pattern [1]. According to the American Diabetes Association (ADA), the terms of pre-diabetes refers to the metabolic clinical condition that is able to influence an individual for the future development of diabetes [2]. Also, World Health Organization (WHO) definition for prediabetes is a state of intermediate hyperglycaemia using two specific parameters, impaired Fasting Glucose (IFG) and/or Impaired Glucose Tolerance (IGT) or a combination of the two based on a 2 hours Oral Glucose Tolerance Test (OGTT) [1]. Such evidences suggest association between prediabetes and complications of diabetes such early nephropathy, small fiber neuropathy, early retinopathy and risk of macrovascular disease [1].

One of the four preferences Non-Communicable Diseases (NCDs), which identified by the WHO is diabetes [3]. In Malaysia, based on the latest National Health and Morbidity Survey in 2015, the prevalence of diabetes mellitus was reported as 17.5% [4]. Diabetes has become the global leading causes of mortality and morbidity due to its complications [5].

The prevalence of T2DM is increasing to 300 million people by the year 2025 [6]. Impaired insulin resistance, insulin secretion and dysregulation of lipid and protein metabolism with environmental and genetic factors cause to T2DM which is a complex polygenic disorder [7]. The role of genetic polymorphisms involved in diabetes is still remaining unclear; however, several association researches suggested various candidate genes for T2DM in different populations [8]. To provide the supporting evidence for the role of gene polymorphism in individuals, can refer the subjects to the genetic and allelic frequency of polymorphism among studied groups. The genetic polymorphisms of ABCA1 gene provide a basis for studying the association between genetic variants and the development of T2DM in different ethnic groups. Transport of cholesterol and phospholipids from cells to lipid-poor apolipoproteins mediated by ABCA1 gene, which located on the chromosome 9 region q31.1 [9]. This study was conducted to determine genetic polymorphism of the rs2230808 (R1587K) among T2DM subjects.

Ethical approval has been obtained from the ethical committee of the National heart Institute, Malaysia (Ref No. IJNEC/05/10 (02)). A total of 164 T2DM subjects were collected from National Heart Institute, Kuala Lumpur. Subjects were selected as (adults>30 years old) who has been diagnosed with T2DM. A questionnaire in both Malay and English languages were obtained to assess the socio-demographic factors. Informed consent was obtained from all the subjects who have participated in this study. A total of 165 control individuals were recruited from the healthy respondents who didn’t haveT2DM at the time of sample collection. All the subjects has been selected based on the inclusion/exclusion criteria and those who had been diagnosed with any type of cancer, type 1 diabetes, genetic malformation and pregnancy were excluded from this study.

The buccal and blood specimens were collected from the case and control subjects respectively. The genomic DNA was extracted by using the commercial buccal and blood extraction kits (QIGEN) and was stored at-20ᴼC for further analysis. PCR optimization was carried out for all primers, followed by DNA qualifications (gel electrophoresis) and qualification (Nano drop in two OD wave lengths 260 nm and 280 nm) before amplification of the candidate genes.

Genotyping of this polymorphism was done based on real time PCR-HRM and the primers were designed and synthesized by NextGene Sdn Bhd. The PCR products of samples that were amplified from the respective genes were sequenced and confirmed with the databases. In each cycling condition, the positive control for the respective genes followed by the negative control consisted of PCR-grade water lacking the DNA template was used accordingly. All samples were genotyped by high resolution melting analysis by Rotor Gene 6000. PCR primers for R1587K were forward primer CTACTAGAACAAAGACAGCGGTTTACC and reverse primer CGATTTCTCAACAGCTTGGGAAGAT. PCR was performed in a volume of 25 μL consisting of about 1 μL of genomic DNA, 0.5 μL each of forward and reverse primers, 13 μL water and 10 μL of master mix for HRM (Epitect HRM Mastermix, QIGEN). The temperature was kept hold at 95 for 5 min for denaturation followed by 40 cycles of 20 s at 95°C, 10 s at 55°C, and 20 s at 72°C. The melting curves were normalized (temperature ranges on each side of the melting transition were chosen and the data points for a given sample were scaled between 0 and 100% fluorescent intensity). Based on used control samples (wild type (WT) and Homozygous mutant (HOM)) were confirmed by sequencing. Table 1 demonstrated the sequence and length and Tm of each primer.

Table 1. Clinical and biochemical characteristics according to the genotypes of the subjects.

To analyse the data in this study, the Statistical Package for Social Science (SPSS) (Version 21) was assisted. Descriptive statistics were utilized to analyse all variable information such as socio-demographic and anthropometric factors followed by the genotypes of all the study subjects. Moreover, all of these factors were compared by using Student’s t-test, and one way ANOVA test to compare the group means and a level of p<0.05 was considered as a statistically significant. Confidence intervals (95%) were reported where appropriate. Allelic frequencies were calculated by the gene counting method and the genotype distribution with Hardy-Weinberg by assisting the chi-squared test.

Analysis of R1587K polymorphism with 86 bp PCR product with mutation (A → G) was amplified by PCR-HRM. Three different genotypes of R1587K were detected through this method with special difference between the shapes of each curve. After running a few samples with different shifting curves confirm those genotyping patterns by sequencing and use them as a reference samples. Figure 1 showed three different graphs that has been detected during the genotyping of R1587K polymorphism of ABCA1gene (homozygous, heterozygous and wildtype). 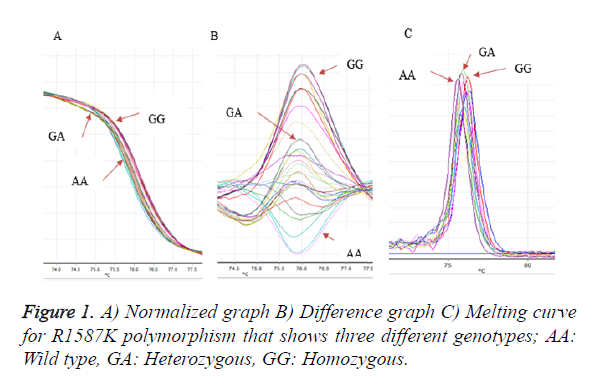 In this study 329 subjects were participated that were divided into 2 groups: 165 control and 164 T2DM subjects. The association of anthropometric and social demographic factors and major risk factors in T2DM with ABCA1 polymorphism among Malaysian subjects was investigated.

Table 2. Genotypic and allelic frequencies of R1587K polymorphism among subjects.

However, in other populations, did not work on the association of this polymorphism with T2DM; in current study, there was no significant difference between genotypes and alleles of R1587K polymorphism among T2DM and control subjects [10].

The present study could not show a significant genetic association for R1587K polymorphism of ABCA1 gene among Malaysian Malay T2DM patients compared to control subjects. Replication studies with larger number of samples on a homogenous study population are strongly recommended to confirm the association of ABCA1 gene polymorphisms with T2DM.

The author(s) declare that they have no competing interests.

Polin Haghvirdizadeh conceived the study and participated in the experimental design, data acquisition and analysis, interpretation of results, and drafted the manuscript. Polin Haghvirdizadeh, Ali Etemad, Vasudevan Ramachandran and Patimah Ismail interpreted the results and critically reviewed the study for important intellectual content. All authors approved the final version of the manuscript.

The authors would like to extend their gratitude to all the volunteers who involved in this study.