Background: Mutations in mitochondrial DNA (mtDNA) were the important causes of cardiovascular diseases. However, little was known regarding the role of mitochondrial tRNA (mt-tRNA) mutations in acute Myocardial Infarction (AMI).

Objective: To investigate the association between mt-tRNA mutations and AMI in Han Chinese population.

Methods: 100 unrelated AMI patients and 50 control subjects were recruited in this study; we performed PCR-RFLP to amplify 22 mt-tRNA genes and subsequently sequenced the PCR products. In addition, the pathogenicity scoring system was used to evaluate the deleterious roles of these mt-tRNA mutations. We also used real-time PCR method to determine the mtDNA content in AMI patients carrying these tRNA mutations.

Results: 4 tRNA mutations were identified by PCR-Sanger sequencing; these mutations included tRNAIle A4295G, tRNAMet A4435G, tRNAAla T5655C, tRNALeu (CUN) A12308G. Notably, these mutations were localized at the highly conserved nucleotides of the corresponding tRNAs, may cause the failure in mt-tRNA metabolism. Moreover, AMI group showed a marked reduction in mitochondrial copy number when compared with the controls (P<0.05).

Conclusions: Mutations in mt-tRNA genes were the important causes of AMI, our findings provided novel insight into the pathophysiology of AMI that were manifested by mitochondrial dysfunction.

Coronary Heart Disease (CHD) is the leading cause of death in the world and accounted for 7.4 million deaths in 2012 [1]. In Europe the mortality per annum from CHD is 20% [2] and 25% in the United States [3]. Acute Myocardial Infarction (AMI), a common type of CHD, is the leading cause of morbidity and mortality worldwide [4,5], governments and patients have to carry big economic burden in both developed and developing countries from the disease itself and post-infarction heart failure in this post-drug eluting stenting era [6]. Thus, an effective and accurate diagnostic biomarker would be needed to help decrease the mortality of AMI patients.

Mitochondrion is a unique cell organelle, playing an important role in production of ATP by Oxidative Phosphorylation (OXPHOS) [7]. Mitochondrial dysfunctions caused by mtDNA mutations have been found to be associated with a large number of human diseases, such as neurodegenerative diseases, cardiovascular disorders, cancer and obesity [8]. Among these, point mutations in mitochondrial tRNA (mt-tRNA), were the most common genetic causes of CHD, recently, several mt-tRNA mutations have been reported to be associated with CHD, these mutations included tRNALeu (CUN) A12330G [9], tRNAMet and tRNAGln A4401G [10], tRNAIle A4263G [11]. However, the relationship between mt-tRNA mutations and AMI remained poorly understood.

Table 1: Primers for PCR amplification of the mt-tRNA genes.

For inter-specific analysis of those variants identified, a total of 17 mitochondrial sequences were used as described elsewhere [13]. The Conservation Index (CI) was calculated by comparing the human mtDNA variants with other 16 vertebrates. Notably, the CI ≥ 70% was regarded as having functional potential [14].

After PCR-RFLP, we selected the samples carrying tRNA mutations and 5 controls for further mtDNA content analysis. The relative mtDNA copy number was measured by a realtime PCR and corrected by simultaneous measurement of the nuclear DNA according to the method developed by Wong and Cortopassi [15]. Essentially, measurements were carried out using the Light Cycler-Fast Start DNA Master SYBR Green I kit supplied by Roche Molecular Biochemicals (Pleasanton, CA). The mtDNA content was normalized to a single copy nuclear β-globin gene. Two primers (forward: 5’- GAAGAGCCAAGGACAGGTAC-3’, reverse: 5’- CAACTTCATCCACGTTCACC-3’) complementary to the sequence of β-globin gene were used to amplify a 268-bp product. To amplify the mitochondrial genome, (forward: 5’- AACATACCCATGGCCAACCT-3’ and the reverse: 5’- AGCGAAGGGTTGTAGTAGCCC-3’), which were complementary to the sequence of the mitochondrial ND1 gene, were used to amplify a 153-bp PCR product. We first generated standard curves for both fragments and calculated their respective amplification efficiencies to test if using the 2- CT method was appropriate. All samples were assayed in duplicate.

The pathogenicity classification of these identified mt-tRNA mutations were assigned using an updating version of a previous validated scoring system [16]. This pathogenicity scoring system employed a number of weighted criteria covering a range of molecular and genetic data, from which an overall pathogenicity score can be obtained. In particular, a variant was classified as “definitely pathogenic” with a score≥ 11 points, whereas a variant was defined as “possible pathogenic” with a core of 7 to 10 points and a “neutral polymorphism” with a score of ≤ 6 points. 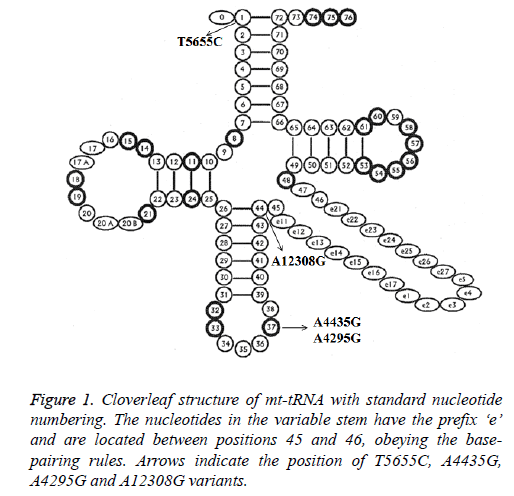 Figure 1: Cloverleaf structure of mt-tRNA with standard nucleotide numbering. The nucleotides in the variable stem have the prefix ‘e’ and are located between positions 45 and 46, obeying the base-pairing rules. Arrows indicate the position of T5655C, A4435G, A4295G and A12308G variants.

Table 3: The pathogenicity scoring system for the mt-tRNA variants. 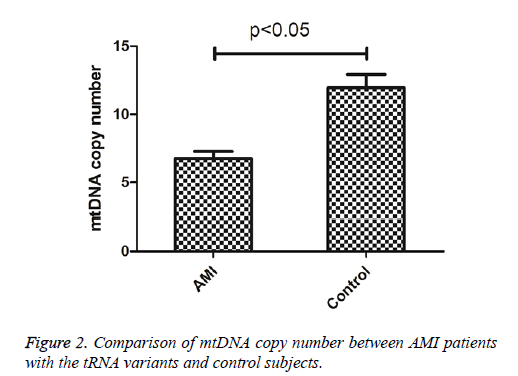 Figure 2: Comparison of mtDNA copy number between AMI patients with the tRNA variants and control subjects.

In the present study, we investigated the possible roles of mttRNA mutations in patients with AMI. To the best of our knowledge, this is the first report regarding the association between mt-tRNA mutations and AMI. Recently, increasing evidence showed that mitochondrial dysfunction played important roles in the pathogenesis of cardiovascular diseases [17]. Dysfunction of mitochondrial activity was frequently associated with cardiovascular disease such as heart failure [18]. Today, approximately 200 pathogenic mutations had been mapped to mt-tRNA genes [19], emphasizing the importance of mt-tRNAs for mitochondrial function.

In the current study, we identified 4 mt-tRNA mutations using PCR-Sanger sequencing. Among these, the A4295G and A4435G mutations were localized at 3’end adjacent to the anticodon (position 37) of tRNAIle and tRNAMet, respectively [20]. The adenine at this position of tRNAs was extraordinarily conserved from bacteria to human mitochondria [20]. Almost all of A37 in tRNAs were modified, thus, contributed to the high fidelity of codon recognition, the structural formation and stabilization of functional tRNAs [21]. Notably, the homoplasmic A4295G mutation reduced the efficiency with which tRNAIle can be processed by 3’-tRNase, decreased the level of tRNAIle, thereby led to the defects in mitochondrial translation [22]. Moreover, the A4435G mutation had been reported to increase the penetrance and expressivity of Leber’s Hereditary Optic Neuropathy (LHON)-associated ND4 G11778A mutation in a Han Chinese family [23], approximately~50% reduction in the steady-state level of tRNAMet was observed in the cell lines derived from the individuals carrying the A4435G mutation [23]. While the T5655C mutation in tRNAAla gene was first described in an African family with non-syndromic hearing impairment [24], this mutation disrupted the highly conserved base pairing (A1- U72) at the acceptor arm of tRNAAla, a ~41% reduction in the steady-state level of tRNAAla in mutant cybrids was found, in addition, marked decreases in the level of mitochondrial ATP and membrane potential were also observed in mutant cells with the T5655C mutation [25]. Furthermore, the A12308G mutation had been regarded as a synergistic effect with the mtDNA T12297C mutation associated with dilated cardiomyopathy [26]. Previous study showed that patients with this mutation had a higher relative risk of developing pigmentary retinopathy, short stature, dysphasia-dysarthria and cardiac conduction defects [27], suggesting that this mutation was involved in the development of AMI.

Based on these observations, we proposed that the possible molecular mechanism underlying mt-tRNA mutations in the pathogenesis of AMI may be as follows; first of all, mutations disrupted the secondary structure of mt-tRNA and subsequently resulted the failure in tRNA metabolism such as aminoacylation and post-transcriptional modification [29]. Whatever the consequence may be, the expected net effect would be a decrease in mitochondrial protein synthesis. Defects in mitochondrial translation consequently led to a respiratory phenotype and a decline in ATP production below the threshold level required for normal cell function, thereby causing the mitochondrial dysfunction and longstanding increase of ROS in cardiovascular cells. Thus, our findings provided novel insight into the understanding of pathophysiology and valuable information for management and treatment of AMI.