All other segregation modes (adjacent-1, adjacent-2, 3:0) produce unbalanced gametes with disomies and nullisomies of chromosomes involved in Rob translocations. It is well known that meiotic tetravalent configuration tends to segregate in alternate way [4], resulting in preferential production of normal/balanced spermatozoa. However, certain percentages of unbalanced gametes derived from adjacent segregation are also produced, leading to the increased risk of miscarriage and pregnancy with livebirth of chromosomally unbalanced fetus.

More recently, interchromosomal effects (ICE) have been described for several chromosome pairs in Rob translocations. The interchromosomal effect (ICE) refers to a disturbance of meiosis where rearranged chromosomes disrupt disjunction and distribution of chromosome pairs not involved in the rearrangement. This effect was first postulated by Lejeune [11], who noticed an excess of carriers of balanced reciprocal translocations among the fathers of children with Down syndrome. Contradictory data have been reported on the analysis of spermatozoa. Several studies have found such an ICE in male carriers of Rob translocations [12,13], but others did not [14,15].

In this study, we report results of chromosome segregation studies in sperm of a Rob translocation family.

This case report was occasioned by the ascertainment of a 25-year-old Chinese man (IV-1) married to a nonconsanguineous woman with normal chromosomes (IV-2).

This couple had a son who died at the age of 6 months, buried without an autopsy, but had a chromosome study because of cerebral palsy. The karyotyping analysis of IV-1 was authenticated by the Chinese Academic Committee of the state key laboratory of medical genetics with previously undescribed balanced human karyotype 44XY, der(14;15)(q10;q10), der(14;15)(q10;q10) (see Figure 2.).

The parents of the propositus are phenotypically normal first consins, each a carrier of the same Rob translocation (?-1, ?-2). Their parents, a mutual uncle, and both grandparents are deceased, thus it is not possible to determine whether I-1 or I-2 was the carrier of the translocation (Figure 1). 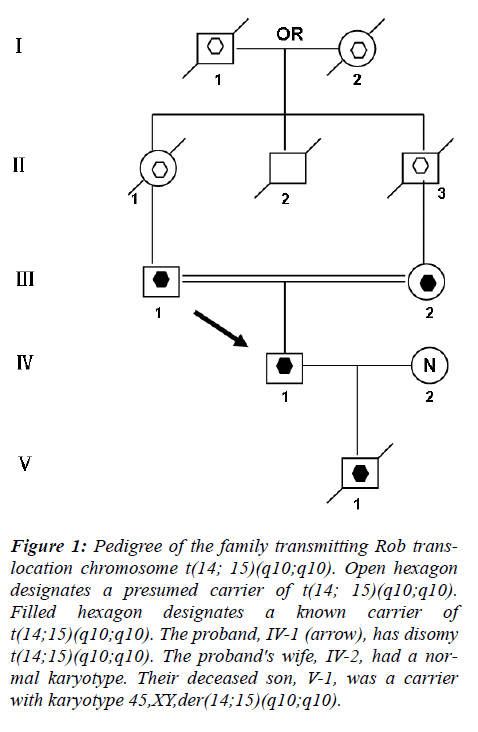 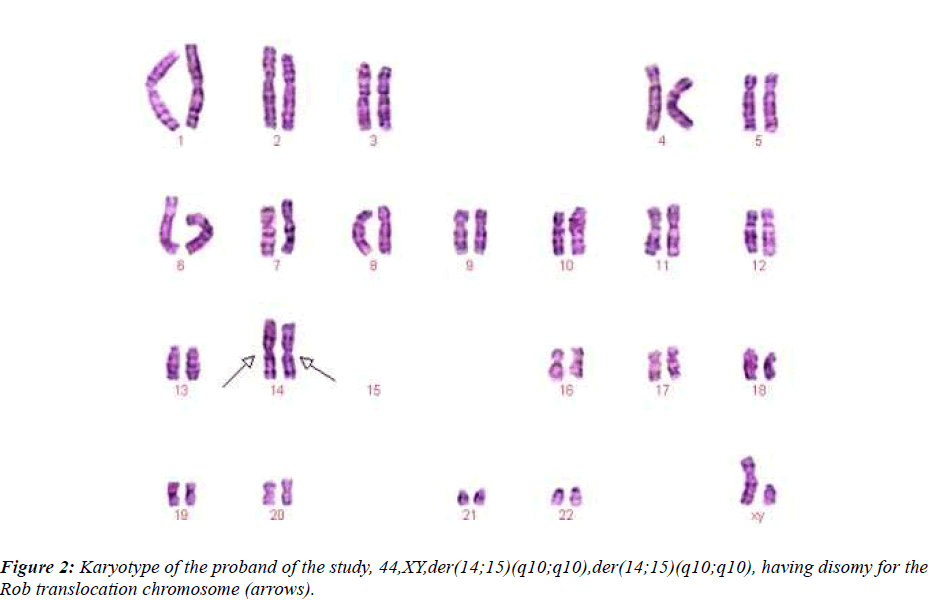 All semen samples were first analyzed to evaluate volume, concentration and motility (Table. 1.), according to the World Health Organization criteria [16]. After semen analysis, sperm with progressive motility was isolated and washed twice in phosphate buffered saline (pH 7.4) by centrifugation at 1500 rpm for 11 min. Final pellets were fixed with 5 ml of acetic acid/methanol mixture (1:3) for at least 30 min at 4 °C. Aliquots (40–50μl) of the resulting suspension of nuclei were smeared on cold pre-cleaned slides. Nuclei decondensation was performed in 1 N NaOH for 2 min. After dehydration in ethanol series (70 %, 90 %, 100 %), denaturation was performed in 0.25 % formamide in 2xSSC followed by overnight hybridization with a combination of commercially available probes.

Table 1: Cytogenetic and spermiologic results of IV-1 and -1

Post-hybridization washes included 2 min in 0.4xSSC/ 0.3%NP-40 (pH=7) at 72 °C, followed by 1 min in 2xSSC/ 0.1%NP-40 (pH=7) at room temperature. Slides were covered with DAPI II (Vysis). Only intact spermatozoa bearing a similar degree of decondensation and clear hybridization signals were scored; disrupted or overlapping spermatozoa were excluded from analysis. Only slides with hybridization efficiency of 99% and more were analyzed. 1,000 sperm nuclei per patient were analyzed.

Chi-squared test was used to compare frequencies of segregation products. A probability value of less than 0.05 was considered to be statistically significant.

A total of 4,000 sperm nuclei from the two translocation carriers were analyzed for this study. The results of the segregation analysis are detailed in Table 2 and Table 3. 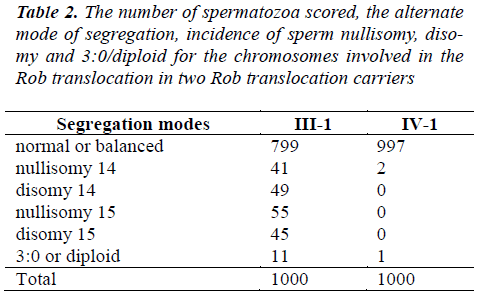 Table 2: The number of spermatozoa scored, the alternate mode of segregation, incidence of sperm nullisomy, disomy and 3:0/diploid for the chromosomes involved in the Rob translocation in two Rob translocation carriers

Table 2: The number of spermatozoa scored, the alternate mode of segregation, incidence of sperm nullisomy, disomy and 3:0/diploid for the chromosomes involved in the Rob translocation in two Rob translocation carriers 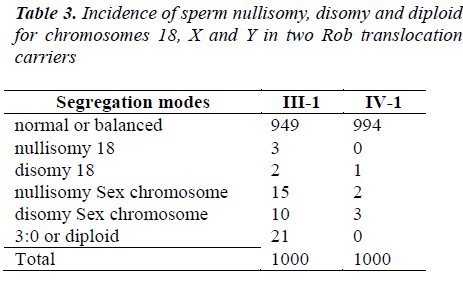 The nullisomy, disomy and diploid rates for chromosomes 18, X and Y in ?-1 and IV-1 are summarized in Table 3. In ?-1, the higher frequencies of aneuploidy for sex chromosome were observed. In addition, the increased rates of diploid were found. The incidence of spermatozoa with nullisomy?disomy and diploid for the sex chromosomes of ?-1 was significantly higher compared to that of IV-1 (P<0.05). But, compared IV-1 with controls, the incidence was not significant [17-21].

Fusion of human spermatozoa with zona-free hamster egg has been the only available method for the study of structural chromosomal aberrations in human sperm until the occurrence of FISH [22]. Multicolor FISH on decondensed sperm nuclei allows for a rapid analysis (less than 1 hour) of meiotic segregation in sperm of translocation carriers, providing information on the exact amount of normal/balanced sperm.

Variability in frequencies of unbalanced sperm in different studies can be related to technical aspects, such as FISH protocols, probes or scoring criteria used [25].

ICE first described by Lejeune [11], but the hypothesis of an ICE associated with carriers of Rob translocations has always been a controversial issue [26]. Some reports supported the possibility of ICE in Rob translocations [12,13]. However, others demonstrated no evidence of this phenomenon [9,18].

The interchromosomal effect could be explained by the formation of heterosynapses between chromosomes involved in the translocation and the sex vesicle, which could also involve other chromosomes [11,26].

The propositus (IV-1) is healthy and has a balanced chromosomal complement. Assessment of a semen sample from the propositus (IV-1) showed normal sperm number and morphology. Given his karyotype of 44,XY,der(14;15)(q10;q10),der(14;15)(q10;q10), we assumed that the person’s sperm karyotype to be consistently 22,X ,der(14;15)and 22,Y,der(14;15), then, our assumption was proved by this research. From Table 2 and 3, we can see most of sperms of IV-1 are balanced haploid (not normal haploid). From Figure 3, we can see a sperm (with arrow) has four fluorescence signals (two red and two green). This means the sperm has two derivative chromosomes of der(14;15), but we can not tell the sperm is disomy of derivative chromosome or diploid. In our future research, we will employ tripl-color FISH (for example: the probe mixture consist of chromosomes 14?15 and 18) for the detection of normal/balanced or unbalanced sperm to distinguish between disomy and diploid. 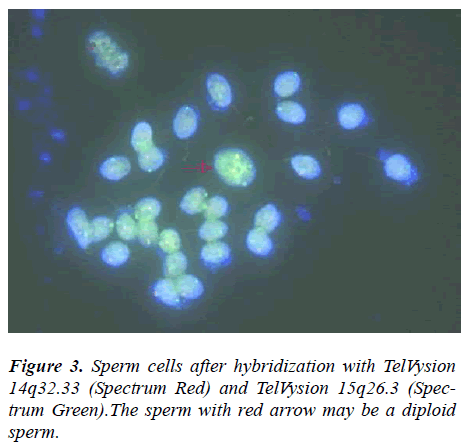 Rob rearrangements are common chromosomal changes that can lead to rapid and efficient reproductive isolation between karyotypically similar populations, especially when many rob metacentric chromosomes display monobrachial homologies [27]. In the case of Muntjac, little or no measurable genetic or morphological differences have been found [28].

Homozygosity for Rob translocations in man has been described before. A fetus with two t(14;21) chromosomes was found by Dallapiccola et al. [29]. The related parents were heterozygous for the same translocation. Martinez et al. [30] described three adult sibs homozygous for t(13;14). Their parents were first-cousins and both were heterozygous carriers. Rajangam et al. [31] found a unique DS karyotype 45, XY, der(14;21)pat, der(14;21)- mat, +21mat. Whereas translocation heterozygosity is associated with meiotic disturbances that cause infertility and subfecundity. Translocation homozygosity should not have any effect on meiosis, at least in theory [30].

Taking into consideration relatively high levels of unbalanced sperm and unbalanced embryos, PGD is justified for Rob translocation carriers to reduce the risk of miscarriage and to increase the chances of pregnancy achievement [32-35].

Since the propositus is phenotypically normal with normal fertility, we consider the chromosomal rearrangement of the person to be a balanced polymorphism [36].The aberration can provide material for evolution. The establishment of a new human subspecies with a diploid complement of 44 chromosomes could occur if a small population with the karyotype of the propositus undergoes long-term reproductive isolation [37].

We thank Barry Starr and John M. Opitz for their help. This work was supported by a grant 81102141 from National Science Foundation of China