Data classification is a vital task in the field of data mining and analytics. In the recent years, big data has become an emerging field of research and it has wide range of research opportunities. This paper represents three unsupervised and novel neural network techniques: Two-phase neural network (TPNN), stack of TPNN (sTPNN), and ensemble of TPNN (eTPNN) for classification of liver and disbetes data. In this study, Diabetes and Liver data are analyzed by using proposed techniques. Bench mark data sets of liver disorder and diabetes patients records are taken from UCI repository and processed by artificial neural networks towards classification of existence of disease. They are also used for the evaluation of proposed techniques. Performance analysis of three neural classification techniques is done by using metrics such as accuracy, precision, recall and F-measure. sTPNN and eTPNN are found better in overall performance in classifying the disease.

Hong-Liang [3] has classified the imbalanced protein data by using ensemble classifier technique EnFTM-SVM. This is an ensemble of fuzzy total margin support vector machine (FTNSVM). It is a three stage framework. In the first stage, protein feature extraction and representation is made. In the second stage, large numbers of distinct data sets are created. Protein sequences have multiple classes to classify and receiver operating characteristic curve is used to evaluate the classification model. Kumar et al. [4] have introduced a modified technique for the recognition of single stage and multiple power quality disturbances. They have proposed an algorithm which combines S-Transform based artificial neural network classifier and rule based decision tree. Different types of disturbances to the power quality are classified based on IEEE-1159 standard. To classify power quality events, twolayered feed forward neural network with sigmoid function is used. Scaled conjugate gradient back propagation algorithm is used for network training. After thorough investigation, this proposed algorithm is implemented in real time events and the validity is confirmed.

Wu et al. [5] have proposed a hybrid constructive algorithm for single layer feed forward networks learning (SLFN) which is widely used for classification and regression problems. The SLFN learning has two tasks; determining the network size and training the parameters. The proposed hybrid constructive algorithm can train all the parameters and determine the size of the network simultaneously. In the beginning stage, they have applied the proposed hybrid algorithm which combined Levenberg-Marquardt algorithm and least square method to train the SLFN with fixed network size. Later, they have applied the proposed hybrid constructive algorithm which follows incremental constructive scheme. In this proposed method a new neuron is randomly initialized and added with the network when the training entrapped into local minima problem. Training is continued on previous results with the added new neurons. This hybrid constructive algorithm starts the training with no hidden neurons and increases the hidden neurons one by one every time. The performance and efficiency of this novel algorithm is proved through experiments. Dong et al. [6] have implemented a novel method for vehicle type classification by using semi-supervised convolutional neural network. Sparse Laplacian filter learning is introduced for network training in the convolutional layer and it is an unsupervised method. Beijing Institute of Technology vehicle data set which includes 9850 frontal view images of vehicle is used for the experiments. The neural network classifies the images based on vehicle types such as bus, minivan, truck etc

Three neural network techniques are proposed in this paper. The first one is constructed as basic technique and other two are variants of the first one.

A two-phase method is proposed for data classification. In the first phase preprocessed data set is processed by a selforganizing map to find the data clusters and the output vectors are sent to the second phase for effective classification. The working model is represented in Figure 1. Self-organizing map is invented by Kohonen [7] and it is used as a clustering tool and its efficiency is proved by various researchers. It contains two layers namely input layer and output layer. The variable ‘n’ denotes the number of neurons in input layer and ‘m’ denotes number of neurons in output layer. The clustering process takes place in the output layer by identifying the winner neuron. The winner neuron is identified by recursively calculating the Euclidean distance to measure the similarity. Since self-organizing map is an unsupervised method, learning takes place at output layer itself and prior training is not required. 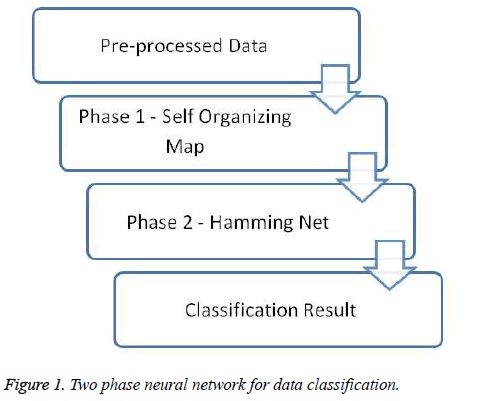 In the second phase the Hamming net will process the cluster results of previous phase. Hamming net is an unsupervised neural network method invented by Lippmann [8] and it is an effective classifier. Here the target is improving the classification efficiency of hamming net through selforganizing map. It finds the exemplar vector by calculating Hamming distance among input vectors and it is determined by number of components in which the vectors differ. In this technique variables b, n, m represent bias value, number of neurons in input layer and number of neurons in output layer respectively. Calculation of Hamming distance is done at first layer. The second layer decides the winner vector which has minimum Hamming distance through a Maxnet as a subnet. Maxnet was developed by Lippmann and it is a subnet which has been constructed by using fixed neural nodes and used to classify the values when large input is given.

Step 2. Calculate the square of Euclidean distance for each input vector.

Step 3. Find the final unit index J, so that D(J) is minimum.

Step 4. Update weights for all j.

Step 5. Repeat step 3 and step 4 up to finding the exemplar and stop. 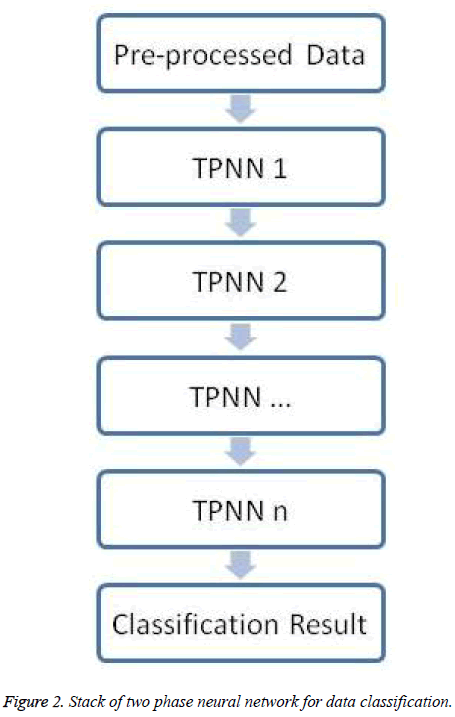 An ensemble of two phase neural networks is constructed to enhance the performance of TPNN. An ensemble is a collection of same or different kind of techniques which is developed to improve the overall performance. In an ensemble, a dataset will be processed by all the members of ensemble and the result of all techniques will be summarized as shown in Figure 3. 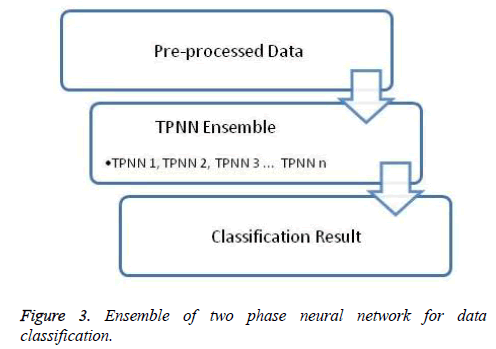 All the three neural network techniques have two neural layers basically. They are implemented and tested with three combinations based on number of neurons in input layer and processing layer such as 8-18, 8-20, and 8-22. Based on the previous research and results [9], number of neurons of input layer is fixed as eight and number of neurons of processing layer is fixed as eighteen, twenty and twenty two. The stack of TPNN technique has been implemented and tested by three stacks based on the repetition of TPNN in the particular stack. In the first, the second and the third stacks, TPNN is repeated for three, five and seven times respectively. The same approach is followed in the construction of ensembles too. Three ensembles have been implemented and tested which has three, five and seven TPNNs respectively. All the techniques are tested with Irvine benchmark data sets of University of California and detailed description of datasets are given in Table 1.

The classification performance of the techniques is measured by the values of accuracy (A), precision (P), recall (R) and Fmeasure (F) based on classified values as follows.

Three unsupervised neural network techniques Two-phase neural network (TPNN), stack of TPNN (sTPNN), and ensemble of TPNN (eTPNN) are proposed in this paper for classification of Liver disorder and for classification distebetes problem. BUPA liver and diabetes data sets from UCI repository are used for this study. Australian credit approval data set is also processed and analysed by the proposed techniques for validation. Performance analysis of three neural network based classification techniques are done by using metrics such as accuracy, precision, recall and F-measure. In terms of accuracy, sTPNN and eTPNN perform well. sTPNN performs well in terms of recall, precision, and F-measure. Among the three techniques, sTPNN and eTPNN are found better in overall performance even though only slight variations found in the performance of three techniques. The sTPNN and eTPNN techniques produce better results on diabetes and liver datasets. They have classified the disorder of liver more accurately than other techniques and also diabetes records also classified properly by the same techniques. It is concluded that architectural changes such as increment & decrement of neurons in a layer, merging of different networks, ensemble learning will improve the disease classification performance of neural network techniques. In this study classification accuracy is improved by using stack and ensemble architectures of artificial neural networks. There are scope for applying other soft computing techniques such as fuzzy logic, genetic algorithms, and hybrid techniques such as neuro-fuzzy, genetic-neuro, genetic-fuzzy for improving the performance of classifiers on medical datas.