Objective: The study reported here reviews the national trends of available procedures for inhospital treatment of lung cancer. Method: In this study the National Inpatient Sample (NIS) database from the year 2003 to 2011 was used and which has information about patients hospitalized with a principal diagnosis and with the principal procedure among other critical hospitalization related variables. The relevant data was extracted from NIS using the principal diagnosis ICD 9 code for lung cancer. The lung cancer procedures were classified into three categories (based on ICD 9 procedural code) as “Surgical”, “Non-surgical” and “Others”. Results: Overall it was found that 15,774 lung cancer patients were admitted to the hospital during the years 2003 to 2011. The percentage of “Non- Surgical” procedures and “Others” categories remained consistently lower (1.2%), whereas Surgical procedure increased by (6% to 8%) over the same period of time. Demographic factors of Age, Race, Gender and hospitalization outcomes of Length of stay in the hospital, Total charges, as also Type of admission to the hospital and Insurance Types were used alongside the review of the national trends to determine any significant association in the selection of treatment options for lung cancer. Total charges increased for all procedures over the period 2003 to 2011 (P-value<0.0001) while Length of stay reduced only for open surgery (P-value<0.0001). Gender, admission type and risk of mortality were found to play important roles in the selection of the treatment.

Lung cancer is a disease of abnormal growth of the cell in the lung, which can easily travel to other organs of the body and become deadly [1]. It is a most common reason of death in the United States [2]. Primary lung cancer develops in the lungs and metastasizes to the lungs, lymph nodes, bone, brain, liver, and adrenal glands. Secondary lung cancer travels from another part of the body or metastasized to the lungs. Most common primary locations are the colon, kidney, breast, skin, eye, and prostate [3].

There are multiple treatment options have become available for lung cancer patients over the last two decades. New surgical treatment like video-assisted thoracic surgery has shown good results in early recovery and reducing pain [4]. Moreover, advancement in the radiotherapy and targeted molecular therapy have shown good results not only in elderly but also in young patients and improved outcomes in lung cancer patients [5]. Lung cancer is primarily an old age disease, and the incidence of lung cancer significantly increases with age [6-8]. It commonly identified among people above the age 60. In addition to age, there are lots of other factors which play a significant role in the selection of the right treatments. Old age patients may have more comorbidities and so have limited options for the procedures [9-11]. During the last decade, lung cancer mortality has declined due to early diagnosis and treatment advancements [12,13]. However, it is difficult to predict the outcome for secondary lung cancer; it depends on the origin of the primary tumor and its malignancy treatment. Secondary lung cancer can be completely removed with surgery, if the primary site is kidney, bladder, colon or any soft tissue [3]. This report utilized the Health Cost Utilization Project’s (HCUP’s) Nationwide Inpatient Sample (NIS) database, to get a better quantitative idea of the trends in treatment procedures especially about hospitalized secondary lung cancer patients.

HCUP family of databases consisting of ambulatory care, acute care and emergency department patient stays (among others) is the creation of a Federal-State-Industry Partnership with AHRQ. The NIS database is part of the HCUP and contains data from 8 million hospital stays each year and shows 20% stratified samples of United States hospitals. This study utilized the NIS data from 2003 to 2011 primarily for the review of trends in lung cancer (both malignant and benign) treatments as also other hospitalization outcomes such as Length of Stay and Total Charges [14].

Patient discharges were selected based on principal diagnosis code (ICD 9 code of '197.0'). The set of principal procedures of those patients classified into three categories (open surgery or Open procedure, Non-surgical procedures, and others). The Open procedure represents wedge resection, segmental resection, lobectomy, and pneumonectomy. The Non-surgical procedure represents chemotherapy, radiation and injecting of the therapeutic substance. The Other procedure represents invasive mechanical ventilation, insertion of the vascular device, photodynamic therapy, encounter therapeutic and hospice, etc. Figures 1 and 2 below shows the extraction process with numbers obtained for the procedures from the total number of discharges. 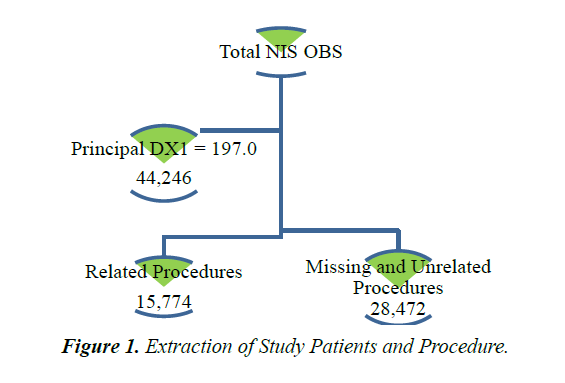 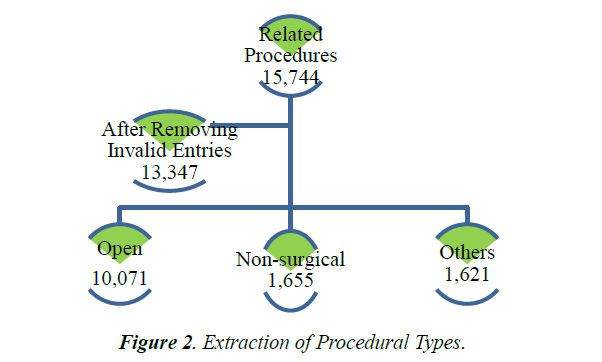 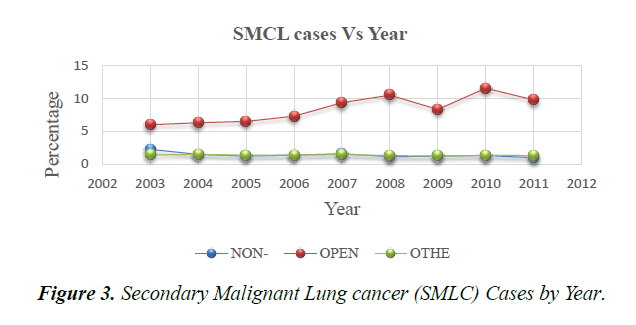 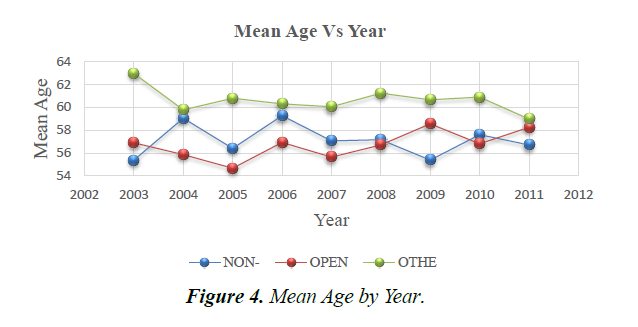 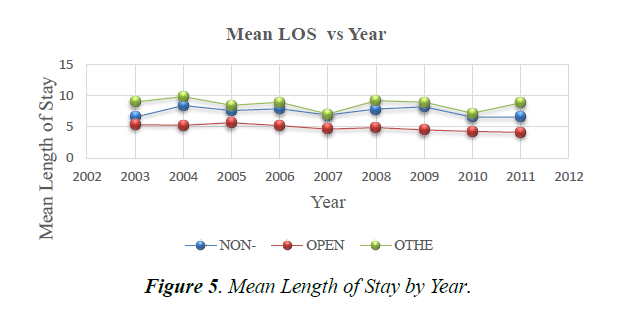 Among all kind of procedures, Open surgery is the most efficient procedure for lung cancer patient regarding removing the tumor from the affected the area of the lung. The type of treatment a patient receives depends on age, type of tumor, stage of cancer and the medical history of the patient. Research has already shown that survival rate after surgery is five years for a lung cancer patient [15].

The increase in open surgery volume throughout 2003 to 2011 indicates the advances in the multi scientific areas of imaging, epidemiology and molecular pathology which has impacted not only the treatment but also the early detection and prevention of lung cancer [16,17]. Risk of mortality plays an essential role in selection of the treatment. Open procedure is not an option when cancer diagnosed at the last stage or tumor is too large. The results show that the majorities of patients undergoing open surgery are having only a minor severity level and those with extreme severity go for non-operative or other procedure options.

Age is an important deciding factor for lung cancer treatment. Surgery is more suitable to young age less than 70. Table 3 shows that the mean age for open surgery is lower and remains constant for nine years (Figure 4), also indicates that operation is more useful for early age of patients. Old age patients may have a more coexisting medical condition or conditions, which will make them unsuitable candidates for open surgery [6-11].

In general, the risk of developing lung cancer is higher in women than men. However, they both share the same risk factors [17,18]. Table 3 shows more females are suffering from lung cancer than males, but more men are undergoing Open surgery procedures than women. There are many deciding factors involved in the choice of the right treatment. It could be possible that due to genetic differences, lung cancer symptoms are more prominent and detectable earlier in males than females at an early age. Research has also shown that secondary lung cancer produces more symptoms in men than women and thus is easy to detect in the first stage of lung cancer while it spreads quickly in the women [6,18-20]. But this result is unclear in this work and further research is required. Table 3 also shows that the overall incidence and treatment rate in each category is significantly higher in Whites as opposed to other ethnicities. Also, the majority of patients undergoing Other procedure are having Medicare insurance while those patients undergoing Open and Non-operative procedures are having private insurance. It may be because Medicare is more likely for older age people. Table 3 also shows that the mean age for Other procedure is higher than Open and Non-operative procedures.

The increasing trend of total charge may not due to the specific procedure employed but may be due to the overall economy. Because hospitals need to battle with other purchasers, labor, goods, and services they don’t have full control over the economy [21].

It is a retrospective study and so limited to data availability while a prospective study would be more helpful in yielding desired associations and test predictions based on retrospective analysis. The data is only for inpatient discharges and doesn’t include ambulatory and emergency department discharges which might generate more comprehensive information about the nature of lung cancer patients and their treatments. These data represents a portion of the annual procedures, but the data do estimate the trends.

In the inpatient domain, Open procedures (specifically wedge resection) more often performed than other two types of procedures. Total charges increased for all procedures and length of stay reduced for open surgery over the period. Gender, admission type and risk of mortality are seen to play a significant role in the selection of the treatment. 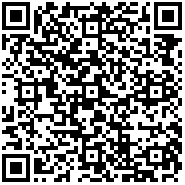