Analysis of bacterial diversity in healing and non-healing wounds among Malaysian subjects by phenotypic identification and 16S rDNA sequencing.

Wound healing is a complex sequence of events consisting of regeneration and repair. It has been proposed that bacteria present in wounds play a major role in delayed wound healing. The main objectives of this study are to identify the bacterial species present in wounds and to evaluate and compare the results obtained using conventional biochemical analysis and 16S rDNA sequencing. Wound swabs from 15 healing and 15 non-healing wounds were collected from the wound clinic in University Malaya Medical Centre, Malaysia. The wound microbiotas obtained by bacterial culture methods followed by biochemical tests and 16S rDNA sequencing were compared. Culture analysis and 16S rDNA sequencing both revealed that the most prevalent bacteria in wounds are Staphylococcus spp. and Pseudomons spp. The prevalence of Staphylococcus aureus was significantly higher in non-healing wounds than healing wounds (p=0.003). API® biochemical tests successfully identified all 54 isolates at species level. However, by 16S rDNA sequencing only 19 (35.2%) isolates were identified at species level and 35 (64.8%) were identified at the genus or family level. 16S rDNA sequencing however provided a better view on the phylogenetic relationships of bacterial species present in wounds.

Intact skin plays a major role in controlling microbiota on the skin surface and prevents underlying tissue from being colonised and invaded by potential pathogens. External damage to the intact skin through wounding provides a favourable environment for microbial colonisation and proliferation [1]. Wound healing is a complex process characterised by three consecutive and overlapping stages: inflammation, proliferation and remodelling [2]. Wound healing begins with platelet aggregation that promotes haemostasis. This is followed by an inflammatory cell cascade involving neutrophils, macrophages and lymphocytes within the tissue and lastly closure of wound via proliferation of fibroblasts and remodelling of extracellular matrix by crosslinking of collagen and scar maturation [3,4]. Proper circulation, nutrition, immune state and avoidance of negative mechanical forces are necessary for normal wound healing. Alteration in any of these will lead to a delay in wound healing [5].

There are two types of wounds: acute and chronic. Acute wounds are caused by external trauma such as surgical wounds, bites, burns, minor cuts, abrasions, crushing and gun shoot injuries [1]. Acute wounds usually heal in a very orderly and efficient manner within a predictable time frame that leads to recovery of anatomical and functional integrity [3,6]. Chronic wounds, however do not heal in a predictable period and are biologically defined by prolonged inflammation, defective re-epithelisation and impaired matrix remodelling [7]. These wounds are mostly caused by endogenous mechanisms associated with predisposing conditions such as venous disease, diabetes mellitus, central nervous system compromise, trauma, inflammatory illnesses, metabolic abnormalities, coagulopathies, immunosuppression, obesity, smoking and malnutrition [8]. The presence of non-replicating microorganisms in a wound may be considered as contamination [9]. Contaminating microorganisms arise from three main sources: the external environment (air or those introduced by traumatic injury), the surrounding skin (normal skin microfloras including Staphylococcus epidermidis, Micrococci) and endogenous sources including the gastrointestinal, vaginal and oral tracts [1]. Contamination might proceed to colonisation then local infection and ultimately cause systemic disease such as cellulitis, septicaemia or endocarditis [7,10]. Complications of infection maybe caused directly (bacteria patho genicity) or indirectly (mediated by the immune response in an attempt to eradicate the invading microorganisms) [4].

In this study, we prospectively enrolled 15 patients with healing wounds and 15 patients with non-healing wounds from the Wound Clinic, UMMC. The prevalence of bacterial species in the wounds was determined. Two sets of 16S rDNA primers, PL06 and DG74 were evaluated for their ability to identify bacteria from wound. Identity was compared with that obtained by biochemical tests.

Sample Collection and Isolation of Bacteria

Wound swabs of 15 healing wounds and 15 non-healing wounds were collected from subjects attending the Wound Clinic in University Malaya Medical Centre through a study approved by the Ethic Committee of UMMC (Ethics Number: 962.13). Using sterile technique, a cotton swab was rotated over the wound for 5 seconds and the tip of the swab was then broken into a sterile transport tube containing 3ml of Phosphate Buffered Saline. 100μl of each sample was spread on Mac- Conkey agar and Phenylethyl Alcohol Sheep Blood Agar. The plates were then incubated aerobically and anaerobically at 37ºC for 4 days. Pure cultures were obtained after several plates were streaked with single colony.

DNA was extracted from pure bacterial colonies using igenomic DNA extraction kit (iNTRON Biotechnology, Korea). A single colony was picked up from the agar plate and re-suspended into 1.5ml Phosphate Buffered Saline. Bacteria were pelleted by centrifugation at 11337xg for 1min and suspended in 100μl of Buffer MP and 3μl of lysozyme solution. The extraction was performed according to the manufacturer’s instruction. Universal primers for 16S rDNA (PL06: 5’- GGT TAA GTC CCG CAA CGA GCG C -3’ and DG74: 5’- AGG AGG TGA TCC AAC CGC A -3’) were used for PCR amplification. The reaction was carried out in 25μl containing 12.5μl of 2X PCR master mix (Promega, USA), 2.5μl of each primer (10μM), DNA template (1ng) and nuclease free water. PCR conditions were: initial denaturation at 95ºC for 5 min, 30 cycles of denaturation at 95ºC for 1 min, annealing at 55ºC for 1 min, extension at 72ºC for 1 min and final extension at 72ºC for 10 min. Amplification was performed on a Eppendorf Mastercycler Personal (Eppendorf, Germany).16S rDNA sequencing was performed on a ABI 3730XL (First Base Sdn Bhd, Malaysia). The obtained sequences were analysed by using Megablast®. The resulting 16S rDNA sequences of approximately 460 bases were compared with the sequences in National Centre for Biotechnology Information (NCBI) using the BLAST® program. Bacterial were identified on the basis of at least 98% similarity to 16S rDNA sequences in the database 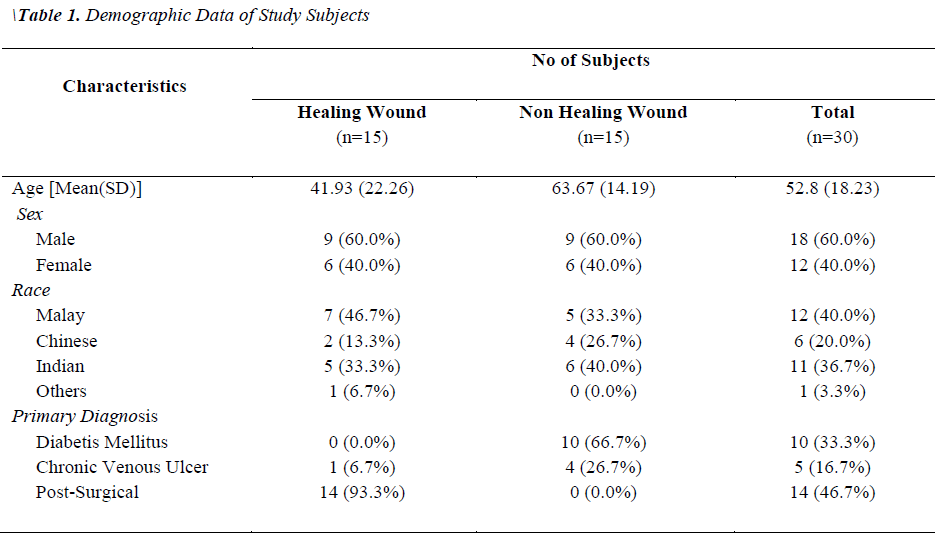 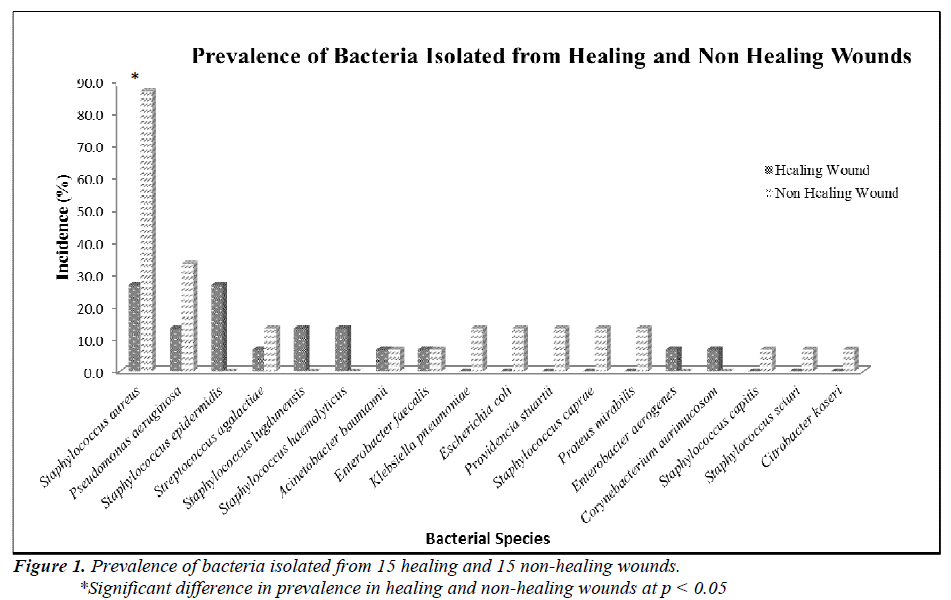 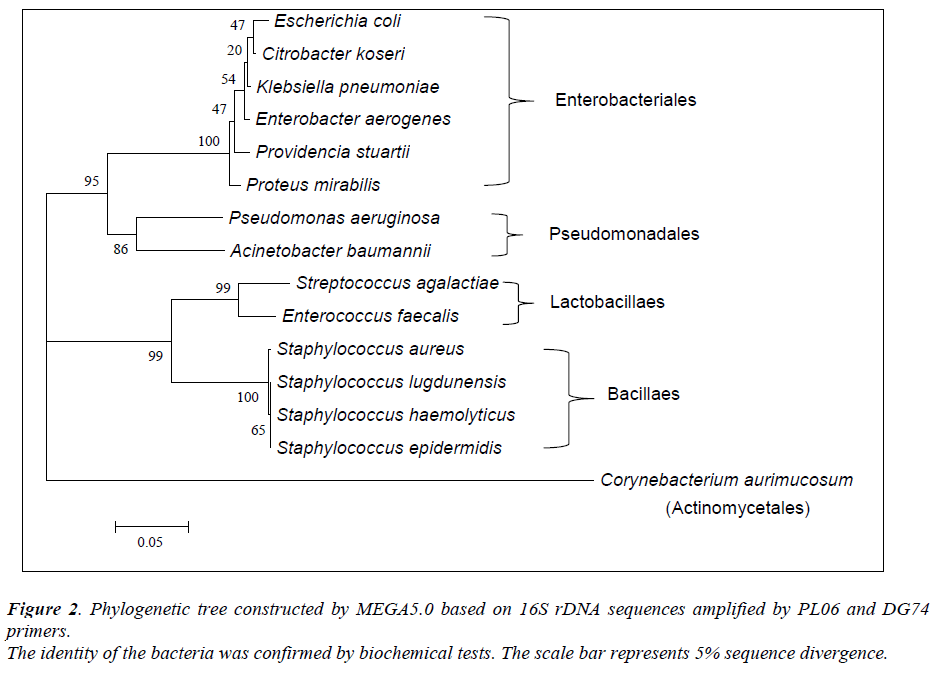 Figure 2: Phylogenetic tree constructed by MEGA5.0 based on 16S rDNA sequences amplified by PL06 and DG74 primers.
The identity of the bacteria was confirmed by biochemical tests. The scale bar represents 5% sequence divergence.. 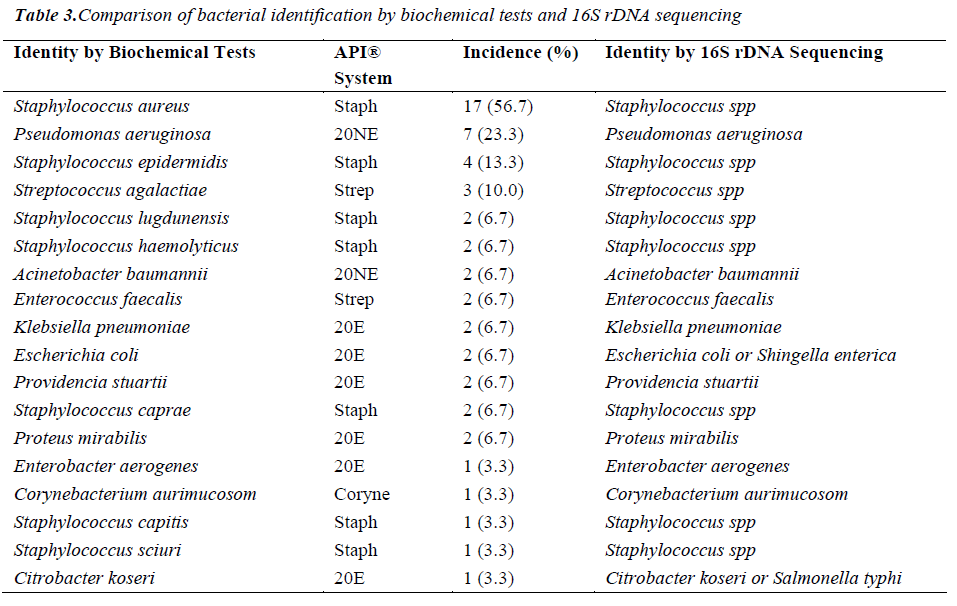 Our findings show that the mean age of the non-healers was significantly higher than the healers and this finding is in agreement with the previous findings [14,15]. A study by Harker [16] showed that systemic diseases such as diabetes mellitus, chronic venous ulcers and arterial ulcers which may delay wound healing are more common in elderly. Moreover, factors such as excessive inflammatory response, matrix degradation, impaired vascularization, change in energy metabolism and decreased granulation may also affect wound healing in older subjects [15,17].

Previous studies have shown that Staphylococcus aureus and Pseudomonas aeruginosa are the predominant microorganisms isolated from chronic wounds [4,7,10]. This is in agreement with results from this study in which the prevalence of Staphylococcus aureus was found significantly higher in non-healing wounds than in healing wounds. Athanasopoulos et al. [18] and Edwards et al. [19] postulated that the extracellular adherence protein (Eap) of Staphylococcus aureus played a pivotal role in impaired wound healing by impeding the inflammatory state and inhibiting angiogenesis in the proliferative state. Inflammation is an important part in wound healing and is responsible for eliminating potential pathogens [4]. However, presence of bacterial components in chronic wounds may stimulate excessive inflammatory response and chronic wounds will not heal until the excessive inflammation is reduced [3].

For decades, biochemical methods have been used as the ‘gold standard’ in identification of bacteria. To find a effective and efficient method in identification of wound bacteria, we compared and evaluated both biochemical methods and 16S rDNA sequencing. Our findings revealed that all 54 isolates were identified by the API® systems to the species level. However, only 19 isolates were identified to species level by 16S rDNA sequencing. Previous studies had reported that 16S rDNA sequencing provides genus identification in >90% of the cases and species identification in only 65-83% cases [12,20]. Indeed, the 16S primers (PL06 and DG74) that were used in this study have poor discriminative power among closely related species. For instance, Staphylococcus aureus and Staphylococcus epidermidis showed only <0.5% divergence (>99.5% similarity). Furthermore, construction of a phylogenetic tree revealed little sequence divergence between 16S rDNA sequences in them. Identification of bacteria by 16S rDNA sequencing depends on significant interspecies differences and small intraspecies differences in the 16S regions [12]. Hence, one of the limitations of 16S rDNA sequencing is inability to identify bacterial species particularly when the sequences have very high similarity score to the next closest match [21]. In conclusion, we confirmed that Staphylococcus aureus is the most prevalent bacteria in non-healing wounds of older patients. 16S rDNA sequencing provides us a better view in bacterial phylogeny and taxonomy studies even though there are some limitations in this method. Additional primers or probes are necessary to target the variable region in the 16S sequence for distinctive bacterial identification.

We gratefully acknowledge funding for the research described in this study from University Malaya IPPP grant (PG056-2012B). We thank the nurses of the UMMC Wound Clinic for their knowledge and helpfulness.