We present a rare case of three-rooted left permanent maxillary first premolar (MFP) coexisting with bilateral four-rooted permanent mandibular second molars (MSM). These variants were found incidentally on cone beam computed tomography (CBCT) images. At best of our knowledge, this is the first report presenting these rare tooth root variants in one patient. Although this condition is uncommon the radiologists and clinicians should be aware because of its importance for the successful root canal treatment, future tooth extraction, apicectomy and other procedures. This report adds a new knowledge about tooth roots variants and illustrates the possibility of their coexistence in one patient.

One of the main reasons for endodontic treatment failures is the lack of understanding or underestimation of the root canal morphology [1].

The intraoral radiographs are usually useful to see the number, length, curvature and possible variations of the roots and their canals. But the visualization of some variants like three root canals of the MFPs with preoperative radiography is not always possible [2-4].

Recently CBCT with an optimal field of view is an effective method of choice to diagnose the tooth roots and the canals morphology due to higher resolution than traditional computed tomography and the lower radiation [4,5].

Typically, the maxillary first premolar (MFP) has two roots and two canals, but the number of roots and the canals can vary from one to three. The incidence of three canals ranges from 1.2 % to 6 % [6-8]. In case of three canals in a premolar they can be distributed in one, two or three roots [9]. The term “radiculous” is used to describe the three-rooted premolars.

Usually, the mandibular second molar (MSM) is described as having three canals, two in the mesial and one in the distal root, but the number of the root canals can vary up to five, mostly located in two roots [10-13]. In the MSM, each root consists of two radicals which usually are not separated along the root. In some cases the two radicals can be separated apically, but complete separation is rare [14]. Respectively up to four roots in permanent MSM are described [1,15-20].

Morphological dental anomalies can be related to a single tooth, group of teeth or may affect the entire dentition [21-23].

Separate cases of three-rooted MFPs and four-rooted MSMs have been reported [7-9,11,16,17,20,24]. To best of our knowledge a coexistence of these variants in one patient has not been reported yet.

We present a case of 63-y-old Caucasian female underwent CBCT in order to evaluate both jaws before implant treatment planning.

The CBCT scan was taken by CBCT (ILUMATM, Imtec Imaging, Ardmore, OK). It was performed according to the manufacturer’s recommended exposure settings (120 KV, 40 s, 3.8 mA) and patient positioning protocol.

The patient had given informed consent for this examination and the case description was carried out in accordance with the principles described in the Declaration of Helsinki and all amendments and revisions. Only the investigators had access to the patient data.

On the CBCT images a three-rooted left MFP with two incompletely divided buccal radicals and one palatal root was found incidentally (Figure 1). 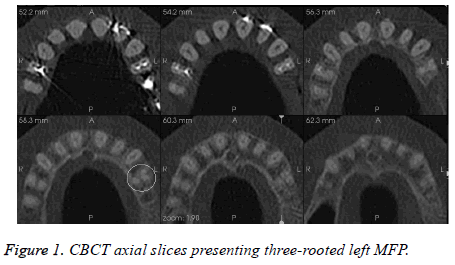 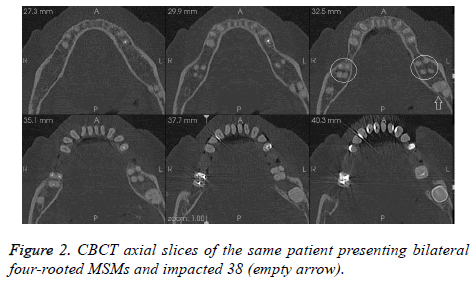 The knowledge about the teeth root and canal variations is very important for the successful endodontic treatment and endodontic surgery. Sometimes these variants can be incidental findings on the imaging studies used in dentistry as in the presented case.

In order to diagnose a three-rooted maxillary premolar on plain x ray image a rule proposed by Sieraski et al. can be used. They found that when the mesio-distal width of the mid-root image is equal or greater than the width of the tooth’s crown, the tooth is most likely to be with three roots [25]. Vertical or horizontal angulation of the x-ray tube can help to avoid the root overlapping and in case of doubts CBCT can be used as a method of choice to confirm the number of roots and their canals [3,4].

The symmetry of roots and root’s canal morphology is common for MSM as in our patient, although Plotino et al. found asymmetrical occurrence in 20% of cases [13].

The left three-rooted MFP in the presented case was unilateral and respectively asymmetric regarding the root number in comparison with the opposite two-rooted MFP.

In contrast, the presence of four rooted MSM is a very rare finding-0.55% according to the results of Shemesh et al. [20]. There are a few case reports and studies reporting data about four-rooted MSM, among them Purra et al. described an interesting case of MSM with three mesial and one distal root [11,16,20,24].

In our case three-rooted MFP coexists with bilateral fourrooted MSM and we didn’t find a report or study describing such a combination.

This case emphasize on the possibility of coexistence in one patient of two rare dental root anatomy variations (except commonly seen impaction of 38). Therefore clinicians should pay attention if one anatomic variant is present and to be aware for coexistence with another.

Further investigations should be performed regarding the incidence of such combinations between these rare but important anatomic variants.

CBCT can be very useful tool to present the morphology of the roots and their canals especially in case of doubt.

The whole field of view must be carefully observed and all found variations have to be notified.

Although coexistence of three-rooted MFP with four-rooted MSM is uncommon the radiologists and clinicians should be aware because of its importance for the dental practice.

This report adds a new knowledge about tooth roots variants and illustrates the possibility of their coexistence in one patient.