An evaluation of 182 cases with Henoch-Schonlein purpura (HSP) in China: A retrospective study and follow-up

Methods: The clinical data, of 182 HSP children treated at Shaanxi Provincial People's Hospital in Xi’an, from January 2010 to October 2012, was collected and analyzed accordingly.

Conclusions: HSP can present at any age, but is most common in school going children. More effective and aggressive treatment must be used to avoid the end-stage renal disease. Glucocorticoid treatment is effective for patients with severe abdominal pain and gastrointestinal bleeding, and the early short-term use of Prednisone results in quick recovery. Combined therapy with immune inhibitor is an appropriate therapeutic regimen for patients with nephrotic proteinuria.

The distinctive syndrome of Henoch-Schoenlein purpura (HSP) was first described by Heberden before 1800 [1], and in 1808 English physician Robert Willan described a patient who had swollen, painful joints and a rash [2]. Later, in 1837, Schonlein defined the association of purpuric cutaneous lesions with arthralgia [3]. In 1874, Henoch described the purpura with abdominal pain and melena [4].

This anaphylactoid purpura, is an immunoglobulin A (IgA) mediated, small-vessel vasculitis that predominantly affects children [5]. HSP is a systemic vasculitic syndrome characterized by non-thrombocytopenic purpura, arthritis or arthralgia, abdominal pain, and glomerulonephritis caused by the inflammation of polymorphonuclear cells accumulated in the walls of small vessels [6]. In children it happens mainly during spring and winter [7]. The hallmark of clinical manifestation is a non-neutropenic purpura, mostly found in the lower extremities. It is often accompanied with joint swelling, abdominal pain, hematuria and proteinuria, peripheral edema, vomiting and/or arthritis [8]. Hormone therapy can significantly relieve symptoms and improve the condition. Early glucocorticoid therapy in HSP patients with abdominal symptoms, like severe abdominal pain and gastrointestinal bleeding, shows a good effect [9].

In this study we aimed to explore the clinical characteristics of HSP and efficacy of different treatment methods.

The study was carried out in children’s hospital of Shaanxi Provincial People's Hospital. The clinical data of 182 HSP diagnosed pediatric patients, (aged<14 years), during January 2010 to October 2012, was collected and analyzed retrospectively for the clinical features, treatment modalities, and outcomes.

The diagnosis was based on the criteria proposed by the American College of Rheumatology (ACR) [6,10]. ACR criteria for HSP requires the presence of at least two of following: (I). Age lower than or equal to 20 years at disease onset; (II). Palpable purpura; (III). Acute abdominal pain; (IV). hemorrhagic diarrhea with bowel ischemia; (V). Exclusion of other hematological disorders.

The pathogenesis and clinical manifestations of HSP children were analyzed along with the diagnostic and prognostic investigations such as the blood tests; including the blood routine examination, C-reactive protein (CRP), erythrocyte sedimentation rate, (ESR) and occult blood tests; urine and feces routine examinations; and B-mode ultrasound examination. The data regarding treatment modalities was also analyzed accordingly. The statistical analysis was carried out using Statistical Package for the Social Sciences (SPSS) version 18.0 (SPSS Inc., Chicago, IL, USA).

Table 1: Demographics presentation of the patients.

Figure 1: The clinical manifestations amongst the patients (n=182).

Figure 2: The clinical manifestations according to different age groups (n=182).

Laboratory tests showed differences amongst the age groups. Increased WBC and CRP, and urine abnormalities were the most common laboratory findings. The 7~14 years’ age group suffered the most from increased WBC and CRP, with abnormal urine, while 4~6 years’ age group suffered the most from melena and abnormal renal USG imaging. Figures 3 and 4, graphically show the laboratory results values comprehensively and according to age groups, respectively. 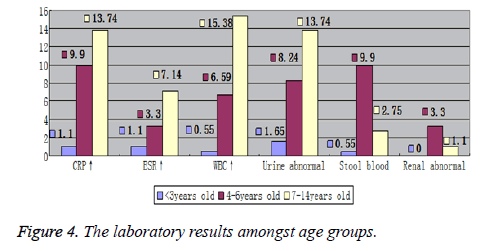 Treatment: Mainly symptomatic treatment with anti-allergic was used for HSP patients. Glucocorticoid therapy was used to improve abdominal pain and joint symptoms, in case of infection, the antibiotics were used accordingly. The treatments modalities were divided into four groups: general treatment, glucocorticoid therapy, immune inhibitor treatment and anticoagulant therapy (Table 2). First choice glucocorticoids were, oral prednisone 30 mg once daily and I.V dexamethasone 5~10 mg daily infusion. Severe symptoms were treated with I.V hydrocortisone 100~200 mg daily for 3 to 5 days, which on improvement was changed to oral prednisone. Kidney patients were added with immunosuppressive agents (such as azathioprine 2 to 3 mg/kg/d cyclophosphamide 3 mg/kg/d, or triptolide 20 mg tid).

HSP children were not all treated with single drug regimen but mixed treatment was also used in some children. Total cure rate was 52.7%; improvement with treatment was shown in 32.8%; no improvement was shown in 14.1%; while complications were shown in 5.4% of the HSP patients. The therapeutic treatment efficiency showed a statistical significance, X2=8.647, P<0.05. An efficient pairwise statistical comparisons was performed, where Glucocorticoid therapy compared to general treatment showed statistical significance, X2=6.757, P<0.05, while the rest were not statistically different. 47 of 182 patients with HSP showed GI disease in our study.

Follow-up: In order to control the recurrence rate, regular follow up was conducted to check the state of illness. The reasons of recurrence were; food, clothing materials, vaccinationparasite infectionpollen, and other factors. 29 patients developed nephritis confirmed by abnormalities of urine protein and the urine red blood cells. Children older than 3 years of age showed a high recurrence rate. The patients were followed for 12 to 23 months respectively till they had no symptoms of renal disease at last visits. 18 patients recovered with only steroid treatment while 9 patients recovered with steroid and cyclophosphamide treatment. 2 patients were followed without treatment because their renal diseases resolved spontaneously within 3 and 4 weeks.

Prognosis: Among 182 patients, there were 10 cases which developed complications, 3 cases with intestinal obstruction, while 7 cases with purpura nephritis. 5 cases of purpura nephritis were cured completely before discharge while the other 2 cases were discharged from the hospital with significant improvement and were advised continued home treatment. HSP prognosis was very good, the general improvement was observed in 6-8 weeks. Some of the cases (40%) showed recurrence, but the recurrence was observed to be having decreasing trend.

HSP which is characterized by a purpuric rash, arthritis, nephritis and gastrointestinal symptoms is a systemic vasculitis of unknown etiology [11]. The cause of the disease is not clear, although the food, drug, microorganism infection, vaccination, anesthesia, toxins; such as alcohol, heavy metals and cocaine, lead to vasculitis, but there is no definitive evidence [12]. Immune complex deposits in the vessels and results in necrosis of the wall of small and medium-sized arteries with infiltration of tissue by neutrophils and deposition of nuclear fragments, a process called leukocytoclastic vasculitis (LCV) [13]. The most common bacterial infection associated with HSP are beta hemolytic streptococcus infection, followed by Staphylococcus aureus, Mycobacterium tuberculosis, and Typhoid Bacillus [14].

Symptoms can appear in different combination, starting with skin purpura, abdominal pain, joint swelling and pain, and kidney symptoms. Initially, it may resemble an urticarial or erythematous macular-papular rash before developing into a palpable purpura symmetrically distributed near the large joints of the lower limbs and buttocks [15]. Joint symptoms may begin with a slight pain and redness, swelling, and movement disorder. A single joint or occasionally multiple joints gets involved leading to migratory joint swelling or arthritis. The disease often involves the large joints such as the knee, ankle, elbow and wrist joint, and thus often easily gets mistaken for rheumatism [16]. Gastrointestinal symptoms occur in approximately two thirds of children with HSP and usually are manifested by abdominal pain. Abdominal symptoms precede the typical purpuric rash in one third of HSP; the symptoms may mimic an acute surgical abdomen and result in unnecessary laparotomy [17]. Our results also correspond with the reported literature as lower limb skin rash occurred in 40.1% of the patients in our study followed by abdominal pain which occurred in 21.98% of the patients [18,19].

Laboratory results of HSP patients show normal or increased WBCs and platelets; generally, without anemia unless severe bleeding; normal bleeding and clotting time; positive capillary vascular fragility test; normal or faster erythrocyte sedimentation rate; increased serum IgA, IgG, and IgM; normal or elevated C3, C4; and negative antinuclear antibodies and RF. Bone marrow examination is usually normal with occasional eosinophilia [20]. Urine test shows proteinuria, red blood cells, white blood cells and casts, and sometimes severe gross hematuria. Stool examination may reveal parasite eggs and occult blood test can be positive. Pathological examination shows diffuse small blood vessels around the inflammation, with aggregates of neutrophils around the blood vessels, and immunofluorescence shows IgA in the dermis layer of the vessel wall [21]. Abdominal ultrasound is conducive to the early diagnosis of intussusception. Renal biopsy helps to understand the disease severity and treatment success in persistent and severe kidney symptoms [22]. Our study shows increased CRP in 24.72% of the patients followed by abnormal urine in 23.63% cases, increased WBC in 22.53% cases and melena in 13.19 % cases, which came out to be in accordance with the previously reported studies [23].

Treatment with glucocorticoids can significantly relieve symptoms especially the gastrointestinal bleeding and can improve the general condition swiftly [10]. Glucocorticoid and immunosuppressive agents may also be used in combination therapy [24]. Hydrocortisone has better effects in treating hematochezia, than that of dexamethasone, while for kidney symptoms prednisone or immune inhibitors are better choice. In our study 75 out of 79 patients got cured with glucocorticoid treatment, while 27 out of 32 patients got cured with immune inhibitors, 112 (61.54%) patients out of 182 had a hospital stay of 10 days, 60 (32.77%) patients had 20 days’ hospital stay while only 10 (4.52%) patients had 1-month hospital stay with an average hospitalization stay of 15 days.

Previous studies have attempted to correlate clinical symptoms to systemic involvement. Large studies in children have found increased age, persistent and severe purpura, severe GI symptoms and relapsing HSP as predictive of renal involvement [25]. In our study, the presence of lesions above the waist and clinically evident edema were both significantly associated with G1 involvement. These findings emphasize the importance of a diligent physical examination.

HSP can present at any age, but is most common in school-age children. Generally, the prognosis is good, with the exception of those with significant renal involvement. More effective and aggressive treatment must be used to avoid the end-stage renal disease. Glucocorticoid treatment is effective for patients with severe abdominal pain and gastrointestinal bleeding, and the early short-term use of Prednisone results in quick recovery. Combined therapy with immune inhibitor is an appropriate therapeutic regimen for patients with nephrotic proteinuria. Hence, epidemiological and retrospective studies like the one presented would provide a better understanding of the clinical approach towards HSP, and would allow us to prepare training plans for residents and pediatricians for the purpose of improving health care quality.