Introduction: There are two principals indication to the esophageal replacement: the Long-Gap esophageal atresia and the caustic stenosis. The “main goal” for every surgeon is to choose the best substitute of it. Materials and methods: It is a multicentric retrospective study that includes 27 patients who had undergone to an esophageal replacement between 1990 and 2015. The aim is to find the best esophageal substitute analyzing the experiences of some European hospital Results and patients: Of the 27 patients, 19 (70, 4%) had a long-gap esophageal atresia and 8 (29,6%) a caustic stenosis. 8 patients have had a gastric pull-up, 9 a jejunal interposition and 10 a colonic interposition. The median age at the surgery was 41,3 months. The median follow up was of 72,1 months. We have had a 63% of postoperative complications and the mortality rate was 3.7%. Discussion and conclusion: There are not significantly difference between the three groups regarding the follow up whereas the colonic interposition group has shown a higher rate of postoperative complication and mortality. We cannot find the best choice as esophageal substitute but our study shows that the jejunal interposition could be chosen as first option.

The fundamental axiom of the esophageal surgery is that “the best esophagus is the native esophagus”, nonetheless there might be conditions (i.e. the Long-Gap Esophagel Atresia, LGEA) where the choice to preserve the native esophagus embeds several threats for the patient [1]. As a consequence, the esophageal replacement (ER) becomes mandatory. There are many surgical techniques for such replacement, for example: the gastric pull-up (GPU), the gastric tube, the colonic interposition (CI) and the jejunal interposition (JI). However, there is a lack of general consensus regarding the surgery leading to the best results for the patient. Hence, this paper aims at providing a detailed overview of our results about different ERs, including CI, JI and the GPU.

The need for such replacements related either to Caustic Stenosis (CS) either to LGEA, where an immediate primary end-to-end anastomosis, owing to the distance between the proximal and distal esophageal remnant is usually not practicable. In structuring the analysis we have used the following parameters: mortality, postoperative complications, need for a second operation and the presence of dysphagia achievement of the 50º percentile of the height-weight curves as the last control of our group (subdivided by operation type). The presence of dysphagia was based on the revised Rome III diagnostic criteria. To confirm the soundness of our results we have performed the T Student test and the Fisher’s exact test, considering significant a P value<0.05.

This technique have popularized by Spitz but it was first reported by Sweet at Mass General Hospital in Boston was firstly introduced by Spitz et al. was used [2-7]. The stomach is mobilized through a transverse laparotomy. The right gastric artery is identified and preserved, whereas the left gastric artery is divided close to the stomach. Then, the distal esophagus is dissected and the stomach is mobilised via a posterior mediastinal tunnel into the neck. An esophagogastric anastomosis is done at the apex of the stomach. Many surgeons performed a pyloromyotomy.

This technique had the largest published cohort by Hamza et al. was used [8]. The left colon was used for the replacement. First of all, the colonic vascularisation is evaluated through a transverse laparotomy, and the left colonic artery is preserved. The route of the transposition stands behind the stomach and the pancreas. Three anastomosis are made, the first between esophagus and colon, the second between colon, stomach, and the third from where the graft come. A gastrostomy is done. Many surgeons performed a pyloromyotomy and a fundoplication

The technique was introduced was used [9-11]. A control of the bowel and the vascular anatomy is performed from a median laparotomy. The fundus is separated from the diaphragm and the short vessels are severed. The posterior hiatus is opened after the mobilization of the left crus. After the pedicle graft is created: the segment of jejunum close to the Treitz is selected. The first two mesenterical arteries are divided to preserve the peripheral vascularisation. The jejunum is then skeletonized upwards leaving the uppermost part in place for interposition. The anastomosis to restore the bowel continuity is performed and then the graft is mobilised into the neck through the posterior hiatus. Finally, the anastomosis between upper esophagus and jejunum and between jejunum and stomach are made.

Our sample included 27 patients: 10 females and 17 males (respectively 37% and 63%). In 19 patients the ER was due to LGEA, while for the remaining 8 it was caused by a CS. Before the operation, patients with LGEA undertook an upper gastro-intestinal X-Ray with barium, whereas patients affected by CS had an upper gastro-intestinal X-Ray (Figure 1) with barium and an endoscopy. Patients have been additionally subdivided in three groups: 8 for GPU, 9 for JI and 10 for CI (29.7%; 33.3%; 37%). 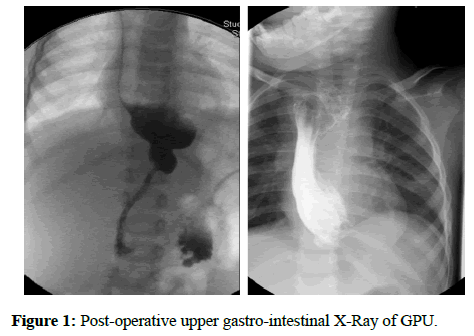 On average, we have observed different ages between the two groups based on the indications to the surgery (ERs due to LGEA and to CS). Precisely, 17.3 months (0.1-72 m) for the first and 80 months (12-192 m) for the second one. We used a nasogastric tube and a drainage chest tube for all those patients ranging between 7 and 9 days after the surgery. They have started feeding after 7 or 8 days from the operation and all of them undertook an antacid therapy.

Table 1: Patients’ surgery complication, *we have considered only the occlusive syndrome that has treated with another surgery.

We have analysed these differences using the T Student distribution test without finding statistically significant differences (CI p=0.173; JI p=0.4007; GPU p=0.5909). In our study, we have not considered reflux and redundancy as complications since not all the patients undertook an endoscopy or a pH-metre after the surgery and the redundancy was not always symptomatic.

During our study, only 1 patient died; she belonged to the CI group due to an anastomotic leakage complicated by a mediastinitis after 14 days from the surgery. The observed mortality accounted for 3.7%, hence not representing a statistically significant difference (p=1.000). Such mortality value regarding the CI (10%), higher than the one observed in Literature was due to the sample relatively small dimensions [12].

An additional surgery has been required in 3 (11.1%) patients, all of these belong to the CI group. In two cases the second surgery was due to an occlusive syndrome, in one patient the conduit had necrosis. The comparison between techniques had no statistically significant differences (CI/GPU p=0.2157, CI/JI p=0.2105).

The 72.1 months follow up regarded 23 patients (1 patient died and we lost 3 patients after the discharge). It has lasted for long than 5 years, the maximum required delay to register a significant improvement in the quality of life [13]. In the last follow up only 23 patients (85.2%) did not show problems in feeding and only 14.8% of them presented dysphagia (we supposed that 1 patient was affected by a münchhausen syndrome). Only the JI group lacked patients with dysphagia (2CI, 2GPU) (Figure 2). Although some differences between these groups have arisen, they were not statistically significant (CI/JI p=0737; CI/GPU p=1000; JI/GPU p=0157). 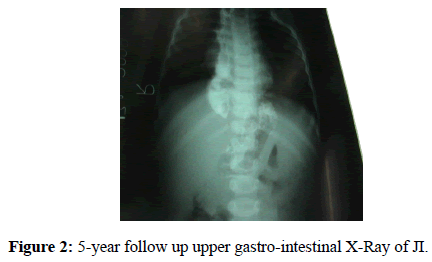 All patients have increased their weight during the follow up, out of which 17 fell within the 50° percentile of the heightweight curves (5 for GPU, 5 for CI and 7 for JI), 9 in the 3° and only 1 below the 3°. We have considered the 50° percentile as a benchmark for a good improvement in height and weight, and even in this case the observed differences were not statistically significant (CI p=0.3029; GPU p=0.9754; JI p=0.2771) (Table 2).

Table 2: Summary of our results, * the percentages are considered on the totality of patients.

For the purpose of our study, it is worth mentioning that conserving the native esophagus is not always the best option and the ER might become mandatory. Nevertheless, the best replacement technique still needs to be found. Our retrospective analysis has allowed us to compare three technical surgeries for the ERs, with a particular focus on surgery complications and the patients’ follow up. All the surgeries taken into account have been done by one-step even if sometimes surgeons prefer two-steps surgeries [14,15]. The leakage and the stenosis of the anastomosis are the most analysed by the Literature.

The analysis of the GPU group has shown that this specific technique might be a good way to create the new esophagus [16]. Moreover, it is easy to implement presenting a low complication rate as well, both during and after the surgery. Insights suggested that follow ups have lasted on average 5 years, providing evidences that patients have steadily improved their height and weight, feeding properly after the surgery.

As regards the JI, the advantages relate to the fact that it is the most similar esophagus substitute due to the maintenance of the peristalsis [17] and to the right size of the graft. However, it leads to both, a poor vascularisation of the conduit and the difficulty to create a cervical anastomosis without tension. For the last reason the JI seems to have a higher rate of anastomotic complications [18].

The analysis of the JI group has highlighted a lack of complications during the surgery. In addition, our patients have not been affected by the conduit necrosis, the major complication for this particular surgery. These patients’ follow up has accounted for, on average, 7.3 years, without difficulties in feeding. As a matter of fact, 7 of them have reached the 50° percentile of the height-weight curves. As far as the CI is concerned, the advantages are: the optimal vascularisation and the proper size of the graft. Instead, the disadvantages are: the risk of the conduit ulceration caused by the reflux, the redundancy, the need for three anastomosis and the growth retardation [19,20].

The CI group showed the highest complication rate, including the conduit necrosis as well. Here, we have observed a standalone case of mortality. In addition, during the follow up 5 patients have achieved the 50° percentile of the height-weight curves. Despite its complication rate, the CI is the most widespread technique [15-20].

Our study has provided evidences that the best substitute for an esophagus is likely to be the native one and among the possible substitutes there is not a widespread best practice. In our opinion, all the surgeries evaluated in this study might be the “best choice” for the patient. Therefore, the surgeon’s preferences and abilities become the main drivers when discriminating among different alternatives. Such thesis is confirmed by the lack of statistically significant differences between the GPU, the CI and the JI. However, our results have shown that the JI had a low rate of complications and mortality; this group did not need a second surgery and during the follow up no one has been affected by dysphagia. Moreover, this group presented the higher rate of patients achieving the 50° centile of the height-weight curves. According to these clinical results, we believe that the JI should be the first choice for this surgery in the future.