An efficient approach for detecting exudates in diabetic retinopathy images

The blood vessels are responsible for supplying the blood throughout the entire region of the retina. The retinal blood vessels are damaged due to the ageing of the people and other factors such as blood pressure. Exudates lesions are formed in retinal image due to the damage in retinal blood vessels. Ignoring these lesion symptoms leads to the loss of vision, as these symptoms are not exposed easily and requires diagnosis at an earlier stage. In this paper, the hard and soft exudates are detected and segmented using mathematical morphological operations. The proposed algorithm for soft and hard exudates detection is applied over the retinal images of MESSIDOR dataset. The sensitivity of 96.1% and specificity of 94.6% are achieved for soft exudates detection. The sensitivity of 98.71% and specificity of 99.56% are achieved for hard exudates detection.

Diabetic Retinopathy (DR) is a retinal disorder in diabetic patients. Retinal image processing plays an important role in the process of detection and diagnosis of DR. Early treatment of DR prevents the vision loss in diabetic patients. The retina consists of blood vessels, Optic disc (OD) and Optic cup as shown in Figure 1A. The blood vessels originate from the center of the OD and spreads over the entire region of the retina. The thin blood vessels are damaged due to the high pressure in blood vessels which breaks the thin blood vessels and the broken vessels leaks the lipids and proteins around the retina. These lipids form the abnormal lesions in the retina. The abnormal lesions are categorized into exudates, cotton wool spots, microaneurysms and hemorrhages. The presence of exudates in and around the macula region leads to the formation of macula edema [1] in the diabetic patients. In this paper, the computer aided automatic detection of exudates is proposed. 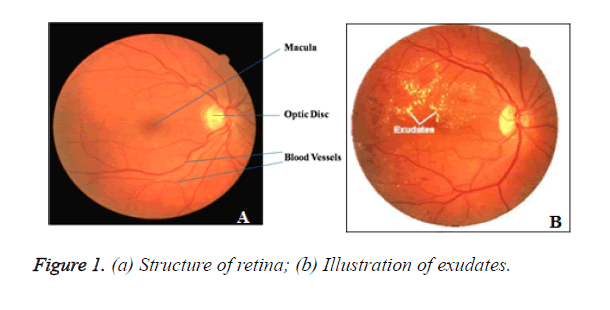 Figure 1. (a) Structure of retina; (b) Illustration of exudates.

Phillips et al. [2] proposed a method for exudates detection using global and local thresholding method. The photographic non-uniformities were suppressed before the exudates detection process. The contrast of the retinal image was further improved and then thresholding was applied to segment the exudates pixels in the retinal images. The authors achieved 61% of sensitivity and the main limitation of this work was that the cotton wool spots were mistakenly identified as exudates. Sinthanayothin et al. [3] devised an abnormal lesion exudates detection algorithm using the recursive region growing technique by integrated with multiple thresholding technique. The author failed to consider the other bright abnormal lesions which were identical to the exudates. The researcher applied their algorithm on a small dataset comprising of 21 abnormal and 9 normal fundus images. The researcher achieved 88.5% sensitivity and 99.7% specificity in detecting the exudates lesions. Osareh et al. [4] used Intelligence-Based Approach for the detection of exudates in the retinal images of the diabetic patients. Fuzzy c means clustering technique was used to cluster the pixels and further color enhancement process was done. The features as color, size, edge strength, and texture were extracted from these clustered regions and they were ranked by genetic algorithm. The selected features set were trained and classified using multilayer neural network classifier. The authors achieved 93.5% sensitivity and 92.1% predictivity for exudates segmentation.

Most of the conventional methods for exudates detection were based on thresholding technique and supervised-unsupervised classifier. However, the direct application of thresholding on color spaces can be problematic due to significant spatial illumination variations. In this paper, morphological operations based exudates detection methodology is proposed to eliminate such limitations in the conventional methods.

In this paper, publicly available dataset MESSIDOR is used.

This dataset [7] is used for the detection and segmentation of exudates and its performance analysis for DR severity classifications. This dataset contains 148 images with exudates and 233 exudates-free images. The specialists' annotations on the 148 images are given in the form of a binary mask. They correspond to the position of each exudate as marked by a dot or a small region, which are noticed as ground truth images. The colour video 3CCD camera on a Topcon TRC NW6 nonmydriatic radiograph is used to capture the retinal images in this dataset. All the images are acquired with the field of view (FOV) of 45°. 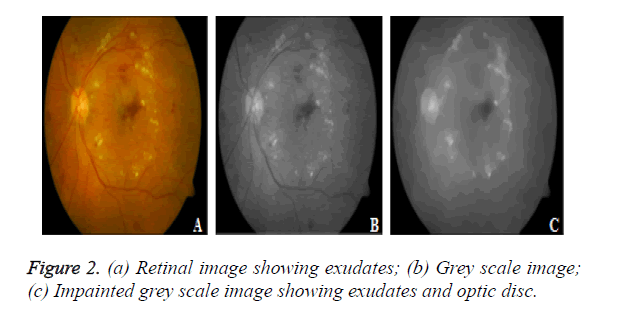 The correlation function of linear filtering algorithm [9] is now applied on the impainted image. Correlation is equivalent to two-dimensional convolution with Kirsch’s kernel [10] filter matrix. It rotates the default Kirsch’s kernel to 180° as north, east, west, south, north-west, north-east, south-west and south-east to create eight convolution kernels [10]. The corresponding individual pixel values in eight filtered response images are grouped and the maximum response pixel value is chosen from these eight individual corresponding pixels. The same procedure is applied for the remaining pixels in eight filtered images in order to produce the final maximum response integer image. Now, the maximum response binary image (Figure 3A) is created by applying logical function [11] on the maximum response integer image. Finally, morphological area opening is applied on maximum response binary image to segment the hard exudates in the retinal images (Figure 3B). The detected hard exudates are shown in Figure 3C. 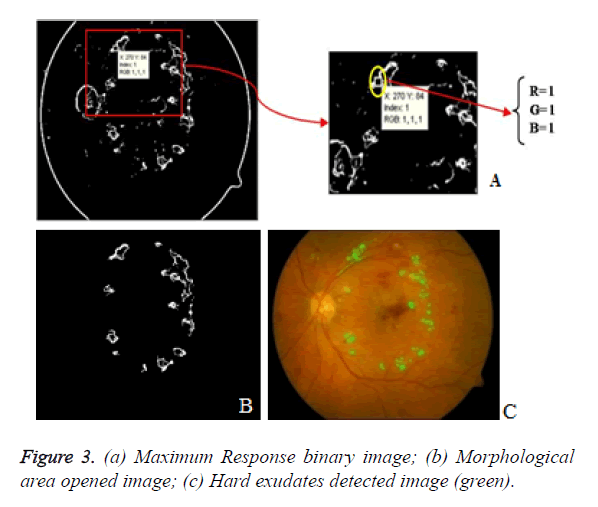 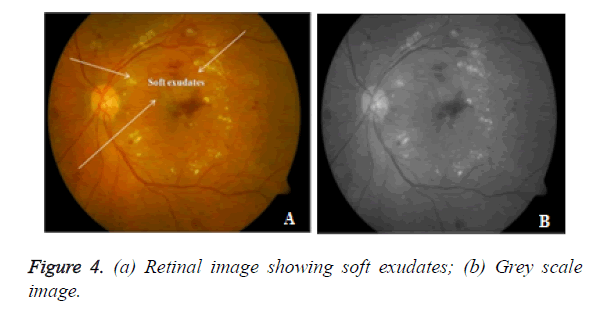 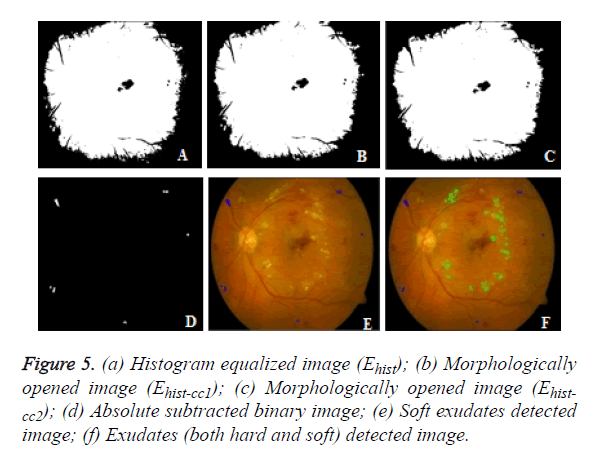 Ip is the maximum pixel intensity (255)

Pʹc is the neighborhood pixel of center pixel Pc

e is the square root of the size of mask window

The values of h and e are chosen to be 9 and 3 after several iterations, respectively.

Then, determine the connected components of histogram equalized image by applying binary morphological opening [5] which removes all connected components (objects) that have fewer than 50-connected neighborhood pixels (by several iterations), producing another binary image Ehist-cc1 and shown in Figure 5B.

The detected hard and soft exudates are depicted in Figure 5F.

This section describes the performance evaluation details of hard and soft exudates, in detail with state of arts methodology. The proposed algorithm is applied on the MESSIDOR dataset images and results for exudates are obtained. The MATLAB R2012 version is used in this work for simulation and it takes approximately 6 seconds per image on an average to run on Intel Pentium core i5 processor with 1 GB of internal RAM. To evaluate the performance of the exudates detection algorithm stated in this paper, the publicly available dataset ‘MESSIDOR’ is used. The performance of proposed exudates segmentation results are analysed with respect to ground truth images, which are obtained from expert ophthalmologist. The following performance evaluation parameters (Marín et al.) [13] are used to validate the proposed exudates segmentation results and they are given in Equations (5) and (6).

Sensitivity is defined as the ratio between the number of TP and the sum of the total number of TP plus FN. The value of sensitivity lies between 0 and 1.

The conventional methods were not providing optimum results for further detection and screening of diabetic retinopathy by detecting the abnormal lesions in the retinal images. Our approach detects and segments hard and soft exudates from the retinal images by implementing morphological operations, thus increases the performance of the exudates segmentation. The proposed exudates detection algorithm achieves better average sensitivity and specificity in abnormal retinal images for the retinal images available in MESSIDOR dataset. The obtained results are tabulated in Tables 1 and 2. The graphical illustration for the comparisons of the hard exudates is given in Figure 6. 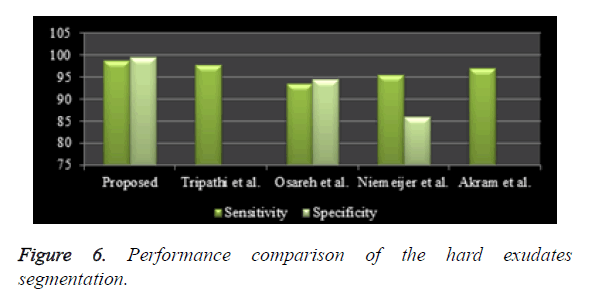 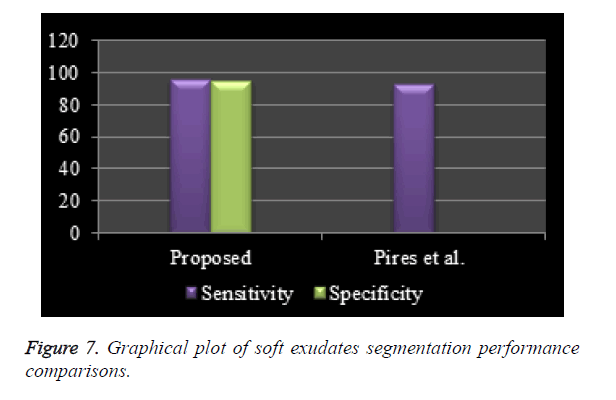