Objective: To investigate whether the use of amlodipine/atorvastatin can affect vascular endothelial function as well as blood vessel elasticity and lipid level compared with hypotensor alone.

Conclusions: In conclusion, we found that Amlodipine/atorvastatin combination pills can improve vascular endothelial function as well as vascular elasticity, and down-regulate the level of hs-CRP.

Cardiovascular disease, a major cause of death worldwide, has the following risk factors: hypertension, age, smoking, glucose tolerance, family history of premature cardiovascular events, obesity, high homocysteine level, and dyslipidaemia. Hypertension is the most important factor among which. Framingham risk score showed that, of hypertensive patients, 78% of men and 82% of women have at least one risk factor [1].

Hypertension and dyslipidaemia are the main reasons for endothelial dysfunction and decreasing arterial elasticity. Studies have indicated that the occurrence and development of cardiovascular disease are related to decreased arterial elasticity [2]. The co-existence of hypertension and high cholesterol can accelerate endothelia dysfunction, causing atherosclerotic plaque formation, the main cause of cardiovascular disease [3]. Most experiments have shown that the rate of death can be decreased by the combination of the treatment of hypertension and hyperlipidaemia [4,5]. Therefore, drug and non-drug methods of controlling blood pressure and lipid levels can reduce cardiovascular mortality rates and improve patient quality of life.

The 162 participants in this survey were chosen from among inpatients between March and December 2012 who were administered domestic compound hypertensive tablets, amlodipine tablets, or amlodipine/atorvastatin. The patients were 30-75 years of age, did not have hyperlipidaemia, and had one or two cardiovascular risk factors or being treated at baseline. Both genders were included. After 3 months, 144 participants remained: 44 were included in Group 1 (domestic compound hypotensive tablets which are from China and contain 5 potent medicines: reserpine, chlordiazepoxide, hydrochlorothiazide, dihydralazine sulfate, triamterene. 1 tablet once and per day); 48 were in Group 2 (amlodipine tablets 5 mg per day), and 52 were in Group 3 (amlodipine/atorvastatin, 5 mg per day). Patients were diagnosed according to 1999 World Health Organization/International Society of Hypertension criteria, i.e., systolic blood pressure ≥ 140 mmHg and/or diastolic blood pressure ≥ 90 mmHg, which is in accordance with the 2010 Chinese Hypertension Guideline criteria. The lipid levels of the selected participants corresponded to the 2013 European Society of Cardiology/ European Society of Hypertension (ESC/ESH) management guidelines [7]: total cholesterol ≤ 200 mg/dL, Low-Density Lipoprotein Cholesterol (LDL-C) ≤ 120 mg/dL, and Triglycerides (TG) ≤ 150 mg/dL. All participants provided written informed consent. The experiment excludes the patients whose basal blood pressure>180/100 mmHg, or secondary hypertension, or LDL-C>125 mg/dL, or TG>400 mg/dL, or ejection fraction<40%, or the co-existence of other serious diseases.

The mean FMD of all groups improved significantly. Group 3 showed the highest degree of improvement, followed by Groups 2 and 1. However, no difference in EID was seen (Table 2 and Figure 1). 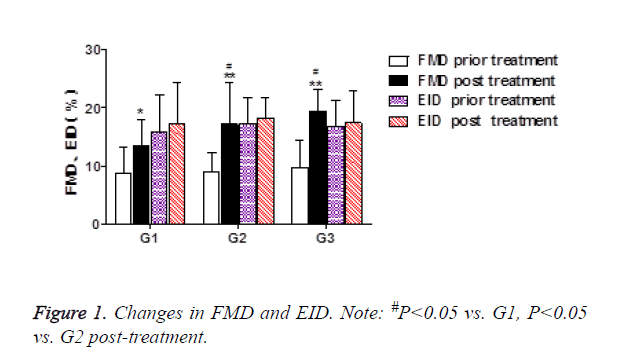 After treatment, the c-f PWV of Groups 2 and 3 were significantly improved, whereas that of Group 1 did not change. There were no statistically significant changes among the three groups (Table 2 and Figure 2). 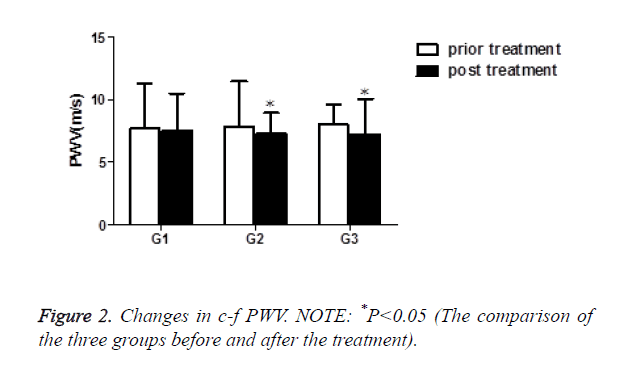 Figure 2. Changes in c-f PWV. NOTE: *P<0.05 (The comparison of the three groups before and after the treatment).

After treatment, the lipid levels of the participants in Group 3 decreased, while those in Groups 1 and 2 did not change. The hs-CRP levels of Groups 2 and 3 also significantly declined, whereas that of Group 1 did not change. The differences in hs- CRP levels in Groups 2 and 3 were statistically different from those in Group 1 but not statistically different from each other (Table 3).

The “China Cardiovascular Disease Report 2011” shows that China currently has 230 million patients with cardiovascular disease and that 350 million succumb to it yearly, accounting for 41% of all deaths [6]. As is known to all, the cardiovascular diseases such as hypertension and coronary heart disease share the same physiological and pathological basis-atherosclerosis. In the presence of hypertension, vascular endothelial cells are stimulated by growth factor and vasoactive substances, leading to an increase in the migration of vascular smooth muscle cells and promoting the development of molded fibrous [8,9]. Long-term uncontrolled hypertension is the main cause of cardiovascular disease, particularly when accompanied by genetic factors, environmental factors, and structural abnormalities of blood vessels. Therefore, the treatment for hypertension also focuses on changes in vascular function.

In the clinical setting, there are many measurement methods for vascular function, including PWV, FMD, urinary micro albumin/creatinine, and Nitric Oxide (NO).

The main forms of atherosclerosis are vasoconstriction and endothelium dysfunction, which finally causes the partial or complete close-up of vascular. So for the patients with hypertension, it is crucial to prevent and treat Atherosclerosis. The 2010 ESC/ESH hypertension management guidelines changed the c-f PWV standard from 12 m/s to 10 m/s. Generally speaking, the larger the value, the greater the degree of stiffness. Benetos et al. found the accelerated artery stiffness can be affected by blood pressure, heart rate, and c-f PWV after they had been following up the treated patients with hypertension and the participants with normal blood pressure for 6 years [10].

In addition, Laurent et al. examined 1,715 patients with hypertension for as long as 7.9 years and found that as the c-f PWV increased by 4 m/s, the patients’ relative risk of stroke increased to>1.72 and that after adjustment for cardiovascular risk factors, c-f PWV remained a significant indicator (relative risk=0.39, P<0.02) [11].

The ACTION study [13] found that amlodipine demonstrated some anti-atherosclerotic properties, stimulated NO production, act as an anti-oxidant, and regulate matrix deposition. This study found that after treatment of amlodipine or amlodipine/atorvastatin, vascular function is obviously improved; in contrast, vascular function is not improved by Guo compound antihypertensive drugs, as found in early research. Therefore, vascular function is best improved by amlodipine/atorvastatin treatment. Atorvastatin interferes with the development of atherosclerosis through non-lipid-related and pleiotropic effects, including improved endothelial function, reduced vascular smooth muscle cell proliferation, stabilized athermanous plaques, reduced inflammation, and reduced platelet aggregation [14]. In an open-label study of 21 hypertensive, hypercholesterolemic patients, 3 months of amlodipine treatment improved large and small vessel arterial compliance by 26% and 38%, respectively, and reduced systemic vascular resistance by 10% (all P<0.0001 vs. baseline) [15]. The addition of atorvastatin for an additional 3 months improved small-vessel arterial compliance by an additional 42% (P<0.001 vs. month 3) and reduced systemic vascular resistance by an additional 5% (P<0.05 vs. month 3). In contrast, large-vessel compliance was not further improved by combination therapy. What’s more, Azushima et al. also found the effects of single pill-based combination therapy of amlodipine and atorvastatin on within-visit blood pressure variability and parameters of renal and vascular function in hypertensive patients with chronic kidney disease.

In conclusion, we found that Amlodipine/atorvastatin combination pills can improve vascular endothelial function as well as vascular elasticity, and down-regulate the level of hs- CRP.