Enterococci, especially the Vancomycin Resistant Enterococci (VRE) with limited options for treatment, are significant nosocomial pathogens. Enterococci, although they have a low virulence, may settle in the hospitals and cause serious infections since they demonstrate multi-drug resistance [1,2]. Urinary tract infections, bacteraemia, and endocarditis are frequently caused by these bacteria in hospital [3]. Vancomycin resistant enterococci in patients are associated with serious outcomes such as increased mortality, morbidity, and medical costs [4]. The determination of the multi-antibiotic resistance of enterococci and appearance of evidence of exogenous acquisition of enteroccal infections has increased the necessity of epidemiological studies and identification of the species [5]. Classical typing methods such as bacteriocin (enterococci) typing, phage typing, biochemical reaction profiles, antimicrobial resistance patterns, and serologic methods have been used in the evaluation of hospital epidemiology. However,classical phenotypical methods generally could not adequately differentiate enterococci. Molecular typing plays an important role in the evaluation of resistant enterococci, and the prevention and control of their spreads [5,6]. Pulsed Field Gel Electrophoresis (PFGE) has been proven to be useful for high discriminatory power, so that Pulsed Field Gel Electrophoresis (PFGE) is considered the gold standard reference method for molecular typing of enterococci. However, the main limitation of Pulsed Field Gel Electrophoresis (PFGE) include its being time consuming, requiring experienced personnel, is technically variable, and is expensive [7-9]. DiversiLab System (DL) (bioMerieux, Marcy Etoile, France) was introduced a semi-automated rep-PCR system. It has more advantages than rep-PCR, such as higher reproducibility, standardization, and archiving fingerprinting patterns and reporting [3,10-12]. The commercialized DiversiLab system (BioMerieux, Marcy I’Etoile, France) is a semi-automated rep-PCR technique [7]. This system has some noticeable advantages, such as simplistic data elaboration, production of results within one day, fingerprinting patterns, higher reproducibility, and visualization of the data. Additionally, strains, are compared over time to understand the charting the epidemiological of isolates with this system [7,8,11-15]. We investigated the two methods to distinguish the clonal relationship among epidemiologically well-defined isolates of vancomycin resistant enterococci. Furthermore, the technical properties of the DiversiLab System were compared with Pulsed Field Gel Electrophoresis (PFGE). The determination of the epidemiological and genotypic associations of the isolates would provide important benefits in the prevention of or decrease in the rate of hospital infections. It is expected that this knowledge will support clonal investigations of vancomycin resistant enterococci around the world.

Forty-eight Vancomycin-Resistant Enterococci (VRE) isolated from rectal swab samples obtained from the patients hospitalized in various clinics in the context of a surveillance program conducted by the Infection Control Committee of the Numune Education and Research Hospital, Ministry of Health, and environment cultures and clinical materials between November 9, 2011 and December 14, 2011 were included in this study. Eighteen (37.5%) of the samples were rectal swab samples and 26 (54.2%) were obtained from the environment cultures taken from the rooms of patients colonized/infected with Vancomycin-Resistant Enterococcus faecium (VRE). Seventeen of the cases (65.4%) were isolated from the bed rails, four (15.4%) from the whatnots, two (7.7%) from the closets, and one each (3.9%) from the bedside table, dressing cart, and mobile ultrasonography equipment, respectively. Detailed information about the strains is presented in Table 1.

The cultivation of rectal swabs and environmental samples obtained by sterile swabs were performed on an enterococcus agar plate (Oxoid, United Kingdom). They were incubated for a maximum of 72 hours at 37˚C in an aerobic medium. Environmental samples were incubated in Vancomycin- Resistant Enterococci (VRE) broth agar (Oxoid, United Kingdom) for 24 hours at 37˚C prior to cultivation in enterococcus agar plate. Colonies growing black in color in the enterococcus agar plates and suspicious colonies of clinical samples observed in sheep blood agar were evaluated using conventional methods and defined as Enterococcus spp. Strain definitions and antibiotic sensitivity were performed using a Vitek-2 automated system according to the directions of the manufacturer. 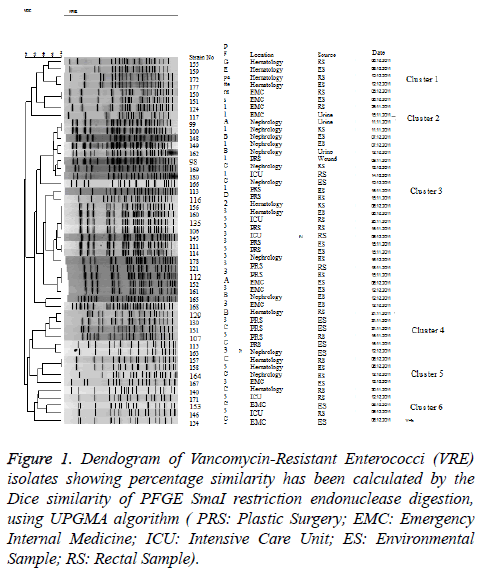 A total of four clones were identified by Rep-PCR during the evaluation performed after fingerprint analysis to determine the genetic associations of Vancomycin-Resistant Enterococci (VRE) isolates. Two, two, 35, and three Vancomycin-Resistant Enterococci (VRE) strains were present in the A, B, C, and D clones, respectively Figure 2. The similarity of the two isolated in the A clone was 99.2% and these two isolates were obtained from the rectal swab of a patient admitted to the haematology clinic and from the bed rail of the same patient. One of the isolates in the B clone was isolated from the whatnot in ADS and the other from the environmental culture sample taken from the bed rail in the nephrology clinic on the same day; their rate of similarity was 97.9%. The C clone with the greatest amount of isolates (35/48; 72.9%) was isolated from each of the wards in which the samples were obtained for the study. This clone was isolated in all (5/5), 75% (3/12 rectal swab, 6/12 environment), 72.73% (4/11 rectal swab, 4/11 environment), 66.67% (2/9 rectal swab, 4/9 environment), and 63.64% (2/11 urine; 2/11 rectal swab, 3/11 environment) of the samples sent from the ICU, plastic surgery ward, haematology ward, ADS, and nephrology ward, respectively. The C clone sample was obtained between November 11 and December 16, 2011. There were three isolates in clone D, one from a wound sample of a patient, one from an environment culture, and one from an environment culture in nephrology ward. In addition, six isolates (8.2%) including more than two bands and at the same time having a similarity of less than 95% with other strains were found to belong to none of the clones. Two of them were isolated from ADS (1/6 urine; 1/6 environment), two from nephrology environment cultures, one from a PCS environment culture, and one from a rectal swab culture of a patient admitted to the haematology ward.

Vancomycin resistance has been reported with gradually increasing frequency around the world since its first report from United Kingdom in 1986 and subsequently in 1987 from the United States. On the other hand, the first vancomycin resistant Escherichia faecium species was detected in Antalya in 1998 and subsequent reports from other regions followed this [19-21].

Isolates have to be identified at the level of strains and features of resistance should be determined to detect the epidemiological characteristics of the microorganisms, followed by the determination of relations between the isolates using molecular epidemiological methods.

Identification of the source and route of dissemination of Vancomycin-Resistant Enterococci (VRE) is helpful for controlling outbreaks [7].

Currently, although various molecular epidemiological methods have been tested in the detection of epidemiological characteristics of Vancomycin-Resistant Enterococcus faecium (VRE) outbreaks in particular, the Pulsed Field Gel Electrophoresis (PFGE) method is accepted as the “gold standard” due to its reproducibility, high rate of differentiation, and quantifiable results. This method is extremely beneficial in defining the outbreak strain, amount of distribution and source in hospital infection outbreaks developing by bacteria [22].

This study was presented at the 8th National Molecular and Microbiology Congress, Ankara, June 4-7, 2014.