A suitable animal model is essential in understanding a condition caused by microorganisms. In this study in order to study the changes in haemorrahgic septicaemia caused by Pasteurella multocida serotype B, Sprague-Dawley (SK/WDY) rats were immuosuppressed with dexamethasone and challenged with P.multocida serotype B:2. The animals were monitored/inspected twice daily. Any changes in behaviour, movement, eating and development of any signs and symptoms were recorded. Immune-suppressed rats showed signs of haemorrahge and lesion in the lungs.

Haemorrhagic septicaemia (HS) caused by Pasteurella multocida (P.multocida) is a disease which is acute, febrile and lethal. The condition sets in rapidly and is capable of killing susceptible animals in less than 36 to 48 hours [1]. Livestock, especially cattle and buffaloes are of significant economical importance to many countries in the world. In several Asian and African countries, significant foreign exchange and earning is from livestock. [2]. Moreover, to profit from cattle breeding operation, it is important to know about their diseases, how to control and treat them [3]. The pathogenicity of HS caused by P. multocida serotype B;2 is not fully understood. It is partly due to the unavailability of suitable animal model to study the changes that occur during the length of the disease [4,5]. The short incubation period of the organism and sudden onset of the disease limit the study. The virulence factors of P.multocida responsible for HS have not been defined and the antigens responsible for natural immunity are also unknown [6]. The most possible route of HS infection in cattle and buffaloes is through to be aerosol or ingestion of feed and water contaminated with saliva and discharges of the infected animals [7].

Mice such as Balb/c and ICR are the most commonly used animals in studies of HS caused by P.multocida [8]. Even though mice have been used extensively in most the HS study, still they are not considered the best models and several researchers have tried different animals to replace mice. In an attempt by researchers [9] goat was used to study proliferation and transmission patterns. SD/WDY rats were used in our study for HS.

Six to eight weeks old pathogen free Spargue-Dawley (SK/WDY) rats weighing between 150-250 g were obtained from the Animal House, Faculty of Medicine, University of Malaya. The animals were housed in individual cages and had commercial feed and sterilized water ad libitum.

Immune-suppression of the rats

The animals were divided into two major groups, Group A received dexamethasone as immune-suppressant and Group B received normal saline. Each of these group made up of two subgroups, a control group (normal saline) with no bacterial inoculation, and the other group was inoculated with 109 cfu PMB 202 (PMB group), respectively.

Animals in Group A received 0.2 ml of dexamethasone (0.33mg/kg body weight) on the first day and 0.1ml (0.65 mg/kg body weight) once daily on subsequent days. The animals were monitored twice daily. Any changes observed in behaviour, movement, eating and development of any signs and symptoms were recorded. For haematological studies, blood samples were collected from the rats before beginning the experiment and then daily throughout the experiment period.

Blood samples were collected from the tail of the rats on day zero that is, before vaccination, day one and once-aweek for hematological analysis, total and differential white blood cell count. Blood sample was collected in a sterile tube, 500μl of blood was added to 950μl of Turks solution, mixed, loaded into a Neubaur chamber and counted under microscope. Differential WBC count was performed by making a smear of blood and then stained with Leishman stain for 10 minutes.

Rats were sacrificed at the end of the experiment for gross and histopathological analysis. Animals were euthanized by diethyl ether. Lungs, liver and kidneys were collected and fixed in 10% formalin, trimmed off their adhering tissue before being processed. The tissue samples were processed in an automated tissue processor (Leica TP1020) for about 15 hours. Tissues were then embedded into paraffin blocks, sectioned at 15μm thickness and stained with haematoxylin and eosin.

All values were reported as mean + S.E.M. The statistical significance of differences between groups was assessed using one-way ANOVA. A value of p<0.05 was considered significant.

On day 1 and day 2, the immune-suppressed and P.multocida serotype B202-challenged Group A rats did not present any significant visible signs. However, on day 3, the first sign of lesion around the eyes were evident. The lesions increased in size on the same evening and on the next day. However, no other signs of illness were detectable. On day 4, the lesions around the eyes had worsened and the rats were sluggish, weak, had loss of appetite and were very reluctant to move and died on the following day. A few of them were euthanized and sacrificed. Gross appearance of the lungs showed sign of haemorrhage and lesion in rats injected with dexamethasone & infected with P. multocida serotype B202 (Figure 1). Conversely, in control animals (immune-suppressed and challenged with normal saline), no significant changes in their behaviour other than thickening and roughness of their hair coat were noticed.

On the other hand, animals of Group B which were not immune-suppressed but challenged with the same dose of P. multocida serotype B202 did not show any lesion around the eyes or any sign of weakness. They were monitored for 10 consecutive days and then sacrificed. The control animals of the sub-group with normal saline did not show any signs and symptoms. At the end of the experiment animals were sacrificed; lungs, liver, hearts and kidneys were collected for histhopathological studies.

WBC count of Group A rats showed leucocytosis on day 1, which was increased on day 2 and day 3, but slightly decreased on the following days. Animals challenged with P. multocida serotype B202, there was no significant difference seen between the two challenged groups. WBC differential count showed neutropenia and lymphocytosis . Animals treated with normal saline did not show any significant difference in the leucocytes count. WBC count in animals of Group B (not immune-suppressed) initially increased but later reduced to normal (Table 1).

The gross pathological study of the P. multocida serotype B202 challenged immune –suppressed rats showed severe lesion in the lungs (Figure 1). However, no such lesions were evident in the lungs or any other organs in Group B animals. 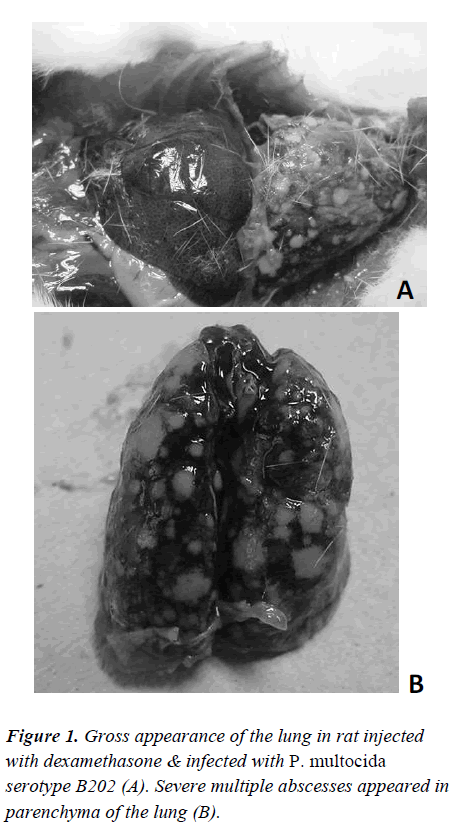 Figure 1: Gross appearance of the lung in rat injected with dexamethasone & infected with P. multocida serotype B202 (A). Severe multiple abscesses appeared in parenchyma of the lung (B).

Histopathological study revealed that the immunuesuppresed rats developed similar signs and symptoms similar to the mice inoculated with P. multocida serotype B202. Whereas the rats which were not immunesuppressed did not show any signs or symptoms related to HS after challenge with P. multocida serotype B202. The immune-suppressed rats however, showed signs of weakness, sluggishness and had lesions around the eyes and succumbed to death the following day. Histological study revealed signs of haemorrhage in the lung, kidney and liver tissues (Figure 2). 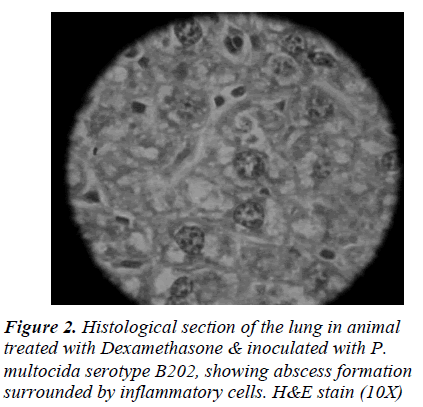 Balb/c and ICR mice used as animal models for the study of P. multocida were especially concentrated on virulence, pathogenecity and immunological responses. Mice showed similar signs and symptoms, responded to that of the natural host, buffalo and shown to be useful tool in HS study [8]. Swiss Webster mice were also shown to be susceptible and similar findings were seen. [10].

The easy availability and cost effectiveness have made mice a suitable model for these studies. Conversely, the amount of blood obtained from mice is too little to perform haematological and bacteriological studies together. Since the animal dies within 36 hours following injection of the organism, the histopathological changes and other effects during the period of infection are not convincingly studied [8].

In search of different animal model, there have been several attempts made to find an alternative animal for studying HS caused by P. multocida. In one such study, goat was used [11] where several routes of inoculation of the organism were tried. Previous study on immunesuppressed SD/WKY rats showed similar signs and symptoms to that of the mice when challenged with parental strain of P. multocida serotype B [12]. Dexamethasone is a member of the glucocorticoid class of hormones; they are catabolic steroids which are antiinflammatory and immune-suppressive in nature [13]. Dexamethasone as a drug has long been used in the treatment of various conditions and disorders in humans and animals [14,15]. In high doses it causes immunesuppression and based on this fact dexamethasone was used in this study. Dexamethasone has been used in various P. multocida studies [4]. In an earlier study, dexamethasone was used [12] where it was shown to be leucopenic and as the disease progressed, there was leucocytosis followed by leucopenia. Recovery of the P.multocida was achieved by taking culture swabs from several organs.

HS is a peracute septicaemia and the route of entry is not very well defined, causing the death of the animal within 37 to 48 hours [8]. The symptoms are high fever, shaking, depression and reluctance to move [16]. The onsets of these signs are rapid and it is shown to be similar in mice and cattle. In this study similar signs as mentioned above were seen, hence rats can be used as an alternative model for HS study if they are immune-suppressed and kept under stress.

In conclusion, this study showed that P.multocida serotype B:2 caused similar signs and symptoms in immune-suppressed rats. The first signs were the classical sluggishness followed by lesions around the eyes of the rats. The condition of the rats deteriorated and finally the rats succumbed to death. The gross pathological study revealed clear sign of haemorrhage and lesion in the lungs.

Expenses of this investigation were defrayed by ERGS grant 600-RMI/ERGS 5/3 (26/2011). We are thankful to Professor Dr Amar Chatterjee for reviewing this manuscript.