Methods: Keratoconus and non-keratoconus control corneas were collected from patients volunteered in the West China Hospital. 16 corneas from male patients diagnosed with keratoconus and 9 control corneas from non-keratoconus males were subjected to immunohistochemical staining. The expression of 4 sex hormone receptors, progesterone, androgen and estrogen receptor alpha and estrogen receptor beta was evaluated using their specific antibodies.

Gender and age predilections have been found in many ocular conditions, which support a potential role of sex hormones in maintaining the eye health [1]. Eye disorders such as agerelated Macular Degeneration (AMD), idiopathic full-thickness macular hole, glaucoma, cataract, and even the dry eye have been constantly found associated with gender or age in many studies [2-8]. Hormone replacement therapy has been reported to ameliorate some of the eye disorders [9].

Keratoconus is a non-inflammatory disorder that results in thinning in central and paracentral areas of affected corneas, which consequently leads to astigmatism [10]. The pathogenesis of keratoconus is still elusive. Gender and age related differences are observed in keratoconus patients. During the past decade, studies have revealed a higher occurring frequency of keratoconus in males than in females and the onset of this disorder begin mainly in adolescence [11-15]. Sex hormone receptors have been found to be expressed in corneas where they regulate the corneal functions [16-18]. We hypothesized that there was a connection between keratoconus and sex hormone receptors. To examine this hypothesis, we performed Immunohistochemistry (IHC) analysis against four sex steroid receptors, Progesterone Receptor (PR), Androgen Receptor (AR), Estrogen Receptor alpha (ERα), Estrogen Receptor beta (ERβ) with keratoconus and normal corneas collected from West China Hospital. Our results demonstrated that the expression of progesterone receptor was downregulated and the androgen receptor expression was upregulated in keratoconus corneas, while ERα and ERβ showed similar expression levels in keratoconus and normal groups.

The human corneas were collected from donors who volunteered their corneas and gave consent to use their corneas for this research. The keratoconus corneas were harvested during penetrating keratoplasty. While the non-keratoconus control corneas were obtained from ocular trauma victims with intact corneas who underwent ocular enucleation. All the patients were operated under systemic anesthesia.

In penetrating keratoplasty, the recipient cornea was trephined with a Hessburg-Barron suction trephine. The anterior chamber was then entered with a disposable sharp blade followed by removing the recipient corneal button with the curved corneal scissors. In ocular enucleation, the cornea with 2 mm sclera rim was cut with the curved corneal scissors. And then a 7.5 mm corneal button was punched out using the Barron donor punch. The samples were fixed in formalin immediately and sent to Department of Pathology for paraffin embedding. This protocol was approved by the Institutional Review Board of West China Hospital, Sichuan University.

Immunohistochemistry (IHC). Immunohistochemical staining was performed on all specimens with a single application for each antibody to minimize procedural variations. All the human cornea tissue slides were sectioned with thickness of 2 mm to 3 mm using a microtome. Slides were deparaffinized in xylene and hydrated through graded alcohols. For antigen retrieval, sections were autoclaved in citric acid buffer (pH 6.0) at 121°C for 10 min. The sections were treated with 0.3% hydrogen peroxide in methanol for 30 min at room temperature to block endogenous peroxidase activity and incubated with 5% Bovine Serum Albumin (BSA) in 50 mM Tris-buffered saline (pH 7.4) containing 0.05% Triton X-100 for 1 h at room temperature to block non-specific protein binding site. The sections were then incubated with the primary antibodies at specific dilutions overnight. The AR and PR antibodies (Rabbit polyclonal, GeneTex USA) were diluted at 1:100 and the ERα and ERβ antibodies (Rabbit polyclonal, GeneTex USA) were diluted at 1:50 and 1:400 respectively. The staining was visualized using EnVision System-HRP (DAB Dako Cytomation, USA). Harris’s hematoxylin was applied for 15 sec and then washed with distilled water. The sections were gradually dehydrated with 50%-100% ethanol and xylol. Coverslips were affixed using Entellan for analysis under an optical microscope.

All cases were evaluated by two persons in a double blind manner. Five view fields were chosen randomly at 40 × 10 magnification and at least 100 cells were required for scoring in each field. Cases were scored as 1, 2, 3 or 4 corresponding to positive nuclei rates of 0-25%, 25-50%, 50-75% and 75-100% respectively. Scores from 1-4 for staining intensity were also evaluated for each field. Scores for positive nuclei rates and staining intensity were averaged to produce a final score for each field. The score for one slide is obtained by averaging the scores of five independent fields.

All the analysis was performed using SPSS 11.5. To assess statistical significance, we used the Mann-Whitney U test to compare keratoconus group with the control group and P value<0.05 was considered statistically significant.

Age distribution of the corneas used for IHC analysis 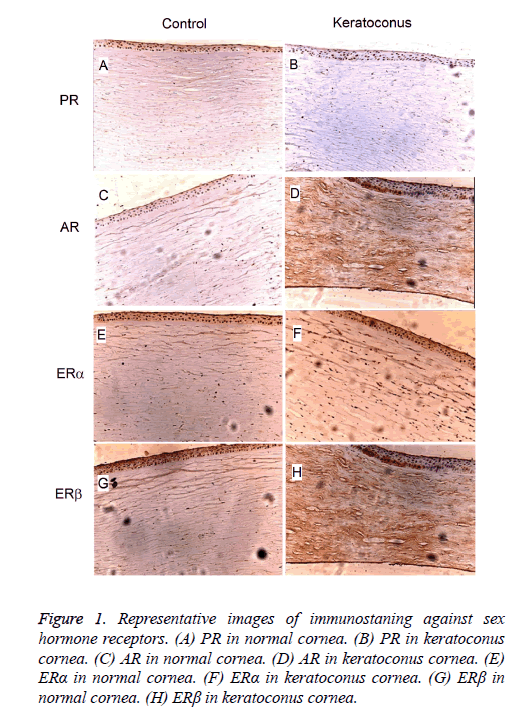 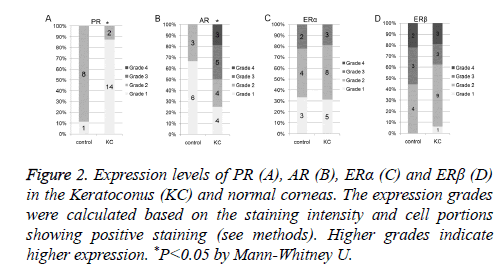 Figure 2: Expression levels of PR (A), AR (B), ERα (C) and ERβ (D) in the Keratoconus (KC) and normal corneas. The expression grades were calculated based on the staining intensity and cell portions showing positive staining (see methods). Higher grades indicate higher expression. *P<0.05 by Mann-Whitney U.

In the current study, we found that the expression of sex hormone receptor PR was downregulated while expression of AR was upregulated in keratoconus corneas. The upregulation of AR in keratoconus corneas is consistent with the finding that conical change in cornea is androgen dependent in the mouse model of keratoconus [19]. Keratoconus occurs more frequently in males who have higher levels of PR and lower levels of AR in the body than the females [11-13,20]. Together with these epidemiologic results, our studies support that PR and AR might be involved in the pathogenesis of keratoconus. However, an alternative explanation that alteration of the sex hormone receptor expression is manifestations of keratoconus is also plausible.

Corneal biomechanical parameters and central thickness are reported to change along with the oscillations of estrogen level during the menstrual cycle in female [21-23], and hormone replacement therapy are found to increase corneal thickness [24]. The female hormone estrogen has been widely reported to modulate the tumor microenvironment [25]. Recently, female hormone estrogen is reported to be able to inhibit collagen degradation [26], which provides a plausible explanation for the fact that keratoconus occurs less frequently in women. Though our results suggested that the expression of the ERα and ERβ were not significantly altered in the keratoconus corneas, it is still to be determined if their activity is changed in keratoconus corneas.

This study was supported by China National Natural Science (Grant No. 31200711).