Coronary artery disease is the single most important disease entity in terms of both mortal-ity and morbidity in the entire world population. Both men and women between the age group 40 to 60 years are susceptible to it. Prevention of coronary artery disease can be ap-proached in many ways including healthy promotion campaign, specific protection strate-gies, life style modification programs, early detection and control of risk factors and con-stant vigilance of emerging risk factors. Novel factor like plasma homocysteine has been re-cently recognized as independent risk factor for coronary artery disease. So, an attempt has been made to evaluate the risk factor for coronary artery disease in diabetics. In the present study, 50 diabetic patients with raised glycosylated haemoglobin in the age range of 30-60 years and equal number of age and sex matched normal healthy subjects (control) were re-cruited. The levels of plasma homocysteine in diabetic patients was found to be significantly increased (p<0.001) with respect to control group. The study therefore suggests the impor-tance of assessing plasma homocysteine (primarily atherogenic marker) along with other routine investigations in diabetic patients in addition to primary and secondary preventives measures to migrate the devastating consequences of diabetes leading to coronary artery disease.

Diabetes is the chronic disorder resulting from a number of factors in which an absolute or relative deficiency of insulin or its function occurs. It has emerged as a major public health problem in India. It is projected that by the year 2025, India alone would have 57 million diabetics mainly of type-2 diabetes constituting 90% of the diabetic population [1,2]. Literature reports revealed that the risk of coronary artery disease (CAD) in Indian is 3 times higher than Chinese and 20 times higher than in the Japanese. The most common and life threatening disorder that besets diabetic subjects is CAD [3]. At the threshold of this millennium CAD is looming large as a new epidemic afflicting Indians at a relatively your age.

Atherosclerosis occurs due to a number of factors in diabetic individuals, Insulin resistance and elevated lipid levels that are common in diabetes are primary trigger atherosclerotic injury. It is also suggested that endothelium in diabetic arteries is more prone to atherosclerotic injury due to decreased production of endothelial nitric oxide known to be antiatherogenic and increased production of plasminogen activator inhibitor [4]. Irrespective of the ethnic background, the risk factor of CAD among Indian diabetic population is two to four times higher than that of non-diabetic subjects [5]. Indians being vulnerable or susceptible to CAD warrant an indepth study on risk factors leading to CAD in diabetics patients.

Several studies [6,7,8] conducted in different parts of the World on normal healthy subjects, have reported that the elevated levels of plasma homocysteine are associated with CAD as an independent of other risk factors. More-over, very few studies have been conducted in India to the best of our knowledge and also the increasing prevalence of CAD due to changing lifestyle, gave us an impetus to evaluate the changes in plasma homocysteine in diabetics. Therefore, the present study made an attempt in this direction to study the new independent risk factor that is plasma homocysteine for CAD in diabetic patients.

Subjects
The present study was conducted in the department of Biochemistry, Govt. Medical College -Amritsar on 50 Type-2 diabetic patients of both sexes in the age range of 30 - 60 with raised HbA1c admitted to various wards, Department of Medicine, Guru Nanak Dev Hospital attached to Govt. Medical College –Amritsar and control group of the study consists of equal number of age and sex matched normal healthy subjects. All subjects were vegetarian, non-smoker and non-alcoholic and there was no positive family history of CAD in these subjects.

Blood Sampling
5ml of peripheral venous blood was collected by vein puncture using a dry, disposable syringe between 8 AM- 9AM after an overnight fast from both the groups (Control and Type-2 diabetic patients). Blood was collected in sterile tubes containing a mixture of potassium oxalate and sodium fluoride in the ratio of 3:1 and was centrifuged at 3000rpm for 15minutes. The plasma so, obtained was used for the estimation of glucose and homocysteine levels. 2ml of blood sample was collected separately in EDTA vial for the analysis of HbA1c. Samples were stored at 4°C and used for various biochemical assays.

Statistical Analysis
Numerical data were performed as mean values ± S.D. The statistical significance was evaluated by students “t” test and the difference between diabetic patients and normal health subjects (control) was considered significant at p<0.05.

Hyperglycemia (excessive glucose), is still considered the principal cause of diabetes complications. The increased amount and duration of glucose in the blood allows more glycosylation to occur, not only with haemoglobin, but also with proteins and attributes to the formation of sugar-derived substances called advanced glycation end products (AGEs). AGEs formation is markedly accelerated in diabetes because of the increased availability of glucose. AGEs are a heterogeneous group of molecules formed from the nonenzymatic reaction of reducing sugars with free amino groups of proteins, lipids, and nucleic acids. The initial product of this reaction is called a Schiff base, which spontaneously rearranges itself into an Amadori product, as is the case of the well-known HbA1C. Animal and human studies have shown that AGEs play a significant role in the formation and progression of atherosclerotic lesions. Increased AGE accumulation in the diabetic vascular tissues has been associated with changes in endothelial cell, macrophage, and smooth muscle cell function [11,12]. So, in the present study, we recruited those patients who had raised HbA1c levels as a marker of uncontrolled diabetes (Figures 1,2). The parameter HbA1c being a measure of mean blood glucose over a period of approximately 8-10 weeks with its level remaining unaffected by short –term fluctuations in blood glucose levels. Moreover the level of HbA1c is proportional to both the average glucose concentration (Figures 1,2) and life span of the red blood cells in circulation and micro vascular complications of diabetics are also associated with the concentration of HbA1c [13,14]. The diabetic condition contributing for initiation and progression of micro and macro vascular complications in diabetics [11]. Of all, cardiovascular complications are the leading cause of mortality and morbidity in diabetics. Framingham heart study (1974) demonstrated a direct association between diabetes and heart failure [15]. 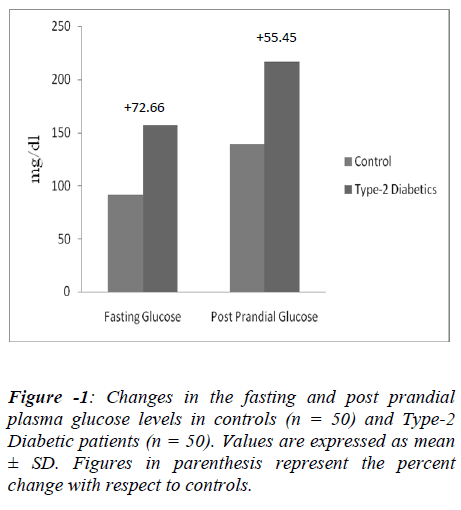 Figure 1: Changes in the fasting and post prandial plasma glucose levels in controls (n = 50) and Type-2 Diabetic patients (n = 50). Values are expressed as mean ± SD. Figures in parenthesis represent the percent change with respect to controls. 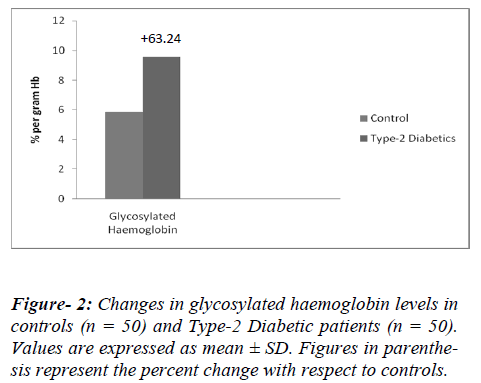 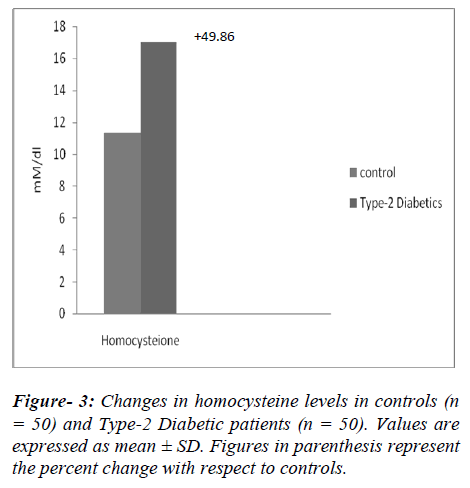 Figure 3: Changes in homocysteine levels in controls (n = 50) and Type-2 Diabetic patients (n = 50). Values are expressed as mean ± SD. Figures in parenthesis represent the percent change with respect to controls.

Therefore, a significant increase (p<0.001, 49.86%) of homocysteine level in type-2 diabetics (Figure-3) in present work could be responsible for the pathogenesis of CAD in diabetes patients.

As India is harboring the largest number of diabetics in the World and Indian being more susceptible to CAD than any other ethic group, it becomes necessary to implement measures for the management of this dual epidemic. It is also necessary to initiate primary preventives measures like reduction in serum lipids, avoiding smoking, increasing the intake of fruits and vegetables, physical activity, maintenance of healthy body weight and secondary preventives measures like control of hyperglycemia and hypertension to ameliorate the devastating consequences of diabetes leading to CAD.