Endotracheal tube obstruction by blood, mucus material or kinking is not uncommon however endotracheal cuff herniation is an extremely rare condition. It could easily be overlooked and may cause airway obstruction. Bronchoscopy is the gold standard method of diagnosis. In this case report, we aimed to present an unusual case of intraoperative endotracheal tube cuff herniation in a 62 year-old patient scheduled for nephrectomy.

Endotracheal intubation is generally performed to protect airway throughout surgery using an endotracheal tube (ETT). Obstruction of an ETT is a life-threatening event. Mucus, blood clot and kinking of ETT may cause airway obstruction as well as structural defects [1]. Various manufacturing defects of ETT are defined. It was reported that ETT tube herniation [2], dissociation of the inner layer [3], dissection of the inner layer [4], kinking of the ETT [5] and plastic membrane of tube connector [6] might cause severe airway obstruction. If the cause of high airway pressures during operation is not found and solved, this may lead serious problems. Nowadays, fibre optic bronchoscopy (FOB) is the gold standard of tracheobronchial tract visualization. It is not only used for diagnosis but also treatment [7]. In this case report, after obtaining a written consent from the patient we aimed to present an airway obstruction occurring due to ETT cuff herniation following inflation of ETT cuff in a 62 year-old patient who was scheduled for nephrectomy operation in left lateral decubitus position.

A 62 year-old male (88 kg, 173 cm) with a renal tumor was scheduled for left nephrectomy operation. His preoperative evaluation was revealed as ASA 1 (The American Society of Anesthesiologists). He was a nonsmoker with no history of respiratory disease. After premedication with IV midazolam (3 mg) and placement of routine monitoring, anesthesia was induced with 200 mg propofol, 100 mcg fentanyl, 50 mg rocuronium. An 8.0 mm I.D. cuffed reinforced tube (Bıçakçılar, İstanbul, Turkey) was used for intubation. End tidal CO2 was detected on the monitor and the placement of the tube was confirmed by auscultation of bilaterally equal breathing sounds. Endotracheal tube was stabilized at the level 21 cm. Cuff inflation was provided with 10 ml air till the leakage sound ended. Anesthesia was maintained with 1-2 MAC sevoflurane, in a mixture of 50% oxygen and air; and with infusion 0.1 mcg/kg/min remifentanyl.

After the patient was placed in the left lateral decubitus position and ventilation was checked once again, the operation was started. Two hours after initiation of the surgery, a leakage sound was heard from the patient’s mouth with a peak inspiratory pressure (PIP) of 15 cmH2O and cuff was inflated with an additional 5 ml air; since it was considered to be related with a leakage from the cuff. After that; PIP was noted to have increased suddenly from 15 cmH2O to 50 cmH2O. Manual ventilation revealed high airway pressure. Respiratory sounds were bilaterally decreased on auscultation. Endotracheal tube was checked with a suction catheter. Two unsuccessful trials of advancing the aspiration catheter lead us to consider high peak pressure was caused by endotracheal tube obstruction.

Deflating the cuff was unsuccessful. Since reintubation of the patient in left lateral decubitus position might be dangerous; a FOB was planned. During FOB, at the level of 30 cm of the tube, a white, bright, air-filled object was detected obstructing almost whole lumen of the tube (Figure 1). The object was considered as ETT cuff. Bronchoscope was advanced further, passed through the cuff. The trachea and bronchia were detected to be intact. It was retracted to the level of ETT cuff, its tip was elevated to the ETT cuff. We detected that that herniation dissolved. Bronchoscope was completely removed and airway pressure was noted to be 18 cmH2O. A second look FOB was performed. ETT lumen was detected to be open and remainder of the procedure proceeded uneventfully. Following the operation patient was extubated without a problem. After extubation on inspection of the removed ETT reinflated with 15 cc air, herniation was visible (Figure 2). Postoperative period was uneventful and the patient was discharged on 6th day after operation. 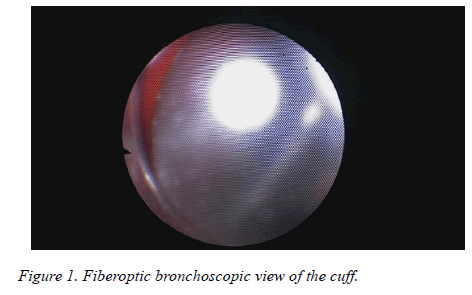 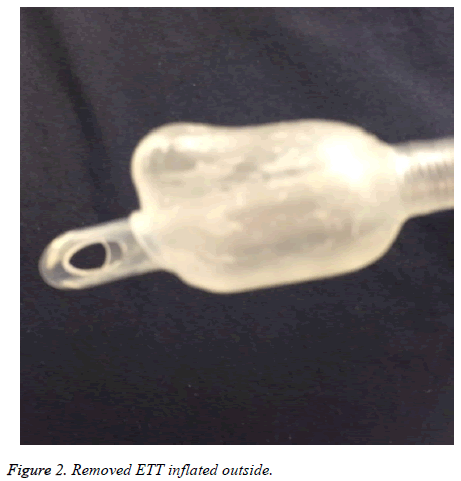 Endotracheal tube obstruction by blood, mucous material or kinking is not uncommon. However; obstruction by foreign body is extremely rare [1]. It is crucial to differentiate reasons of obstruction from other reasons such as; bronchospasm, pneumothorax, chest wall rigidity [8]. Physical examination is the most important tool in ruling out these reasons in case of an intraoperative emergency. Auscultation and respiratory pressure curves are valuable. Our patient had sudden increase in peak pressure and a decrease in time to reach peak pressure during inspiration, which lead us to consider it to be caused by a proximal obstruction.

In order to rule out the most common reasons of obstruction such as blood or mucous material, initial control was performed via a suction catheter. Two unsuccessful trials of advancing the catheter and aspiration led us to consider it to be caused by obstruction of endotracheal tube. It was reported that herniation of the cuff of the tube [2], dissociation of the inner layer [3], dissection of the inner layer [4], kinking of the endotracheal tube [5], plastic membrane of tube connector could cause severe airway obstruction.

Bronchoscopy was considered to be the most efficient method in differentiating the reasons of obstruction. Bronchoscopy revealed endotracheal tube cuff herniation. Herniation might be due to unsuitable material or its structural drawback. The lack of success in spite of deflating the ETT cuff was considered to be related with the possible squeezing of the herniated part between mucosa and the tube leading to obstruct airway. We believed that pushing the herniated part upwards lead to overcome the pressure and herniation. Consequently, endotracheal tube related airway obstruction is difficult to diagnose and is a life threatening situation. In order not to cause late diagnosis FOB should be kept in mind and performed quickly.