#Wei Qian and Pengcheng Jiang contributed equally to this work.

Aging is the accumulation of molecular and cellular defects leading to dysfunction of tissues, organs, and systems whose obvious feature is decline of muscle mass and strength. The majority of energy provided to skeletal muscle is produced and cycled in form of ATP which stems mainly from oxidative phosphorylation occurring at the electron transport chain(ETC) of the mitochondria. Over the years, aging theory has been extended to the “Mitochondrial theory of aging” and substantial evidence has emerged from bioenergetic, biochemical and genetic studies to lend support to this theory. Although several lines of evidence support the role for substantial declines in enzyme activity in the etiology of aging, it remains unclear if the expression of polypeptide components of the ETC complexes alter with aging. Here, we determined to observe the morphology change and quantify the expression of several enzymes in ETC and cytoplasm of mitochondrial. Taking these findings together, we suggest that the altered morphology and decreased expression of enzymes in mitochondrial may contribute to aging in human muscles.

Aging is a complex process driven by genetic, environmental, and cellular factors, including the accumulation of molecular and cellular defects leading to dysfunction of tissues, organs, and systems [1]. An obvious feature of aging is decline of muscle mass and strength, and these declines accelerate with advancing age [2]. The skeletal muscle has the great oxygen consumption in the body at rest reflecting its huge metabolic turnover and energetic demands. The majority of its energy is produced and cycled in form of ATP which stems mainly from oxidative phosphorylation occurring at the respiratory chain of the mitochondria [3].

Mitochondria are crucially important cellular organelles which provide most of energy to the cell with and regulate several signaling cascades. Mitochondria transduce energy from substrates through the tricarboxylic acid (TCA) cycle and the electron transport chain (ETC) to generate ATP. A central role for mitochondria in aging was first proposed by Denham Harman in 1972 [4], based on his original theory that mitochondria are both the main source and a major target of free radicals, and the accumulation of damage with time leads to aging. In recent years, aging theory has been extended to the “Mitochondrial theory of aging” gradually. It has been reported that declines in skeletal muscle mitochondria play a primary role in muscle loss [5]. It was also reported that activities of mitochondrial respiratory enzymes and mitochondrial ATP production rate were declined with age in muscle [6]. However, most studies focused on the activity alteration of mitochondrial respiratory chain complexes in muscles with aging, the expression level alteration of enzymes in ETC are still unclear. In this paper, we determined to observe the morphology change and quantify the expression levels of some enzymes in ETC and cytoplasm of mitochondrial in human strap muscles.

Fresh muscle were cut into small pieces of 1mm3 immediately and fixed in 5% glutaraldehyde. Samples were sent to Analysis and Testing Center of Nanjing Medical University. Five separately samples from each group were observed and the characteristic morphologic changes of muscles from young and the old groups were recorded.

Fresh muscle were fixed in 4% paraformaldehyde and embedded in paraffin. The blocks were cut into 4μm slices. Slices were baked in 60°C for 30min and dewaxed by xylene. After dewaxing and antigen unmasking, endogenous peroxidases were blocked by a solution of 90% methanol/3% H2O2 for 15 min at room temperature (RT). Then the slides were blocked in blocking buffer for 20 minutes. The primary antibody were applied overnight at 4°C, after washing the biotin labeled second antibody were added for 20min, then the SABC were added for 20min. Finally, Add DBA immediately to slides and wait for color change. All the sections were cover slipped with neutral balsam, viewed with an Olympus microscope, and analyzed using Image J software.

Fresh muscles were storage immediately in -80°C when removed until use. Muscles were cut into small pieces and grinded with liquid nitrogen, then lysed with RIPA. Muscle lysates were electrophoresed on SDS polyacrylamide gels and transferred onto polyvinylidene difluoride membranes (Merck Millipore, USA). Membranes were blocked with 5% (w/v) BSA in TBST for 1 h at room temperature and incubated overnight with primary antibodies at 4°C, followed by HRP-conjugated second antibodies. The immunoreactive bands were detected by chemiluminescence (ECL Plus, Millipore) and relevant blots were quantified by densitometry using the accompanying computerized image analysis program.

Preparation of RNA and cDNA synthesis

Fresh muscles were cut into small pieces and grinded with liquid nitrogen, then lysed with Trizol according to the manufacturer's instructions. Two micrograms of total RNA was reverse transcribed to cDNA in a total reaction volume of 40 μl containing 5× buffer, dNTPs 10 mM each, random hexamers 10 μM, RNAsin 80 units and 200 units of MMLV reverse transcriptase. Samples were incubated for 10 min at 25°C, 60 min at 42°C, and then stored at -20°C.

Statistical analysis was performed using Prism5 (Graph- Pad Software). All experiments were performed at least in triplicate. Results were expressed as the mean± 95% confidence interval (CI). Statistical differences between groups were compared By Student’s t-test to identify significantly different results. Values of P < 0.05 were considered to be statistically significant.

To verify that mitochondria are involved in senility of muscle, we carried out morphological studies by electron microscopy. As demonstrated in Fig. 1, the mitochondrion from the young group showed normal structure and compact cristae. Compared with young muscles, mitochondria in old muscles appeared swelled, and the cristae were decreased and disordered, vacuolization of the matrix were also apparent (Fig. 1). 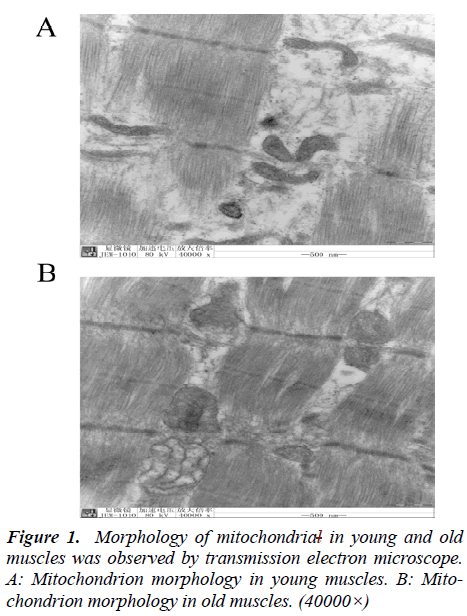 NADH dehydrogenase (ubiquinone)1 alpha subcomplex 1 (NDUFA1), succinate dehydrogenase complex，subunit B (SDHB), cytochrome b (Cytb), cytochrome c oxidase (COX, vacuolar-type H+-ATPase (V-ATPase H), malate dehydrogenase (MDH) and hydroxyacyl-Coenzyme A (CoA) dehydrogenase, short chain (HADHSC) were detected by RQPCR. The expression levels of NDUFA1, SDHB, COX and V-ATPase H were significantly higher in young muscles compared to old muscles（P<0.05. Expression Cytb was higher in young muscles than in old muscles, but the difference was not statistically significant. There were no statistical significance in MDH and HADHSC expression level between young muscles and old muscles (Fig. 2A). To confirm the RQ-PCR results, we detected the seven enzymes by Western blot. 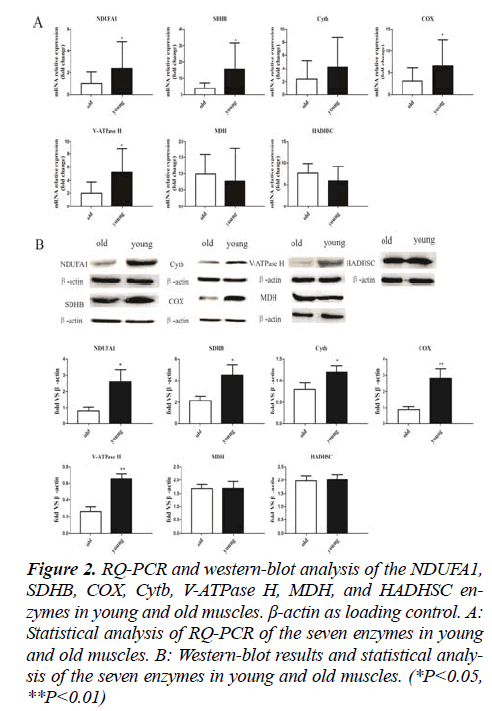 The western blotting analyses yielded results that were similar with the RQ-PCR data while the difference of Cytb was statistically significant (Fig. 2B).

In order to display enzyme positgioning more intuitively in the tissue, the seven enzymes were detected by Immunohistochemistry. It was shown that the expression levels of NDUFA1, SDHB, COX, Cytb and V-ATPase H were significantly higgher in young muscles compared to old muscles (P<0.05）. There were no statistical significance in MDH and HADHSC expression level between young muscles and old muscles (Fig. 3). These results were consistent with the western blot data. 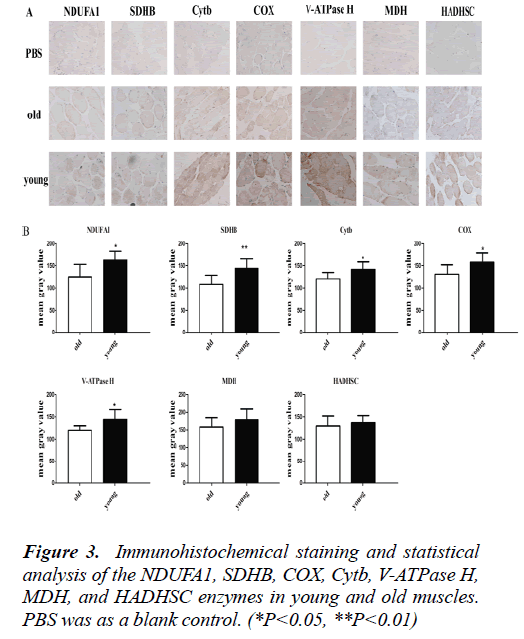 Mitochondrial ATP production mainly relies on electron transport chain. Electron transport chain is composed of NADH- coenzyme Q1 reductase (complex I), succinodehydrogenase (complex II), ubiquinone cytochrome c reductase (complex III), cytochrome c oxidase (complex IV) and ATPase (complex V) . The ETC receive electrons from reducing equivalents NADH and FADH2, generated by dehydrogenase activity in the TCA cycle. Electrons move toward compounds with more positive oxidative potentials and the incremental release of energy during the electron transfer is used to pump protons (H+) into the intramembrane space. During the electron transfer, protons are always pumped from the mitochondrial matrix to the intermembrane space, resulting in a potential of ~150–180 mV. Proton gradient generates a chemiosmotic potential, also known as the proton motive force, which drives the ADP phosphorylation via the ATP synthase [12,13]. At present, many researches focused on the relationship of mitochondrial respiratory chain activity dysfunction and aging and found that most of the ETC activity decreased with aging [14,15]. While, research on the expression level alteration of mitochondrial respiratory chain enzymes is less. In our study, we found expression level of several enzymes in respiratory chain decreased in old muscles, these results might suggest that the decreased expression of enzymes in the respiratory chain contributed to reduced activity of ETC, finally leading to mitochondrial dysfunction and decreased production of ATP, accelerating the ageing process. However, it was reported that mitochondrial content was not significantly different by citrate synthase activity or ETS complexes I– V in skeletal muscles between young and elder people [5], this might dependent on researched enzyme were not exactly same.

The most prominent roles of mitochondria are to produce the energy currency ATP of the cell through respiration, in addition to this, mitochondria also participate in calcium homeostasis, oxygen sensing, fatty acid oxidation, signal transduction as well as, steroid and heme synthesis, oxidative stress and the regulation of apoptosis [16-18]. Therefore, we compared other two enzymes involved in glycometabolism and lipid metabolism. Cytosolic malate dehydrogenase (MDHC) is an important NAD-dependent enzyme involved in glycometabolism that catalyzes the formation of oxaloacetate and NADH from L-malate and NAD. It’s located in matrix of mitochondria, is a symbol enzyme of matrix. Our data indicates that there is no statistically significance of MDH between young and old muscles. Prior studies have reported that the activity of MDH was reduced in old human dermal fibroblasts (HDFs), suggesting a link between decreased MDH protein levels and aging [19]. While, the inconsistent result may be associated with the different tissue we researched. HADHSC (hydroxyacyl-Coenzyme A (CoA) dehydrogenase, short chain) is also a mitochondrial matrix protein which exists as a homodimer that participates in lipid metabolism and is essential for the ∫-oxidation of medium and short chain fatty acids. More specifically, HADHSC catalyzes the dehydrogenation of 3-hydroxyacyl-CoAs to their corresponding 3-ketoacyl-CoAs while NAD+ is simultaneously reduced to NADH [20]. Very few studies have been performed to determine the effect of HADHSC in aging. While, in this study we found no statistically significance of HADHSC between young and old muscles, this may indicate HADHSC not play an important role in aging.

In conclusion, our present study suggests that mitochondrial morphology and expression of several mitochondrion enzymes of ETC and matrix altered in old muscles compare with young muscles. These alterations may contribute to mitochondrion dysfunction and play an important role in human aging.

This work was supported by Six talent peaks project in Jiangsu Province (Grant no. 2011-WSN021D), the Social Development Foundation of Zhenjiang City (Grant no. SH2012042) and the Bidding project on medical research in Jiangsu province (Grant No. H201353).

The authors disclose no conflict of interest.