Age differences of morbidity of a right and left sided breast cancer: influence of chronic pathology of internal genitals and reproductive organs surgery

Influence of chronic pathology of internal genitals and reproductive organs surgery (ROS) on a breast cancer (BC) morbidity is actively studied. However results are ambiguous. Especially it concerns ROS [1-4]. Most of researchers consider that with some slip of the tongue of ROS reduces a BC risk [5-10]. But there is no full understanding of fundamental mechanisms of this phenomenon yet. In the context of the vast majority epidemiological and case-control of researches the role of internal genitals in an BC etiology is reduced only to a hormonal factor. However on this aspect there are contradictions too. So, Davelaar et al. using at patients with ROS an estradiol as replacement therapy did not find increase in risk of BC [11].

Nevertheless, influence of ROS is not limited only to change of the hormonal status. By numerous experiments it is shown that ROS leads to functional and morphological changes of a peripheral and central nervous system [12-16]. Thus, considering only a hormonal factor as the main effect of ROS, we unreasonably exclude other important mechanisms of antitumoral resistance.

The tumor laterality remains inexplicable aspect of a BC epidemiology [17-24]. By results of numerous researches it was shown that BC mainly unilateral process (frequency of the bilateral BC only 1-5%). As the BC in many respects has the genetic nature and distinctly depends on a hormonal factor, naturally there is a question: why the tumor arises only in one mammary gland if both mammary glands have equal risk? It is possible to answer this question, having only defined how symmetry of risks is broken and what can promote it.

The theory about possible influence of the status of internal genitals on BC laterality lack clinical confirmation. I.e. in literature we did not find clinical researches with such design. We try to progress in studying of this question. The purpose of this research is an assessment of age differences of morbidity of a right-sided and left-sided BC (i) at the considerable chronic pathology of internal genitals demanding surgical treatment and (ii) after ROS.

The statistical analysis is carried out with use of the programs “Statistica 8.0”, “SPSS Statistics 23”, “Excel”. Comparison of ranks of data was carried out by the Kruskal-Wallis test. Value p<0.05 was considered as the statistically significant.

In group BC-ROS the most often there was a hysterectomy with ovaries - 96 (80.0%) cases, a bilateral ovariectomy was more rare - 24 (20.0%) cases. We have studied reasons of ROS. The bilateral ovariectomy (n=24) and hysterectomy with ovaries (n=24) were carried out with the purpose of surgical castration (n=52; 43.3%); at 41 of them at postoperative histologic research benign diseases of a uterus and ovaries are revealed (polycystic ovary syndrome, uterine fibroids, etc.). In 14 (11.6%) cases the reasons of ROS were malignant tumours of a uterus (n=8) and ovaries (n=6). In other cases the reasons of ROS were benign diseases of a uterus and ovaries (uterine fibroids, endometriosis, polycystic ovary syndrome, etc.) - 54 (45.0%) cases.

Due to the retrospective character of the research we had no possibility to receive the full information on a state of internal reproductive organs of the patients of control group. Quite possibly, these patients also had pathology of a uterus and ovaries. But as it did not demand surgical treatment, it is empirically possible to assume that this pathology was considerably less expressed, than at patients of BC-ROS and ROS-BC groups. 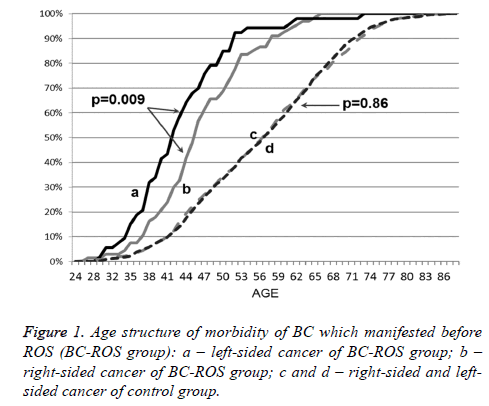 In this group the manifestation of left-sided BC (n=40) happened much later, than among patients of control group (р=0.015). It is also necessary to note, that after 65 years the difference of age structure disappeared (Figure 2). At rightsided BC the age structure of the patients of the group ROSBC (n=43) and control group formally did not differ (р=0.39). However, the attitude of cumulative curves to each other forms "scissors" crossing in the point corresponding to 50 years that allows to single out two periods with a boundary in 50 years. I.e. in the age period before 50 years among the patients of the group ROS-BC the manifestation of the BC occurred significantly later, than among the patients of the control group (р=0.007). However in the age periods after 50 years the manifestation of the BC occurred significantly earlier, than among patients of control group (р=0.03). As a result we see, that at the group ROS-BC the patients with right-sided BC were significantly younger than the patients with left-sided BC (р=0.025). The median of a morbidity of right-sided cancer was 53.0 [47.7; 61.0] years, left-sided cancer - 61.0 [53.0; 65.0] years. 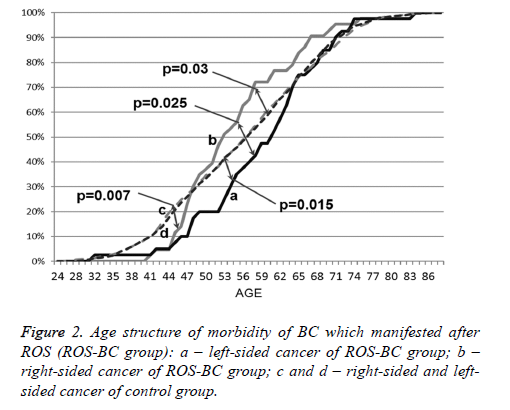 Thus, it is possible to formulate the main conclusions of research:

At the considerable chronic pathology of internal genitals the BC diagnosing in the left breast happens at younger age, than in the right breast.

After ROS because of the considerable chronic pathology of internal genitals the BC diagnosing in the left breast happens at later age, than in the right breast.

The considerable chronic pathology of internal genitals and its surgical treatment is a factor of age differences of morbidity of right and left-sided BC.

The results of analysis of the group BC-ROS allow to assume, that the left breast directly or is indirectly more sensitive to negative influence of a considerable chronic pathology of internal genitals, than right breast. Perhaps, there is a physiological state at which the combination of systemic and local factors defines unilateral decrease of antitumoral resistance of mammary glands and internal genitals are involved in it. Anyhow, as a result we observe that among the women having a considerable pathology of internal genitals, the deficiency of antitumoral resistance in the left breast is formed earlier, than in the right breast.

The author thanks Doctor Poroshenko AB for the help in interpretation of results of research.

The author declares that he has no conflict of interests.