Advanced case of sitosterolemia with a novel homozygous mutation

Sitosterolemia is a genetic lipid metabolic disorder characterized by increased intestinal absorption and decreased biliary excretion of plant sterols. The intestine and gallbladder work to balance plant sterols by ATP-binding cassette sub-family G member 5 and 8 proteins which are encoded by ABCG5 and ABCG8 genes. An eight year old girl who was misdiagnosed with familial hypercholesterolemia for two years, presented later with xanthoma, ecchymosis, easy tiredness, paleness, arthritis and abdominal pain. Her lab tests were: total cholesterol 5.3 mmol/L, hemoglobin 9.4 g/dL, platelet 160 × 1012/L, and CRP 15 mg/L. Specific testing for levels of sterols show very elevated levels of β-sitosterol, stigmastanol and campesterol. Genetic testing for ABCG5 and ABCG8 gene confirmed a novel mutation at ABCG8 gene (NM-022437.2). She was treated with ezetimibe 10 mg once daily. The symptoms disappeared after eight months of treatment although sterols were high. Her brother and sister were tested for β-sitosterol level as well as ABCG5 and ABCG8 gene mutation. Results of her brother and sister were positive for the diagnosis of sitosterolemia of the same mutation.

Sitosterolemia is a very rare lipid metabolic disorder. It is considered as an autosomal recessive genetic disease. Sitosterolemia is characterized by significant elevation of serum plant sterols due to mutations in ATP-binding cassette sub-family G5 (ABCG5) or G8 (ABCG8) genes [1,2]. These mutations lead to an increase in intestinal absorption and a decrease in biliary excretion of plant sterols and cholesterol resulting in high serum plant sterol.

It is believed that hypercholesterolemia in a young child is explained by FH. Although this is the situation in most of the patients, some patients who are treated as FH may present with a progressive deterioration of the symptoms and lifestyle with correction of cholesterol level. The suspicion of sitosterolemia should be highly expected in these cases.

The patient is an 8 year old Jordanian girl, who was born without any perinatal complications. Her parents had a second-degree consanguineous marriage. Her father has dyslipidemia, currently on ezetimibe and her older brother has yellowish skin nodules at Achilles tendon without any established diagnosis. There was no additional phenotype noticed in the family. Her parental history is positive for an aunt who died prematurely due to cardiac disease. The patient is not known to have any disease or health issues.

First, her mother noticed for the first-time small yellowish spots over the back of her knees at age of two years. The mother ignored these spots as she thought it is just a normal skin discoloration.

At the age of five years, the spots became larger in size and the family sought medical advice (Figure 1). After consultation and examination, she had two xanthomas in the extensor surface of each of her knees, irregular in shape and 2-3 cm wide with about 1 cm elevation over the skin. No corneal arcus or xanthelasma noticed. Her lab results are: TC 10.0 mmol/L, LDL 8.0 mmol/L, high density lipoprotein (HDL) 1.1 mmol/L, Triglyceride (TG) 1.5 mmol/L. She was diagnosed with FH and started treatment with high sterol diet (olive oil, nuts and seeds) and avoiding high cholesterol foods to lower the cholesterol level. After that, her TC decreased to 5.4 mmol/L. 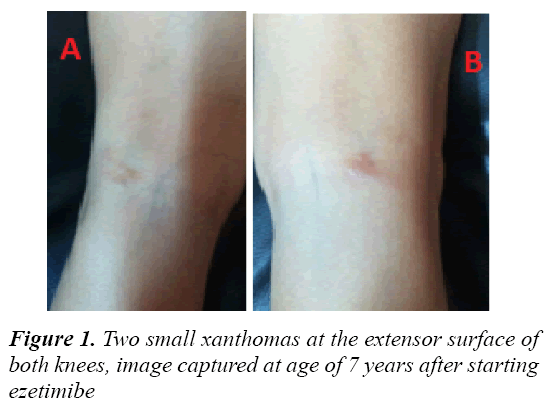 Figure 1: Two small xanthomas at the extensor surface of both knees, image captured at age of 7 years after starting ezetimibe

At six years old, the patient became worse and developed ecchymosis all over the body, easy fatigability, paleness, abdominal pain, arthritis in the knees and elbows and failure to thrive (her weight was 16 kg) (Figure 2). The laboratory works were done (Table 1). Abdominal ultrasound showed splenomegaly. Blood film manifests polycythemia, hypochromic red blood cells and large platelets. Electrocardiogram and echocardiography were normal. She was started on ezetimibe 10 mg once daily. 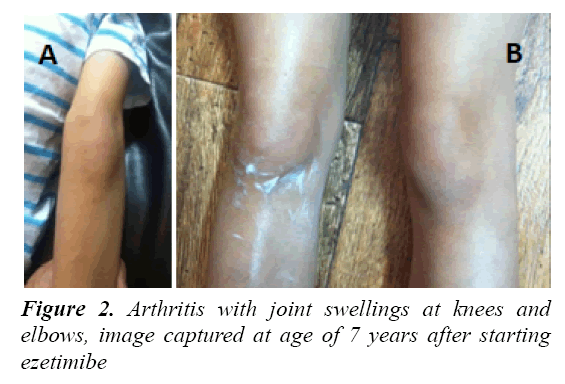 Figure 2: Arthritis with joint swellings at knees and elbows, image captured at age of 7 years after starting ezetimibe

Table 1: Lab findings at presentation time and after ezetimibe treatment

At seven years old, serum analysis for sterols was ordered (Table 2). Genetic testing was done for the patient and for her parents. Results confirmed homozygous ABCG8 gene mutation at (NM-022437.2, exon 7, c.965-1G>C) which is consistent with a genetic diagnosis of sitosterolemia. This mutation was not detected or reported previously in a homozygous state while there are only 6 detected cases in a heterozygous state. Parents were carrier for variant ABCG8 gene (heterozygous). The patient was treated with low sterol diet and continued ezetimibe 10 mg once daily.

After 8 months of ezetimibe treatment, patient's health improved. Paleness, arthritis, abdominal pain, and ecchymosis were all gone and disappeared. Abdominal ultrasound showed no splenomegaly. Her weight increased to (22 kg) which is optimal for her age. Her lab results were (Hgb 12.5 mmol/L, platelets 350 mmol/L, TC 3.5 mmol/L, LDL 1.7 mmol/L). However, plasma sterol level remains high even after the treatment. Unfortunately, plasma sterol level baseline was not obtained because the patient started ezetimibe treatment before the establishment of the diagnosis and sterols analysis.

After the establishment of the diagnosis of sitosterolemia in the patient, we examined the rest of siblings who are two: a 9 year old girl and a 12 year old boy. Surprisingly, β-sitosterol levels were very elevated in both siblings. Genetic testing was done which confirmed ABCG8 gene mutation (NM-022437.2) in a homozygous state as well (Table 3). There was no clinical manifestation apparent for the 9 year old girl yet. While there were only two small Achilles tendon xanthomas of the 12 year old boy which developed at the age of two years and did not grow or cause any complications.

Table 3: Result of sterol analysis of the family siblings

Sitosterolemia is a genetic disease with an autosomal recessive mode of inheritance confirmed by ABCG5 and ABCG8 gene responsible for ATP-binding cassette subfamily G member 5 and 8 proteins that cause a defect in plants lipid metabolism. They are responsible for intestinal and bile metabolism of the plant lipid by Neimann-Pick C1-Like1 (NPC1L1) transporters [1,2,8]. Sitosterolemia was first described in 1974 by Bhattacharyya and Connor [9]. Its prevalence is estimated to be less than 1/1,000,000 depending on about 100 literatures [10].

Clinical manifestations vary between patients and start at different ages. A reported case of a Korean girl starts having yellow plaques on the surface of her flexors at the age of 15 months [10]. Another patient started complaining of arthralgia at the age of three years with thrombocytopenia, paleness, tuberous xanthoma at the extensor surface of the knees and elbows [11]. In our case, the patient developed xanthoma for the first time at two years of age and complicated by other symptoms for the next 5 years. These symptoms include: arthritis, paleness, easily tiredness, ecchymosis and splenomegaly on ultrasound.

Sitosterolemia can be easily misdiagnosed as FH because the similarity in presentation between the two conditions. Indeed, it is thought that many sitosterolemia patients are misdiagnosed as FH. In many cases, physicians face a trigger event which made them think of other possible diagnoses other than FH. Decreased lipid level with a high range was the main event. Reiner et al. [12] presented a case with marked hyperlipidemia and were started on infliximab (Remicade) therapy. After a while, they noticed increased liver enzymes which are not consistent with FH. Therefore, they started to think of other diagnosis. In the end, they found high level of plant sterols [12]. Another recent case found to have very elevated LDL and TC levels. In this case, the patient was started on low cholesterol diet. The TC levels decreased, but remained within a relatively high range. This peculiar finding made them look for another justification which ended up being sitosterolemia [13]. In other situations, developing new manifestations or developing a complication can be the reason to look for other diagnoses. In our case, TC and LDL remained high after providing the treatment of FH. TC and LDL were decreased, but sustained within a high range. The patient developed new manifestations which was the trigger to seek another diagnosis. Therapy of FH should aim to decrease levels of TC and LDL to the normal range, and relieve the symptoms. Otherwise other possible rare diagnoses, such as sitosterolemia, should be in mind. Lastly, Kawamura et al. [14] showed a case discovered to have sitosterolemia at age of 25 after developing a serious complication, which was acute myocardial infarction.

In our case, the patient was undiagnosed for 3 years and misdiagnosed with FH for 2 years. The final diagnosis was made genetically since ABCG8 gene was positive in the child along with her brother and sister. Parents were carriers for variant ABCG8. Management of sitosterolemia consists of dietary restriction of phytosterol containing food, which include margarine, nuts, chocolates, vegetable oil, and shell fish as well as medical management with colestipol and cholestyramine which are bile acid sequestrates. Studies showed little evidence for using statins [15]. Studies showed beneficial effects of liver transplant [15].

Ezetimibe targets intestinal NPC1L1 transporter to inhibit sterols absorption. It reduces plasma plant sterol levels, corrects most of the hematological abnormalities and treats xanthomas [16-18]. After initiating ezetimibe in our patient, the level of TC, LDL, TG, RBC, Hgb, WBC and platelets were normalized. However, HDL level increased, but did not reach normal levels. In comparison with other studies, there was a discrepancy. For example, some studies did not show any significant decrease of TG while others exhibited a marked decrease of TG [17-20]. It is worth mentioning that sitosterolemia patients have high variability in TG levels which can be the reason for this debate [21-23]. Unlike our patient, level of HDL was corrected in some patients. The level of plant sterols is expected to return to the normal range. In this case, even though the patient was using ezetimibe for 12 months sterol analysis, and sterol level, especially β-sitosterol, were significantly high (Table 1). Unfortunately, no baseline sterol analysis was done before using ezetimibe to monitor its effect.

The differences between our case and former cases in clinical manifestation and lab findings may be attributed to the novel ABCG8 gene (NM-022437.2, exon 7) mutation and the state of homozygosity in this patient, which is discovered for the first time in this patient and her family. Also, it is not usual to have different presentation of the same gene mutation in the same family. Many previous mutations were discovered in a heterozygous form but did not progress to advanced manifestations as in this case. In fact, patients with the heterozygous form might get diagnosed when they develop a new complication because their disease is not severe to show early clinical manifestation [24].

Sitosterolemia is a rare genetic disorder that is misdiagnosed frequently. It should be in the differentials and appropriate genetic testing should be applied in patients with high cholesterol levels.

We would like to thank Mr. Oday Saleh Qurashi and Mrs. Cecille Cielo Selda for their help to provide valuable comments on the paper, and the patient and her family who gave the consent to publish this case.