Adult-onset cerebral adrenoleukodystrophy with history of head trauma and neurosyphilis.

Individuals with X-linked Adrenoleukodystrophy (X-ALD) may manifest symptoms of their disease following head trauma or neurologic infection. We report a case of adult-onset cerebral ALD in a 21-year-old man, who also had a remote history of head trauma and recent history of neurosyphilis. He presented with a generalized tonic-clonic seizure and left-sided weakness, along with recent weight loss, headaches, and low-grade fevers. Initial workup revealed a positive cerebrospinal fluid VDRL, and no evidence of peripheral neuropathy or endocrinopathy. Frontal lobe biopsies revealed loss of myelin staining by Luxol fast blue and white matter macrophages and T lymphocytes, consistent with a demyelinating or dysmyelinating disease. The diagnosis of X-ALD was made through detection of elevated very long-chain fatty acids. This patient’s presentation is highly unusual for someone with X-ALD. The majority of patients present either in childhood with an often-lethal inflammatory cerebral dysmyelinating phenotype, or in adulthood with a non-inflammatory distal axonopathy. Most patients who are asymptomatic during childhood do not go on to develop cerebral ALD in adulthood, especially not without first presenting with peripheral neuropathy or adrenal dysfunction. This patient’s head trauma and/or neurosyphilis may have provided the inflammatory trigger for the manifestation of the inflammatory cerebral demyelinating phenotype of X-ALD in adulthood.

X-linked adrenoleukodystrophy (X-ALD), an inherited peroxisome disorder caused by mutations in the ABCD1 gene, has a highly variable clinical presentation [1,2]. The two major phenotypes are cerebral ALD, marked by childhood-onset inflammatory cerebral demyelination that is usually lethal, and adrenomyleloneuropathy (AMN), which typically manifests in adulthood as a non-inflammatory distal axonopathy that progresses to spastic paraplegia [1,3]. Despite being a monogenetic condition, no simple genotype-phenotype correlation has been established; this suggests that additional environmental factors may influence the onset and progression of symptoms [1,2]. Reports have suggested that head trauma may initiate the onset of the rapidly progressive inflammatory demyelination phenotype in previously asymptomatic patients with X-ALD [4,5]. We report a case of adult-onset cerebral ALD in a patient with a remote history of traumatic brain injury and a recent history of neurosyphilis.

The patient was a 21-year-old male who initially presented with a generalized tonic-clonic seizure. A computed tomographic (CT) study of the head revealed right fronto-parietal edema and a possible mass. He had a history of right-sided blunt head trauma at age 14 years; a computed tomographic (CT) scan was normal at that time. His mother had been diagnosed with multiple sclerosis at age 34 years. Review of systems revealed he had recent weight loss, headaches and low-grade fevers. On examination, he was combative and had a left facial droop and mild weakness in the left arm and leg. He had no evidence of a peripheral neuropathy or of endocrine disease. Initial laboratory workup was remarkable for rare white blood cells in the cerebrospinal fluid (CSF) and a positive CSF VDRL, negative oligoclonal band testing, and an elevated syphilis IgG level and RPR titer of 1:32. Despite appropriate antibiotic therapy, serial magnetic resonance imaging studies showed expanding areas of white matter hyperintensity, starting and becoming nearly confluent on the right side and progressing to involve the left side. 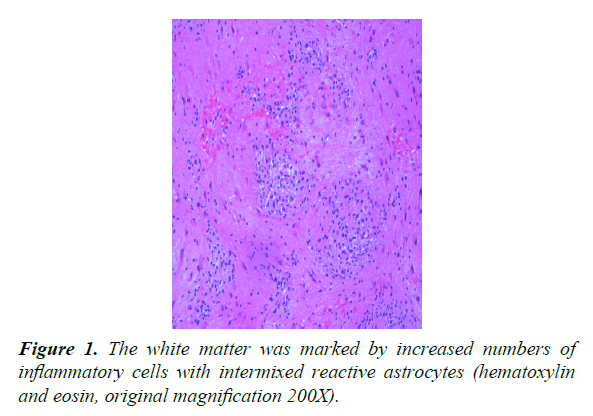 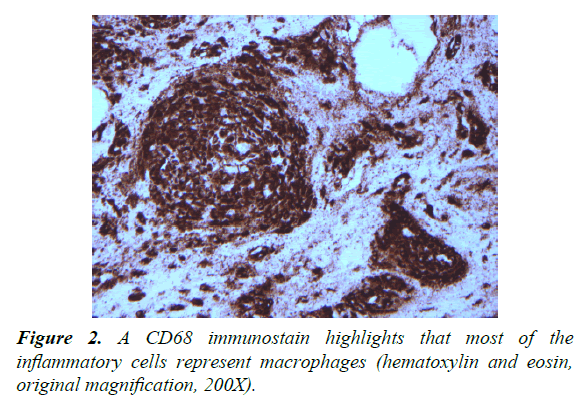 Figure 2. A CD68 immunostain highlights that most of the inflammatory cells represent macrophages (hematoxylin and eosin, original magnification, 200X). 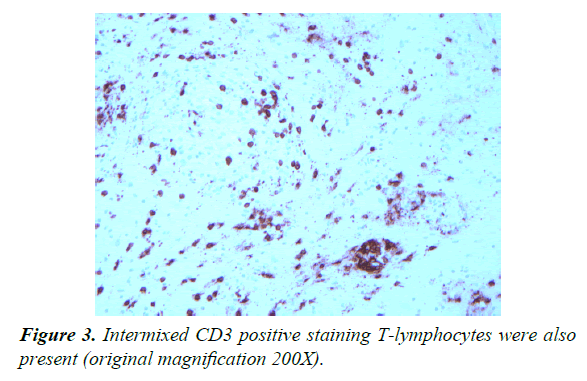 This case is unusual in that the patient presented as an adult with cerebral ALD, without any prior history of AMN-related symptoms or adrenal insufficiency. In contrast, the majority of X-ALD patients with cerebral ALD first present between ages 5 and 12 [1,2]. However, one reported case described a 21-year-old male patient who presented with seizure two years after head trauma; imaging indicated that the oldest portion of the lesion was at the original site of trauma [4]. Similarly, our patient’s lesion is ipsilateral to the original site of trauma. Some have proposed that trauma initiates the cerebral ALD phenotype through disruption of the blood-brain barrier, leading to immunologic priming against accumulating very long-chain fatty acids [3,4,6].

Regardless of trauma, it is clear that Inflammation plays a large role in the pathogenesis of cerebral ALD [2,4]. The patient’s biopsies revealed markedly increased inflammatory cells, largely comprised of macrophages and T lymphocytes, which is typical of but not specific for cerebral ALD. The close temporal relationship between the onset of symptoms and diagnosis of neurosyphilis suggests that infection could have triggered the white matter changes.

To the authors’ knowledge, this is the first reported case of adult-onset cerebral ALD in the setting of neurosyphilis. While it has been proposed that environmental factors play a role in determining the phenotypic outcome of individuals with X-ALD, more work must be done to establish causal links. In the meantime, close MRI-monitoring of known X-ALD patients who have experienced head trauma or neurological infection should be considered [4]. If caught at an early stage, allogenic hematopoietic stem-cell transplant has proven to be effective against neuroinflammatory cerebral ALD [1,2]. 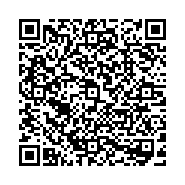