Background: Adrenal haemorrhage (AH) in the new-born is not that uncommon and has been reported frequently. AH occurs most often after a traumatic delivery or complicated neonatal course.

Methods: Medical records of neonates who had been diagnosed to have AH were reviewed. Data included age, sex, clinical manifestations, laboratory and radiological investigations.

Results: During the period under review, five neonates were diagnosed to have adrenal haemorrhage. All were term male infants, who were delivered vaginally .one baby was large for gestational age (LGA), and three babies had perinatal hypoxemia. Clinical symptoms were not specific and diagnosis was confirmed by performing abdominal sonography (USG).

Conclusion: AH should be recognised in the new-borns with nonspecific symptoms who had potential risk factors. Abdominal ultrasonography (USG) should be performed to diagnose AH, and monitor its progress. Adrenal hormone testing also should be performed.

Adrenal haemorrhage (AH) is a relatively rare disorder with variable and non-specific presentation which may cause acute adrenal crisis, shock, and death if not recognized early and appropriately treated [1-3].

AH may occur at any age, with non-traumatic bilateral extensive AH more often in the elderly at the time of acute stressful situations. In contrast, patient with traumatic AH typically occurs in children and adolescent patients with adrenal haemorrhage may die because of underlying disease or associated complications. The mortality rate was estimated to be approximately 15%. However, this could be varying with the severity of the underlying disorder. For example, in patients with waterhouse Friderichson syndrome occurring with sepsis has even a higher rate [4-8].

The diagnosis should be suspected in any stressful situations like in the post-operative period, pregnancy, or in presence of a coagulopathy in conjunction with hypotension, and electrolyte disturbance. Also it is known to be associated with antiphospholipid syndrome, amoebic liver abscess, and bacterial sepsis [9-14].

AH in the new-born is a well described entity and has been reported frequently. It occurs during the first weeks of life. The haemorrhage occurs most often after a traumatic delivery or neonatal course complicated by hypoxia, hypertension or coagulopathy [15-18].

In this article, we report five patients with adrenal haemorrhage (AH) in the neonatal period who were diagnosed and confirmed by abdominal ultrasonography (USG). The clinical management and outcome were also discussed.

This retrospective hospital based study was conducted in newborns who were diagnosed to have AH at King Khalid University Hospital (KKUH), Riyadh, Saudi Arabia during the period January 2014 and July 2018. Medical records were reviewed for demographic characteristic, clinical presentation and predisposing causes. Laboratory and radiological investigation were extracted. Ultrasonography (USG) was performed at the time of diagnosis and for follow up to determine the resolution time. Random serum adrenocorticotrophic (ACTH) and cortisol were performed supplemented by short synacthen test (ACTH stimulation test).

Five neonates were diagnosed with adrenal haemorrhage in the period between January 2014 and July 2018. All were term male infants who were delivered vaginally. One large for gestational age, birth weight was 4.510 g, and three had perinatal hypoxia.

Clinical presentation was non-specific; however, abdominal ultrasonography (USG) (Figures 1 and 2) suggested the diagnosis. Two babies showed signs and symptoms of adrenal insufficiency which were confirmed by hormonal testing. They were treated with glucocorticoids therapy. 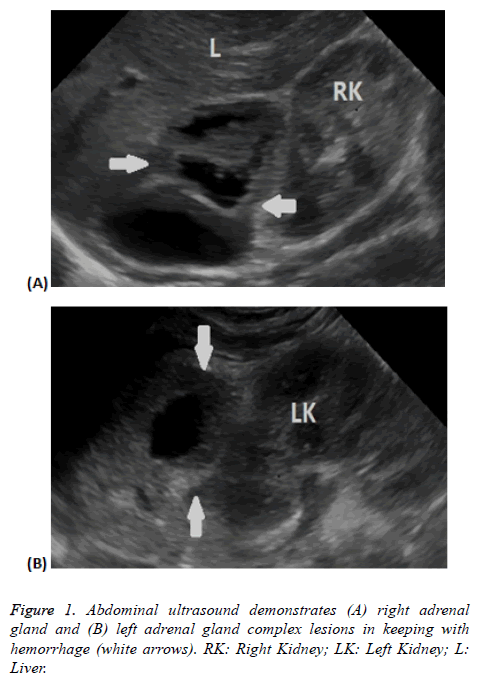 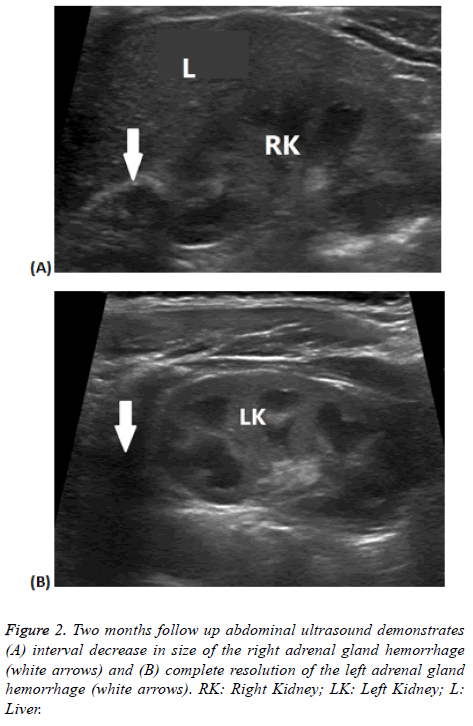 Demographic characteristics, presenting symptoms, predisposing risk factors and laboratory data were shown in Table 1. The haemorrhage resolved within a mean of 12.6 w (range: 8-20).

Adrenal haemorrhage (AH) is relatively a frequent finding in the term male infants delivered vaginally. The incidence of AH ranges from 1.7 per 1000 autopsied new-born infants to approximately 3 % of infants subjected to screening by abdominal ultrasonography (USG). The reason for such a high incidence being the large size of adrenal gland relative to body weight. The gland is almost two times larger. Also, fifty to sixty arterial branches from the three suprarenal arteries supplying the gland. This is highly vascular supply drains into medullary sinusoids via relatively few venous channels, thereby creating a potential vascular damage. Any condition leading to reduce oxygen supply (hypoxia) may lead to shunting of blood flow, and damage to endothelial making them more prone to haemorrhage, an example of this is congenital adrenal hyperplasia [1-3,16-29]. The most important predisposing cause of AH were birth trauma, prolonged labour, intrauterine infections, perinatal asphyxia or hypoxia, large birth weight, septicaemia, and haemorrhagic disorders.

The clinical manifestations of A.H. vary from asymptomatic to life threatening conditions with hypovolemia, hypotension and shock. The clinical presentation in our series was nonspecific. However, persistent neonatal jaundice, flank mass, scrotal swelling and haematuria, anaemia, hypo or hypertension, cyanosis, urinary tract infections and may be adrenal insufficiency with shock. The most common presentation includes neonatal jaundice, due to the breakdown of red blood cells in the hematoma [1,5-7,15-18,21-31]. The nature of adrenal haemorrhage, in this series was bilateral. In contrast to Ruminiska et al. [16] who reported the predominance of right - sided haemorrhage and Demirel et al. who showed that right sided adrenal haemorrhage being the most common (72.2%) in 33 patients. Two infants developed adrenal insufficiency requiring steroid therapy. This was similar to other reports [1,16-18,23,32].

AH should be considered in the differential diagnosis of abdominal flank mass. It may be extremely difficult to differentiate AH from renal pathology such as hydronephrosis, cystic renal disease, vascular thrombosis, or a neuroblastoma. Abdominal ultrasound (USG) may help to differentiate a haemorrhage from other pathology [5,33]. Serial USG will show an interval of resolution of A.H., but persistence or enlargement of the mass might indicate other pathology. Ultrasonography also might diagnose prenatal adrenal gland haemorrhage [34]. The resolution time of 12.6 w (range: 8-20) is comparable to what have been reported [16,18,23]. Furthermore, with the modern imaging particularly computed tomography (CT)-and magnetic resonance imaging (MRI) the diagnosis of AH is frequently made easily [35-37]. Positron emission tomography (PET) scan could be of value in diagnosis [38].

In conclusion AH should be suspected in the new born infants with non-specific symptoms who had potential risk factors. Abdominal ultrasonography (USG) should be performed to diagnose the condition of AH, and monitor its prognosis. Furthermore adrenal hormone testing is also important.

The authors would like to thank Miss Hadeel N. Al-Jurayyan for her help in preparing the manuscript.