Acute and chronic effects of opiates and dopamine on yawning, penile erection and genital grooming behaviors in male Wistar rats

Yawning is a contagious event that occurs alone or associated with stretching and/or penile erection. The aims of the present study were to compare acute and chronic effects of opiates and dopamine on yawning, penile erection and genital grooming behaviors in male Wistar rat. Sixty four male rats were divided into eight groups and received, normal saline (control group), Apomorphine-HCl (Apo, 0.08 mg/ kg), haloperidol (Hal, 0.1 mg/kg), naloxone-HCl (Nal, 1 mg/kg), morphine-HCl (Mor, 5 mg/kg), Apo +Nal, Apo+Mor or Nal+Hal. After acute phase (day 1) and the chronic phase (day 14), rats were observed for the entire duration of the experiment (60 min) at 10-min intervals in order to count penile erection, yawning episodes and the time spent on genital grooming. Previous administration of morphine and naloxone inhibited and increased the apomorphine effects, respectively (P<0.05). Also, naloxone and morphine were adverse and the previous acute administration of haloperidol decreased the naloxone effect; but previous chronic administration of haloperidol increased the naloxone effect. Our findings may explain the opiates and dopamine roles on yawning, penile erection and genital grooming behaviors in rat as a model for human studies.

Yawning is a phylogenetically old, stereotyped event that happens under different conditions alone or associated with stretching and/or penile erection with a low frequency in humans, in animals from reptiles to birds and mammals [1]. In rats and non-human primates yawning is androgen-dependent and sexually dimorphic, with more common in males than females [2]. Yawning occurs associated with increased electroencephalographic activity of the cortex, it has been also suggested that yawning is an ancestral vestige survived through evolution that occurs when attention is low and arousal needs to be increased [3]. Yawning is also contagious, as it can be also evoked in humans or non-human primates by a yawn produced by another subject of the same species. This led to suggest that yawning may be linked to empathy [4-7]. Neuropharmacological studies revealed that various neurotransmitters and neuropeptides are effective on yawning.

The best known are adrenocorticotropin, α-melanocyte stimulating hormone (MSH) and related peptides, acetylcholine, dopamine, serotonin, excitatory amino acids, oxytocin, gamma-amino butyric acid (GABA) and opioid peptides [8]. Some of these interact at the level of the paraventricular nucleus (PVN) of the hypothalamus in the control of this behavioral response [1]. Dopamine is one of the most studied neurotransmitters involved in the control of penile erection and sexual behavior [9]. Accordingly, dopamine receptor agonists increase penile erection and facilitate copulatory behavior in rodents and also in other mammals including non-human primates [10-13]. On the other hand, opiate interactions with both dopaminergic and cholinergic systems have been demonstrated [14]. A close association between opiate receptors and dopaminergic cell bodies and nerve endings in the substantia nigra [15] and striatum [16] were also reported. Therefore, the aims of the present study were to compare acute and chronic effects of opiates and dopamine drugs on yawning, penile erection and genital grooming behaviors in male Wistar rat. In view of interaction between opiates and dopaminergic, the current study aimed to investigate whether the yawning is associated with genital grooming and penile erection, and quantify these responses and possible involved pharmacological mechanisms of action.

Apomorphine-HCl, haloperidol, naloxone-HCl, morphine-HCl were purchased from Sigma (Germany). All other reagents were from available commercial sources.

Sixty four adult male Wistar rats (250-300 g) were randomly allocated in groups of 3-4 under-controlled conditions of 23 ± 1°C temperature and 12 h light/dark cycle (lights on at 08:00), with ad libitum access to food and water. All experimental procedures were carried out between 09:00-13:00 h and were approved by the Animal Experimentation Ethics Committee of the University. Every effort was made to minimize animal suffering and the number of animals used.

Apomorphine, morphine, and naloxone were dissolved in normal saline. Haloperidol was dissolved in a drop of acetic acid, diluted with distilled water and adjusted to pH=4.5-5.0. All the compounds was given intraperitoneally (IP) in a volume of 0.5 ml per animal with the exception of apomorphine that were given subcutaneously (SC) in a volume of 0.2 ml per animal. The controls received the same amount of vehicle as SC.

Rats fasted for 4 h were kept in isolated observation cages and allowed to adapt to the acoustically isolated experimentation lab. After this period, the animals were divided into eight groups and received, normal saline (control group), apomorphine-HCl (Apo, 0.08 mg/kg), haloperidol (Hal, 0.1 mg/kg), naloxone-HCl (Nal, 1 mg/kg), morphine-HCl (Mor, 5 mg/kg), Apo+Nal, Apo+Mor or Nal+Hal. After a 30 min habituation period, rats were treated with drugs. Morphine and naloxone were administered 15 minutes before apomorphine in groups receiving Apo+Nal and Apo+Mor. Injections were continued until the fourteenth day, and the mentioned compounds were prepared each day before the injection. Apomorphine [17], haloperidol [18], morphine and naloxone [19] had been already used chronically. Rats were placed individually in Plexiglas cages (30 cm × 30 cm × 30 cm). After acute phase (day 1) and the chronic phase (day 14), rats were observed for the entire duration of the experiment (60 min) at 10 min intervals in order to count penile erection, yawning episodes and the time spent genital grooming. Penile erections were scored when the penis emerged from the penile sheath, which was usually accompanied by penile grooming and hip flexions. Yawning episodes were defined as an opening of the mouth of at least 1-3 s of duration occasionally accompanied by stretching. Behavioral responses were recorded by an observer who was not aware of the treatments done.

The data were expressed as mean ± standard error of the mean. The parameters were evaluated by analysis of variance (ANOVA), followed by Tukey’s test. The differences among the groups were assessed by Student’s t test, with a significance level of P<0.05.

Figure 1: Kinetics of apomorphine effects acute administration on yawning (A), erection (B) and genital grooming (C) recorded every 10 min along 60 min period of time. Rats were injected with apomorphine (0.08 mg/kg, SC), in the absence and presence of the opioid agonist, morphine (5 mg/kg, IP). Significant differences in comparison to the control and apomorphine groups are indicated by * and #: P˂0.05, respectively. 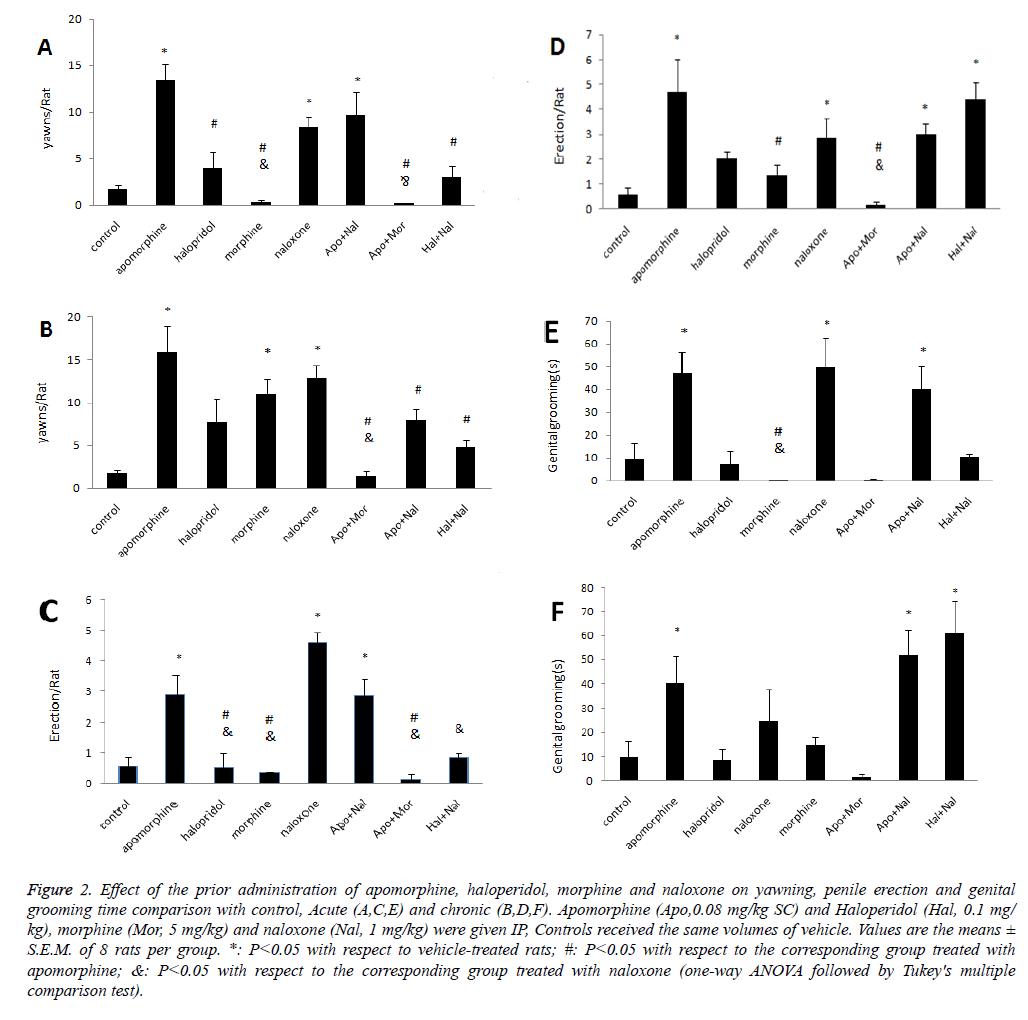 Figure 3: Comparison of acute(Black) and chronic(Red) adminstriation of various drugs on the yawning, erection and genital grooming time. Apomorphine (Apo, 0.08 mg/kg SC), and Haloperidol (Hal, 0.1 mg/kg), morphine (Mor, 5 mg/kg) and naloxone (Nal, 1 mg/kg) were given IP, morphine and naloxone were given 15 min before apomorphine. Data represent means ± SEM of 8 rats per group. *: P˂0.05.

It has been reported that different agents such as several neurotransmitters and peptidergic hormones induce concomitant yawning, penile erection and genital grooming [20]. The involvement of the dopaminergic system in the induction of yawning and genital grooming becomes evident through the administration of small doses of apomorphine, a direct DA receptor agonist, with marked affinity for DA D2- like (D2/D3/D4) receptors [21,22]. Furthermore, many dopaminergic antagonists such as haloperidol have been shown to be effective in inhibiting these behaviors [23]. In the present study, apomorphine-induced yawning was inhibited in a naloxone sensitive manner by morphine. Although the nigrostriatal pathway has been shown to be regulated by μ- and δ-opioid receptors in the striatum and the substantia nigra [24], such a mechanism is unlikely to explain the present results since morphine in a similar dose range also inhibited dopamine receptor-mediated yawning. Morphine is able to inhibit the release of acetylcholine in the central nervous system in a naloxone-sensitive manner [25] and this can be explained in our findings that morphine was able to inhibit the yawning induced by the direct acting dopamine receptor agonist, as well as that induced by apomorphine. The most likely explanation of the present findings is that morphine inhibits yawning induced by dopamine agonists and drugs acting at an opioid site downstream from the dopamine receptors. The weak but dose-dependent induction of yawning by naloxone suggests that endogenous opioids may mediate a tonic inhibitory effect on yawning behavior. In fact, morphine reduced drug-induced yawning, an effect which is probably due to sedative side effects [22]. It can be concluded that the naloxone-androgen interaction is not mediated via an opiate receptor or, if it is, then it is a subtype of opiate receptor for which morphine is not sufficiently selective. The best known central neurotransmitters and neuropeptides include serotonin, dopamine, oxytocin, excitatory amino acids, NO, adrenocorticotropin, MSH, and opioid peptides control penile erection by acting in several brain areas [26]. It seems the PVN have a central role and NO and oxytocin to be main players in the mediation of the effects. NO seems to be involved in the expression of opioid antinociception, tolerance and dependence, so between opioids and NO have been shown interactions [27]. In normal rats morphine and haloperidol blocked apomorphine-induced penile erections whereas naloxone enhanced the response [28]. Since there is no evidence to suggest otherwise, it is possible that the inhibition of apomorphine-induced yawning, penile erections and genital grooming in normal rats by morphine as an opioid receptor agonist in acute and chronic phase is due to direct interaction between dopamine and opiate receptors. Haloperidol at the chronic dose have an enhancing effect on penile erection compared to acute dose. The enhancing effect may be explicable in terms of postsynaptic blockade of dopamine receptors by haloperidol there by preventing inhibition by dopamine on the cholinergic neurons [29]. We found significant higher yawning in response to morphine administration, higher penile erection in response to Hal+Nal, morphine and haloperidol administration and higher genital grooming in response to Hal+Nal consumption in chronic against acute administration. Other changes in response to other treatments were also found but they were not statistically significant. No studies were existed about the comparison of acute and chronic effects of opiates and dopamine on these behaviors. Therefore, the possible underlying mechanism cannot be discussed. However, central and possible peripheral actions of opiates on their receptors and differences in time of actions may be the possible reason. These need future clarification in further studies.

Acute and chronic adminstriation of morphine, an opioid receptor agonist, reduced almost completely penile erection, yawning and genital grooming induced by apomorphine. So there is interaction between dopamine and opiate receptors. Injecting morphine in chronic phase only enhances number of yawning. These results may be explained by the ability of opioid receptor agonists to markedly decrease oxytocin neurotransmission at central and posterior pituitary level. Dopamine in turn increases central oxytocinergic neurotransmission, leading to penile erection and yawning, as already suggested for apomorphine and other dopamine receptor agonists. Compounds enhancing yawning would probably increase the penile erection and genital grooming time behaviors in rat.

The present research was carried out with the support of Damghan Islamic Azad University. We are grateful of the gonabad University of Medical Sciences assisting us to carry it out.